Invasive organisms become pests, in part, because they escape control of their natural enemies that regulate population growth in areas where the invader is native. Biological control attempts to re-associate host specific natural enemies with target pest populations to reduce pest populations to less damaging levels. Dr Mark Hoddle of the Department of Entomology and his colleagues at the Center for Invasive Species Research, both at UC Riverside, work on invasive invertebrate pests in California, and develop biological control programs targeting them. This approach can be highly effective, eliminating the need for pesticides, and providing permanent pest control.

Dr Mark Hoddle’s interest in insects started at a young age, rearing mantids (Orthodera novaezealandiae) in his native New Zealand. ‘The subsequent mass production of baby mantids inadvertently lead to me executing my first biocontrol program – releasing these tiny nymphs onto Mum’s whitefly infested fuschias!’ he tells us. During his undergraduate course lectures in basic insect biology, ecology and taxonomy, as well as Integrated Pest Management, Dr Hoddle built upon this interest and started to consider entomology as a career option. It was then that he realised, ‘you could actually get a job doing the things I like doing for fun!’ Since 1997, Dr Hoddle has worked as an Extension Specialist in biological control in the Department of Entomology and later as the Director for the Center for Invasive Species Research, both at the University of California, Riverside.

One of the main focuses of Dr Hoddle’s work is developing biological controls for high risk invasive agricultural pest species like the glassy-winged sharpshooter (Homalodisca vitripennis), and when possible, eradicating incipient pest populations such as highly destructive palm weevils. Palm weevils have long been considered a pest species in Asia, where some species originate. In particular, the red palm weevil (Rhynchophorus ferrugineus) has killed millions of Canary Island palms and date palms, and is widely considered to be one of the most damaging insects to palm trees in the world. The closely related Rhynchophorus vulneratus from Indonesia, is also a palm killer in its native range. 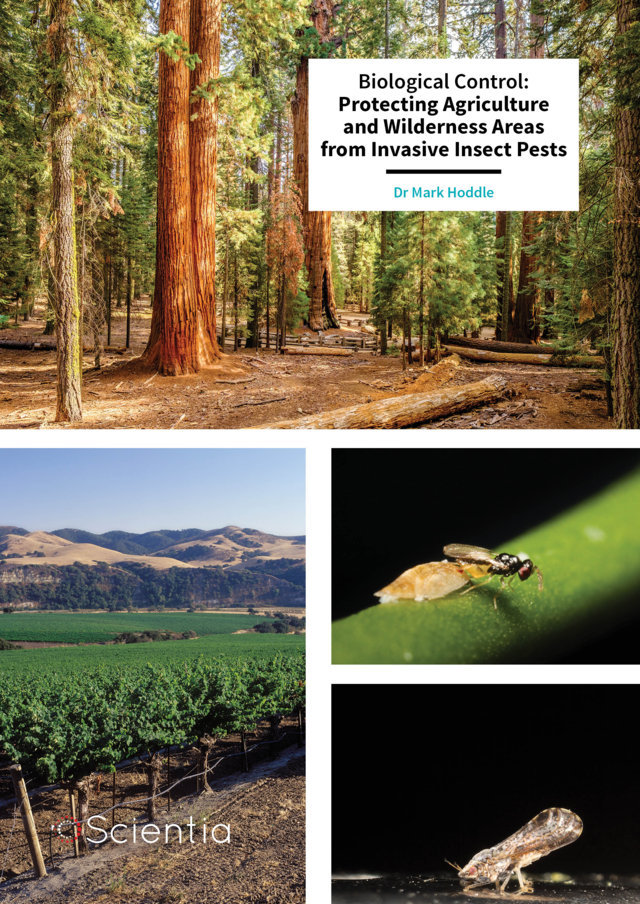 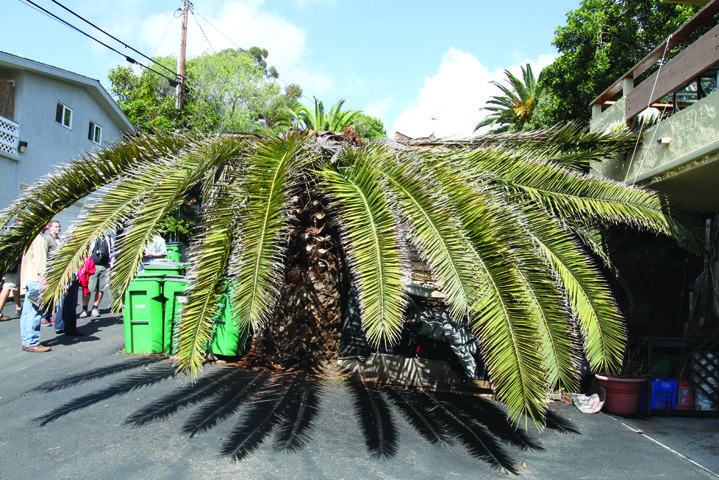 ‘The ultimate goal of a successful biological control program is reducing pest populations to less damaging levels, perhaps to the level where pesticides, for example, are no longer needed. This is good for the environment, and for agriculture as it saves the farmer money on pest control.’

Measuring between 35 and 40 millimetres, this beetle species has several different colour morphs. One variety is black with a distinctive red stripe on the dorsal side of the thorax, and in 2010, a live male weevil with this colour pattern was found in a dead canary palm in Laguna Beach, California. Dr Hoddle and his colleagues identified this weevil as R. vulneratus using DNA analysis, contradicting the previous identification of the weevil as the closely related R. ferrugineus. 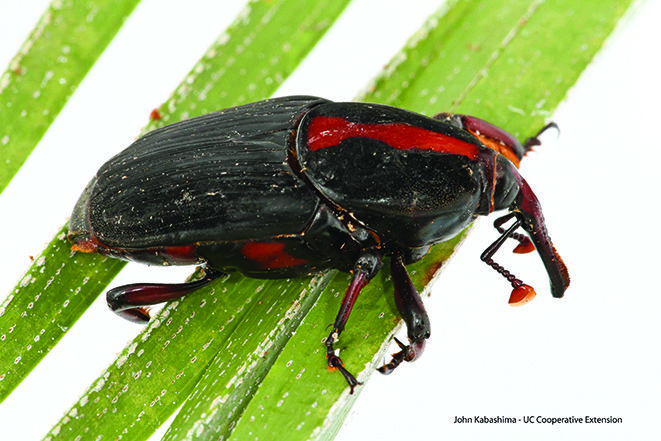 In California alone, the ornamental palm industry is worth $70 million, while the date industry has an estimated value of $68 million per year. Thus, it was important to act quickly to reduce the spread of this damaging palm pest. Dr Hoddle and his colleagues demonstrated that the species of palm weevil in Laguna Beach was highly attracted to two volatile compounds – odours from damaged palm trees and aggregation pheromones released by male weevils that attract more weevils (male and female) to infested palms. The team placed synthetic versions of aggregation pheromones into buckets with fermenting fruit to attract weevils, which upon entering the trap weevils fell into an anti-freeze solution and drowned. The use of pheromone traps, together with insecticides and the destruction of weevil-infested palms led to the extermination of palm weevil populations, and successful eradication was declared in January 2015.

Biological control research targeting invasive pest species has wide ranging impacts, and helps to protect a range of our favourite food and drink products, such as avocados, wine grapes, dates, and olives. ‘On average, California gets about nine new arthropod species establishing in the state per year,’ Dr Hoddle tells us. ‘About 33% of these become pests of environmental and/or economic significance.’ Alongside his colleagues, Dr Hoddle has studied the impact of one particular pest of economic importance – the avocado thrips (Scirtothrips perseae), which infests 95% of avocado acreage in California. Up to 80% of acreage may require pesticides at certain times; however, as recent evidence continues to confirm the negative environmental impact of commercial pesticides, new biological control methods may be needed to replace them. To do this, Dr Hoddle and his team explored Mexico, Guatemala, Costa Rica, the Caribbean and Brazil, to delineate the native range of the avocado thrips, with the intent of finding its natural enemies. They discovered that the most commonly occurring natural enemies associated with avocado thrips in its home range are predatory species of thrips (Franklinothrips spp. and Aeolothrips spp.). These wide ranging surveys identified several other species of thrips that have the potential to become severe pest species for avocado if they ever arrived in California. 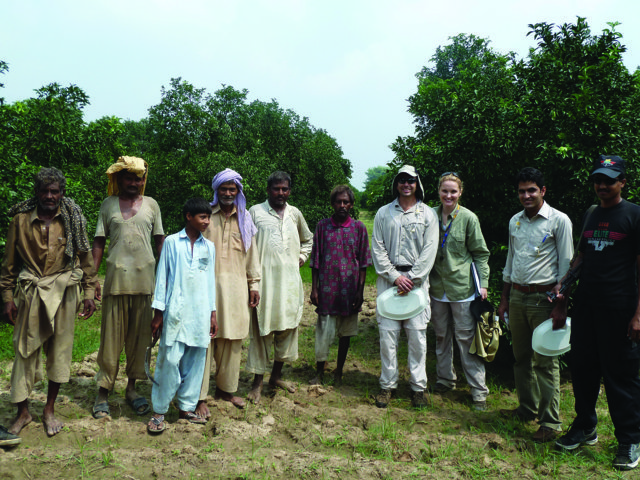 A novel approach to managing invasive pests is to identify and anticipate potential problems in advance of their arrival, and proactively develop management plans before incursions occur. An obvious target in this regard is the highly destructive avocado seed moth, Stenoma catenifer. Multiyear work carried out by Dr Hoddle and his wife Christina in Guatemala resulted in the discovery of its sex pheromone, which turned out to represent a previously unknown class of natural compound. After carrying out these surveys in Guatemala, and later Peru, the team developed comprehensive inventories of natural enemies, predominantly parasitoids (wasps and flies), that parasitise and kill moth larvae and pupae. Identifying both the Stenoma sex pheromone and the natural enemies of this notorious pest, in advance of it potentially invading California, is an invaluable insurance policy protecting California’s $275 million per year avocado industry.

In the 1980s, the glassy-winged sharpshooter was accidently introduced to California from its native range, the south-eastern US, most likely through the import of infested nursery plants. Individual adult sharpshooters ingest 100 times their body weight in fluid from the xylem of plants, whilst also being a vector for the xylem-dwelling bacterium Xylella fastidiosa. This bacterium causes several lethal plant diseases, most notably Pierce’s disease, which impacts both wine and table grape varieties. Pierce’s disease occurs when X. fastidiosa blocks the xylem of the plant, preventing water flow and resulting in disease symptoms such as scorched leaves, which can eventually lead to plant death 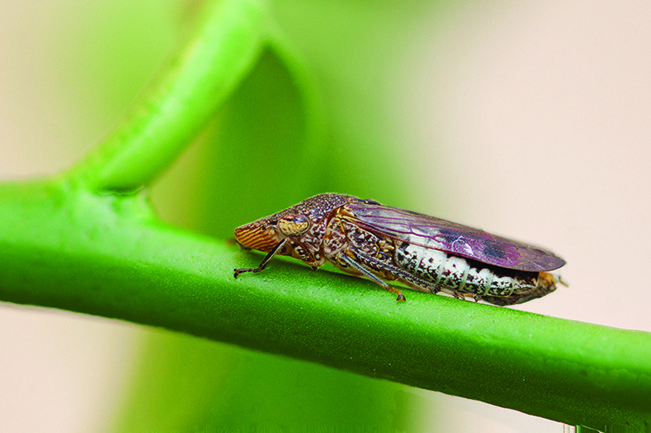 Since its initial introduction into California, the glassy-winged sharpshooter population increased, as did plant diseases associated with feeding insects. In 2000 alone, $6.9 million USD was spent on pesticides in an attempt to manage populations, in response to grape losses in San Diego and Riverside Counties due to X. fastidious related diseases, which were estimated in excess of $37 million USD. As glassy-winged sharpshooter populations continued to increase in California, the pest was inadvertently exported to Hawaii and French Polynesia through trading live plants. Populations in French Polynesia reached exceptionally high densities, far greater than anything observed in California. Subsequently, the glassy-winged sharpshooter spread from French Polynesia to Easter Island and the Cook Islands. This pest needed to be urgently controlled, and biological control was identified as the strategy most likely to provide significant and environmentally acceptable pest suppression. Natural enemies, in particular parasitoids that attack glassy-winged sharpshooter eggs, were considered excellent candidates for use in a biological control program targeting this pest. Dr Hoddle and his colleagues quickly identified a key candidate – Gonatocerus ashmeadi.

The Asian citrus psyllid (ACP), Diaphornia citri, is a citrus pest with global notoriety because it acts as a vector for a bacterium that causes a lethal and incurable citrus disease called huanglongbing (HLB). ACP-HLB has had a devastating impact on Florida citrus production, and California growers are worried about a similar outcome affecting them, as ACP and HLB are now established in many urban areas in California.

In response to the threat that ACP-HLB poses to commercial citrus in California, a $3 billion (USD) industry, Dr Hoddle and Christina Hoddle undertook a biological control program to target it. To do this, they needed to work for extended periods of time in Punjab Pakistan – part of the native range of ACP. In collaboration with Pakistani colleagues at the University of Agriculture Faislabad, they searched for and identified natural enemies of ACP that could be imported into California under permit for safety evaluations in quarantine. Two parasitoids, Tamarixia radiata and Diaphorencyrtus aligarhensis, which attack and kill different developmental stages of ACP nymphs were identified and approved for release by federal regulators. One of these parasitoids, T. radiata, established readily and spread rapidly by taking advantage of the widespread and dense ACP populations that were infesting urban citrus. This parasitoid, in combination with predatory insects like syrphid fly larvae, have greatly reduced ACP densities, and have probably contributed to its reduced spread in California. However, there is much more work to be done on this problem to prevent a catastrophe similar to that seen in Florida.

The goldspotted oak borer (Agrilus auroguttatus) is a beetle native to southern Arizona, which was first detected in California in 2004. By 2008, it was found to be adversely affecting three species of ‘red oak’ in the Cleveland National Forest, San Diego. Many infected oaks are large and very old, and as such a keystone species, their loss severely impacts biodiversity. Dr Hoddle and his colleagues collected data on the origin, biology and life history of the goldspotted oak borer, including information on its natural enemies. They also investigated its flight capabilities, including the total distance flown, by using a computerised flight mill. To estimate the distances that insects are capable of flying, entomologists attach insects to the arm of the flight mill, which rotates on a near frictionless spindle. As the insect flies, the arm of the mill rotates on this spindle and a computer records distances flown. 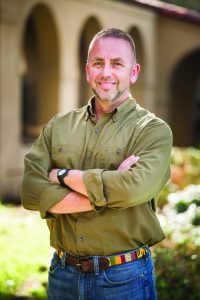