Diseases of agricultural animals are of major concern to people around the world, and thus a principle focus of many research programs. Research on the Bovine Leukaemia Virus (BLV) has been often overshadowed by other diseases that affect cattle, but new evidence suggests that the virus may be more damaging to US cattle than anyone had initially realised. PhD candidate Meredith Frie and colleagues at Michigan State University are working to understand how BLV impacts animal health, in the hope of curbing the spread of the virus for happier, healthier cattle.

Flying Under the Health Radar

Worldwide, diseases that afflict agricultural animals cause massive economic losses and present huge barriers to animal health and welfare. Bovine Leukaemia Virus (BLV) is a common virus of cattle that causes lymphoma tumours in roughly 5% of the animals that contract the virus. These tumours can appear many places in the body and may account for nearly 14% of beef cattle and 27% of dairy cattle meat rejections. Although tumours only occur in a low number of infected animals, approximately 30% of infected cattle experience persistent lymphocytosis – characterised by extremely high numbers of lymphocytes circulating in the blood – a symptom that is commonly associated with impaired immune function.

The virus was only discovered in the late 1970s and is still poorly understood. It is known that the virus can be transmitted through bodily fluids, and the most common way it is spread may be during procedures where hypodermic needles or exam gloves are reused on multiple cows, along with dehorning, tattooing, fly bites, and young calves consuming milk from infected mothers. It is still unclear whether or not the virus may be transmitted during breeding or other common farm activities. While the most obvious effects of the disease have been noted in cows with tumours, the more hidden symptoms of BLV have only just begun to come to light through recent research efforts.

BLV has largely been eradicated throughout most of Europe following aggressive measures taken by 21 countries to eliminate the virus, through strict testing and culling of infected animals. However, millions of animals in the United States are infected – at least 83% of all US dairy cattle herds contain at least one infected individual, with infection rates within a herd typically ranging from 25 to 50%. Given these rates, it is predicted that nearly 40% of all dairy cattle in the US are infected with the virus. 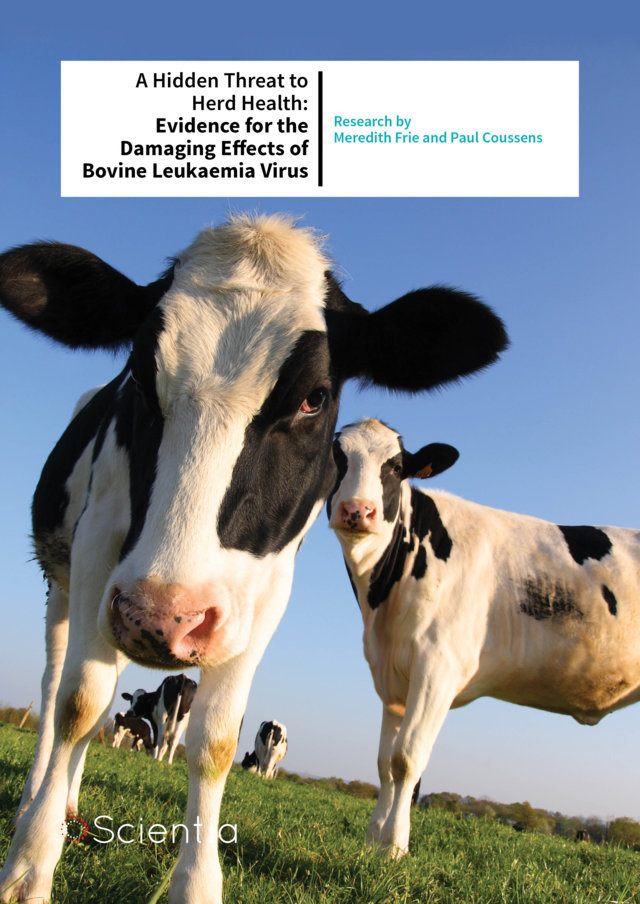 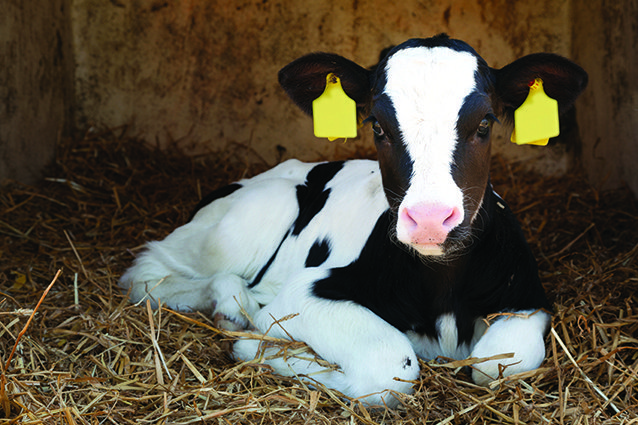 ‘That is the real, ultimate goal of all of this research – to be able to contribute to a positive change in the industry that leads to reduced BLV infections and, hopefully, happier, healthier and more productive dairy cows.’

Since its discovery, BLV has largely been ignored in the US due to the initial belief that the virus seldom causes disease, as lymphoma occurs in such a small number of cases. Despite the low rate of cancer occurrence, there is a serious economic cost of the virus – studies by Michigan State University’s BLV research team suggest that approximately $520 million dollars are lost in the US due reduced milk production and shorter life spans of BLV-infected cows. Recent work by PhD candidate Meredith Frie and her thesis advisor Dr Paul Coussens in the BLV research team indicates that the virus may have additional health consequences beyond the potential for cancer, particularly reduced immune function, suggesting the need for control measures for the disease in the United States. 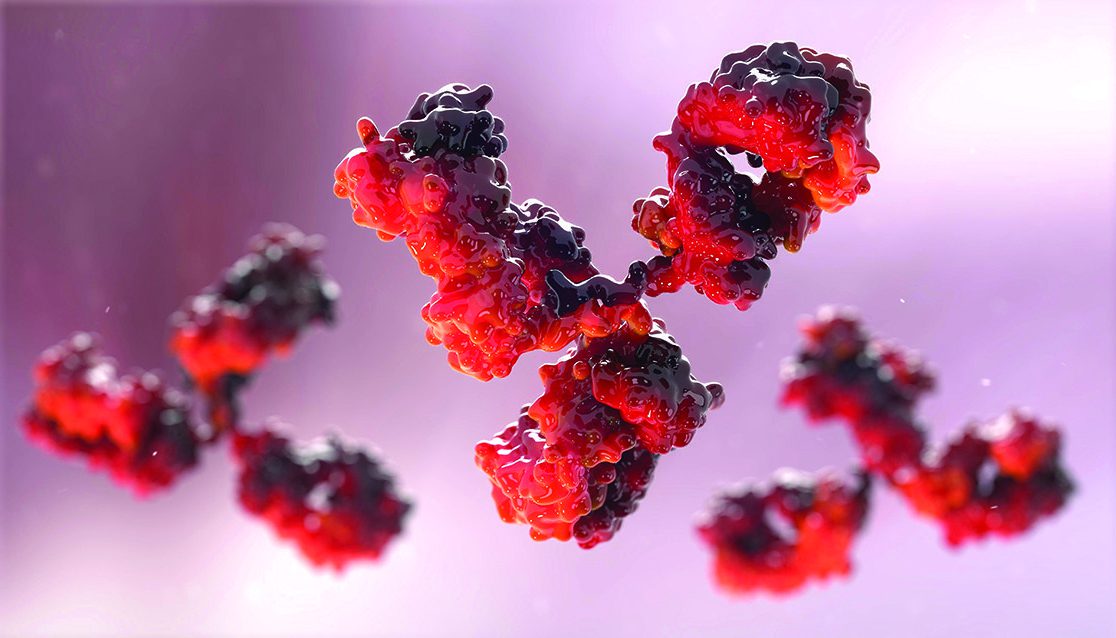 Antibodies are essential components of the adaptive immune system. When the adaptive immune system is suppressed, such as in human patients with HIV/AIDS, individuals are highly susceptible to serious infections that an individual with a healthy immune system would easily clear. Frie and Coussens predicted that, beyond occasional cancer cases, the unmeasured cost of BLV was reduced adaptive immune function in infected animals. This effect of the virus could help explain why infected cattle with no cancer symptoms still produce less milk and live shorter lives. ‘BLV is a close relative to HIV and we think it might pose a similar risk in terms of cattle health,’ Frie explains. ‘We suspect that BLV interferes with the immune system and makes BLV-infected cows more at risk for getting other infections that can be really detrimental to their health and their ability to produce high quality milk.’

Just as in humans, when immune function is suppressed in a cow, they are likely to be more susceptible to other diseases and BLV-infected herds spread destructive illnesses more quickly, with greater impact to animal health, wellbeing, and milk production. Further, it has been advised that BLV-infected cattle are less responsive to vaccinations and may not develop the same full immunity as a healthy cow when a vaccine is administered. While recent laboratory work with immune cells isolated from the blood of BLV-infected cattle has suggested that the components of their immune system demonstrate abnormal behaviour in response to pathogens, the immune response of BLV-infected animals has not been measured in live cattle in real world conditions. Thus, Frie and Coussens set out to test if infected cows mounted a less robust adaptive immune response than healthy cattle when exposed to common immune challenges, with funding from the USDA, Michigan Alliance for Animal Agriculture and the Michigan Milk Producers Association. 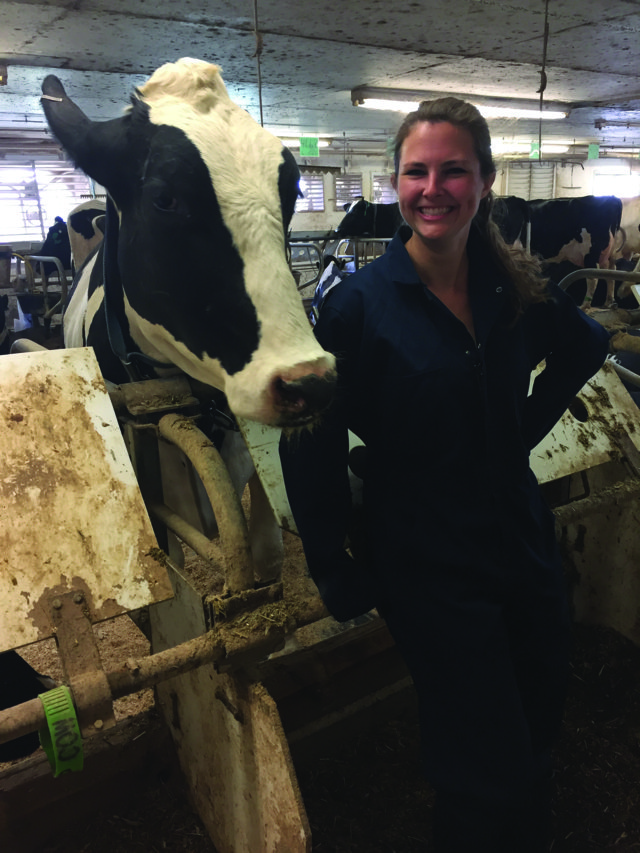 In her first experiment, Frie examined the adaptive immune response of both BLV-positive and BLV-negative adult dairy cows when given a standard vaccination booster. Dairy cows are given a wide range of vaccinations to ensure that diseases are not able to easily spread through the herd. Frie and her colleagues, particularly Dr Kelly Sporer, looked at the response to a common multiple pathogen cattle vaccine that contains five viral strains and five bacterial strains, and is typically given at multiple time points throughout a cow’s life. The cows in the study had already received initial vaccinations at a young age and were observed receiving a regular interval booster after at least six months had passed since their last dose.

The team collected blood samples the day before vaccination, and at days 7, 14 and 28 following vaccination, in order to observe how levels of adaptive immune system indicators fluctuated in response to the booster. From the blood, they isolated white blood cells and antibodies associated with the diseases present in the vaccine. They found that in BLV-infected cows, there was diminished white blood cell activity, and when these cells were cultured in the laboratory they showed abnormal responses to stimulation. BLV-infected cows also showed much lower levels of antibodies specific to the pathogens in the vaccine, indicating that their adaptive immune system had not responded as well to the vaccination as healthy cows. The results of this study strongly support the idea that BLV-infection impairs the adaptive immune system’s ability to mount an appropriate response to a vaccine.

In their first study, Frie and her colleagues demonstrated how BLV-infected cows responded to a familiar immune challenge – a vaccine they had received multiple times prior to the study. In the second experiment, they wanted to observe how the adaptive immune system of BLV-infected cattle responds to a completely novel immune challenge, and how the response changes with a second exposure. For this study, the team needed to create an immune response to something the cows had never encountered before, but that would not be dangerous and degrade their long-term health. They chose keyhole limpet hemocyanin (KLH) – a protein collected from sea creatures that the mammalian body responds to in a similar way as it would to an actual pathogen by producing antibodies, and that a Midwest dairy cow would never have encountered in its regular life.

Frie and her colleagues injected 10 BLV-infected and 10 BLV-negative cows with KLH and observed their immune response over the next 28 days. Fifty-six days after the first exposure, they injected the same cows with KLH again and observed their response for another 28 days. The team found that following both the initial and secondary exposure, BLV-infected cows had lower levels of white blood cells and lower levels of KLH-specific antibodies. They also discovered that these white blood cells performed abnormally when cultured in the laboratory. Further, the viral load of BLV in infected cows increased following the exposures, indicating that the virus took advantage of the immune system fighting the KLH for its own gain. These results provide further evidence that BLV significantly impairs the immune systems of infected animals. 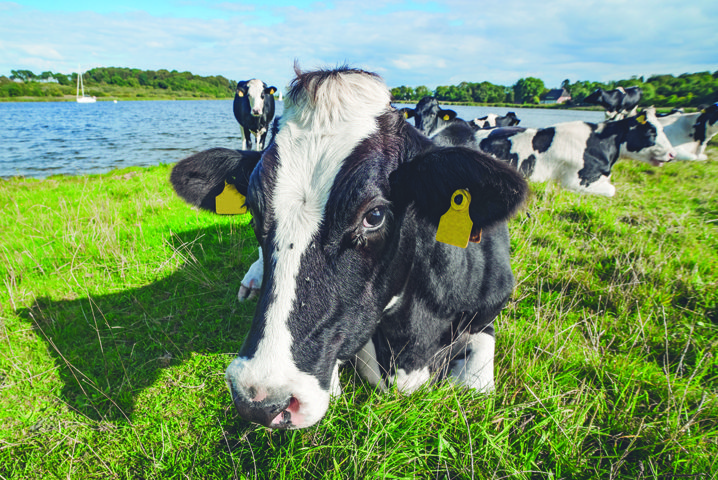 A Path Forward for Healthier Herds

When BLV was discovered in the late 70s, researchers in the US agreed that the disease posed little risk to the cattle industry, given the low occurrence of cancer in response to infection. At that time, only about 10% of the US cattle population was afflicted and it was decided that measures to control the disease were not necessary.

Presently, however, BLV afflicts approximately 40% of all US dairy cattle at a great economic and animal welfare burden. Frie’s research indicates that the true burden of the disease may not even be fully appreciated, as infected cattle are likely to die from a different disease that they were only susceptible to due to concurrent BLV infection.

With such high national infection rates in the US, it is not realistic to take aggressive action against the disease, such as euthanising infected animals, but steps must be taken to reduce its spread in the hope of one day eradicating BLV, as has been successful in many countries across Europe, Africa and Asia. Practical measures that have been identified in the US include changing needles and gloves between animals during treatments. Frie and her colleagues in the Michigan State University BLV research team hope that additional recommendations will continue to emerge as BLV research progresses. Their aim is that new research will help inform new policies and treatments that reduce the transmission of BLV. ‘That is the real, ultimate goal of all of this research,’ Frie says. ‘To be able to contribute to a positive change in the industry that leads to reduced BLV infections and, hopefully, happier, healthier and more productive dairy cows.’ 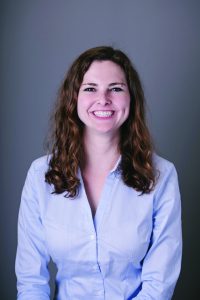 Meredith Frie began her education in health and immune function at the University of California, San Diego, graduating with a Bachelor of Science in Human Biology in 2012. She went on to join the Cell and Molecular Biology PhD program at Michigan State University (MSU) after receiving a recruiting fellowship from the College of Natural Science. Frie has conducted her graduate research in the laboratory of Dr Paul Coussens, professor of Animal Science and Microbiology and Molecular Genetics. While at MSU, Frie has been the recipient of numerous research awards, including two American Association of Immunologists Trainee Abstract Awards, two American Association of Veterinary Immunologists Graduate Student Awards, and a USDA NIFA Pre-Doctoral Fellowship intended to enhance her important work on the immune-suppressing symptoms of Bovine Leukemia Virus infection on US dairy cattle. She expects to defend her doctoral dissertation on the health impacts of the virus in November 2017, with three peer reviewed publications to date. She hopes that her work with BLV will help shape US cattle management practices to eradicate the virus and improve the health, wellbeing and productivity of dairy cows.