Florida’s citrus industry is under threat from Huanglongbing (HLB, or citrus greening disease), a devastating plant disease. A collaboration between the University of Florida and the University of Connecticut aims to develop resistance to HLB in citrus plants, using conventional breeding and cutting-edge CRISPR gene-editing approaches.

Citrus production is indisputably Florida’s most important agricultural industry, with over 400,000 acres, worth $9.3 billion annually. But Florida’s iconic citrus culture is under threat from a devastating tree disease, known as citrus greening or Huanglongbing (HLB), which is likely caused by Candidatus Liberibacter asiaticus (CLas) bacteria.

The vector for HLB is the Asian citrus psyllid (ACP) – a member of the psyllid family of sap-sucking insects. The ACP’s entire life cycle – from egg to nymph to adult – happens on trees and shrubs of the Rutaceae family, including citrus. ACPs suck on sap from shoots, and inadvertently introduce CLas into the plant’s sugar-transporting phloem vessels. In citrus trees, HLB symptoms include yellowing of leaf veins and a blotchy green-yellow mottling of the leaf blades, twig dieback, stunted growth and eventual death. Afflicted trees bear small, irregularly-shaped, bitter-tasting green fruits with little market value.

First observed in China in the early 1900s, HLB has decimated citrus groves in many parts of the world, especially in Florida. In fact, the state’s citrus production has more than halved since HLB was discovered in Florida in 2005. Unfortunately, HLB is also proliferating rapidly through America’s other citrus growing states – California and Texas – which fear they will suffer the same fate.

HLB has hit Florida’s economy hard. The extortionate costs of grove maintenance and stock losses has forced many growers out of business. Packinghouses and processing plants have also closed, with significant declines in employment. Recommended management strategies – including using pathogen-free planting stock, insecticides, and removal of infected trees – have had limited effectiveness in Florida because the disease was already widespread prior to its detection. Moreover, psyllids are developing resistance to insecticides. Therefore, farmers have faced two choices: remove their trees and start again or attempt to keep infected trees reasonably productive through horticultural intercessions. The former approach is impractical, and the latter is costly and perhaps unsustainable. 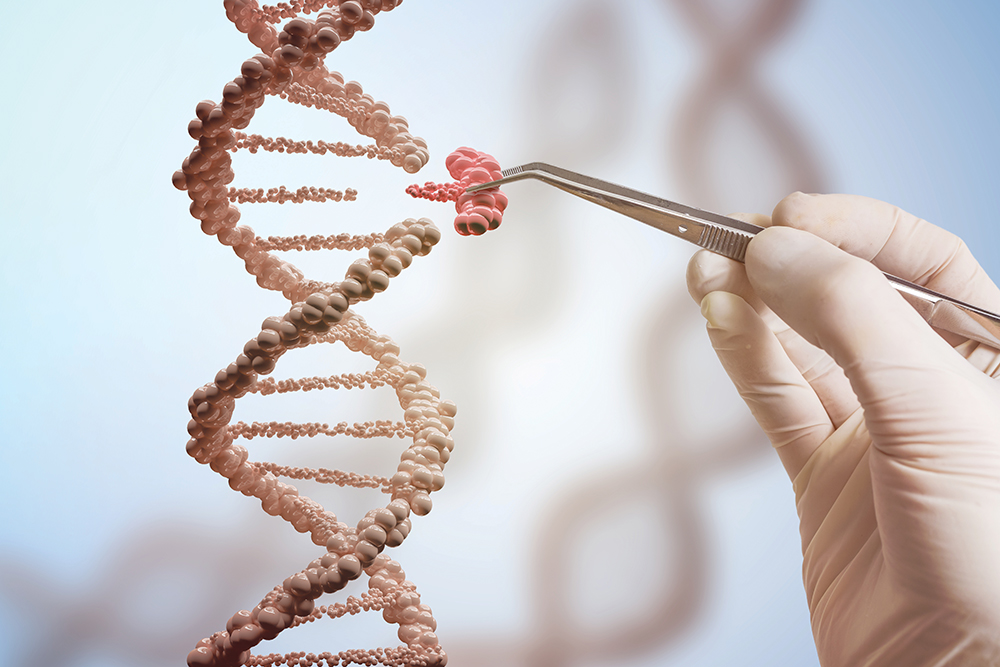 A synergistic collaboration between scientists is attempting to find long-term robust solutions in combatting HLB. The team includes the research groups of Professors Fred Gmitter and Zhanao Deng of the University of Florida, and Professor Yi Li of the University of Connecticut. Using a suite of cutting-edge gene editing, genetic engineering, and breeding techniques, they are attempting to create citrus varieties with intrinsic resistance to HLB as well as other useful agronomic traits.

Sadly, there’s no ‘cure’ for HLB, and no citrus species is known to have complete resistance. ‘However, there are different degrees of sensitivity to the disease,’ says Professor Gmitter, ‘and this offers us hope that plant breeders and geneticists may be able to devise strategies that can lead to the development of very tolerant, or perhaps even resistant, citrus trees. 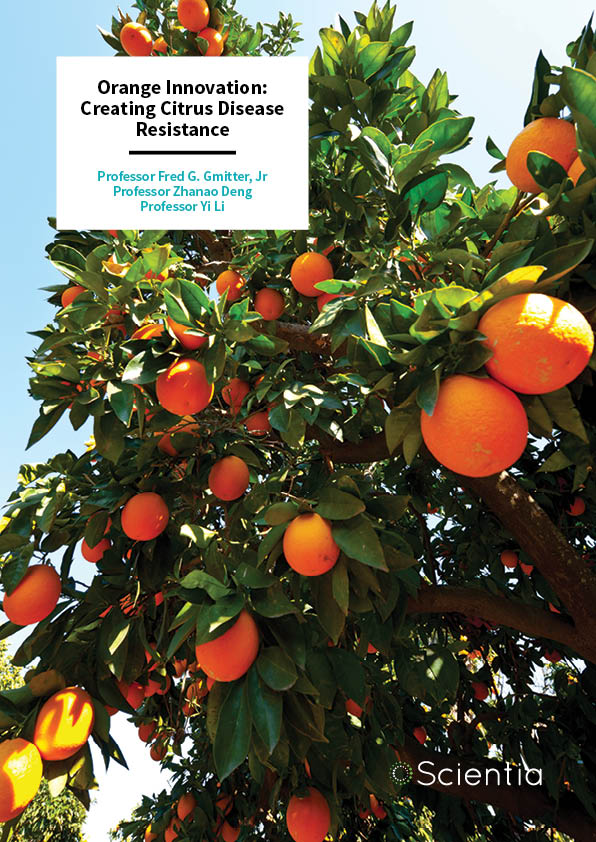 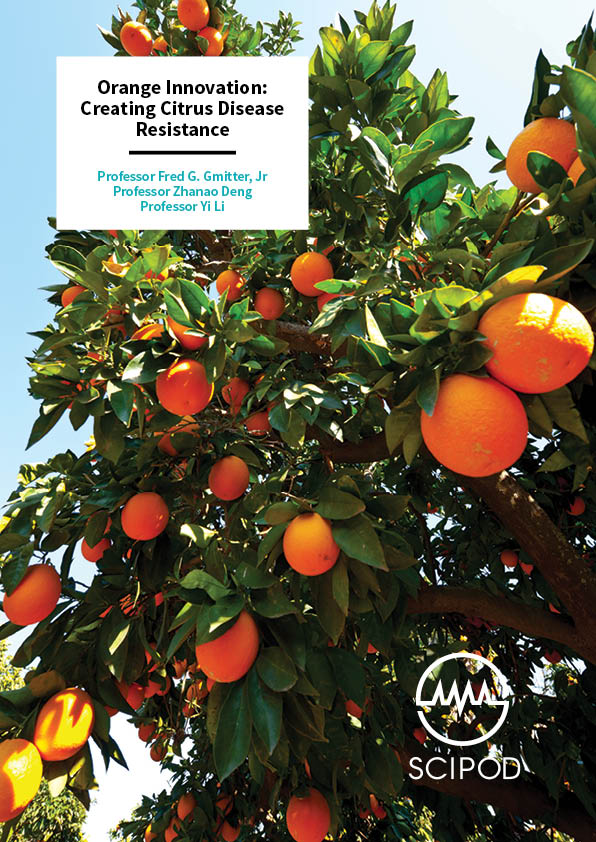 HLB plays out at the molecular level in citrus plants, and various plant proteins may be implicated in bestowing tolerance to the disease. Proteins are encoded by DNA (genes), and thus disease-tolerant traits (phenotype) are determined by the plant’s genotype. Professors Gmitter, Deng and Li and their colleagues are genetically screening cultivated citrus varieties with high and low tolerance to HLB, to identify which genes (and corresponding proteins) are important in fighting HLB. This information will be useful in selecting genetic targets for breeding HLB resistance into commercial varieties.

The team has had a number of successes in characterising varieties with high tolerance to HLB, which could provide breeding stock for commercial citrus production. These include trifoliate orange (Poncirus trifoliata), which hybridizes with several commercial citrus species, and rough lemon (Citrus jambhiri).

The researchers carried out genotype-phenotype experiments with trifoliate orange and trifoliate orange-sweet orange hybrids (‘citrange’), exposing these plants to HLB, and found that the Poncirus-derived plants (both ‘pure’ and hybrid) had low susceptibility to HLB. With cutting-edge genotyping tools, they also mapped the genomes of the citrange hybrids to locate certain ‘quantitative trait loci’ (QTLs). QTLs are DNA sections that determine specific traits – in this case, the team identified those related to HLB tolerance.

Genes direct the production (or ‘expression’) of proteins through messenger RNA ‘transcript’ molecules. The group investigates RNA transcript profiles (the ‘transcriptome’) to indicate gene expression. Using transcriptomics tools, they have compared the transcriptomes of HLB-tolerant rough lemon with HLB-susceptible sweet orange to determine which genes are ‘switched on’ to express proteins implicated in disease tolerance. The insights from these studies have led the team to identify genetic ‘biomarkers’ to aid breeding and genome editing efforts. Also, the team’s efforts to characterize the genotype-phenotype relationships will be instrumental to the research community’s efforts to rescue the citrus industry. 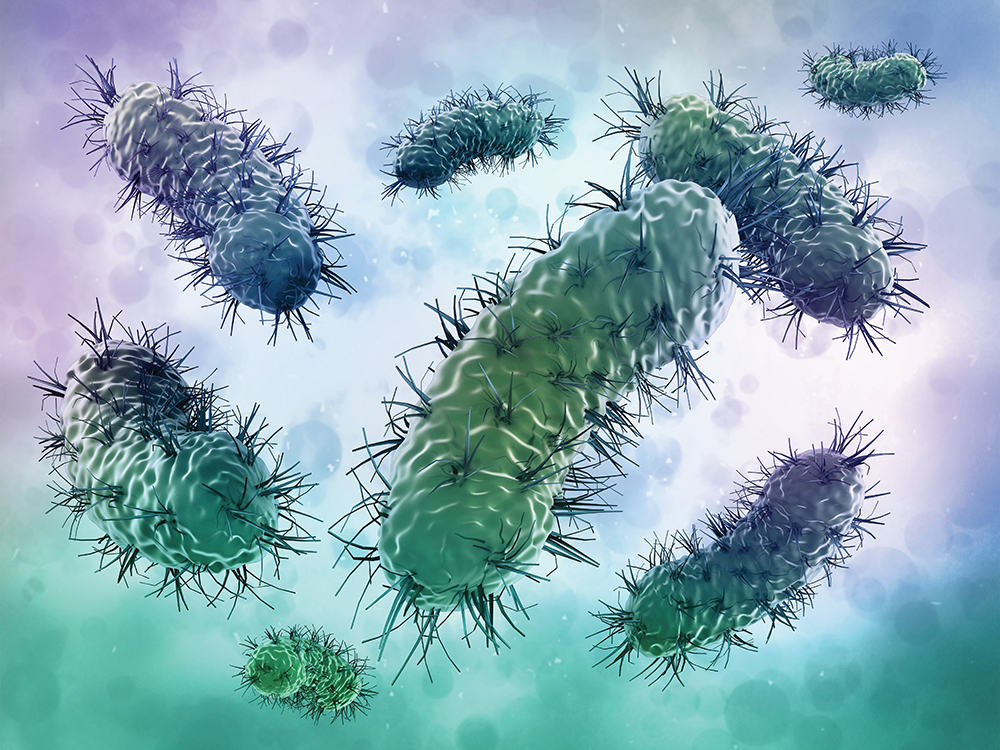 Professor Gmitter’s research scope extends beyond HLB. ‘Our long-range goals include the development of new varieties of citrus that will taste and look better, will be more nutritious, and will be sustainable,’ he states. Producers and consumers want fruits that are easy to handle and process, and the group’s breeding programs are geared towards these requirements.

In 2015, they developed an early maturing, easy to peel, seedless mandarin variety named ‘Bingo’. Recently, they crossed different varieties to produce seedless offspring towards the development of additional new seedless grapefruits and mandarins. A current ongoing project involves developing lemon varieties for improved peel oil production, as well as seedless fruit. To this end, they selected up to 50 lemon varieties from several thousand candidates. They have also planted new rootstock in Florida’s citrus groves to evaluate production out in the field. In collaboration with Dr. Yu Wang at the University of Florida, they are evaluating oil and juice quality of lemons grown near Vero Beach, Florida – an area where HLB is endemic. Since HLB was first found in Florida, the focus shifted substantially to HLB tolerance.

Conventional selective breeding is slow – often taking several years or decades to obtain varieties with the desired traits. But HLB is an imminent threat – and tough citrus plants that can fight infection are needed as soon as possible. A modern alternative is genetic modification (or ‘genetic engineering’). This involves introducing one or more foreign genes from any suitable organism – plant, animal or even microbes – into the plant genome.

Unlike selective breeding, genetic modification (GM) can produce traits not found in the plant population – higher yields, resistance to pests or diseases. GM crops were first introduced in the 1980s and are adopted worldwide – but their uptake is controversial. ‘Many consumers and countries have rejected GM foods even though extensive studies have proved they are safe to consume,’ says Professor Li.

There is an even newer alternative – CRISPR gene editing. CRISPR was first discovered in 2007 as an RNA-based ‘immune system’ in bacteria. In the early- to mid-2010s, CRISPR began to be repurposed as a versatile gene editing system for a range of organisms, taking the world of biotechnology by storm. Very early on, the agricultural utility of CRISPR for improving crop plants was realized. CRISPR is much faster than conventional breeding in targeting very specific characteristics – perfect for rapidly engineering resistance against new threats. In collaboration with Professors Gmitter and Deng, Professor Li’s research group is actively investigating CRISPR biotechnology in plants, with the long-term plan of applying this to rapidly engineering new traits such as HLB resistance. 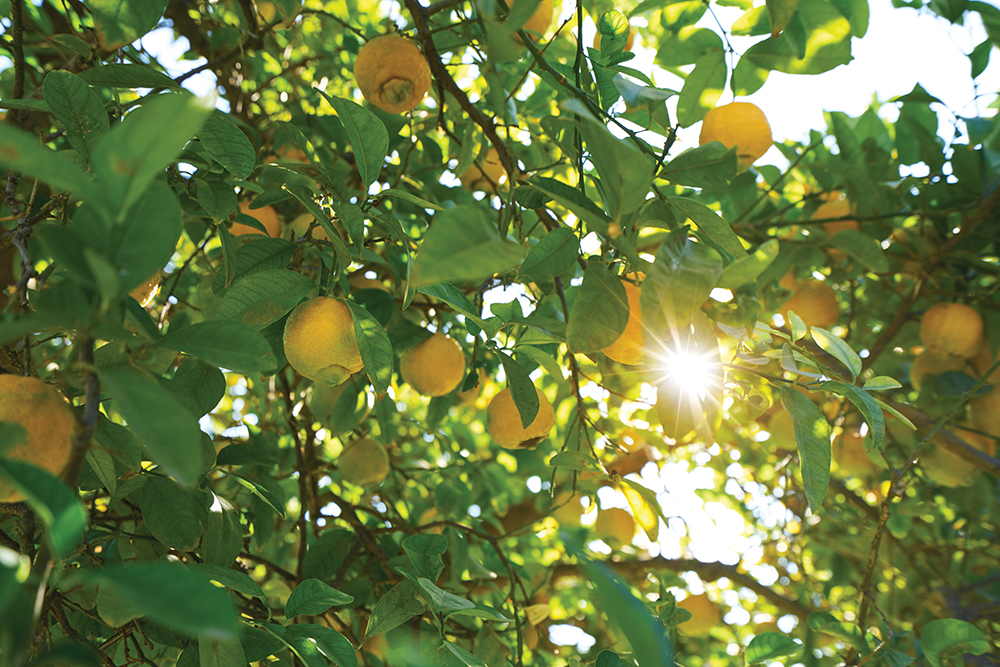 CRISPR-modified organisms are generally not regarded as GM. GM involves ‘copying and pasting’ genes or large DNA sections from other organisms into plant genomes. In contrast, CRISPR gene editing involves directly rewriting the plant’s own genetic code by introducing relatively small targeted changes to the DNA – such as insertions, deletions or substitutions. The changes are akin to inheriting a good gene variant – but without the unpredictability of conventional breeding. Hence, CRISPR is far less controversial – both to the public and regulators. In March 2018, the USDA announced that it won’t regulate new plant varieties developed by genome editing technologies such as CRISPR that yield plants indistinguishable from those developed by traditional breeding methods – as opposed to GM plants that contain DNA from another organism.

The CRISPR system, derived from bacteria, consists of a protein – Cas9 – which snips DNA, and an RNA molecule that acts as a guide for making minor edits to the DNA code. Like a targeted missile, RNA and Cas9 together locate a specific DNA section of the genome and make changes. The system is precise and surprisingly simple. The standard approach for plants is to insert the CRISPR genes that encode the CRISPR-Cas9 system into the plant’s genome, which then expresses the RNA-Cas9 ‘editing machine’ that makes the required genotypic changes. But this presents a catch-22, as inserting the bacterial CRISPR gene into the plant would make it a GM crop.

Therefore, the research team has developed a CRISPR plant application that does not introduce foreign bacterial genes into the plant’s genome – using Agrobacterium tumefaciens to deliver the CRISPR-Cas9 system instead. Agrobacterium is a soil bacterium that naturally associates with plants, commonly used in plant biotechnology. They engineered the Agrobacterium’s DNA to express the CRISPR RNA-Cas9 ‘editing machine’, and incubated the bacteria with tobacco leaves together. The bacteria infect the plant cells and deliver the gene-editing machinery, which rewrites the genetic code. The Agrobacterium DNA does not become part of the plant’s genome, so CRISPR genes cannot be passed down through plant generations.

The researchers were able to regenerate whole plants from the edited plant cells after a few weeks or months – far quicker than the years it takes with conventional breeding. The Agrobacterium CRISPR process is fairly easy – but the hardest part is diagnosing whether gene editing was a success. The team has developed a clever method for the rapid, expedient screening of CRISPR-modified plants, using high-throughput DNA screening to identify whether the plant tissues have the required genomic edits.

The team’s revolutionary approach to Agrobacterium-mediated CRISPR for plant gene editing could be used to circumvent current legislation and rapidly develop GM-free crop traits indistinguishable from those achieved through breeding efforts. The collaborative team hopes to use the CRISPR gene editing to create robust citrus varieties that fight off HLB, without compromising other traits desired by producers and consumers. 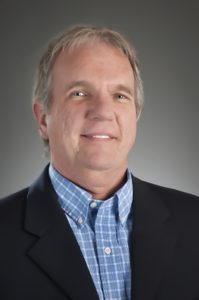 Professor Fred G. Gmitter Jr. earned his PhD in Horticultural Sciences in 1985 at the University of Florida, where he is currently a Professor at the Citrus Research and Education Center. He is a citrus breeder focused on developing new rootstock and scion cultivars. His research is aimed towards supporting Florida’s citrus industry with fruits that are robust, easy to process, disease-tolerant, delicious and aesthetically pleasing. He has released and patented several elite cultivars. Professor Gmitter deploys classical and contemporary genetic and genomic approaches to improve efficiency of breeding programs, while maintaining focus on cultivar development and release. 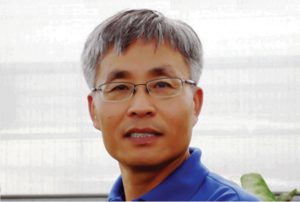 Professor Zhanao Deng obtained his PhD in Horticulture at Huazhong Agricultural University, China, in 1988. He is currently a Professor at the University of Florida, where he specializes in ornamental plant and fruit breeding and genetics. His research is geared towards developing new plant cultivars for Florida growers and consumers. His current breeding efforts are directed toward the developing and releasing new caladium and lantana cultivars, genetic sterilizing lantana and nandina, and developing biotechnological tools to speed up genetic improvement of horticultural plants for disease resistance. 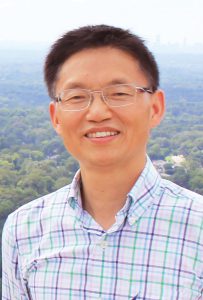 Professor Yi Li obtained his PhD from the State University of New York. He is currently a professor in the University of Connecticut, with research in the areas of plant physiology, biotechnology and breeding. He has developed a number of transgenic (genetic modification) and gene editing technologies, including seedless fruit technology, gene deletor technology, grafting enhancing technology, and several new horticultural plant cultivars. He has received more than $8 million in research grants, and his research has been extensively covered by the media.