Professor Christine Theoret at the University of Montreal studies dermal fibroproliferative disorders in horses with the aim of reducing financial and welfare impacts on the equine industry. The results of her work may also be carried over to the field of human keloids. 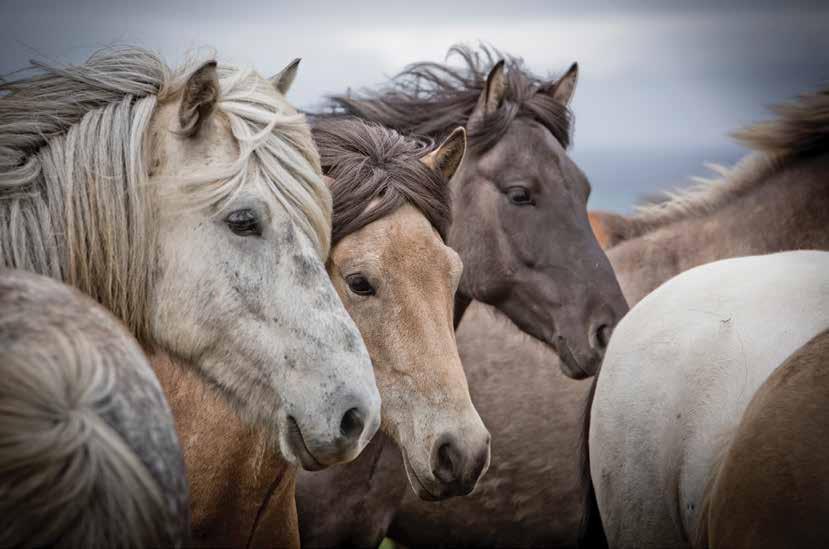 Skin wounds exert a tremendous emotional and financial impact on horse owners and on the equine industry. Wounds in horses are difficult to treat and frequently require multiple veterinary visits and interventions. Moreover, when wounds are located on the legs of horses, they commonly lead to the development of a dermal fibroproliferative disorder. In humans, these benign tumourlike growths are referred to as ‘keloids’, while in the horse they are coined ‘exuberant granulation tissue’ or ‘proud flesh’. These lesions present cosmetic concerns and functional problems often leading to lameness, since they are most frequently located on the legs. Upon beginning her surgery residency and graduate training in Western Canada, Professor Theoret noticed the large number of horses suffering from skin wounds. ‘I was confronted with numerous serious skin wounds in horses kept in pastures fenced with barbed wire,’ she recalls. Because horses are prey, they normally attempt to flee when feeling threatened. For horses kept in pastures with barbed wire fences, this response can result in deep and extensive lacerations that may never fully heal. Injuries, wounds and trauma are cited as the most common medical condition affecting horses and as a leading cause of death in foals less than 6 months old. In addition to the financial burden caused by slow wound healing, proud flesh is a significant welfare concern. For this reason, Professor Theoret aimed her PhD studies towards an improved understanding of wound healing in horses. ‘I sought to improve my understanding of the physiopathology of wound healing in this species, which apparently differed from what was described in other veterinary species, in an effort to accelerate the healing process and ameliorate its outcome,’ she explains.

Suturing is required for ‘first intention healing’, and is mostly used for clean wounds in which the edges can be brought together without creating undue tissue tension. Conversely, ‘second intention healing’ is generally required for wounds with larger tissue defects and in which suturing the wound edges together is not possible. Large open wounds in horses are prone to a number of complications, including bacterial colonisation and infection, prolonging recovery. Moreover, like humans, horses have ‘tight skin’ that does not allow wound contraction. Instead, wounds healing by second intention do so mainly by the slow process of epithelialisation; this new epithelial cover is fragile and susceptible to reinjury. Most wounds in horses require open management with frequent bandage changes and multiple veterinary visits, often resulting in cost-prohibitive treatment plans. Although skin grafting is a viable option in other species, its use in the horse is limited by the scarcity of donor skin. Many adjunctive therapeutic approaches exist in the realm of equine wound care, including maggot debridement therapy, platelet concentrates, honey, negative-pressure wound therapy, and cell therapy, as described in the Equine Wound Management textbook edited by Professor Theoret and published by Wiley. 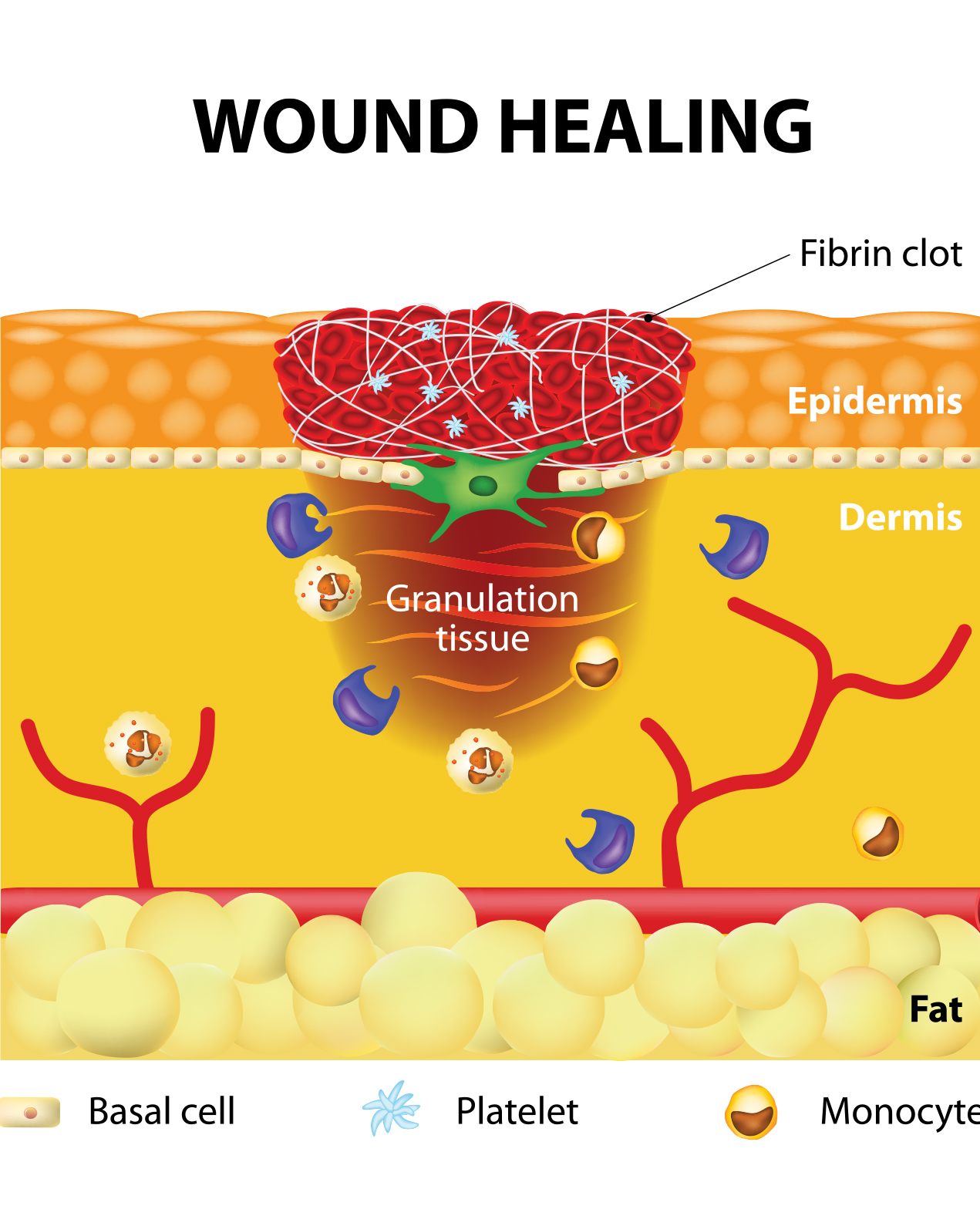 However, none of these alone is sufficient to uniformly accelerate second intention healing nor to prevent or treat common complications such as proud flesh.

Professor Theoret and her colleagues developed a model that enables the study of this healing disorder in horses, with the aim of improving the preventive and therapeutic options. They began by identifying specific equine genes associated with problematic healing in order to eventually target them for therapeutic purposes. Genes involved in inflammation, angiogenesis, epithelialisation and matrix remodelling were then cloned and the spatiotemporal expression of their associated proteins was mapped to distinguish their action during normal and pathologic healing.

Because molecules controlling angiogenesis were found to differ in wounds on the leg, which are prone to fibroproliferative disorders, the Theoret lab took a closer look at blood vessel development within the granulation tissue of wounds. Using transmission electron microscopy, they demonstrated that microvessel occlusion, due to endothelial cell hypertrophy, characterizes leg wounds developing proud flesh. The result of microvessel occlusion is poor perfusion, leading to hypoxia of the wound, as confirmed with infrared thermography and near infrared spectroscopy. Hypoxia present in leg wounds leads to a prolonged inflammatory response thereby delaying the progression of healing, since the ability of leukocytes to kill bacteria is oxygen-dependent. Additionally, profibrotic mediators are upregulated in response to hypoxia, thereby encouraging the production of extracellular matrix and, ultimately, promoting the development of proud flesh, or keloids.

The horse as a model to study wound healing in man

For obvious ethical reasons, it is difficult to study wound healing and scar formation in human subjects, yet scarring exerts an immense economic and social impact. For example, keloids are disfiguring and often pruritic and/or painful. In spite of the numerous therapeutic modalities currently in use including occlusive dressings, compression, corticosteroids, excisional surgery, radiation, cryosurgery, laser therapy, and anti-neoplastic drugs, the recurrence rate of keloids is very high. Horses may provide a superior model to study scarring compared to laboratory animals such as rats and mice because horses are the only known mammals (aside from humans) that naturally develop dermal fibroproliferative disorders. Only 53% of studies using rodent wound healing models yielded results likely to translate to improved clinical outcomes in human trials. This poor concordance no doubt reflects the numerous anatomic and physiologic differences between small mammals and humans. For example, mice heal primarily through contraction due to the presence of a muscle, the panniculus carnosus, in their subcutaneous tissues, which is absent in humans and on the legs of horses. Morphologic similarities between equine ‘proud flesh’ and human keloid include excessive accumulation of extracellular matrix characterized by poorly organised collagen fibrils, and a thickened epithelial cover in mature lesions, as described in a collaborative study undertaken by Professor Theoret’s team and researchers at the Baylor College of Medicine. Consequently, equine ‘proud flesh’ may offer researchers unprecedented opportunities to develop and test new treatments that should speed the healing process and counter fibrosis and scarring in all types of patients, thereby dually advancing veterinary and human wound care.

Professor Theoret’s experimental equine model has garnered the attention of scientists studying human wound repair and she was invited to present this model at the Symposium on Fibrosis and Scarring of the NIH Center for Wound Healing Research, at a Gordon Research Conference on Tissue Repair and Regeneration, and at the First International Keloid Symposium. However, Professor Theoret openly discusses limitations to using the horse as a model and areas in which the scientific community can improve upon. Unlike mice, horses are large and expensive to maintain, requiring housing and research facilities available only in certain research centres or veterinary schools. It is difficult to examine gene regulatory mechanisms and signal transduction pathways due to the paucity of equine cell lines and reagents. But Professor Theoret is confident that with the increasing use of next-generation sequencing she and her team will be able to provide more information on the genomics behind wound healing and repair in coming years. ‘Although the use of horses as translational models is not appropriate or practical for widespread use in wound healing research, I think my model may be superior for specific investigations, for example those relating to naturally-developing fibroproliferative disorders.’ 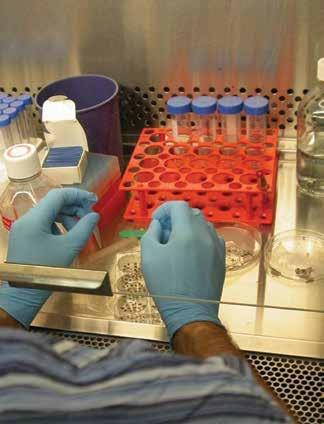 ‘My childhood Christmas wish list always included a horse. Although I never found one under the Christmas tree, I eventually became an equine surgeon and have dedicated my research program to improving equine welfare’

Skin, the largest organ of the body, is our first line of defence against many infectious and traumatic insults. Currently, there is no method of artificial skin replacement that results in complete emulation of the original tissue. Recent developments in stem cell therapy have prompted scientists to investigate this option for the generation of tissue-engineered constructs. Professor Theoret tells us about her work in this area: ‘We recently developed an efficient protocol to differentiate equine induced pluripotent stem cells (eiPSC) to a keratinocyte lineage (eiPSC-KC), thereby achieving an important advancement for equine regenerative medicine since, in principle, eiPSC should provide an inexhaustible source of cells that might be used to engineer a fully functional skin substitute for horses suffering from wounds or skin disease.’

While stem cell therapy often faces controversy, generation of iPSC does not require the destruction of an embryo and iPSC have a much lower probability of immunological rejection since cells obtained from the patient’s own tissues may be grafted. By marrying eiPSC-KC with technologies like autologous equine platelet-rich fibrin gel and tissue scaffolding, regeneration may occur with fewer errors in migration, proliferation, differentiation and orientation. Stem cells also possess chemotactic properties that may enhance the recruitment, to the site of injury, of native cells critical for proper regeneration.

While stem cell therapy often faces controversy, generation of iPSC does not require the destruction of an embryo and iPSC have a much lower probability of immunological rejection since cells obtained from the patient’s own tissues may be grafted. By marrying eiPSC-KC with technologies like autologous equine platelet-rich fibrin gel and tissue scaffolding, regeneration may occur with fewer errors in migration, proliferation, differentiation and orientation. Stem cells also possess chemotactic properties that may enhance the recruitment, to the site of injury, of native cells critical for proper regeneration.

The next steps for Professor Theoret’s group include grafting eiPSC-KC on to horses and determining whether or not they have the capacity to regenerate a stratified epidermis with all of its components, and introducing eiPSC into different organs of the body to ensure that induction of differentiation is not variable. It will be necessary to test this approach in a large number of subjects because biological therapeutics are generally inconsistent in their success due to variations in host immunity. If these trials are successful, iPSC-KC may eventually be utilised in the treatment of wounds. Ultimately, the goal is to reduce equine euthanasia rates and the proportion of horses retired from competition due to the effects of poor wound healing and associated dermal fibroproliferative disorders. 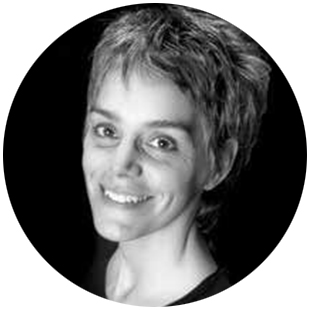 Christine Theoret is currently a Professor in the Département de biomédecine vétérinaire and Director of the Comparative Veterinary Tissue Healing Laboratory at the Université de Montréal’s Faculty of Veterinary Medicine. After obtaining her DMV degree at the Université de Montréal, she pursued MSc and PhD programs in veterinary surgery and molecular biology, respectively, at the University of Saskatchewan. It was also here that she completed her surgery residency and subsequently became a Diplomate of the American College of Veterinary Surgeons. She has served appointments as visiting professor at universities worldwide and has received multiple awards for leadership and teaching. She has served as advisor to a number of biotech companies and as board member for international associations, and sat a term as President of the Veterinary Wound Management Society. She has mentored numerous graduate and undergraduate students studying wound healing, new therapeutic modalities, tissue regeneration, and the role of the horse as a model for the study of human wound healing and scarring. 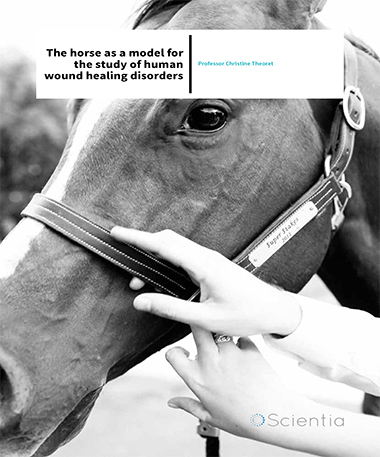