How do we hear and process sound? Professor David Furness at Keele University, UK, is endeavouring to answer this question. By utilising modern microscopical techniques, his team is visualising and identifying the proteins that enable us to convert sound into electrical signals in the hearing pathway.

Every day we are greeted by sound, whether it is the sound of cars passing by on the street, the sound of the birds chirping as we wake up, or the sound of our alarm clock. For some individuals such as musicians, sound is integral to their livelihood. For others, such as people with deafness, the loss of sound significantly impacts on their lives. 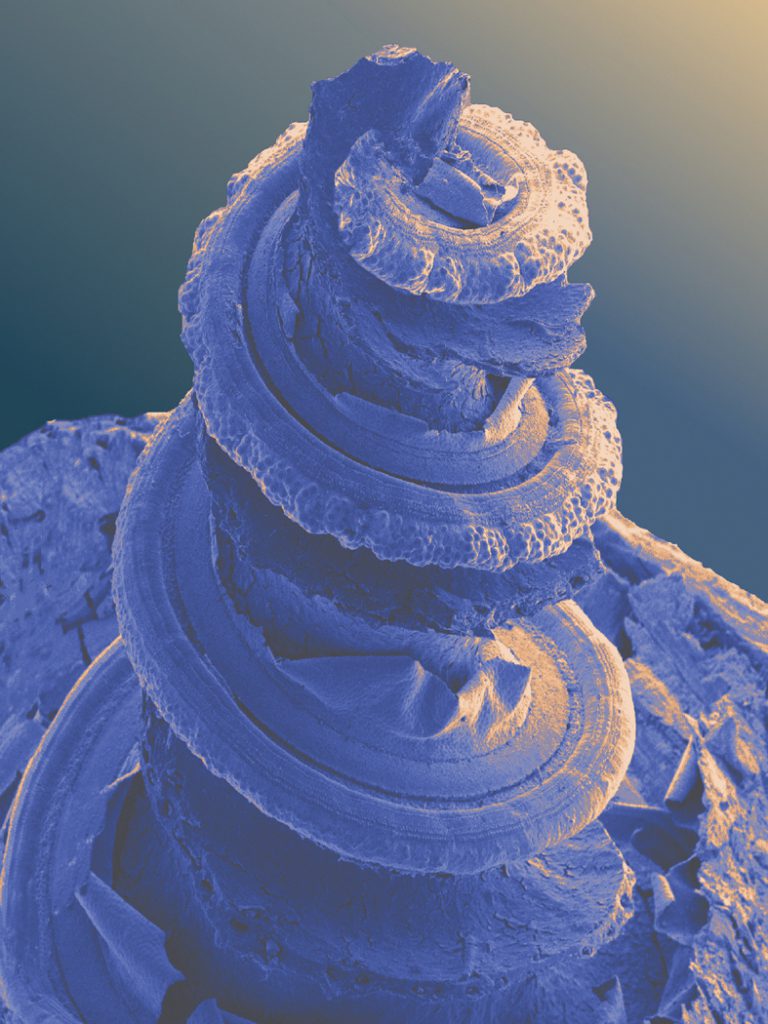 Our ability to perceive sound by detecting vibration changes in the ear, or hearing, is one of the traditional five senses. Auditory science is a research field in neuroscience dedicated to identifying the precise mechanisms by which we hear. It is currently understood that specialised cells called hair cells, named after the tiny hair-like structures that sprout from them, are the site through which sounds are converted into electrical responses. This process is known as mechanoelectrical transduction (MET). These electrical responses are then amplified to increase sensitivity and tuning before being carried to the lower areas of the brain, through the auditory nerve, for processing.

What remains to be identified is the precise cellular pathways that underpin such phenomena. Where exactly are they and how do they develop? Endeavouring to answer this research question is Professor David Furness and his team at the University of Keele.

Professor Furness describes how, ‘sound stimuli enter the inner ear through the outer ear, pass through the middle ear, and set up vibrations in the inner ear. These reach the hair cells and cause the tiny hairs to be pushed backwards and forwards. It is this movement of the hairs that pulls on very tiny filaments (called the tip links) that trigger the opening of special ion channels in the membrane of the cell, causing the hair cell to respond and send signals to the brain. Our work focuses on localising the proteins involved in this process and determining how they develop.’ To achieve this, Professor Furness and his team utilise sophisticated imaging techniques and the latest technology in microscopy.

‘Sound stimuli enter the inner ear through the outer ear, pass through the middle ear, and set up vibrations in the inner ear. These reach the hair cells and cause the tiny hairs to be pushed backwards and forwards. It is this movement of the hairs that pulls on very tiny filaments (called the tip links) that trigger the opening of special ion channels in the membrane, causing the hair cell to respond and send signals to the brain. Our work focuses on localising the proteins involved in this process and determining how they develop.’

Getting to Grips with Tip Links

To appreciate the complexity of Professor Furness’s work at the cellular level, it is imperative to understand the structure of the fine hairs on the hair cell. These hairs, or ‘stereocilia’, form rows in a staircase like arrangement, increasing in height from shortest to tallest. 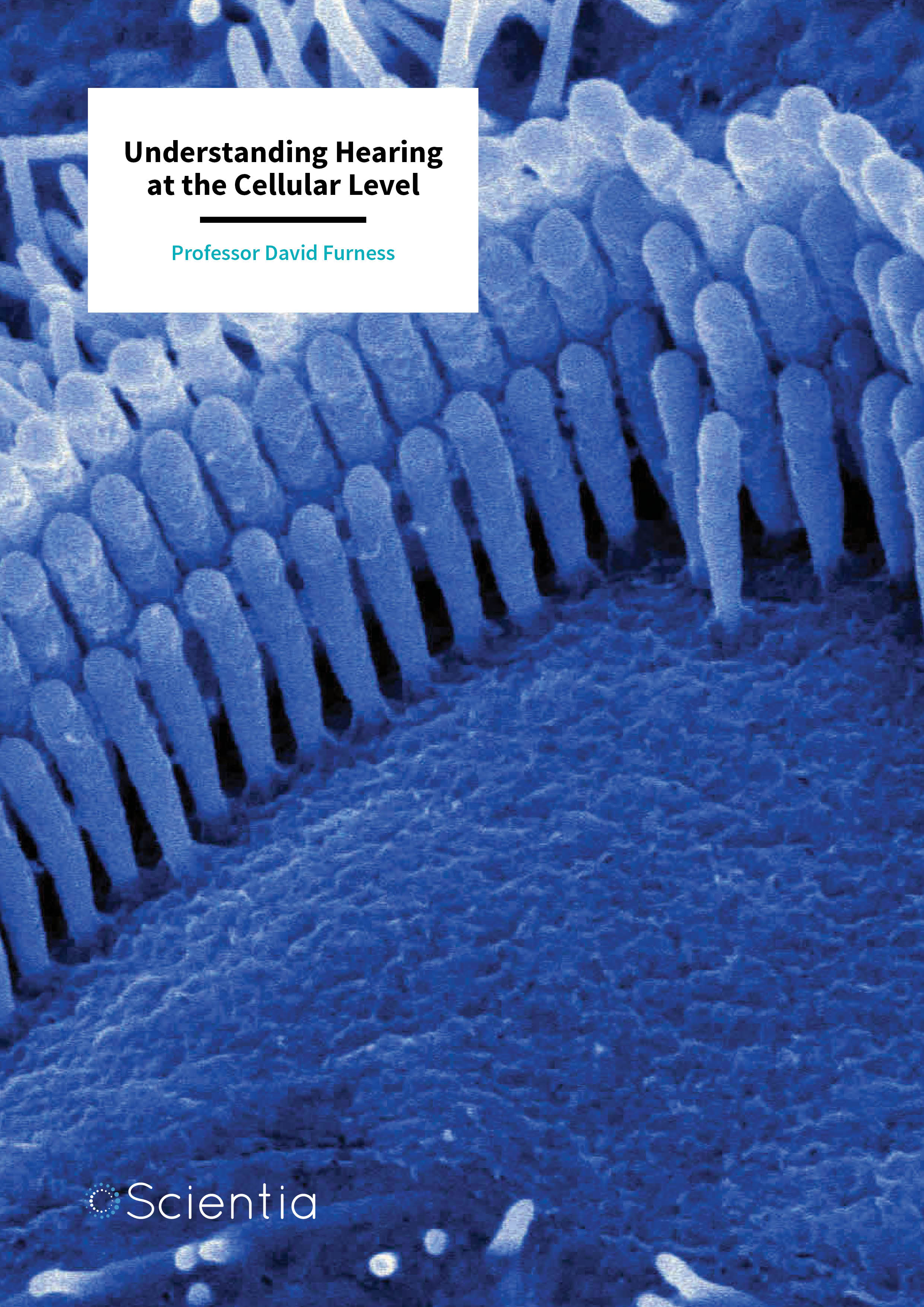 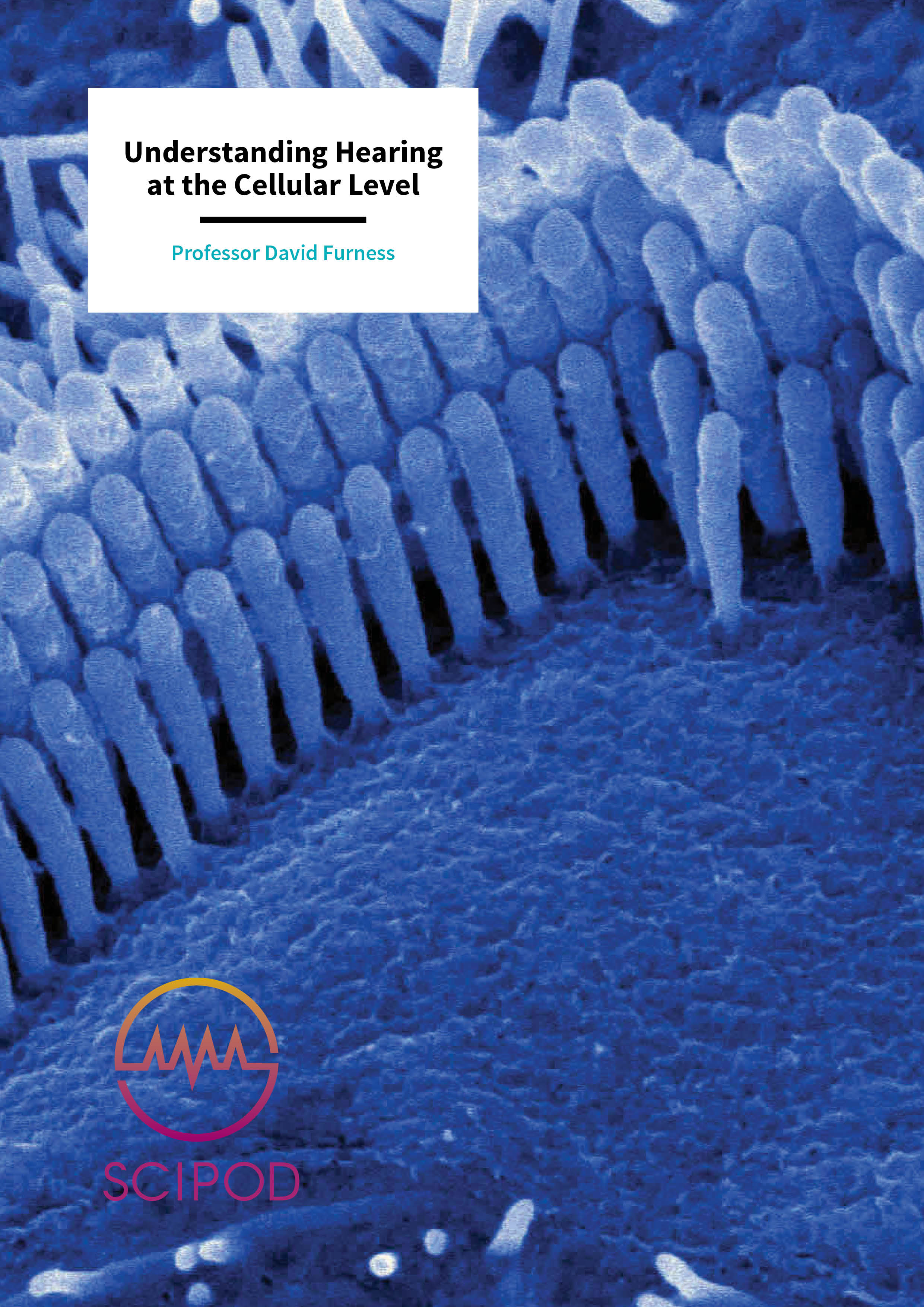 Between each stereocilia is a tip link that forms a bridge between the shortest and the tallest filament. At the site of the shortest stereocilium, there exists a protein complex that is responsible for opening the ion channels involved in creating the electrical signal that is sent to the brain. Deflection of the hair bundle in which the stereocilia stand causes tension on the tip link filament, causing the ion channels to be opened by this protein complex.

If deflection occurs in the opposite direction, the tension is withdrawn, and the tip link relaxes resulting in the channel closing. Professor Furness describes how his team, ‘has shown using precise electron microscopic studies that two of the proteins important for hearing (LHFPL5 and TMC1) are located at the tips of some of the hairs, showing them to be in an ideal location for interaction with the tip link and detection of sound stimuli.’

In order to demonstrate the importance of a protein in a process, scientists often use animal models in which these proteins are eliminated so that they can no longer serve the function that they are believed to. Previous research has demonstrated that mice lacking the protein protocadherin 15 (PCDH15) have a reduced number of tip links and their hair bundle structure is malformed. A consequence of this structural alteration is the production of currents that flow in the opposite direction to normal and the disruption of mechanoelectrical transduction.

Interestingly, this abnormal current is also independent of two other proteins involved in producing an electrical current, the channel proteins TMC1 or TMC2, as this current occurs in mice that have had these proteins removed through manipulating their DNA. A third protein, lipoma HMGIC fusion partner-like 5 (LHFPL5), has been found to interact with PCDH15 and TMC1 and is required for the targeting of both of these proteins to the stereocilia tip links. In mice lacking PCDH15, LHFPL5 is also absent. It is therefore thought that LHPL5 may act as the link between PCDH15 and the ion channels that create the electrical signal during mechanoelectrical transduction. 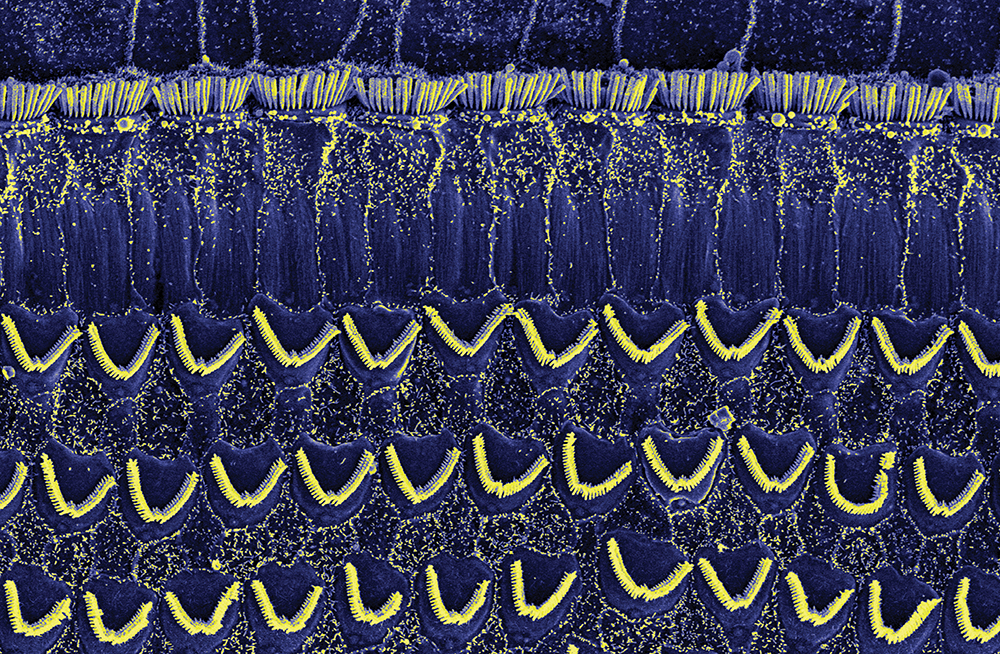 Investigating the Role of LHFPL5

To achieve this, the team adopted ‘immunofluorescent’ and ‘immunogold’ labelling techniques to evaluate the changes in the distribution of LHFPL5 in mice during development. These techniques involve using fluorescent molecules or gold particles to label specific proteins so that they can be seen using a microscope, creating beautiful scientific works of art. The addition of gold particles allowed the team to use a very sensitive technique called transmission electron microscopy (TEM), which allowed them to identify the precise locations of LHFP5 molecules. This technique offers a much higher resolution compared to traditional microscopy methods.

The team has demonstrated that the LHFPL5 protein first appears in the hair bundles at the first day of birth and continues to increase in expression until the mice are three days old, before then declining. The team’s immunogold labelling experiments illustrate that whilst LHFPL5 is initially localised throughout the hair bundle, by 12 days old the location of the protein is refined to the link-tips of the shortest stereocilia. 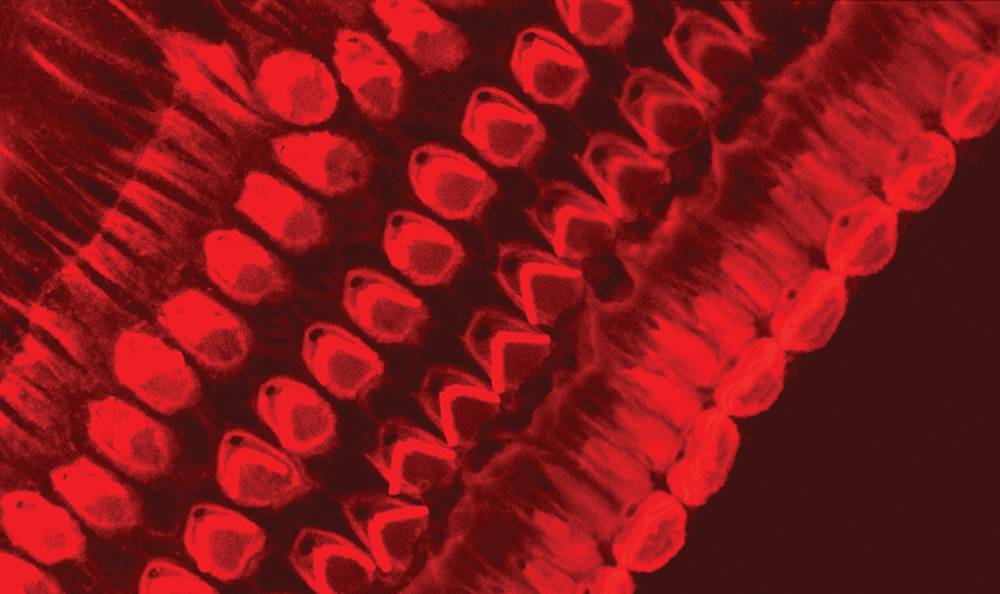 Professor Furness and his team concluded that this refinement of the location of LHFPL5 coincides with the maturation of the hair bundle and the production of an electrical current. Further, LHFPL5 becomes refined to its adult location by 12 days of age – the time at which mice start to hear. A crucial finding of the team’s research is that they could detect LHFPL5 up to the age of 21 days, suggesting that this protein is a permanent component of the mechanoelectrical transduction complex along with the tip links.

Labelling the shortest stereocilia also illustrates that LHFPL5 is located at the lower end of the tips and appears to follow the tenting of the tip. Tenting is a process in which there is a change in the shape of the membrane at the very top of the stereocilia, and it is thought to result from an increase in the membrane tension that is required for producing an electrical response. The team has determined that the location of LHFPL5 is consistent with this protein’s role in mechanoelectrical transduction as a potential linker between the PCDH15 protein at the lower end of the tip link and TMC1. They also suggest that it interacts with both of these proteins.

Professor Furness’s work has greatly contributed to our understanding of the cellular interactions responsible for the process of auditory transduction and hearing, and also presents avenues for further research. Professor Furness says that, ‘other researchers interested in the topic of hair-cell function will benefit from these research outcomes because this project helps to confirm whether TMC proteins form the transduction channel of hair cells. Thus, researchers will be able to develop new strategies to explore further into the mechanisms of transduction.’ 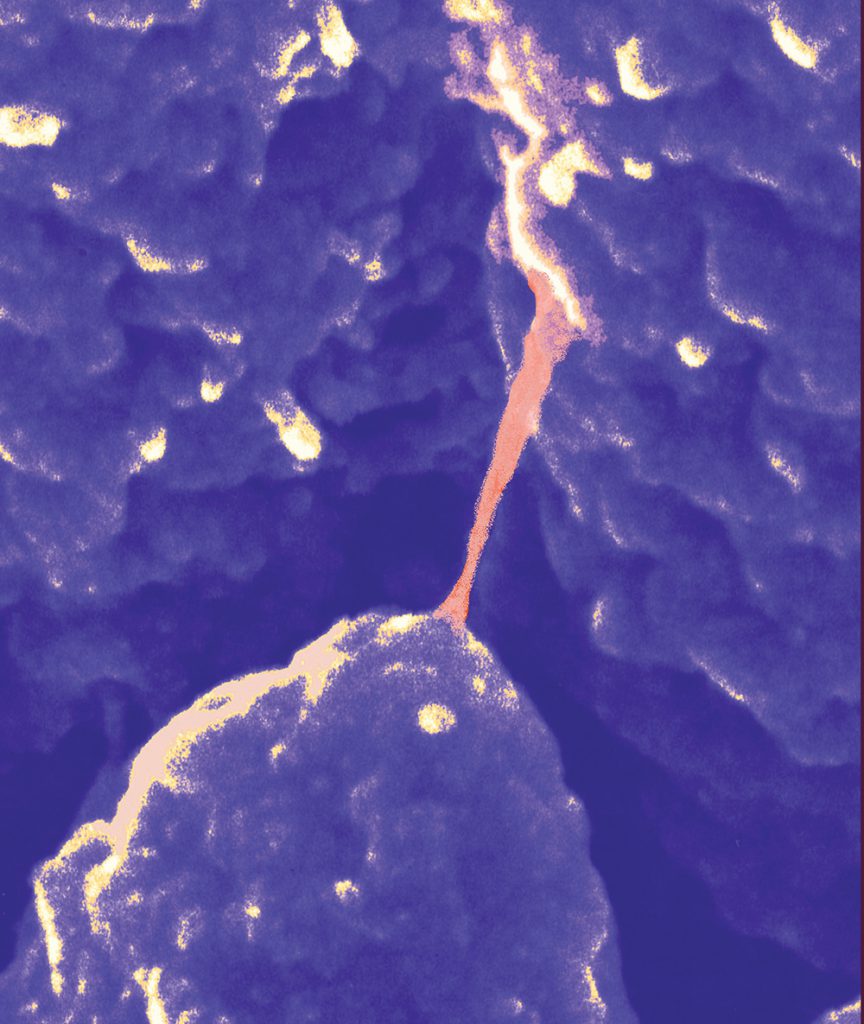 Now that the location of the protein LHFPL5 has been determined, Professor Furness and the team wish to explore further its role in hearing. Professor Furness describes how, ‘we hope to continue to localise other proteins involved in this process in hair cells, and then see how they all fit together to allow sound to be detected.’

In the future, the team aims to use a sophisticated machine that produces neutron beams to probe hair cells further. Utilising neutrons, the team will be able to achieve even higher resolution images to study the complex at the lower end of the tip links and how the proteins there interact. They hope to build a model of the protein complex in the laboratory and image it in a special type of electron microscope to work out where the proteins are in the complex and how they bind together.

The research team also wish to explore their findings in the context of hearing loss and damage. Professor Furness says, ‘we will then look at how mutations in these proteins affect the assembly of this complex and thereby understand better their role in hearing and hearing loss.’ 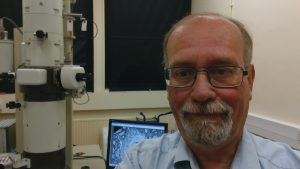 David Furness is a Professor of Cellular Neuroscience at Keele University where he conducts extensive research into the cellular mechanisms of hearing. Professor Furness completed an undergraduate zoology degree at the University of Manchester after being fascinated by microscopy as a child. After winning the Zoology prize for his third-year project as an undergraduate, he was offered a PhD position to continue his work into animal stomachs and the ultrastructure of rumen protozoa. Professor Furness then undertook a post-doctoral position at Keele University and was introduced to hearing research and the auditory system. In 1995 he was made Director of the Electron Microscope Unit (EMU) and contributed to the development of a new neuroscience course at Keele University for which he was course director until his promotion to reader in 2001. Professor Furness has most recently been promoted to a personal Chair in Cellular Neuroscience and is research lead for the School of Life Sciences at Keele.

S Mahendrasingam, R Fettiplace, KN Alagramam, E Cross and DN Furness, Spatiotemporal changes in the distribution of LHFPL5 in mice cochlear hair bundles during development and in the absence of PCDH15, PLoS ONE, 2017, 12, e0185285.