The great ice sheets of Greenland and Antarctica are currently undergoing change, and are losing ice through melt at an accelerating rate. With a significant amount of ocean water being trapped in land ice sheets, diminishing ice sheets mean a greater overall volume of water in the oceans. This could lead to a substantial rise in sea level, thus posing a serious threat to many low-lying coastal cities. The complexity and far-reaching nature of the problem of observing, understanding, and projecting changes in sea level means that scientists need to take an interdisciplinary and international cooperative approach, to a problem of high societal relevance. Professor David Holland, Denise Holland and their research teams at New York University in New York and Abu Dhabi combine field observations in the polar regions with state-of-the-art global climate models to better understand the impact of the disappearing ice sheets on global sea level.

They have established the Environmental Fluids Dynamics Laboratory (EFDL) at New York University in New York and the Center for Global Sea Level Change (CLSC) at New York University in Abu Dhabi in an effort to accelerate the pace of observing and projecting sea-level change. Although the hot desert climate of Abu Dhabi may seem like an unusual location for studying ice melting in Greenland and Antarctica, the fact that this city lies so close to sea level makes it particularly vulnerable to even a small rise in global sea level, as is also the case for New York. 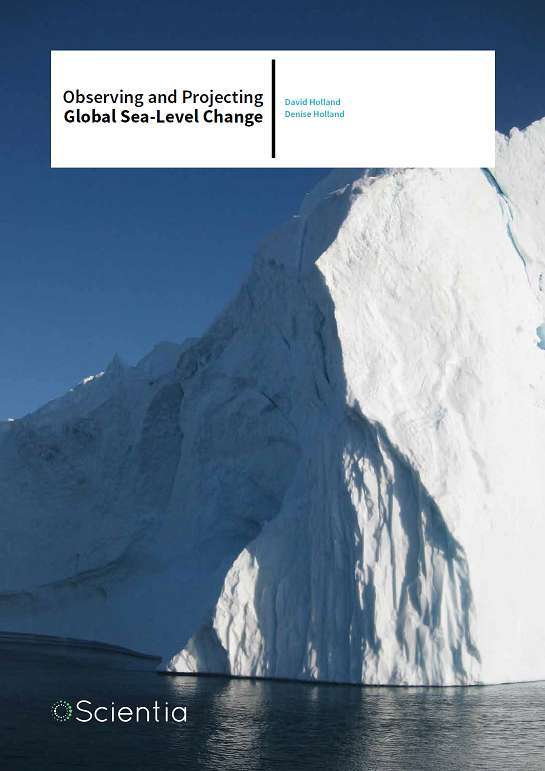 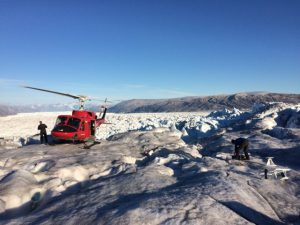 The EFDL and CSLC bring together global experts to understand past, and project future sea-level change, using a combination of observational data and computer models. As well as Professor David Holland’s roles as Director of the EFDL and CSLC, both David and Denise are involved in educational outreach activities, ranging from graduate level to high school to the public. The EFDL group annually participates in the World-Science Festival in New York, and the CLSC hosts conferences and summer schools in Abu Dhabi, educating the next generation of young researchers in this field of environmental science.

Denise is also responsible for overseeing organization of expeditions for members of their research teams to Greenland and Antarctic coastal waters aboard icebreakers such as the MV Adolf Jensen in Greenland and the RV Araon in Antarctica. Data acquired by team members, in collaboration with international collaborators, is invaluable in understanding the change occurring in these regions and in refining the accuracy of computer models of sea-level change. 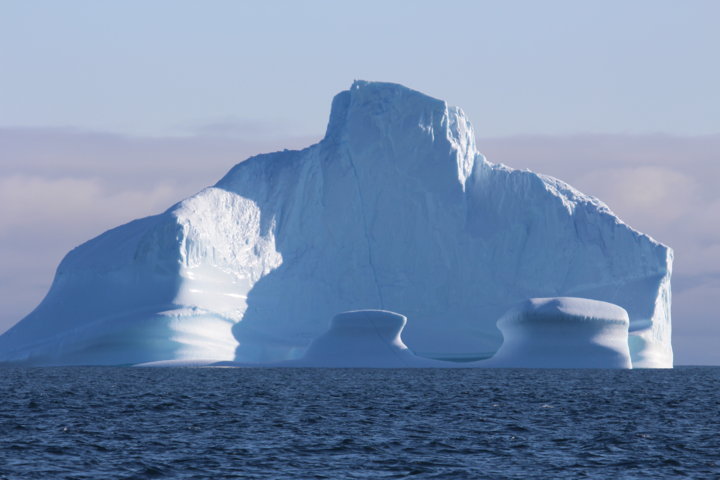 Often during these expeditions, the team needs to find creative ways to make observations in the hostile environments of the North and South polar regions. A great deal of the most interesting data is to be found at the edge of the ice sheet where it meets the ocean, a hazardous place where icebergs break off from the glacier front, dramatically falling into the ocean.

Ice sheets are formed by snow accumulating on land, a process that lowers global sea level. They flow toward the ocean under the action of gravity, where they can in places become floating ice shelves, yet still attached to the land ice from which they formed. It is the transition from being grounded on land to going afloat on the ocean that causes global sea level to rise. These ice shelves can then undergo fracturing events (known as calving) to form icebergs – free-floating masses of ice that vary wildly in size. Professor David Holland is particularly interested in the physical processes that occur during calving events, a normal and natural mechanism for ice sheet mass loss to the ocean. However, the recently observed collapse of entire ice shelves in both Greenland and Antarctica through accelerated calving is possibly a consequence of global warming, and perhaps a warning of more, similar events to come.

The Hollands and their teams use a variety of techniques to monitor ice loss and formation in various regions in Greenland and Antarctica. Expeditions by icebreaking ships are usually conducted during the summer, when light sea-ice coverage make such regions easier to access. The teams have been collaborating with residents in Greenland so that if weather and sea-ice conditions present an opportunity to investigate a certain area, the researchers can mobilize quickly, deploying probes and instruments to collect valuable data in short order.

Typical instruments used during these expeditions include ocean sea floor moorings and ocean gliders to record ocean temperature and salinity throughout the water column, yearlong. However, these devices are often challenging to deploy and recover due to icebergs in these areas or heavy sea-ice cover, or both, posing a serious risk to safe ship operation. An additional complication in instrument deployment or recovery is that these regions are virtually inaccessible during the colder parts of the year, leaving relatively narrow time windows in summer in which to operate. 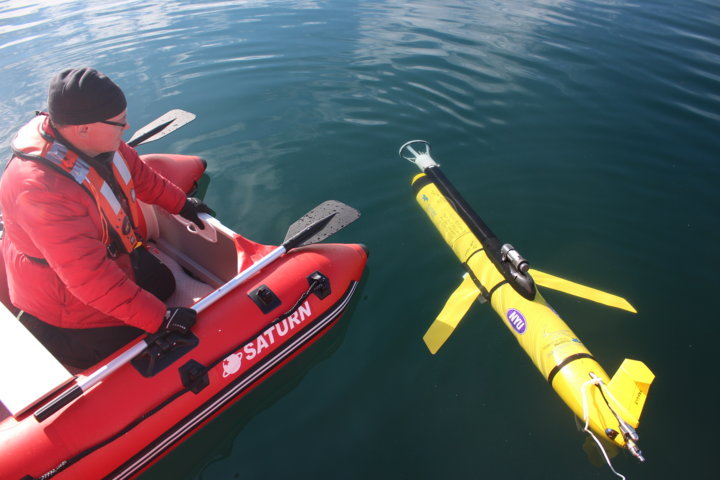 Activity at the glacier fronts are monitored using diverse instrumentation, ranging from seismic arrays to ground-based radars located on nearby rock outcroppings. Collectively, these devices can detect when and where any calving events in the glaciers have occurred, and provide information on the behavior of the glacier at that time. At present, the mechanism by which these calving events occur is largely unknown, and this is one of the uncertainties in a global climate model’s ability to project sea-level change. Consequently, it is imperative to accurately track the occurrence of calving and understand the underlying mechanism of fracture formation at the glacier front.

An unusual and surprising way to circumvent the dangers associated with investigating these unpredictable ice-choked areas is to recruit help from the local wildlife. In collaboration with the Greenland Institute of Natural Resources, the researchers catch and tag members of the local ringed-seal population with devices that can collect and transmit data on the local water conditions. Each time a seal dives down through the water column, and then returns to the surface, it immediately transmits data via satellite relay back to a computer server at New York University. The transmitted data provides a detailed vertical profile of the ocean’s temperature and salinity state. Being completely harmless, these tags have no impact on the seals’ quality of life and simply drop off when they undergo their yearly molt.

Because seals swim year-round in ice-covered ocean areas, often very close to the dangerous calving front, they provide observations that are unattainable by traditional ship or helicopter-based survey methods. These unique observations provide important information on water composition, for example, the amount of freshwater from glacial melt can be measured, as meltwater is fresh and thus has much lower salinity than ocean water. This data allows the researchers to build up an understanding of water composition and transport near the glacier, which have a strong influence on the overall melting of the ice sheets.

In combination with remotely-sensed data from international space agencies, the team’s various instruments are continually generating a wealth of data on the environmental conditions in the region. The team are confident that the quality and quantity of observational data being collected as part of their sustained monitoring strategy will lead to significant improvements in the accuracy of global sea-level projections coming from global climate models. 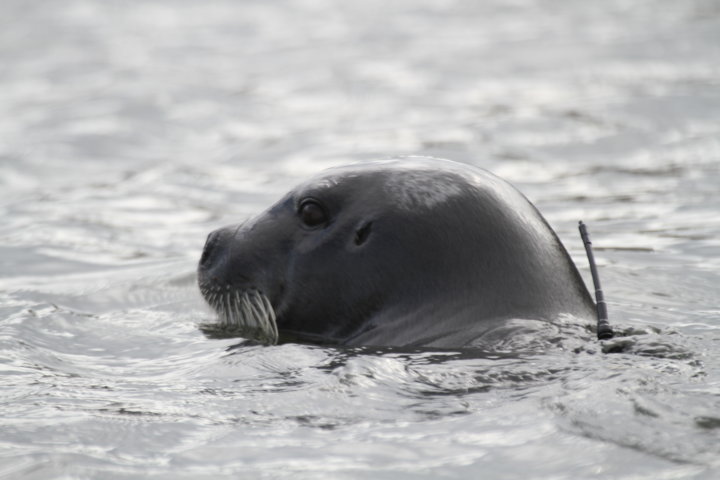 The observational data being collected in regions such as Greenland and Antarctica is key in developing accurate models to project future change in global sea level. Such climate models currently account for the interaction between various parts of the climate system such as the atmosphere, continental land, oceans, sea ice, and ice sheets, and thus reflect the complex interconnectivity of the global climate system. To date, however, they have an inadequate representation of the physical process near the glacier fronts. This is a consequence of the lack of observations in these places upon which such representation could be based and put into updated and improved climate models.

By having access to new, extensive observational data sets, the output simulations from climate models can now be compared to these data sets to see if the models accurately reproduce observed past change. If a model simulation is successful in such a hindcast mode, this improves confidence that the model is likely to be reliable in projecting future change, in a forecast mode. Such hindcasting can also highlight any deficiencies in the model, prompting the researchers to improve the mathematical description of the physical processes at work or to include additional physical factors that may be needed to reproduce the observed data.

David and Denise and their team have collected ocean data showing that warming waters unequivocally forced the collapse of a large ice shelf in Greenland. Based on that data, they have been working to more accurately model land ice interactions with warming ocean waters and to better understand how this affects the melting and stability of ice shelves. 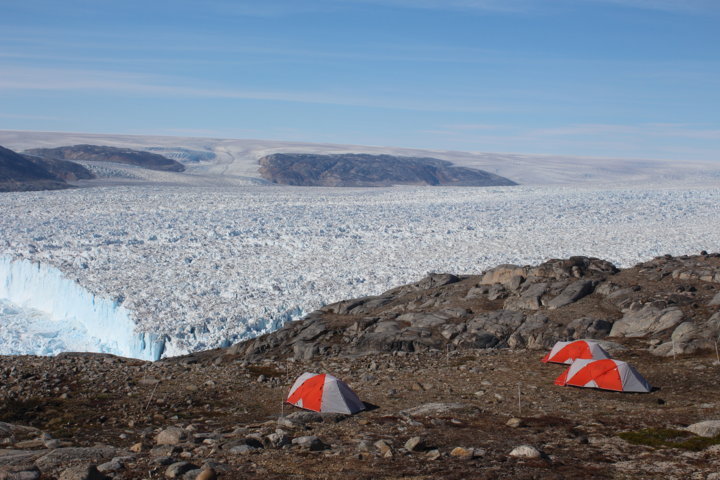 Land ice in both hemispheres is undergoing large change, as is clear from observations. This change could continue given the projected rising global temperatures due to greenhouse gas emissions further exacerbating global sea-level rise. If sea-level rise mitigation is to be effective, it is necessary to have accurate projections about which coastal regions are likely to be most affected, by when and by how much.

The team will continue to search for innovative ways to collect important observational data from such harsh and remote environments, an activity that is key to pushing forward the accuracy of sea-level projections from global climate models. Accurate projections are vital for coastal planners and policy makers in a world where significant sea-level rise is a looming possibility. 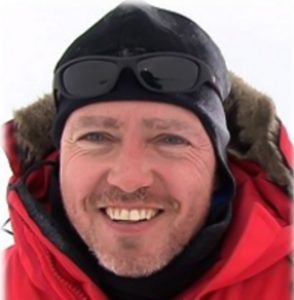 David Holland is Professor of Mathematics and Atmosphere-Ocean Science in the Courant Institute of Mathematical Sciences of New York University, and Director of the Environmental Fluid Dynamics Laboratory (EFDL). He is also Director of the Center for Global Sea Level Change (CSLC) of the New York University Abu Dhabi Research Institute. His work focuses on improving projections of global sea-level change through the collection of field data and the development of computer models that simulate the interactions of ice sheets with changing ocean water temperatures. He has published over one hundred peer-reviewed papers in the field of polar environmental science and was awarded an NSF Career Award in 2000 for his work on ice-sheet–ocean modelling. 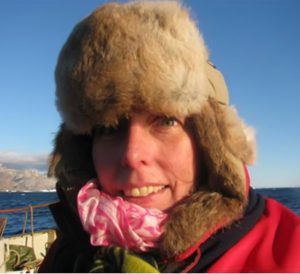 Denise Holland is the Field & Logistics Manager of the Environmental Fluid Dynamics Lab (EFDL) at New York University New York and for the Centre of Global Sea Level Change (CSLC) at New York University Abu Dhabi, coordinating David Holland’s research teams at both facilities. Her main role is organizing and participating in Greenland and Antarctic expeditions, as well as organizing summer field schools for undergraduate and graduate students. At both EFDL and CSLC she is also responsible for supporting research infrastructure capabilities and educational outreach activities in environmental science, particularly in the area of ice-sheet–ocean interactions.