Professor Gerald Reeck and his team at Kansas State University are investigating the molecular basis of aphid herbivory, including suppression of plant defences, using powerful methods of molecular genetics. This research is important for developing new aphid-pest resistance strategies for crop plants.

You have probably seen tiny green insects, about a millimetre in length, jostling on the stem of your back-garden beanstalk. These little critters are aphids, and they feed on plant sap. As sap-suckers, aphids occupy a special ecological niche, and the damage they inflict on crops does not endear them to farmers.

Aphids are typically fussy eaters, having narrow food preferences. For instance, the Russian wheat aphid feeds on wheat and barley, whereas the pea aphid is a pest of peas, beans and alfalfa. The appearance of aphids on the evolutionary scene predated the advent of flowering plants by 100 million years, so the first aphids are thought to have fed on more primitive plants. Aphids belong to the Hemiptera order of insects. All ‘hemipteran’ insects, including aphids, have specialised mouthparts called stylets, which allow them to pierce plant tissues and suck out the sap. 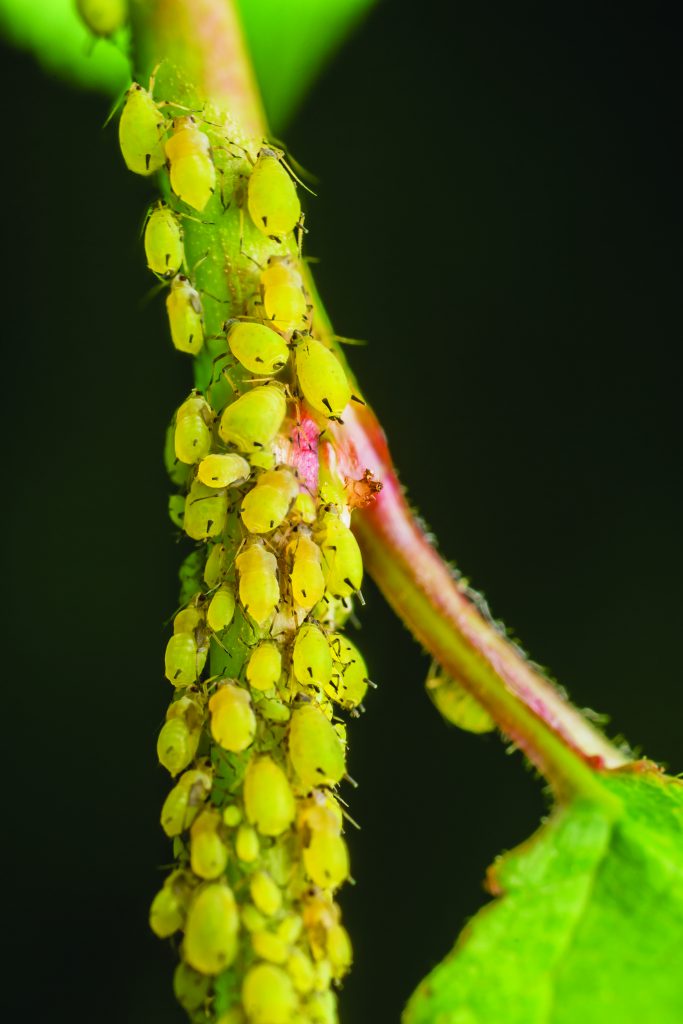 Plants make sugars and complex carbohydrates using Nature’s most basic ingredients – water, carbon dioxide from the air and photons from sunlight – during photosynthesis. Photosynthesis occurs mainly in the leaves, but the sugars produced here are required as a respiratory fuel by other tissues. Therefore, plants have a network of tubes, known as ‘phloem’, which is composed of columns of living cells known as ‘sieve elements’ that transport dissolved sugars and other biochemical compounds from the leaves to other tissues.

Aphids feed directly on phloem sap, by inserting their specialised mouthparts into the plant’s phloem and ingesting the sap by sucking. Plants are not too thrilled about their sap being tapped by freeloading aphids, and have evolved a number of defence responses against insects. Hemipterans, such as aphids, have in turn evolved strategies to evade plant defences, and for millions of years, plants and aphids have been locked in an evolutionary arms race.

The evolution of plant-eating insects is driven by the plants they feed on. The opposite is also true, as such insects have affected plant evolution – most obviously the development of flowering plants with insect-mediated pollination. Plants have evolved a molecular ‘immune system’ to defend against herbivores and pathogens. However, insects – as well as fungal and bacterial pathogens – produce ‘effector’ molecules that attempt to override the host plant’s defences to facilitate feeding or colonisation. This has given rise to an evolutionary ‘standoff’.

One of the numerous groups investigating these fascinating processes is led by aphidologist Professor Gerald Reeck at Kansas State University, who is attempting to elucidate the molecular interactions between aphids and host plants – using the pea aphid as a model organism. As the first aphid to have its genome sequenced, the pea aphid is a popular choice for studying aphid biology and aphid/plant interactions.

As several aphid species are serious agricultural pests, his team’s insights will be important in answering key questions about aphid biology, leading to improved strategies to control aphid infestations of crops. ‘Besides the fascinating issue of the co-evolution of aphids and their host plants,’ explains Professor Reeck, ‘the detailed nature of aphid feeding is important for developing new approaches (beyond treating plants with chemical insecticides) for controlling infestations by aphids and other hemipterans.’ 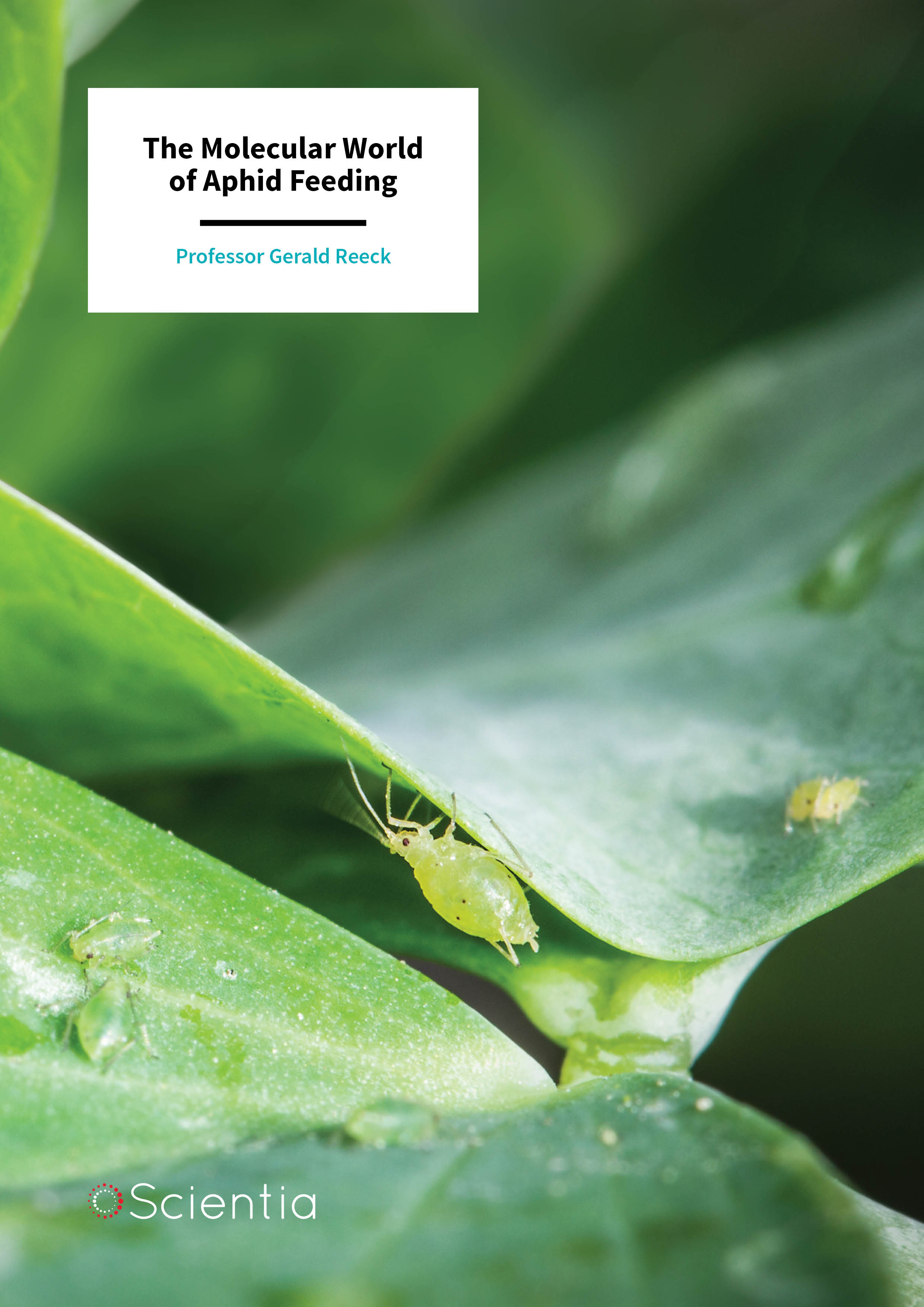 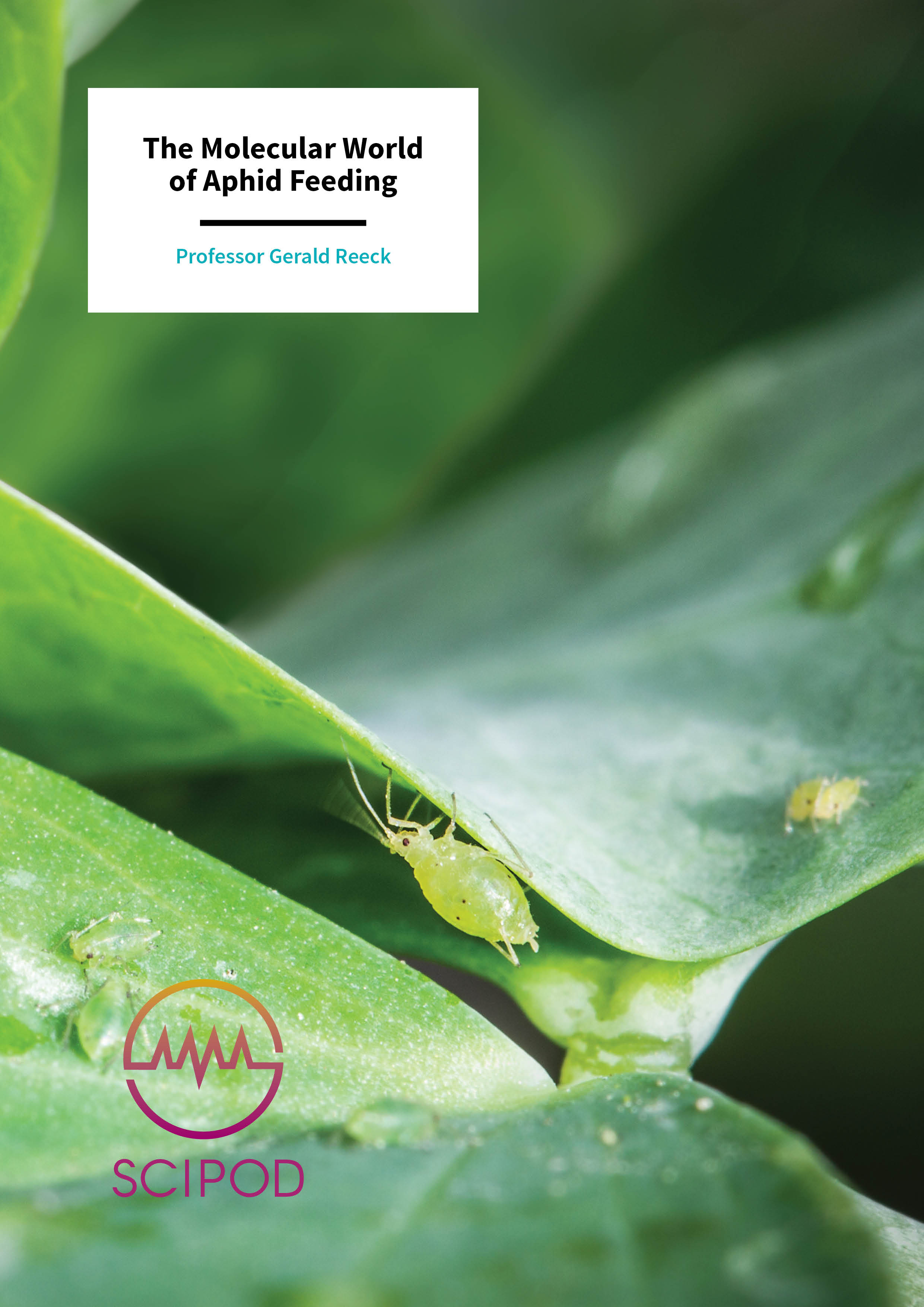 Aphid feeding is a precise and orchestrated process. When an aphid lands on a leaf or stem, it will typically spend up to 60 minutes initiating its feeding. This involves penetrating its stylet into the leaf, and probing through the intercellular space until it finds and punctures into a phloem sieve element. The aphid will then suck the sugary sap for up to several hours without re-positioning.

Traditionally, aphidologists have supposed that there are just two types of saliva, but Professor Reeck and his colleagues are developing the view that there are in fact numerous types of saliva. Aphid saliva can contain up to 100 different proteins – more than enough to create and secrete many different salivas, each with its own protein composition. 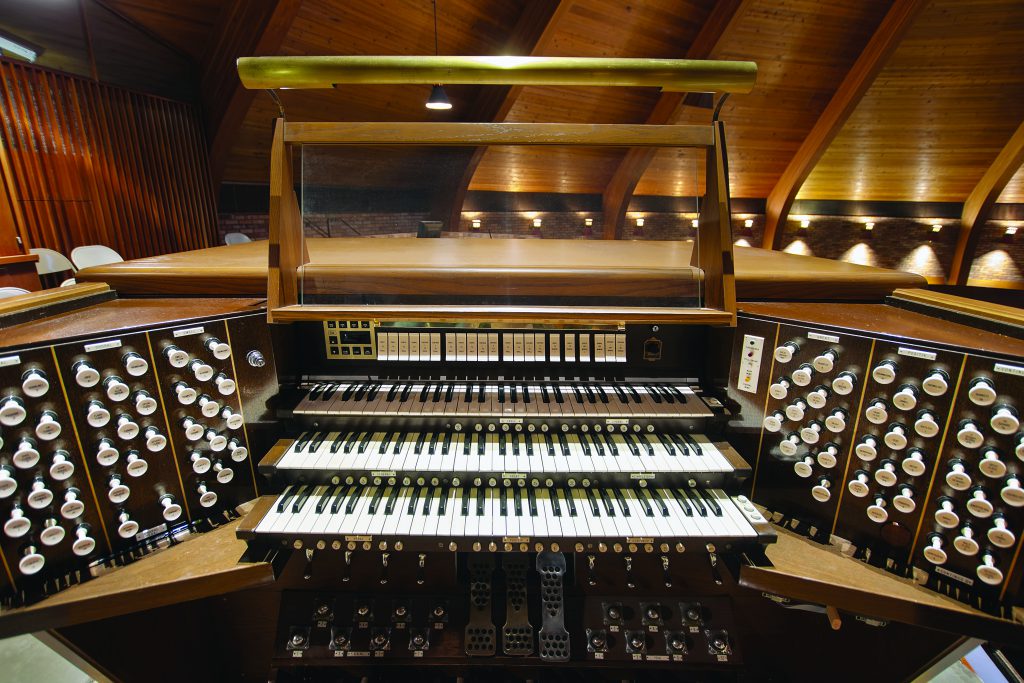 The console of a pipe organ with about 70 stops. The stops are the round knobs or buttons to the left and right of the keyboards. When pulled out, the stops activate pipes (not shown). The organist would typically select 10–20 stops as a group to create the sound desired for a given piece of music or for a particular passage from a piece. The pipe organ is the origin of the common phrase ‘pull out all the stops’, but in reality an organist would never do that, and Professor Reeck suggests that an aphid would never simultaneously express all 100 of the genes that encode proteins of saliva.

As well as enabling the aphid’s fairly complicated pursuit of a sieve element and tapping into the ‘life-giving elixir’ that is phloem sap, aphid species often feed on various host plants. Sometimes, aphids attempt to resort to feeding on non-host plants if their preferred foods are not available. This ability to secrete saliva with differing protein compositions is therefore seen as an evolutionary trait allowing aphids to adapt to feed on several different plant species.

Powerful Approaches for Studying Aphid-Plant Interactions at a Molecular Level

An organism’s proteins are encoded by its genes. During gene expression, the information in the genes (DNA) is ‘transcribed’ onto messenger RNA molecules (also called ‘transcripts’) that dictate the order in which amino acids join together (and their specific order, or sequence) to form individual proteins. Using a ‘transcriptomics’ approach, Professor Reeck’s team studies the sequences in transcripts for the proteins of aphid saliva (the transcriptome). From this information, they infer the amino acid sequences of the individual proteins in aphid saliva. They call this collection of proteins the ‘saliva secretome’.

As well as sexual reproduction leading to females laying fertilised eggs, aphids also reproduce asexually. Adult asexual aphids produce nymphs, which grow into adults. The offspring are all female and clones of their mothers – with no males involved! When host plants are abundant, either in nature or in the laboratory, asexual reproduction by aphids can result in hundreds of aphids feeding on an individual plant. In the lab, this asexual reproduction is a useful feature for producing large colonies for scientific studies. 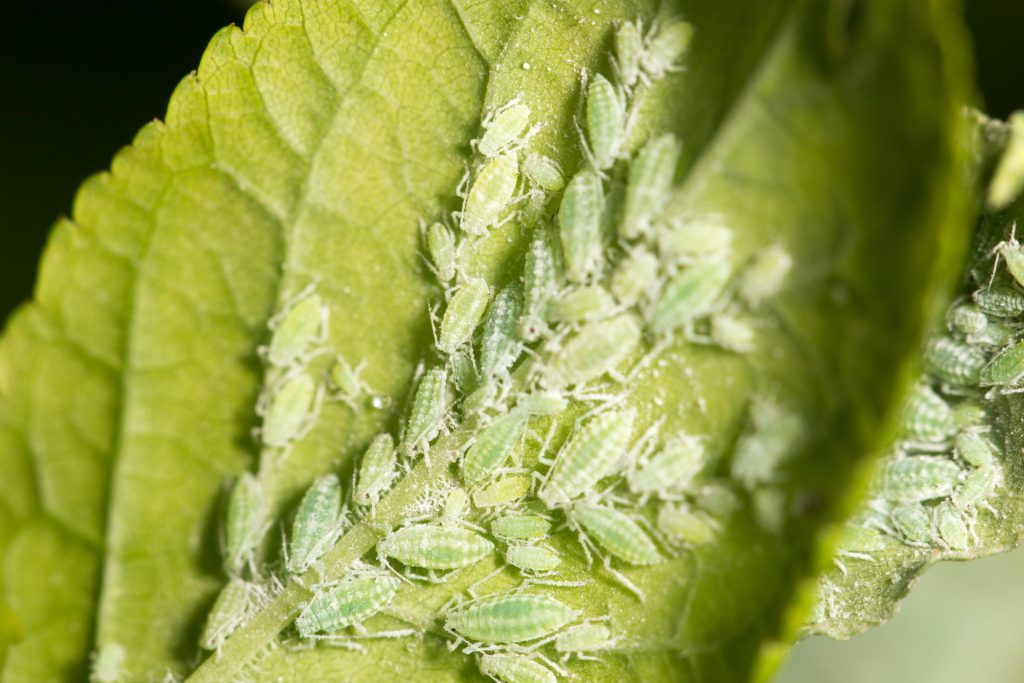 Pea aphids are fragile, soft-bodied and tiny – about the size of a grain of sand! To study the proteins in their saliva and the encoding transcripts, Professor Reeck and his team dissect the salivary glands of several hundred pea aphids. To analyse the transcriptome, the team extracts all of the RNA from the dissected salivary glands, and using a technique called ‘reverse-transcription PCR’, creates a ‘library’ of corresponding DNA molecules. (This is essentially the reverse of what happens in cells, where the information in DNA is transcribed to produce messenger RNA during gene expression.) The resulting DNA library is subjected to sequencing to identify mRNAs that encode proteins of saliva.

So, how can we learn about the role or importance of an individual protein in feeding on a host plant? One of the most powerful approaches is called ‘transcript knockdown’. Using this technique, scientists can deplete aphids’ salivary glands of the mRNA that codes for an individual protein. Professor Reeck and his colleagues made the first finding of this sort in aphids by applying this technique to a protein that they call Protein c002. By injecting a piece of double-stranded RNA (dsRNA) into many individual aphids (and injecting control insects with an innocuous dsRNA), they demonstrated that Protein c002 is required for the pea aphid to feed on bean plants. They also found that the death of the c002-targeted insects was similar to death by starvation. The team has more recently obtained similar results for a protein called Armet, and further injections of dsRNA are underway in Professor Reeck’s laboratory (and other labs as well).

Aphid infestations can cause significant damage to several major crop plants. And if we expand our horizons a little, the same can be said of other hemipteran species such as planthoppers, leafhoppers, whiteflies and psyllids. Currently, the main approach for controlling all of these hemipteran pests involves the use of chemical insecticides. We might ask whether we can develop another type of tool, one that will not contaminate the environment with chemicals.

A possible approach involves genetically engineering aphid-resistance into crop plants. This approach has been spectacularly successful for controlling other (non-hemipteran) insects. For instance, maize with excellent resistance to the corn earworm has been created by placing, in the plant’s genome, a bacterial gene that encodes a protein that is toxic to lepidopteran insects. However, scientists have yet to find bacterial proteins that are toxins for hemipterans.

Therefore, we must find a different type of gene to introduce into the genome of, say, alfalfa to provide resistance against the pea aphid. ‘One possibility is to create a gene that would produce dsRNA in the plant, particularly in the phloem sap,’ says Professor Reeck. ‘If the dsRNA were targeted at a crucially important aphid protein, the aphid would be taking in a sort of poison in sucking phloem sap from the engineered plant.’

Work in Professor Reeck’s lab and other labs around the world suggests that we might be able to identify attractive targets in the saliva proteome of an aphid species. Indeed, Protein c002 might be just such a protein. It would be relatively straightforward to synthesise a dsRNA-encoding gene targeted at Protein c002. The expression of this gene, when incorporated into the pea aphid genome, would result in dsRNA being deposited in the phloem sap, which would be imbibed by the insect. Finally, the dsRNA would need to become distributed throughout the aphid and some of it taken up by secretory cells of the salivary glands in order to knock down Protein c002’s transcript. This could lead to death of the aphid, or at the very least, to decreased fecundity.

‘Our current results suggest that dsRNA in the diet (even when protected by protein capsules called BAPCs) does not become distributed throughout the aphid but remains in the gut,’ says Professor Reeck. ‘We are currently working to circumvent this problem and thus open an era of genetically engineered resistance to aphids.’ 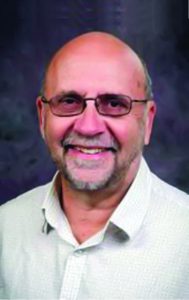 Gerald Reeck received his PhD in biochemistry under the supervision of Hans Neurath in the Department of Biochemistry at the University of Washington in Seattle. He then did post-doctoral research at the National Institutes of Health, where he studied non-histone proteins of chromatin. Since 1974, he has been on the faculty at Kansas State University. He began investigating the biochemistry and molecular genetics of insects in the early 1990s, having been drawn into the field by Professor John Reese of the Department of Entomology at K-State. Their laboratories’ joint contributions have been in the transcriptomics of salivary glands of the pea aphid and the use of transcript knockdown through RNAi in the same species. More recently, Professor Reeck has turned his attention to the feeding of dsRNA by forming complexes with peptide capsules as developed by another K-State colleague, Professor John Tomich.