Professor Jeffrey Forbes and his team at the University of Colorado use data from multiple satellites and global modelling to determine how terrestrial weather affects the near-Earth space environment.

When we think of the weather, we think of the wind and rain and the climate generally ­– down here close to the ground. Perhaps some weather happens up in ‘the sky’, where we see jet airplanes leaving contrails amongst the stratus clouds. But higher than that and we get into space, where satellites and meteors travel out of our sight. We think of weather down here as different and separate from space up there. But that would be a mistake. There’s a lot going on in space, particularly close to the Earth’s atmosphere, and our weather influences the conditions in near-Earth space to a great degree.

The Earth’s atmosphere itself is a complex and dynamic system that can be thought of as existing in layers, each layer having different temperature characteristics. Closest to the ground and what we usually think of when we talk about the weather is the troposphere, comprising about three quarters of the atmosphere and reaching between 10 and 15 kilometres from the surface. Next is the stratosphere, which contains the ozone layer, buffering us against most of the ultraviolet rays from the Sun. Above the stratosphere lies the mesosphere – beginning at about 50 kilometres above the surface and the coldest layer of the atmosphere. Then there’s the thermosphere, the layer that encompasses the ionosphere, where molecules are ionised by solar radiation, above about 90 kilometres from the surface. And finally, there’s the exosphere, the extended layer at the very top of the atmosphere where particle collisions are infrequent. In an aerospace context, the ‘line’ between the atmosphere and space is roughly about 100 kilometres above the surface, and is known as the Kármán line. Scientifically, this is where things get interesting, because Earth’s magnetic field begins to exert its influence.

Well above the ionosphere, charged particles emitted from the sun – the solar wind – interact with the Earth’s magnetic field – the magnetosphere – to initiate a chain of events that ultimately deposit energy into the high-latitude regions of the ionosphere and thermosphere and form a complex system of ‘space weather’. In this region, fluctuations in space weather conditions can cause an array of problems here on Earth, such as power outages and the disruption of communication systems. It is in this region that Professor Forbes and his colleagues focus their attention. ‘Our research entails studying how traditional weather and other lower-atmosphere processes influence this region through the vertical propagation of waves,’ he explains. ‘We also investigate how disturbances on the Sun influence this region through extreme ultraviolet radiation and through massive ejections of charged particles from the Sun that interact with Earth’s magnetic field to deposit energy.’

‘‘This field of study is interdisciplinary, requiring the study of atmospheric dynamics, electric and magnetic fields, chemistry, and collisions between neutral and charged particles’’ 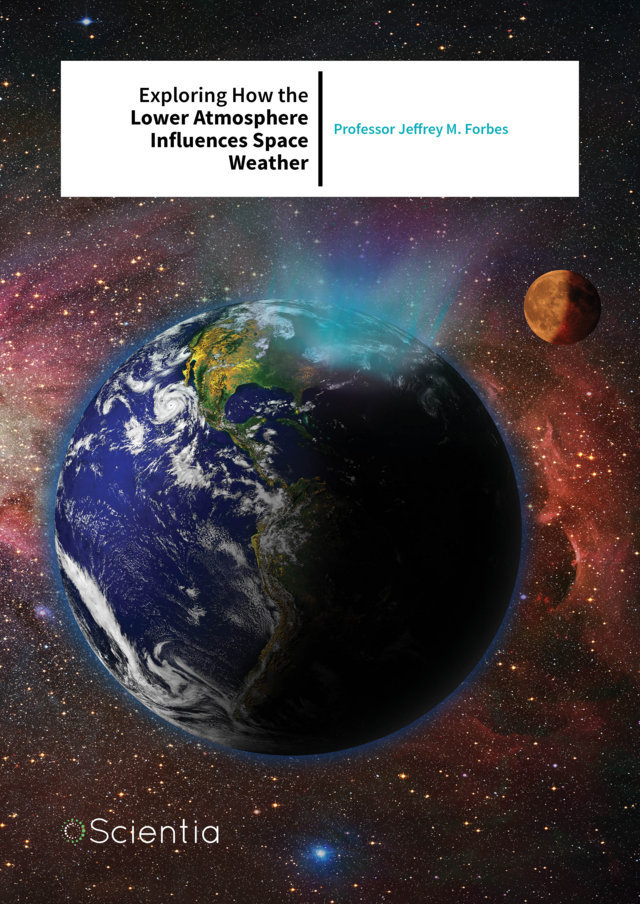 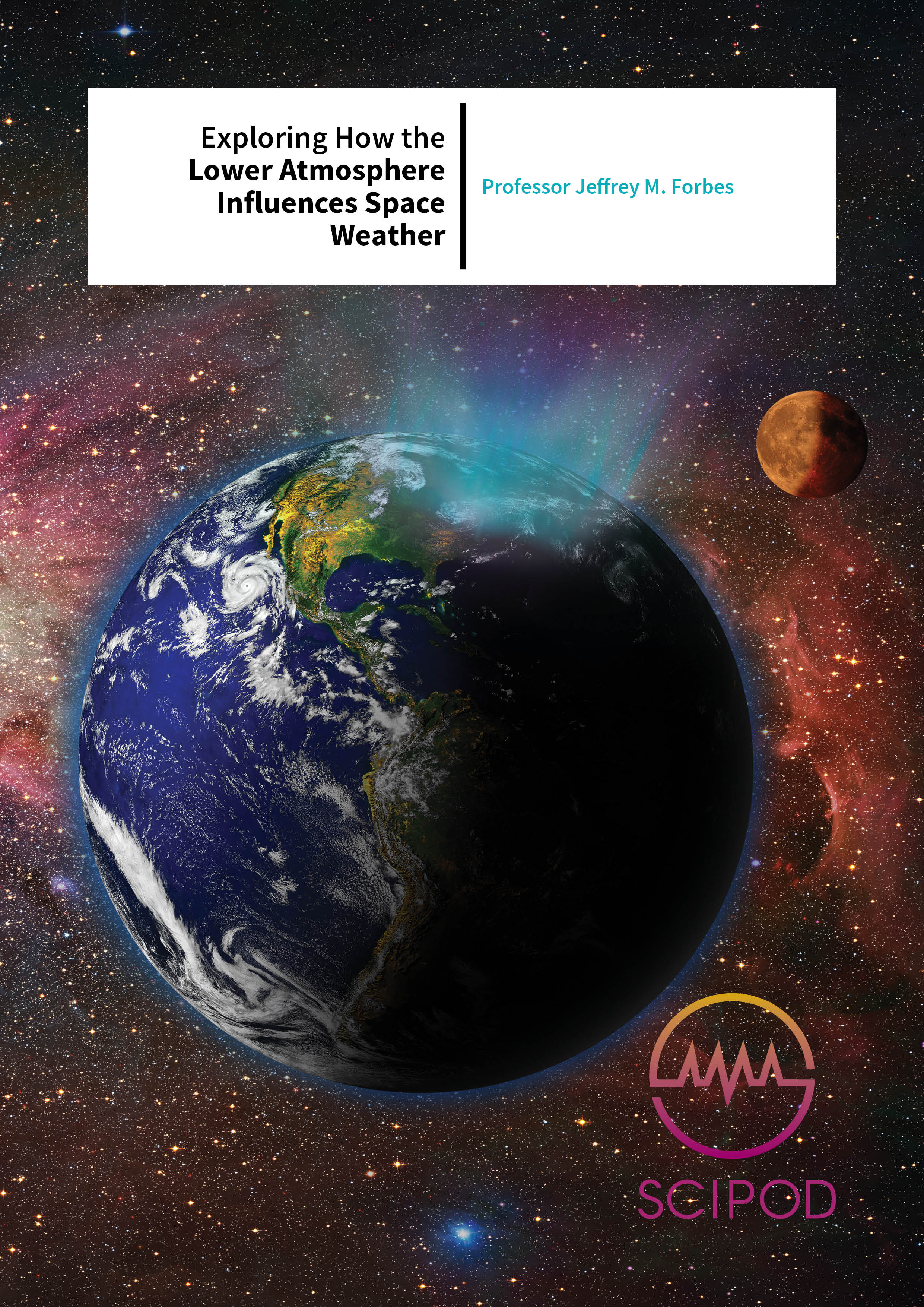 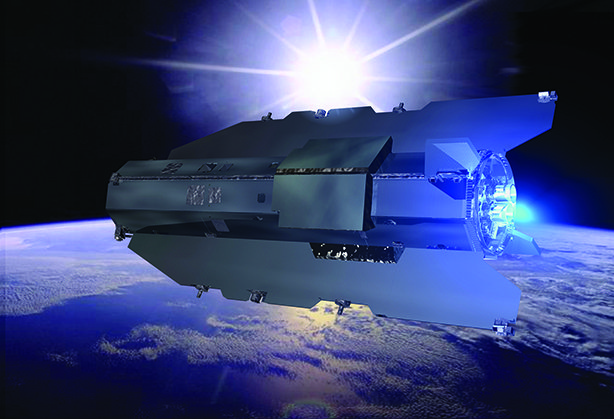 Getting Started by Fantasising About . . . Rockets?

Together, the interaction between the various atmospheric regions and the ionosphere is what Professor Forbes regards as one big ‘Atmosphere-Ionosphere system’, or ‘A-I system’. He calls the region of the A-I system that stretches from between about 80 and 150 kilometres from the surface the ‘atmosphere-space interaction region’. This is where much of the energy from the Sun and near-Earth space environment ­– often called ‘geospace’ – is transferred to the atmosphere, and where vertically-propagating waves interact with the Earth’s magnetic field to generate electric fields that oscillate about in the higher altitudes and transport charged particles. Originally, though, Professor Forbes wasn’t planning to study the atmosphere and space weather.

From engineering in Rhode Island and Illinois to meteorology at MIT to the physics of atmospheric solar tides at Harvard, Professor Forbes didn’t scrimp on training broadly for this career. One thing he says he loves about this area of science is that ‘this field is interdisciplinary, requiring the study of atmospheric dynamics, electric and magnetic fields, chemistry, and collisions between neutral and charged particles.’ Together with applying multiple disciplines of science to his work, his purview encompasses the entire planet. To get a proper picture of the atmosphere and its interaction with space weather Professor Forbes analyses satellite-based data, and crunches global numerical computer models. He wants what he calls a ‘global perspective’. 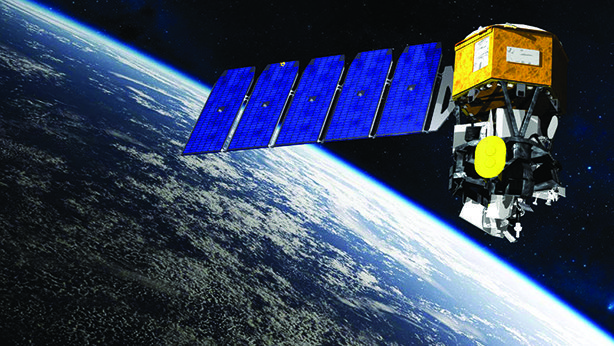 The global perspective that Professor Forbes and his team gain from this satellite data is important for reasons that are quite practical. The ebbs and flows of plasma in near-Earth geospace can have significant deleterious effects on the function of many of our communications, surveillance, and geolocation systems, such as our world-wide Global Navigation Satellite System signals. We need satellite astronomical and aeronautical location data to allow us to locate and predict the paths of orbital debris, to allow us to avoid collisions with space junk, and to calculate re-entry paths. Professor Forbes feels that the ‘practical relevance of this aspect of space weather to our 21st-century society motivates and intensifies’ his desire to understand and predict the weather processes of the A-I system.

We are all familiar with the television weather forecaster’s description of such things as high pressure waves, low pressure waves and jet streams, causing this or that weather. These atmospheric waves are important for us here in the troposphere, the lowest part of our atmosphere where weather occurs, but the effects don’t stop there. Just as a boat rises and falls as the water waves propagate beneath it, the upper atmospheric levels become disturbed when waves propagate upward from disturbances in the troposphere. Professor Forbes and his colleagues are interested in how lower atmospheric waves interact with and transfer energy to the upper levels of the atmosphere, such as the ionosphere and its ocean of highly charged particles. This is where the rockets come in.

Professor Forbes’ work consists in large part on using measurements from the TIMED, CHAMP, GRACE and GOCE satellites – launched by rockets, of course – to get his global perspective of the A-I system and on how the upper atmospheric layers respond to both meteorological influences in the lower atmosphere, and to energy originating from the Sun. His team has been focused more recently on waves that originate at lower altitudes, and how they affect the atmosphere-space interaction region. 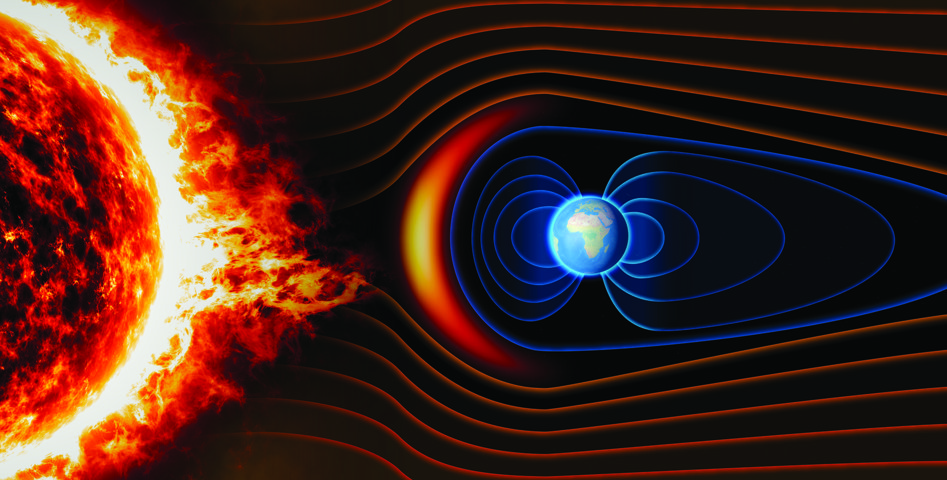 The satellites his team use for their data collection have been busy. The TIMED satellite – short for Thermosphere Ionosphere Mesosphere Energetics and Dynamics – is a satellite designed by scientists at Johns Hopkins University and launched by NASA in 2001 to take measurements of the mesosphere and lower thermosphere. TIMED’s mission has been extended several times and it still provides vital data. The CHAMP satellite – short for Challenging Minisatellite Payload – was launched from Russia by a German group to measure various parameters in the ionosphere and monitor space weather, before completing its mission in 2010. The GRACE satellite – or Gravity Recovery and Climate Experiment – is a joint mission between NASA and the German Aerospace Centre to measure gravitational anomalies across the globe. Launched in 2002, GRACE data is important in the study of Earth’s climate, geology and ocean tides. Finally, the GOCE satellite – the Gravity Field and Steady-State Ocean Circulation Explorer – launched by the European Space Agency, provided data from 2009 until 2013 on gravitational gradients related to ocean currents, the Earth’s mantle and volcanic activity.

The analysis of data from all of these satellites has proven invaluable to Professor Forbes and his colleagues in their quest to understand the relationships between Earth’s weather and space weather. This work has allowed them to uncover how atmospheric waves propagate upward and cause variations and perturbations in the conditions of near-Earth geospace. 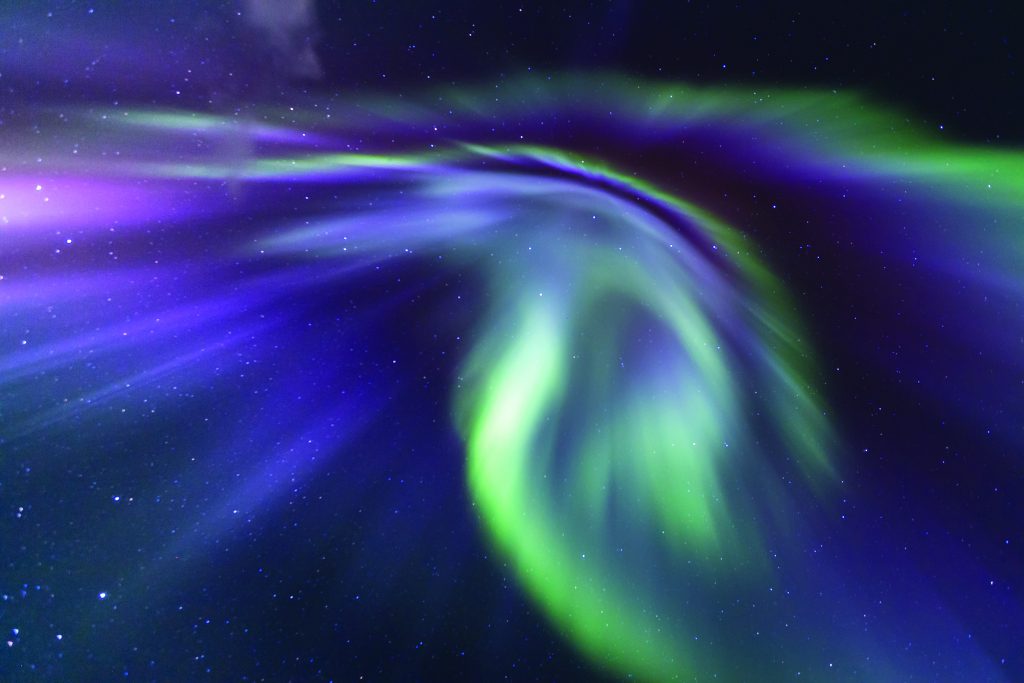 Recently, a PhD student of Professor Forbes, Federico Gasperini, analysed data from the TIMED, CHAMP and GOCE satellites to show that waves excited in the lower atmosphere by tropical heating travel very high in the atmosphere, effectively linking lower atmosphere activity with the atmospheric drag that satellites experience. From his calculations, Gasperini concluded that between from 60% and 80% of the total variability in the thermosphere (during a time when the Sun was relatively quiet) can be traced back to vertical waves from the lower atmosphere, while only 10–20% is due to solar and geomagnetic effects. The remaining 10–20% of the variability was due to other processes that were unclear.

In any event, Gasperini, along with Professor Forbes and his colleagues, has proven that there is a large coupling effect from the lower atmospheric conditions – our weather – and activity in the upper levels of the atmosphere that interact with near-Earth space weather. Not only do the conditions in space – primarily the result of the solar wind interacting with the Earth’s magnetosphere – have an effect on Earth’s upper atmosphere weather, but Earth’s lower atmosphere weather can have a vertical effect on the conditions up there, in geospace. It’s a complex and synergistic system that warrants further study. Of course, further study is already in the works. 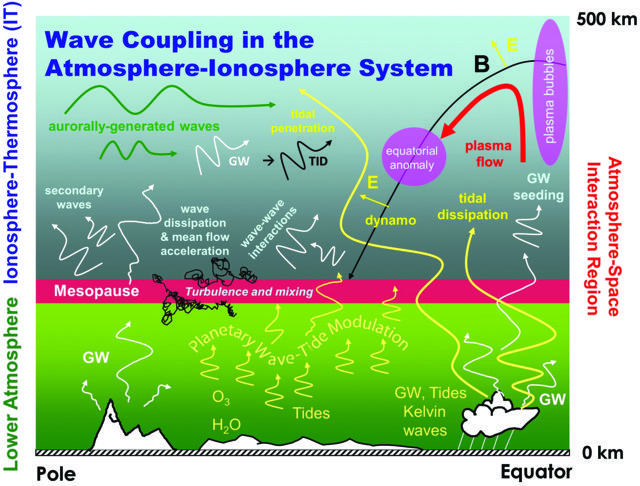 Energy and momentum are transferred from one point to another within the atmosphere-ionosphere system through the generation and propagation of wave. In the ionosphere wind perturbations associated with the waves can redistribute ionospheric plasma, either through the electric fields generated via the dynamo mechanism, or directly by moving plasma along magnetic field lines. Adapted from Figure 8.10, Solar and Space Physics Decadal Survey, National Academy of Sciences, 2012.

Plans for Studying Near-Earth Space in the Near-Future

Plans for the immediate future are promising. Professor Forbes has recently been funded by NASA and the NSF to use the Thermosphere-Ionosphere-Mesosphere Electrodynamics General Circulation Model (TIME-GCM) developed at the National Center for Atmospheric Research to numerically isolate the components of the ionosphere/thermosphere system. The TIME-GCM program is a 3-D time-dependent model of atmospheric conditions that reaches from about 30 kilometres above the surface to altitudes of 500–600 kilometres. The model simulates the circulation, temperature, electrodynamics, and compositional structure of the mesosphere, the thermosphere, and the ionosphere. The results of this model will enable the team to construct more specific models that take into account the massive data available from the various satellites. Professor Forbes says they hope this material will help them ‘understand wave-wave interactions and other sources of complexity in the A-I system.’

Professor Forbes also plans to spend time using the unique data expected from the upcoming ICON mission. ICON – NASA’s Ionospheric Connection Explorer, expected to be launched in mid-2017 – is specifically designed to collect data from the atmospheric levels where Earth weather and space weather collide. This is right up Professor Forbes’ alley, and he thinks this mission will greatly advance our understanding of how waves of the lower atmosphere drive conditions in the ionosphere. Beyond ICON, Professor Forbes tells Scientia that his future research ‘depends on which of my pending proposals are funded, and what emerges in the field that strikes me as interesting and challenging.’ When the sky’s the limit, you have lots of options. 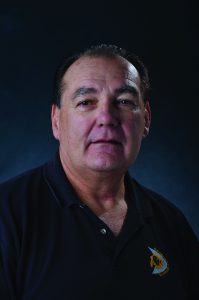 Professor Jeffrey Forbes received his PhD in in Applied Physics in 1975 from Harvard University in Cambridge, Massachusetts, for a dissertation entitled ‘Atmospheric Solar Tides and Their Electrodynamic Effects’. After a number of research scientist and faculty positions – including service in the US Air Force and Air Force Reserve where he reached the rank of Lieutenant Colonel – in 1993 Professor Forbes joined the faculty of the University of Colorado in Boulder, where he is now Professor of Aerospace Engineering Sciences and holds an endowed chair in the College of Engineering & Applied Science. His research interests include planetary upper atmosphere environments, atmospheric coupling to lower altitudes, geomagnetic storm effects on the variability of satellite drag, and vertical propagation of tides and planetary waves. Professor Forbes has authored or co-authored nearly 350 articles published in peer-reviewed journals and other professional publications, as well as presented numerous papers at scholarly meetings.