The Florence Renaissance was a time of unprecedented innovation across multiple domains of culture, science and politics. The causes of such widespread advances are often debated, and difficult to pin down. Professor John F. Padgett uses social network analysis to illuminate how borrowing tactics from seemingly unrelated social phenomena converged to facilitate revolutionary change across Florence.

A Time for Innovation

The Renaissance in Florence, Italy was one of the most innovative times and places in western Europe, generating world-altering advances in art, political thought, science, banking, public finance and republicanism. Scholars have long sought to understand the social context in this city that produced not only particular innovations, with their own local histories, but also spill overs in innovation from one domain to another.

Using primary archival sources, Professor John F. Padgett of the University of Chicago has devoted 30 years to assembling a database that traces the historical evolution of multiple social networks in the city, among about 80,000 persons over 150 years (1350–1500). These range from kinship and marriage networks, to economic partnerships and commercial credit, to political elections, factions, and public debates. This research has been funded by the US National Science Foundation, the Hewlett Foundation, and the Neubauer Collegium.

Inspired by the biological sciences, where relationships between molecules within an organism, and organisms within an ecosystem, are often context dependent and best understood through network representations, Professor Padgett’s work seeks to understand how complex social networks facilitated innovation in Renaissance Florence. As with a biochemical reaction, innovations in one social network were often catalysed by activity in adjacent social networks.

In a series of studies into each of the evolving social networks listed above, Professor Padgett and his team have identified an organisational innovation or change of focal interest, and have situated that innovation in the multiple-network context of its production. For example, if focal attention is on banking innovation, Professor Padgett and his collaborators reconstruct in person-by-person detail not only the economic networks of those bankers, but also their kinship and political networks. Florentines, after all, were the historical source for our current stereotype of ‘Renaissance Men’ (and perhaps not as many women as we would like, but some). 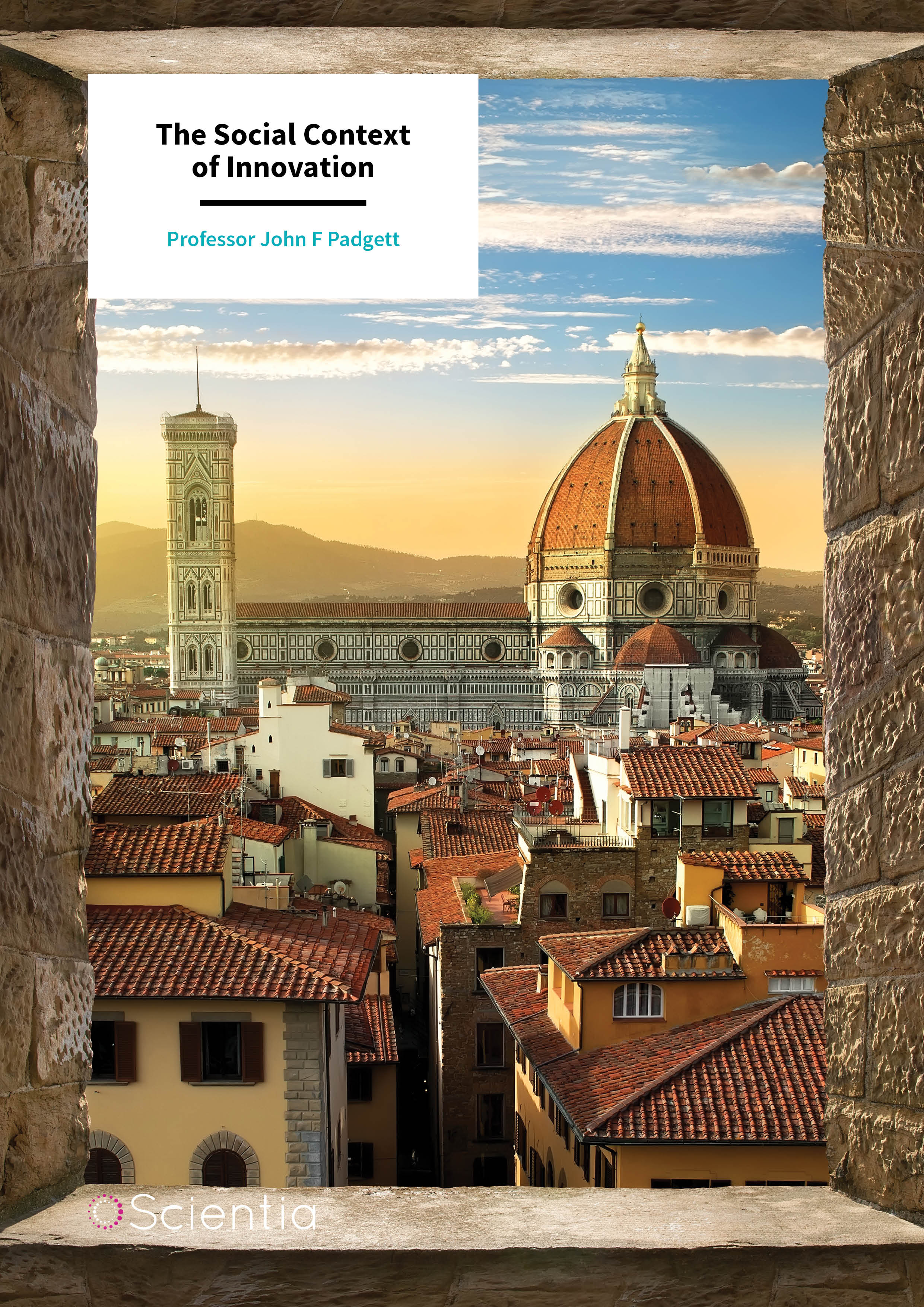 Though revolutionary innovations often appear to have sprung from thin air, the team’s work demonstrates that they are often the product of a combination of forces that may seem unrelated on the surface. These networks illuminate factors adjacent to an innovation that shaped its emergence and ultimate form. 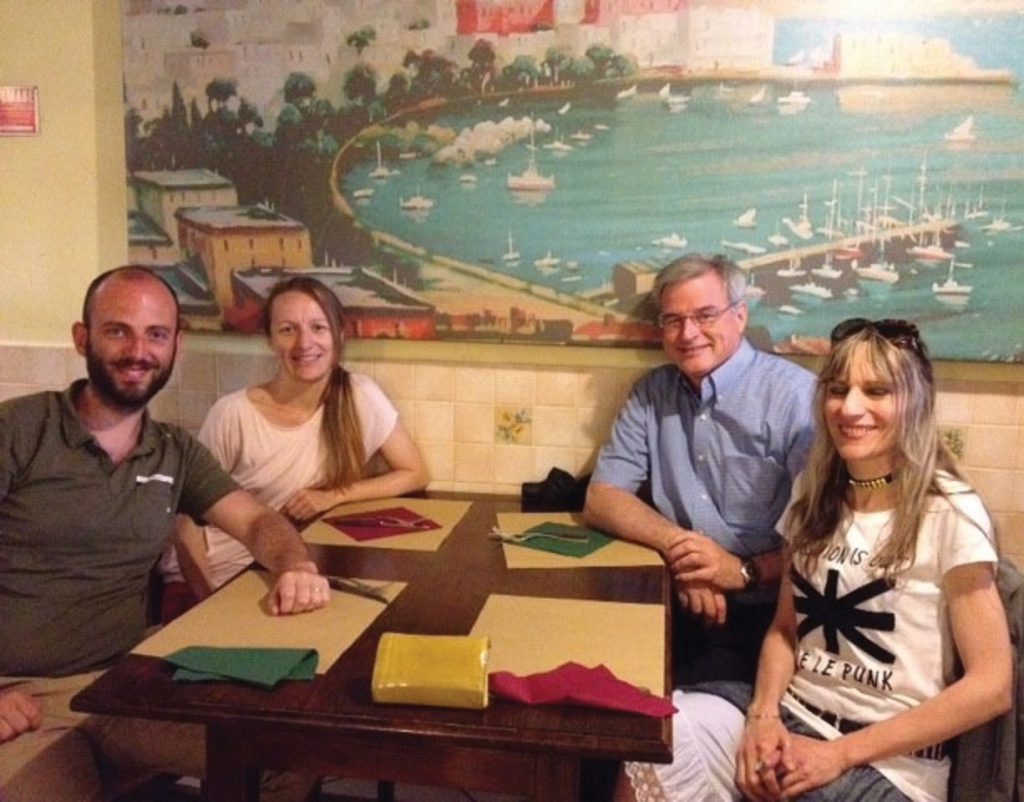 In a study of the rise to power of Cosimo de’ Medici, the founder of the Medici political dynasty during the Florence Renaissance, Professor Padgett traced the unusual degree of centralisation of this revolutionary faction in the marriage- and business-network social foundations of its emergence. This unique example represents Florence’s transition from the late medieval tradition of numerous urban political factions to the birth of a united Renaissance state.

Prior to Medici, Florentine politics consisted largely of competition between guilds and wars between urban feudal houses. Professor Padgett and his colleagues focused on Medici’s ‘social embeddedness’ – the ways in which his social relationships shaped and enabled his rise to power to form the Florence state.

Cosimo de’ Mendici had many vocations and connections, and was a member of both elite marriage networks and numerous business partnerships, which allowed him to behave opportunistically in each of his circles to shape interactions between them. Since he was the singular point of overlap between some of these circles, he was at low risk of being found out when supplying contradictory information to different groups.

This allowed him to take robust action when opportunities to advance his own interests or hinder his opponents’ power presented themselves, ultimately moving the Medici family into a position of power over a much broader region than ever before. Through his social connectedness, Cosimo de’ Mendici was able to leverage the existing system of inter-guild and inter-family feuding to create an entirely new system. 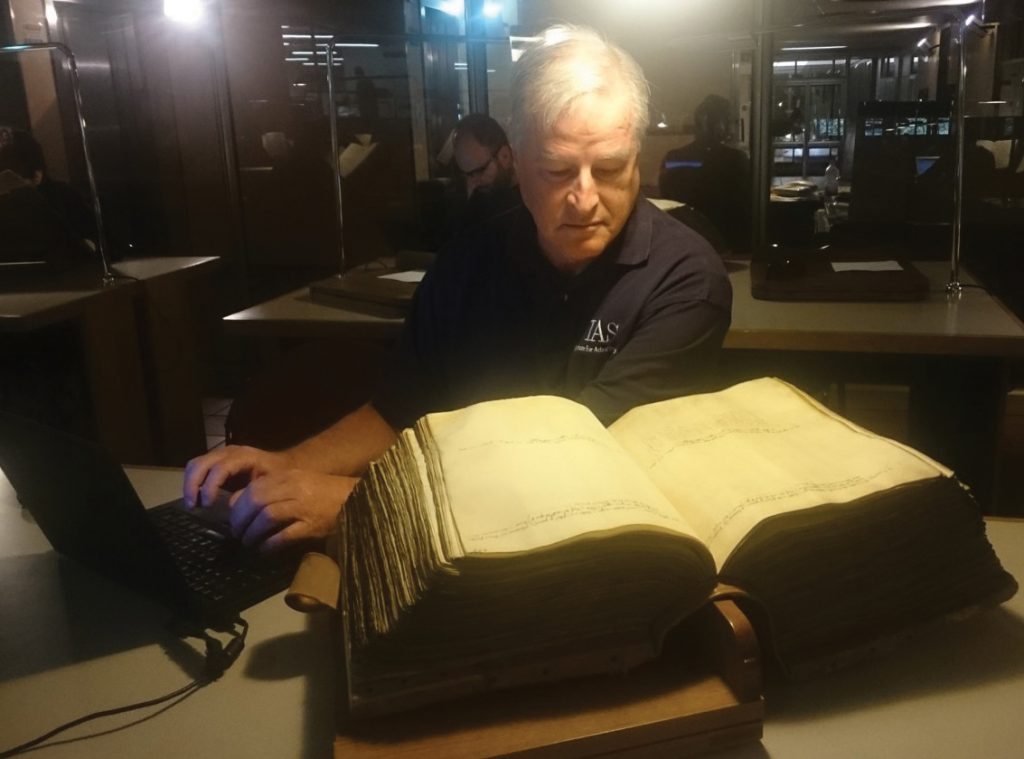 Economics Shaped by Family and Friendship

In the 1380s, a new form of business organisation emerged in Florence – the partnership system. For the first time, rather than companies being exclusively run by a single person or family, businesses emerged with multiple legal owners or partners from different families.

These partnerships formed the basis for financial capitalism by protecting business owners from financial ruin in the case of a business failure. It also allowed companies to simultaneously become more generalist and more specialised: the overarching company could cover many markets, while the various partners could specialise in their market within the company. 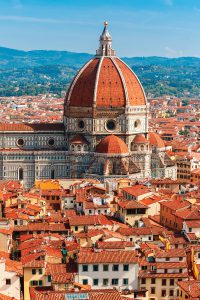 Through a network analysis inspired by biochemical pathways, Professor Padgett found that the business innovations in this case were not strategized, rather an unintended consequence of repression of class revolt. Prior to the partnership system, businesses were based primarily on paternal inheritance or membership in a guild. As these systems became destabilised in a changing urban political environment, marital ties and client pressure began to determine the direction of businesses. This reorganisation of elite social networks to favour victorious pairings encouraged the partnership system to emerge.

Another critical innovation in capitalism was the development of economic credit. Personal credit pre-existed (and continued in) the Renaissance, but in Florence a business system emerged by which companies vastly expanded their offering and tracking of credits and debits of goods through double-entry bookkeeping.

By analysing records of credits and debts between Florentine businesses along with marital and political ties, Professor Padgett and his team were able to construct a more complex understanding of how the credit system emerged. As with many of Florence’s innovations, social ties played a major role. The public reputation and social status of a business owner influenced their ability to secure a loan. Friendship and kinship were the initial determiners of who got credit or not, but increasing tax scrutiny from an evolving political landscape eventually forced the formalisation of a mathematically advanced credit system.

These Florentine multiple-network-rewiring processes have been generalised to the other historical cases of the emergence of organisational novelty: the stock market in early-modern Amsterdam, the consolidation of Germany in 19th century, the divergent outcomes of similar economic reforms in the Soviet Union and China, and the emergence of the biotechnology industry in late 20th-century America. Underlying this generalisation of Florentine insights to new applications is Professor Padgett’s adaptation of the concept and models of ‘autocatalysis’ from the biological literature on the origins of life. 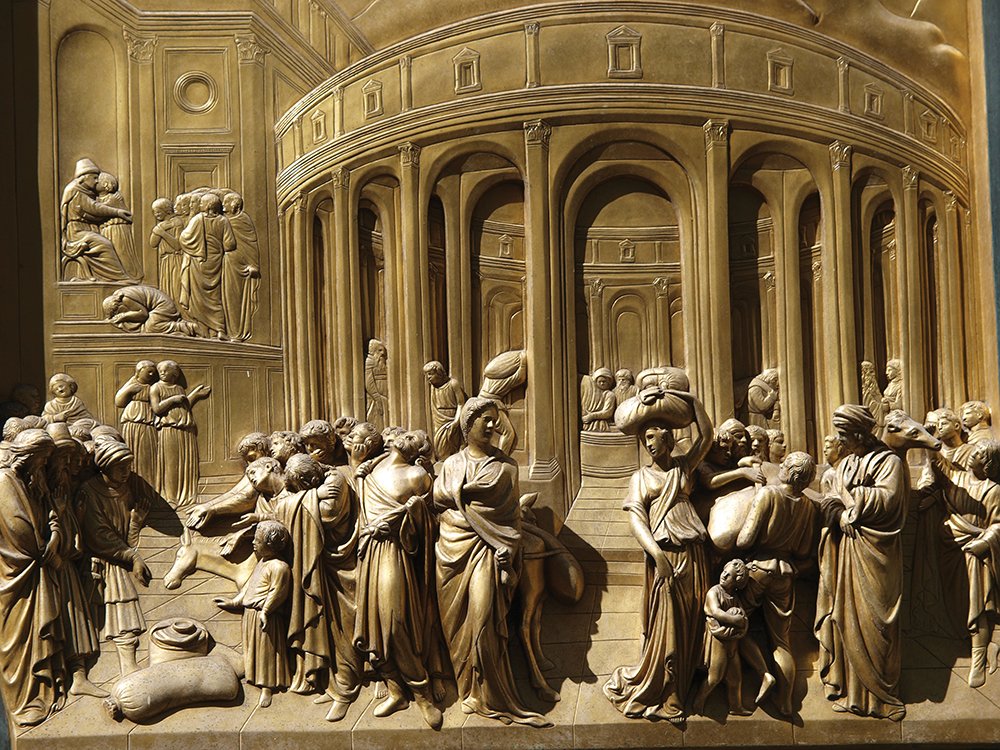 Kinship and marriage have long played a major role in determining social status in class-based societies. Medieval class structures based on feudal systems were rigid and categorical, with limited class mobility and marriage prospects relegated to within one’s designated group; elite families only married to other elite families. During the Renaissance, Florence saw the breakdown of this medieval social status and hierarchy among categorical groups into a continuous hierarchical status with potential for mobility.

Once again, Professor Padgett and his colleagues were able to use records to determine the social networks that made this transition possible. They found that during this time, social stratification could be determined by either wealth, political office, and age of family. However, rankings of a family within each of these three systems often did not align. Thus, a member of a family with great wealth but poor political standing could marry a member of a less wealthy family with an old name.

As families sought to make suitable matches across these three components, it opened the door for new men who were successful in politics or business to marry into old families, gaining upward social mobility. As a result, distinctions between elite families began to blur and become more fluid. Just as marital ties shaped Florentine economics and politics, developments in economics and politics made novel marriage pairings possible.

Currently Professor Padgett is in the process of extending his multiple-network and autocatalysis ideas about social innovation to language. He is studying William Faulkner and political debate in the Florentine Consulte e Pratiche to uncover how social networks shaped the linguistic landscape of the Renaissance. 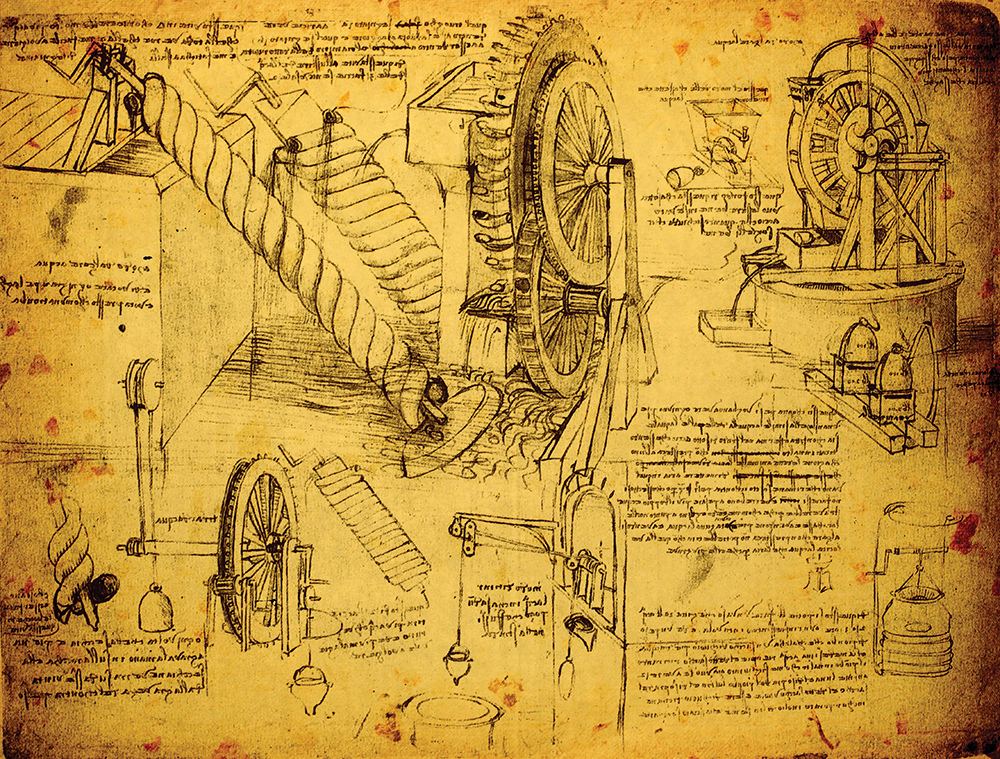 Nothing Occurs in a Vacuum

In all of these cases and others, social-organisational innovation came from a cross-network advances and the recombination of multiple networks. Every Renaissance innovation can be tied to activity in adjacent social networks. For example, radical economic change does not occur through the evolution of one network in isolation, but rather the evolution of that network in the surrounding ‘catalytic’ context of kinship and political networks. Advances in any one network fuelled new processes in others, creating an innovation feedback loop that ultimately shaped the course of European history.

One of Professor Padgett’s most intriguing findings is that innovative Florentines were usually conservative in their motivation; seldom were they setting out to create something novel, instead simply working to improve upon the familiar. Innovation occurred not so much by the intentional invention of new tools for old purposes, as by the opportunistic adaptation of old tools for new purposes. 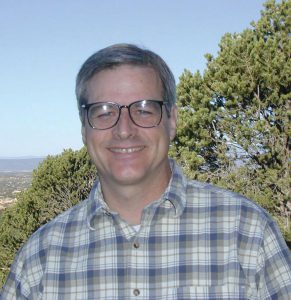 Professor John F. Padgett obtained his PhD in Sociology and Public Policy from the University of Michigan in 1978. After serving as an Assistant Professor at Harvard University, he joined the faculty of the University of Chicago in 1981, where he currently serves as a Professor of Political Science and Sociology. Since then, he has also served as a Research Professor at the Santa Fe Institute and held numerous prestigious Visiting Professor positions at universities across Italy. Over the past 25 years, he has been constructing a massive quantitative data set about social-network evolution between years 1300–1500 in Renaissance Florence using primary archival sources, with the goal of understanding how social networks enabled the innovation of this period.

J Padgett and PD McLean, Organizational Invention and Elite Transformation: The Birth of Partnership Systems in Renaissance Florence, In American Journal of Sociology, 2006, 111, 1463–1568.