Around the world, invasive species provide a major threat to global biodiversity. The Great Plains of the United States are among the most threatened ecosystems, where a noxious invasive weed is overpowering the native tallgrass prairies. Professor KC Olson and his team at Kansas State University are working to identify eco-friendly ways to naturalise the weed and preserve native prairie.

Invasive species – plants and animals that have been brought outside their native environments by human activity – are a major problem worldwide. Often invasive species have no natural predators or are unappealing to local herbivores, and thus are able to out-compete native species for resources.

In the Great Plains of the United States, the invasive plant Sericea lespedeza (Lespedeza cuneata; sericea) is growing out of control, choking native plants in the region’s characteristic tallgrass prairie, which is among the most endangered ecosystems on earth. Native to Asia, sericea is a perennial plant with aggressive growth and reproductive characteristics. It was originally introduced to Kansas in the 1930s for erosion control. Unfortunately, sericea is highly invasive in the central plains of the USA and it is resistant to many forms of weed control, such as common herbicide treatments and spring season prescribed fires.

Professor KC Olson of Kansas State University and his colleagues and graduate students have spent the past decade seeking to understand ways to eradicate the weed from Kansas’s grasslands, using novel grazing and burn strategies. 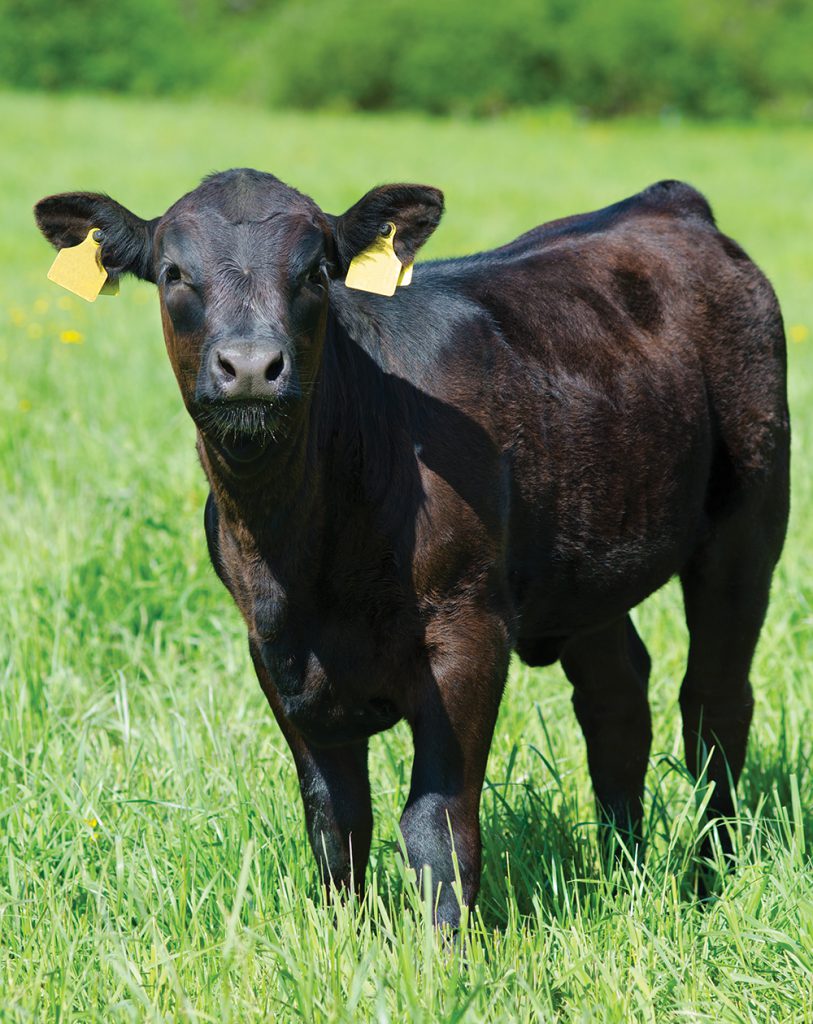 One of the key reasons that sericea is so hard to tame in the Kansas prairie is that the cattle that roam the grasslands simply don’t want to eat it. The plant contains high levels of tannins – strong-tasting chemicals that most cattle find unpalatable. When given the option to graze pastures where the plant is growing alongside grasses, cattle opt to eat the grasses, furthering the imbalance between sericea and other species. The high level of tannins also means that the plant is harder to digest than most standard forage, so cattle also receive less nutritional benefits from grazing on sericea. When herbivores are your main line of defence against an invading weed, it is critical that they be willing and able to eat it.

After demonstrating that cattle do, in fact, show a strong aversion to hay contaminated with sericea, Professor Olson’s team set out to find ways to make the plant more palatable. They discovered that a completely natural by-product of the corn milling industry called corn steep liquor (CSL) had potent tannin-binding properties. Subsequently, the group demonstrated that cows given CSL as a nutritional supplement showed an increased willingness to eat hay containing sericea and had an easier time digesting it. 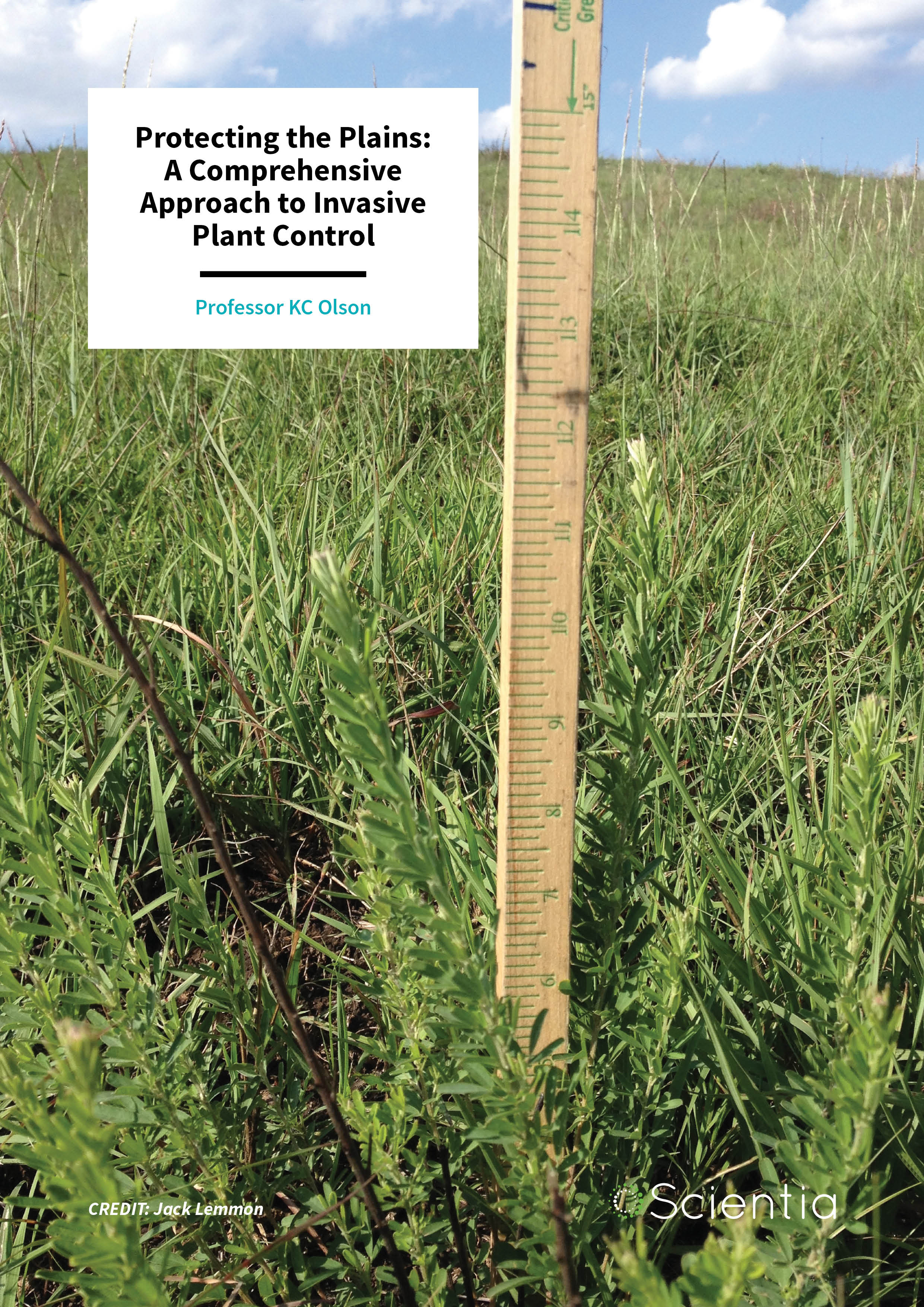 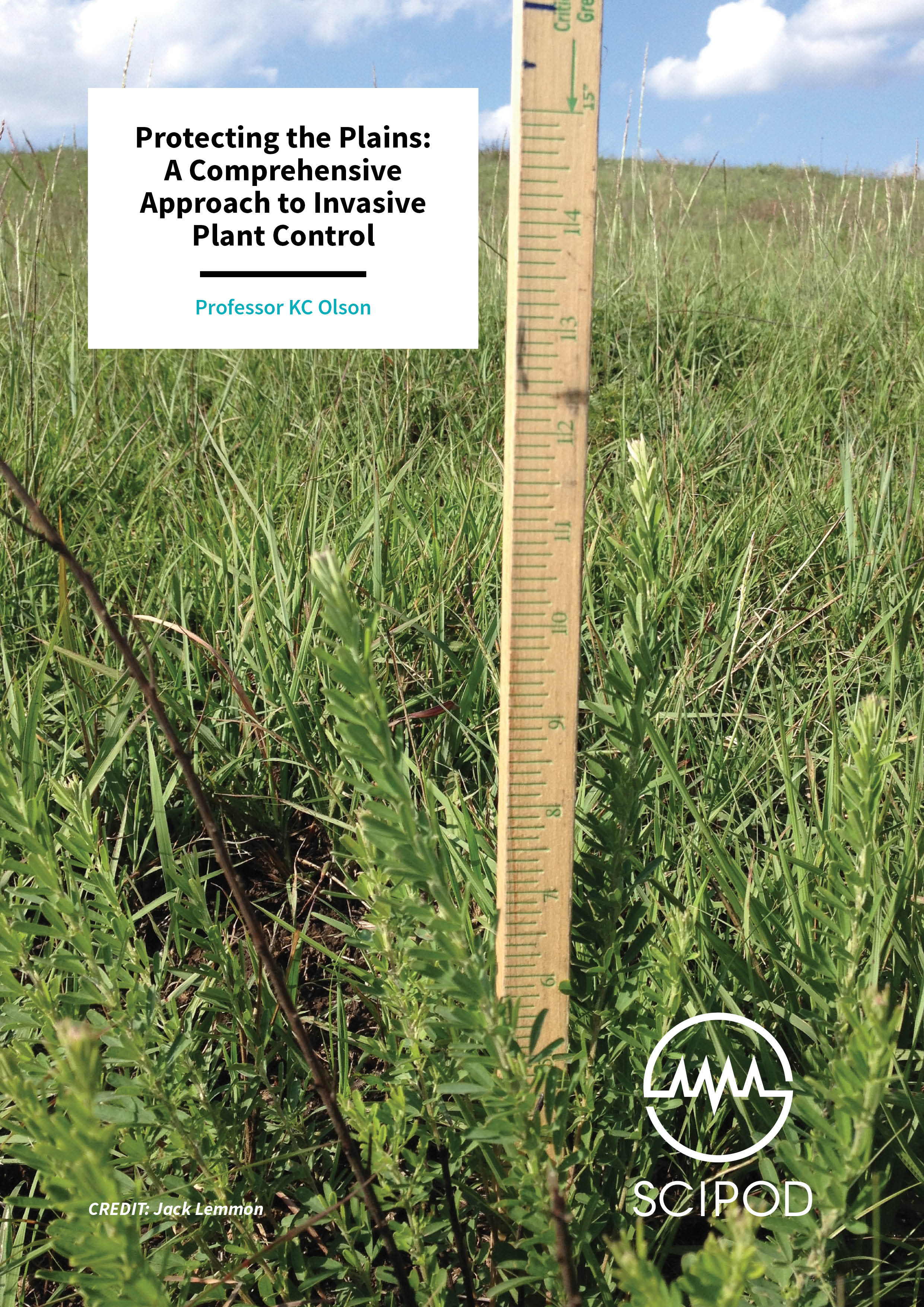 In a follow-up study, Professor Olson’s team noted that cattle also avoid sericea when grazing the live plant in pastures and that the live plant has even greater tannin content than it has when dried. Again, they found that supplementation with CSL made sericea more appetising to grazing cattle, and greatly improved their ability to digest it. Interestingly, their results indicate that CSL supplementation did not increase foraging rates on any other species of plants, suggesting that it is an effective and targeted strategy for controlling sericea expression in pastures, while still promoting cattle health. This presents a major win for ranchers, who can worry less about having to control the weed using herbicides.

Another potential strategy for controlling sericea in native pastures is using additional species of herbivore to graze alongside cattle. The increase in grazing pressure caused by the addition of a second species of herbivore, effectively an increase in stocking rate, requires careful consideration. It could be detrimental to the pasture if over-grazing results, leading to soil erosion during the winter and poor forage quality the following year. 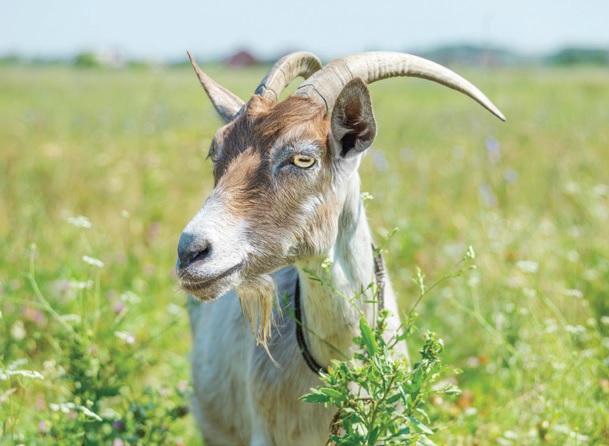 In a 2012 study, Professor Olson’s team evaluated the effectiveness of grazing cattle and goats together for controlling sericea infestation in native tallgrass pastures. In their experiments, the researchers compared fields grazed by cattle alone to fields grazed by both cattle and goats simultaneously. By the end of the grazing season, they found that in fields containing both species, the percentage of sericea plants that had been grazed was significantly higher than in pastures stocked with cows alone. In addition, this co-grazing approach did not negatively affect the growth of the beef cattle, or the amount of residual forage left to protect the soil and provide food for the following year.

In another study, the team tested a rotating livestock strategy over a period of four years by comparing pastures only grazed by cattle to pastures grazed by cattle in early summer and sheep in late summer. While the weed continued to spread in the cattle only pastures, in the pastures that had hosted both types of livestock, sericea was less abundant at the end of the grazing season. Simultaneously, Professor Olson and his students studied the droppings of free-grazing cattle and sheep to determine their foraging preferences. They found that while the cattle strongly avoided sericea, sheep did not avoid eating the plant. Overall, Professor Olson’s team found that the pastures grazed by sheep had significantly less sericea present over the long term, while still maintaining enough plant mass to prevent erosion over winter and provide lush pastures for the cattle to return to in the spring.

An approach to grassland management for plant species composition that is growing in popularity is prescribed fire. These controlled burns are often used to help prevent the accidental fires that can turn into wildfires, by clearing out the dormant and highly combustible plant materials that are most likely to burn out of control. Prescribed burns can benefit native species by creating opportunities for dormant seeds to germinate and new growth to occur.

The Great Plains prairies are fire-adapted, meaning that many of the native plant species respond positively to frequent fire, and may even reproduce more readily following a fire. Unfortunately, the early springtime prescribed fires that are common in Kansas appear to benefit sericea as well. Early burns are usually performed with the idea that late season burns may not leave enough vegetation to prevent soil erosion over the winter, but sericea is a late-blooming weed and is less active in the spring.

Professor Olson and his team wanted to determine if alternative burn schedules would help with the pesky plant without damaging the long-term health of the grasslands. Over a four-year period, they tracked the growth of sericea in plots that received springtime, early summer, and late summer prescribed burns.

They found that the later the burn was applied, the better the reduction in sericea, with positive impacts on many native species, including legumes and wildflowers. Later prescribed fires were also slower-moving, and thus, easier to control than traditional spring-season fires. Further, late season burns left enough ground cover so that soil was protected during the winter. The team’s results demonstrate how late season prescribed burns can offer an inexpensive and effective means of controlling sericea populations, while preserving and promoting native plant species in the Great Plains.

Spray the Weeds Away

Another tactic for removing undesired plant species is applying targeted herbicides to pastures. Spraying herbicide for sericea is commonly done late in the fall, to reduce the risk of killing native species while hitting the weed when it is still active. Professor Olson’s team sought to determine if using herbicides was as effective as late season prescribed burns or enhanced the results of a burn, and if either impacted native plant species.

They found that while herbicides, burns, and the two together significantly reduced sericea populations, there was little difference between the three treatments in overall effectiveness. However, native plants that had growth cycles similar to sericea were also negatively impacted by treatments leveraging herbicides. Given that prescribed burns alone provided similar sericea reduction without damaging native plant populations, the team’s work reveals that applying simple late season burns is the most eco-friendly option for attacking the weed. 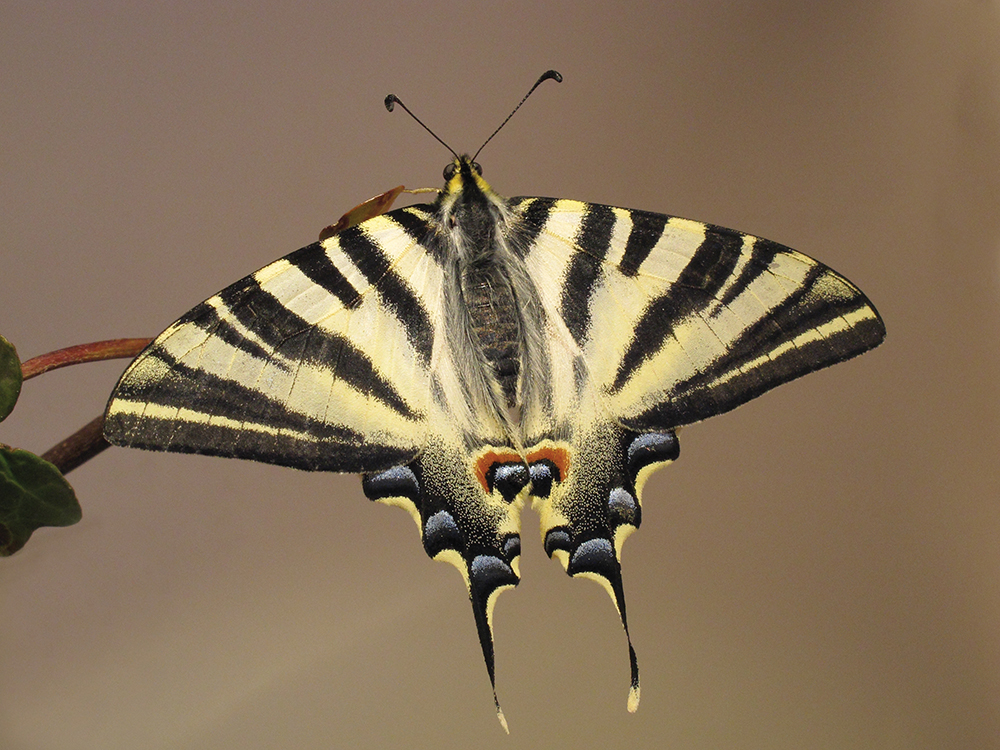 A critical component of the team’s work is to ensure that sericea is reduced while native plants and animals are either unaffected or stimulated. Grassland songbirds avoid nesting in areas where sericea grows heavily because the aggressive plant chokes out many of the native flowers that grassland butterflies, a food source for songbirds, rely on for nectar. This demonstrates that the invasive weed has broad-reaching impacts on grassland ecosystems. However, sericea treatments also have the potential to impact native plants and wildlife negatively, and both the risks and benefits must be considered.

Professor Olson’s team performed a study in which the abundances of grassland songbirds and butterflies were measured at sites where both burn timing and multi-species grazing were compared. Neither treatment negatively affected the biodiversity of these groups. In fact, late summer prescribed burns appear to actually benefit certain grassland birds.

These results indicate that both correctly-timed prescribed burns and targeted grazing can be effectively utilised to reduce sericea invasion, while still maintaining the health of native wildlife populations.

A Better Future for the Great Plains

Controlling invasive species and protecting native plants and wildlife is critical for preserving the world’s biodiversity. In the Great Plains, tallgrass prairie is threatened by rapidly spreading sericea, which has not responded to treatment with traditional methods. 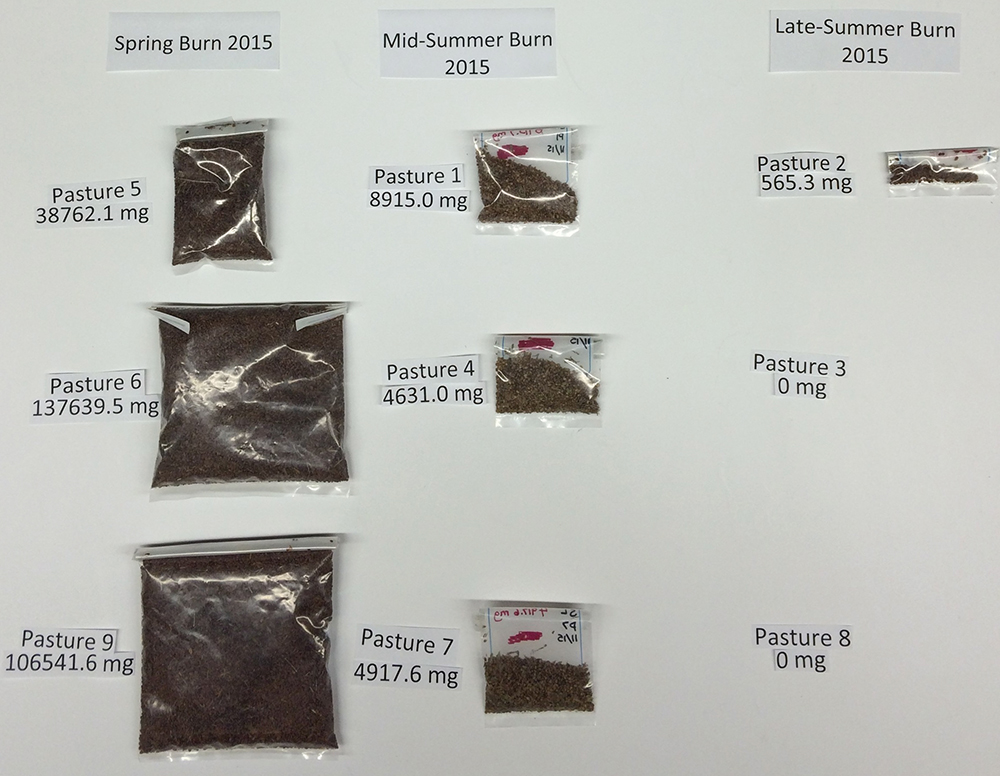 Seeds harvested from 100 sericea lespedeza plants after the team’s April, August, and September prescribed burning regimes in 2015. Clearly, seed-based reproduction is strongly suppressed when fire is applied near the end of the growing season

Professor Olson, his colleagues, and his team of students have identified a comprehensive suite of approaches to manage sericea that can be implemented to naturalise the weed while promoting native species. By using nutritional supplements that encourage cattle to eat sericea, adding less tannin-sensitive herbivores to infested fields, and applying late summer burns to harm the weed at its peak, ranchers and land managers can control sericea while promoting the health of their herds and the native prairie grasslands. 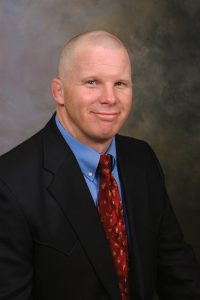 Professor Olson obtained his PhD in Animal Sciences and Industry at Kansas State University in 1998. Since then, he has swiftly ascended to acclaimed academic positions, including an Associate Professorship at the University of Missouri, and his current Professorship at Kansas State University. Here, Professor Olson also holds the title of W.M. and F.A. Lewis Distinguished Chair. To date, Professor Olson has been presented with ten academic and professional development awards, and has been an editor as well as a reviewer for a number of respected journals. Professor Olson has also presented at a broad range of local and international conferences as an invited speaker. With an outstanding list of successful grant funding awards and several papers already published this year, Professor Olson has contributed significantly to his field in providing expert knowledge in range beef cattle nutrition and management.

Contribution no. 19-045-T from the Kansas Agricultural Experiment Station