Quantum Chromodynamics is arguably the crowning achievement of modern particle physics – explaining the very existence of a vast majority of stable, observable matter in the universe. All the same, the theory is far from complete. Professor Klaus Peters, Professor Miriam Fritsch and Professor Wolfgang Gradl at three universities in Germany have dedicated their research to this intriguing field. Stemming from the very first confirmed observation of a ‘tetraquark’ in 2013, their research is opening up the door to a new generation of particle physics experiments.

On the surface, the Standard Model of particle physics appears to give an elegant summary of the universe’s most fundamental particles and forces, explaining how they fit together to form larger, more complex structures. Protons, for example, are made up of three elementary particles named quarks, which are held together by the strong nuclear force. The strong nuclear force is itself mediated by massless particles called gluons.

In reality, however, the picture isn’t this simple. A wide variety of more complex processes are also at play, which mean that the actual mass of a proton is far heavier than the combined masses of its quarks.

‘It is sometimes said that the whole is more than the sum of its parts,’ says Professor Klaus Peters of Goethe University Frankfurt. ‘For the proton, this expression is literally true. The sum of the masses of its constituent quarks account for less than 2% of the proton’s total mass, with the rest resulting from the kinetic and binding energies among quarks due to dynamics of the strong nuclear force.’ Over the past several decades, particle physicists have put immense effort into finding out more about these mysterious properties.

Successes and Failures of Quantum Chromodynamics

So far, these efforts have culminated in a highly advanced theory named Quantum Chromodynamics (QCD). As a key part of the Standard Model, QCD directly predicts the existence of hadrons – subatomic particles made up of quarks, which include baryons and mesons. Baryons, such as protons and neutrons, are made up of three quarks, while mesons are short-lived particles comprising a quark and an anti-quark. ‘QCD describes the properties of quarks and their interactions through gluons,’ explains Professor Miriam Fritsch of Ruhr University Bochum, a long-term collaborator of Klaus Peters. ‘It is very successful in predicting processes at high energies where quarks are weakly coupled together.’ 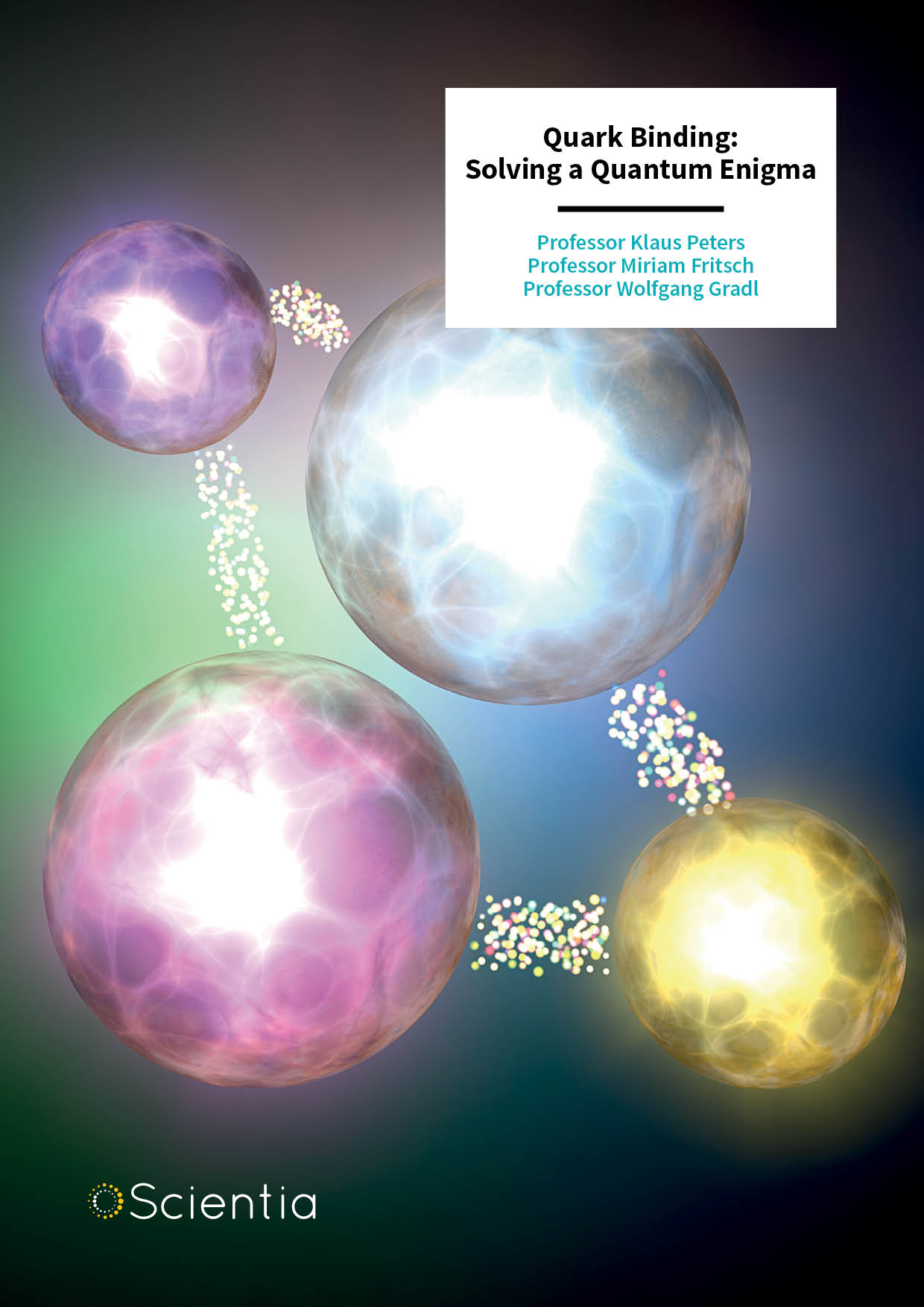 Baryons and mesons may be relatively easy for physicists to study, but according to QCD, they aren’t the only particles that can be made up of quarks. In fact, the theory predicts a diverse family of quark-based particles – many of which contain lower-energy quarks, whose properties are strongly connected with each other. However, these cases are much more difficult for QCD to deal with. ‘At low energies, quarks become far more strongly coupled together, making it hard to predict the properties of bound systems from first principles,’ says Professor Wolfgang Gradl of Johannes Gutenberg University Mainz, who works closely with Miriam Fritsch and Klaus Peters. ‘Furthermore, complex systems of quarks and gluons are strongly coupled many-body problems.’ 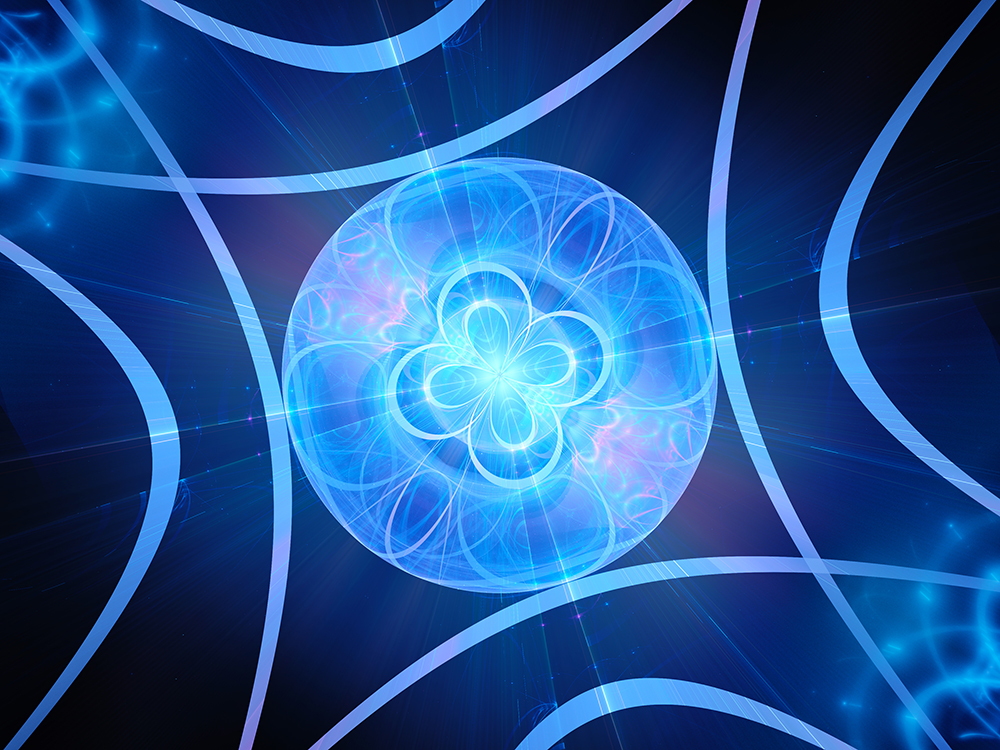 For physicists, quantum many-body systems are notorious for being one of the most difficult scenarios to work with. Low-energy QCD is such a case where multiple quantum particles, whose behaviours are dependent on each other, need to be dealt with at the same time, making the composite system highly complex. This raises questions about the properties of these ‘exotic’ particles, composed of more than three quarks.

Klaus Peters gives us an idea of the scope and complexity of these questions: ‘What are the degrees of freedom which describe resonances and bound states? Are there and where are the resonances and bound states of exotic particles, as predicted by QCD? How do bound quark systems interact? What do the structures of the systems look like?’ The internal degrees of freedom of resonances, bound states and their observables that Klaus Peters describes are quantities that describe the overall properties of multiple-quark systems.

But without any way to measure these values through experiments, particle physics essentially ran into a dead end. ‘Unfortunately, we are still unable to calculate these properties from first principles in QCD, and so, the existence of so-called exotics remained unclear,’ says Wolfgang Gradl. Solving these issues may be a daunting task, but in their research, Professors Peters, Fritsch and Gradl are now facing the challenge head-on. In 2013, they were involved in a ground-breaking discovery made during a particle physics experiment in China. This discovery promised to make their task far easier. 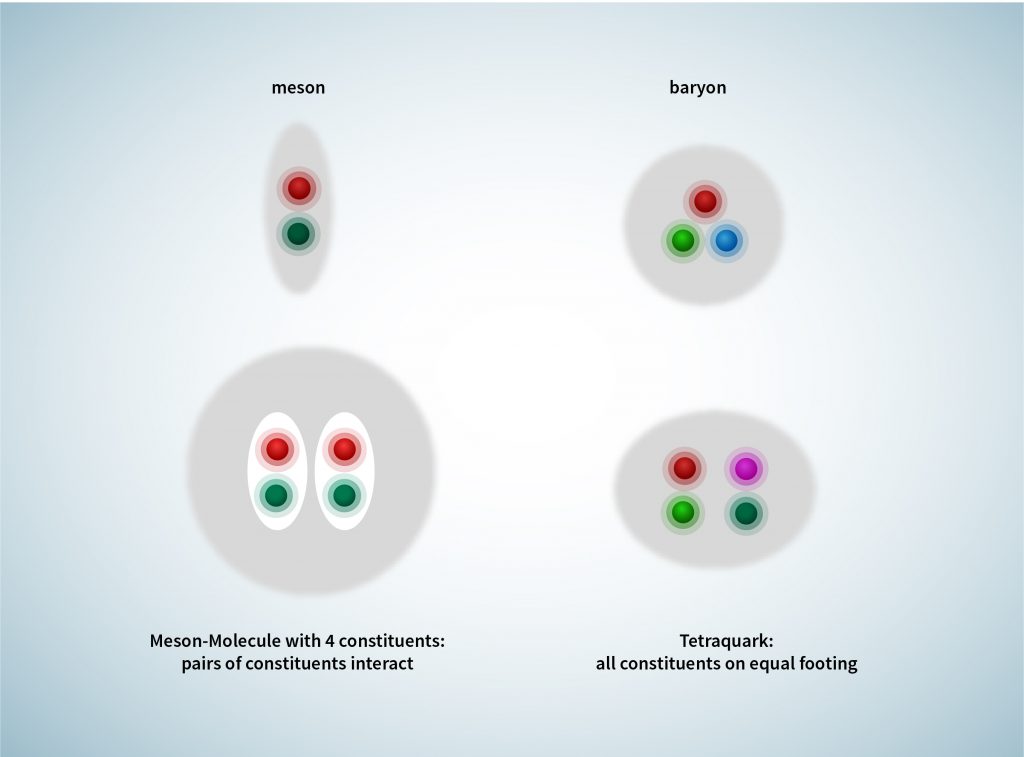 The Beijing Spectrometer III (BESIII) at the Beijing Electron-Positron Collider began operation in 2009. One of the aims of the experiment was to find out more about a particle called Y(4260), which was first discovered in 2005 by the BaBar Experiment located at the Stanford Linear Accelerator Center (SLAC) in Palo Alto, California. Y(4260) is highly mysterious, as it does not seem to be a conventional meson. In fact, this elusive particle was one of the first hadrons discovered that appears to have additional contributions – either extra quarks or excitations in the gluon field.

The BESIII Collaboration, which includes Professors Peters, Fritsch and Gradl, decided to dedicate a large amount of time to studying the properties of Y(4260) and similar particles. They have been collecting several data sets that allow them to learn more about these particles.

Within the BESIII detector, a beam of electrons collides with a beam of positrons, the anti-particle of the electron. The energy released in this matter-antimatter annihilation is then used to create other particles. For example, in the investigation of Y(4260), the energy of the electron-positron system is finely tuned in order to create the conditions in which this particle can pop into existence. Almost as soon as the Y(4260) particle is created, it subsequently decays into several products, which are picked up by the detector system surrounding the original collision spot of the electron and positron beams. By analysing these decay products, the physicists can learn more about the structure of Y(4260).

However, while unravelling the mysteries of Y(4260), the BESIII Collaboration found something even more surprising. By analysing the decay products of the electrically-neutral Y(4260) particle, they identified another electrically-charged particle, which they named Zc(3900). Under normal circumstances, Zc(3900) would appear to be a conventional meson. The decay products suggested that it contains a heavy type of quark called a ‘charm’ quark, along with its anti-matter counterpart, an ‘anti-charm’ quark.

However, a charm quark together with an anti-charm quark results in a neutral particle. In order to make a particle with electrical charge, at least two additional quarks are needed. That left only one option: Zc(3900) must be an elusive four-quark particle – an ‘exotic hadron’ made up of two quarks and two anti-quarks.

QCD and the quark model had already predicted these particles 60 years ago. Since 2005, a handful of candidates for four-quark particles had been observed, but each one had only been detected in a single experiment. Soon after the discovery of Zc(3900) by the BESIII experiment in 2013, it was subsequently confirmed by the Belle Collaboration in Tsukuba, Japan, and again by data from another experiment at Cornell University. This marked the first time that more than one experiment claimed to observe the same four-quark particle.

The discovery of the BESIII Collaboration was a triumph for particle physics – confirming long-standing theoretical predictions. ‘The doubtless discovery of Zc(3900) in 2013, which cannot be explained as a conventional state in the quark model, was an important step,’ says Wolfgang Gradl. ‘Thus, the detection of the Zc(3900) with a minimum of four constituent quarks/anti-quarks was one of the greatest discoveries in this decade.’ Beyond the observation of Zc(3900) itself, further studies into its properties will prove to be vital for physicists to understand strongly-coupled QCD.

As Klaus Peters explains, such studies open up a rich new area of particle physics, since four-quark particles, and potentially even more exotic particles, could be composed of vast combinations of quarks and gluons. ‘QCD principles allow for even more complex objects,’ he says. ‘Because of their large variety of possibilities, they should outnumber all the conventional particles such as baryons and mesons.’ However, despite these intriguing possibilities, there is still a long way to go before such studies can take place. Before then, physicists need to learn more about the fundamental properties of exotic particles. 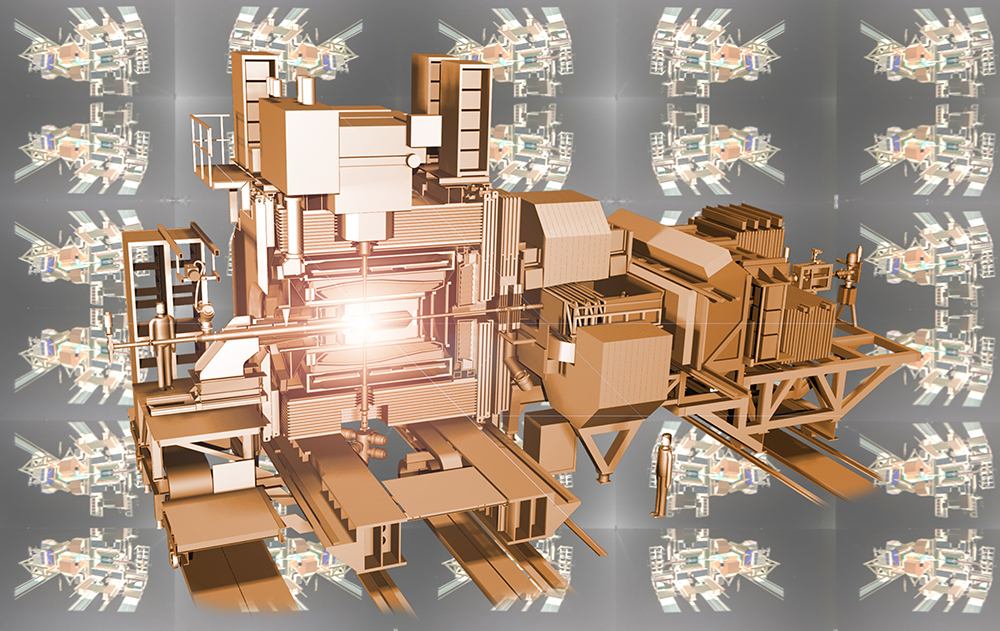 At the heart of the issue is the very fact that exotic particles are so elusive. Klaus Peters says that physicists have yet to answer why they have escaped observation for so long: ‘The question is: if exotic bound states are there, then why don’t we see them? None of them are stable and many particles are very close together and overlapping. Therefore, they cannot be distinguished easily.’ Professors Fritsch, Gradl and Peters believe that answers to the questions posed by multi-quark particles could also help to answer a much more fundamental question: unravelling the mysteries of the universe’s most stable particle, the proton. ‘All these points back to a simple question: how does the binding among the quarks within the proton work, and how does it generate its mass?’ adds Miriam Fritsch.

As the capabilities of particle physics experiments ramp up in the coming decades, these questions will form the basis of a new era of experiments in the field. ‘The proof of the existence of exotic hadrons is made and the door is opened to a new territory, but a lot of open questions remain,’ says Miriam Fritsch. ‘Now, it is up to a new generation of experiments to unravel the puzzle.’

A key part of this new generation of research will soon take place in Professors Peters, Fritsch and Gradl’s home nation of Germany. ‘The PANDA Detector is under construction at Darmstadt’s Facility for Antiproton and Ion Research (FAIR), utilising an antiproton-beam for a large variety of high-statistics and high-precision measurements in hadron physics. It will begin operation in 2025,’ Klaus Peters concludes.

With the help of this highly sophisticated detector system, the particle physics community could soon ascertain the internal structure of Zc(3900) in unprecedented detail. This could bring them one step closer towards unravelling the mysteries of the strongly-coupled matter described by QCD, and perhaps, understanding the true nature of the Standard Model. 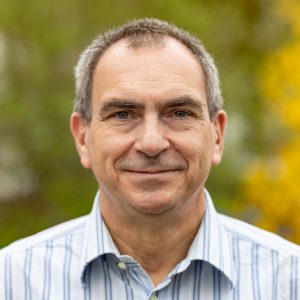 Professor Klaus Peters completed his doctoral degree in Physics at the Johannes Gutenberg University Mainz in 1991. He then worked at Bochum as a lecturer and was a visiting researcher at CERN in Geneva and SLAC in Stanford. In 2004, he became Professor at the Goethe University Frankfurt with a joint appointment at GSI Helmholtz Centre for Heavy Ion Research GmbH in Darmstadt. Among other activities, Professor Peters is member of the GlueX, BESIII, and the PANDA collaborations, and has been the spokesperson of the PANDA collaboration since 2017. His principal research interests are exotic hadron spectroscopy with light, strange and heavy quarks. 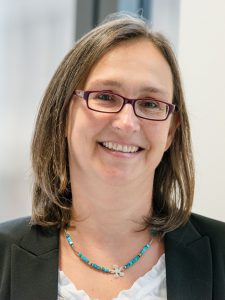 Professor Miriam Fritsch completed her doctoral degree in Physics at the Friedrich Alexander University Erlangen in 2002. She then worked at the Universities of Bochum, Karlsruhe and Mainz, and was a visiting scientist at SLAC in Stanford, before becoming Helmholtz Young Investigator Group leader in Mainz (2011–2016). In 2016, she became Professor at the Ruhr University Bochum. Among other activities, she is a member of the BaBar, BESIII and PANDA collaborations. Professor Fritsch’s principal research interests are hadron spectroscopy, especially with heavy quarks, and the development of detector systems with silicon pixel sensors used in this field. 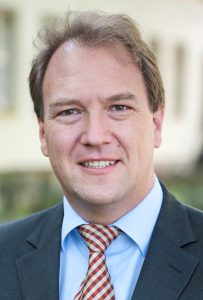 Professor Wolfgang Gradl completed his doctoral degree in Physics at the University of Heidelberg in 2001. He then worked at the Universities of Heidelberg and Edinburgh and was a visiting researcher at SLAC in Stanford, before moving to the Johannes Gutenberg University Mainz in 2008. Here, he has been working as a Professor since 2011. Among other activities, Professor Gradl was member of the Hera-B and BaBar collaborations and he has been the co-spokesperson of the BESIII collaboration in Beijing, China, since 2013. His main research interests lie in hadron spectroscopy and Standard Model tests using particles containing charm and bottom quarks.