Grasslands are global biodiversity hotspots, but are severely threatened by agricultural expansion. In particular, invasive grass species can wreak havoc on wild grassland ecosystems. Professor Lan Xu of the Department of Natural Resource Management at South Dakota State University, along with her national and international collaborators, is investigating the ecological ‘tug-of-war’ between invasive and native grass species in the Northern Great Plains, and the implications for prairie land management and agriculture.

The Northern Great Plains (NGP) is a vast expanse of prairie grassland that spans five US states – north-central Nebraska, much of North Dakota and South Dakota, north-eastern Wyoming, eastern Montana – and two Canadian provinces. The NGP’s wild prairies are an important habitat for a wide variety of wildlife. However, these have been fragmented by anthropological pressures, both historic and contemporary. Magnificent herds of bison and pronghorns were displaced by domestic cattle, and the once endless sea of wild grasses was replaced with golden wheat fields, necessary to feed the influx of settlers in the 19th century. The rapid expansion of intensive arable and livestock farming led to widespread soil erosion, resulting in poorer agricultural productivities and lower biodiversity. Native flora and fauna are necessary for maintaining healthy soils, and with their loss, soil erosion became a vicious cycle, culminating in the infamous Dust Bowl of the 1930s.

For the early settlers, the grasses native to the ‘New World’ were woefully inadequate for the demands of large-scale livestock grazing. Thus, they planted hardy grasses from the ‘Old World’, such as Kentucky bluegrass (Poa pratensis) and smooth brome (Bromus inermis). These grasses from Europe, Asia and Africa provided ideal livestock feed, being fast-growing, perennial and less susceptible to soil erosion than the native grasses. However, their introduction proved to be devastating to the prairie ecosystem. These ‘alien’ grasses soon became invasive by outcompeting native grasses. Prairies that once hosted diverse wild grass species were displaced by dense monocultures of smooth brome and Kentucky bluegrass. This was often accompanied with precipitous drops in the biodiversity of animals that depend on native grasses. 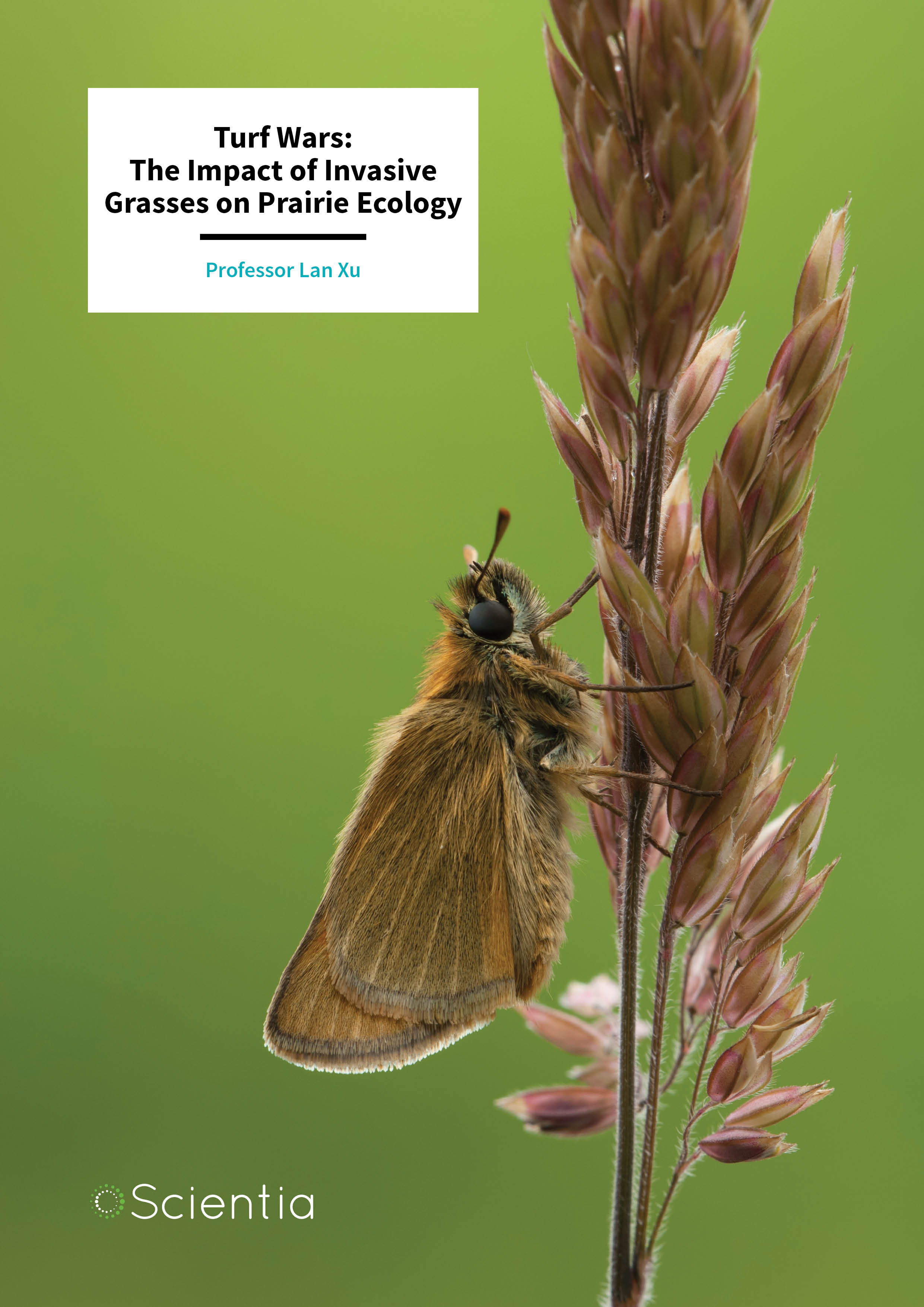 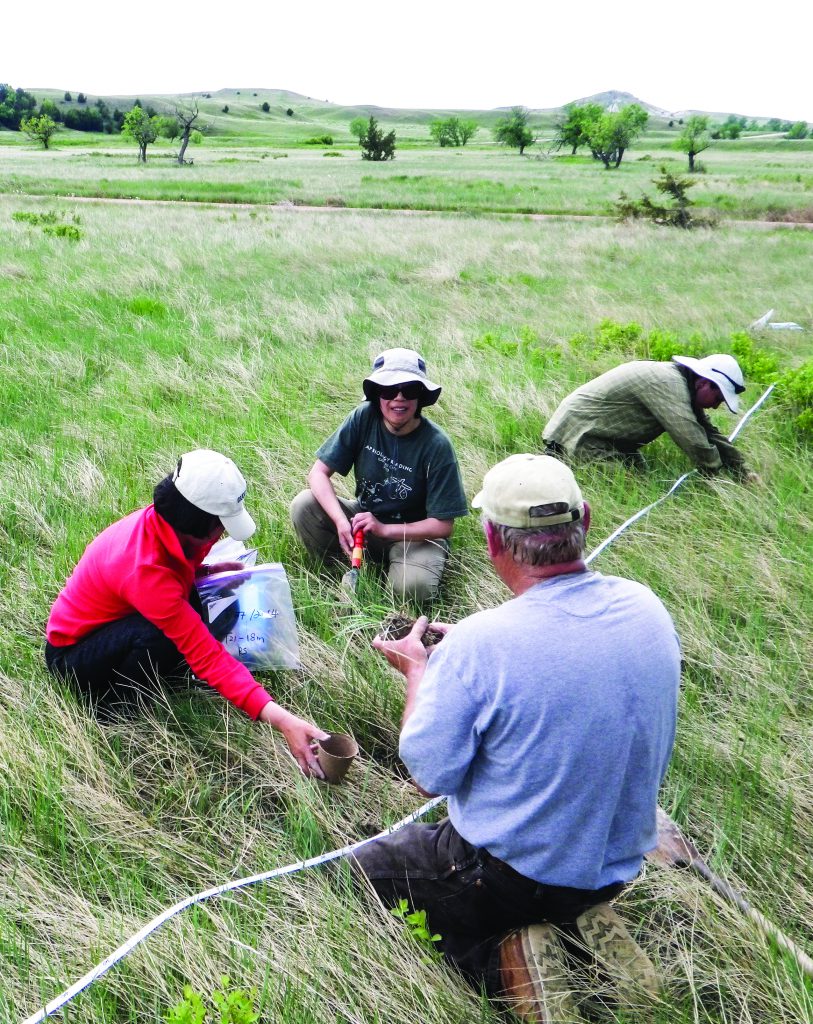 The decline of NPG native grasses – and the wildlife that depends on them – is as much of an issue now as it was in the 19th century. The NGP are now among North America’s most threatened ecosystems – at risk of vanishing completely! It is thought that less than 1% of native tall-grass prairies remain and 70–90% of mixed-grass prairies have been lost. Previous attempts to restore the native grasslands have involved eliminating invasive grasses through control methods such as grazing, fire and herbicides. However, these methods do not guarantee recovery by native species and very often, non-native grasses simply return with a vengeance. Such interventions have often been doomed to failure, as the mechanisms and processes underlying grass invasion and persistence in response to control methods are not fully understood.Therefore, Professor Lan Xu and her colleagues at South Dakota State University teamed up with scientists at the US Forest Service to gain a deeper understanding of grass plant community dynamics and demographics. Such knowledge is greatly needed for developing long-term effective invasive grass management strategies.

Grassland degradation is a global issue that plays out in grassland ecosystems across the world. Therefore, its investigation, prevention and reversal often require international collaboration. Since 2012, scientists and PhD students from the China Agricultural University have joined the team. This collaborative research programme, focussing mainly on the prairies in the heart of the NGP, has been highly fruitful and synergistic.

Many plants – grasses included – reproduce sexually or asexually. Although sexual reproduction enables ‘survival of the fittest’ through genetic diversity, it must depend on the well-orchestrated processes of flowering, pollination and seed production. In contrast, asexual or vegetative reproduction can be quicker and produce more offspring, though these are genetically identical ‘clones’. These modes of reproduction are represented by the ‘seed bank’ and the ‘bud bank’. In fact, the bud bank is the modus operandi behind invasive grass species’ extreme resilience and persistence, and Professor Xu and colleagues are investigating its role in their colonisation of grassland ecosystems.

Plant sexual reproduction leads to seed production, which facilitates geographic dispersal and colonisation of new habitats. However, grass seeds rarely persist for more than five years in the soil and are often disturbed by grazing. For vegetative reproduction in grasses, the units of reproduction are buds – tissues that separate from the parent plant and form new individuals. Seed and bud banks, inside the soil, allow grass populations to survive environmental disturbances, such as grazing, tilling and fire. Perennial grasses overwhelmingly favour asexual reproduction through bud banks, which can account for the formation of over 99% of grass stems in some prairie ecosystems. 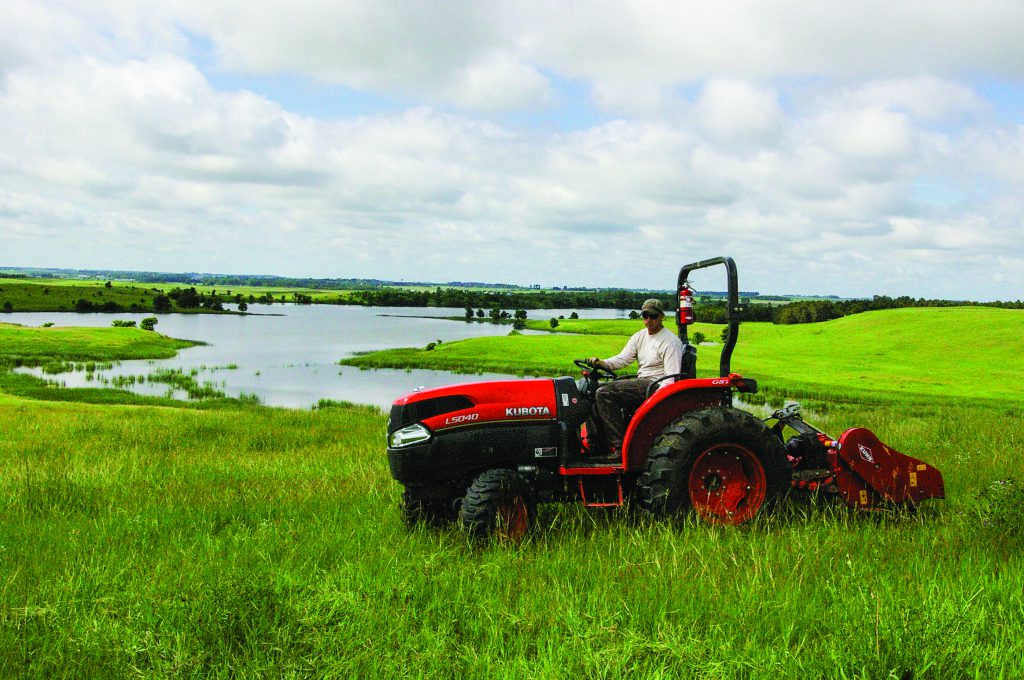 In grasses, ‘rhizomes’ are structures within the soil that act as food stores for surviving underground and sources of new buds. These buds develop into tillers (stems) that sprout and form leaves. This ‘tiller recruitment’ from the underground bud bank is the means by which invasive grasses spread and penetrate adjacent prairie communities and persist. Although elimination of above-ground stems through conventional control methods may seem effective, as long as the bud bank remains intact, invasive grasses will often return.

The competition for natural resources – space, soil nutrients, water, light and pollinators – plays out underground between the bud banks of invasive versus native grasses. This ecological tug-of-war happens unseen, beneath our feet, in grasslands across the world. Although hidden, it has very real, devastating impacts not only on grassland biodiversity, but also on agricultural productivity. Wild grasslands are important for global nutrient cycling, and are habitats for pollinating insects and pest-eating predatory birds that are also deployed in agriculture.

The impact of climate change on invasive grasses has been a lively field of research. Temperature, carbon dioxide levels, and inter-annual variability in precipitation are predicted to increase in the NGP. So, how will these environmental changes, combined with livestock grazing, affect the ecological tug-of-war?

To answer this, Professor Xu’s group carried out controlled growth chamber experiments. They exposed native western wheatgrass (Pascopyrum smithii) and invasive smooth brome to clipping effects (to simulate grazing), and different temperatures and watering frequencies, to simulate various climate change scenarios. The team found that smooth brome had greater tiller reproduction than wheatgrass at all temperatures, precipitation frequencies and simulated grazing. They also discovered that tiller reproduction was largely independent of moisture conditions for either species, though wheatgrass had greater rhizome production under moderate precipitation intervals.

Simulated grazing (clipping) was more detrimental to the native wheatgrass, which suffered from greater bud death and reduced bud development. These findings are highly insightful – suggesting that invasive brome will still have a competitive edge over native wheatgrass even under projected harsher climatic conditions, but climate change will not shift the tug-of-war! Professor Xu and her colleagues plan to further investigate the impacts of competition on bud bank dynamics under various climate scenarios. 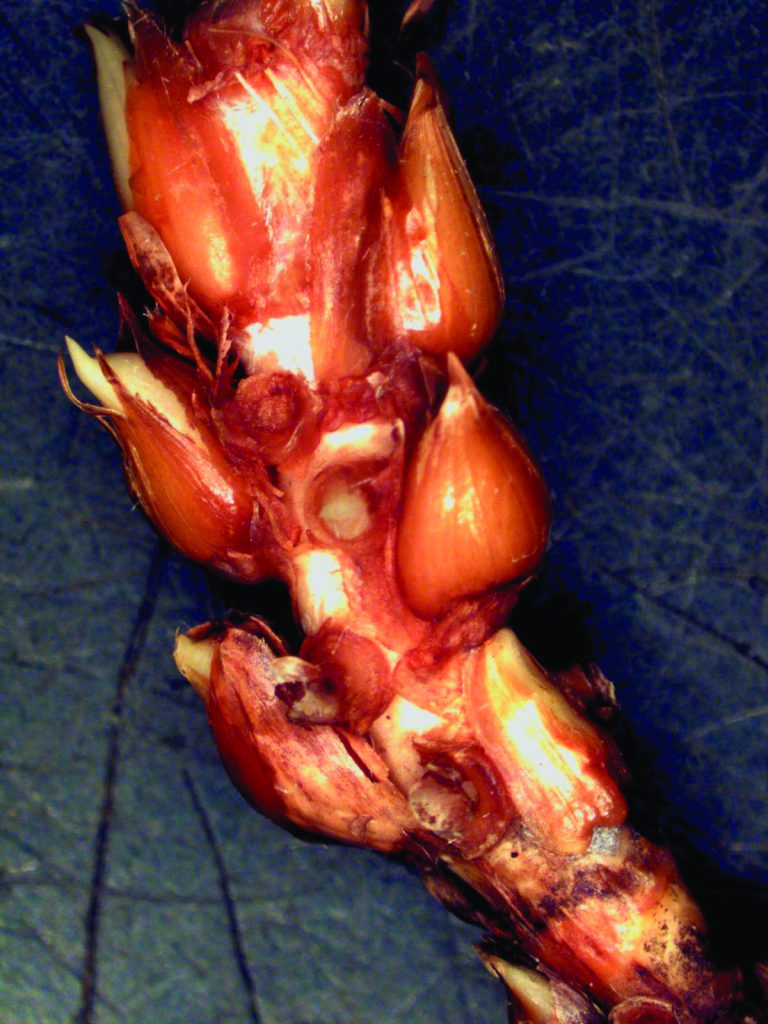 South Dakota’s Prairie Coteau plateau is the largest remaining tract of native northern tallgrass prairie in the United States and is a hotbed of biodiversity. However, it is a highly threatened ecosystem due to the expansion of arable agriculture and invasive grasses. In recent years, high grain prices have incentivised the conversion of large tracts of Coteau grassland into cropland.

Professor Xu’s group has worked closely with the South Dakota Wildlife Action Plan (SDWAP) – a conservation initiative that aims to preserve the state’s remaining habitats and curb loss of species – especially those of ‘greatest conservation need’. These threatened and endangered species include some wetland fishes and several butterflies – including the Dakota skipper (Hesperia dacotae), a species that Professor Xu’s group is investigating as an indicator of a prairie habitat’s ecological health.

The Coteau’s decline in native butterfly populations is a high-priority conservation concern for the SDWAP. In the last decade, the population of the Poweshiek skipperling (Oarisma poweshiek) – a once common butterfly – has experienced population collapse. The threatened Dakota skipper has also experienced a precipitous decline, but is faring slightly better. It is hoped that the Poweshiek skipperling’s sad demise is a fate that does not befall the Dakota skipper or other SDWAP-prioritised butterfly species. As well as habitat fragmentation, it is thought that suboptimal prairie management schemes may contribute to the decline in insect biodiversity. Controlled fires are often used for prairie management and recovery, but in the wrong season, fire can kill butterfly larvae.

Identifying high quality prairie habitats is instrumental to implementing appropriate prairie management schemes and incentivising conservation on public, tribal and private lands. Professor Xu’s team have deployed NASA-acquired Landsat satellite aerial imagery to map and delineate 225 square miles of South Dakota’s Coteau prairie habitats. They then assessed the ecological condition of the mapped land and quantitatively characterised native vegetation, and compared this to sites inhabited by Dakota skipper butterflies. This enabled them to identify sites within the study area where Dakota skippers are likely to thrive – using space age technology as a ‘down-to-earth’ approach to prairie conservation! 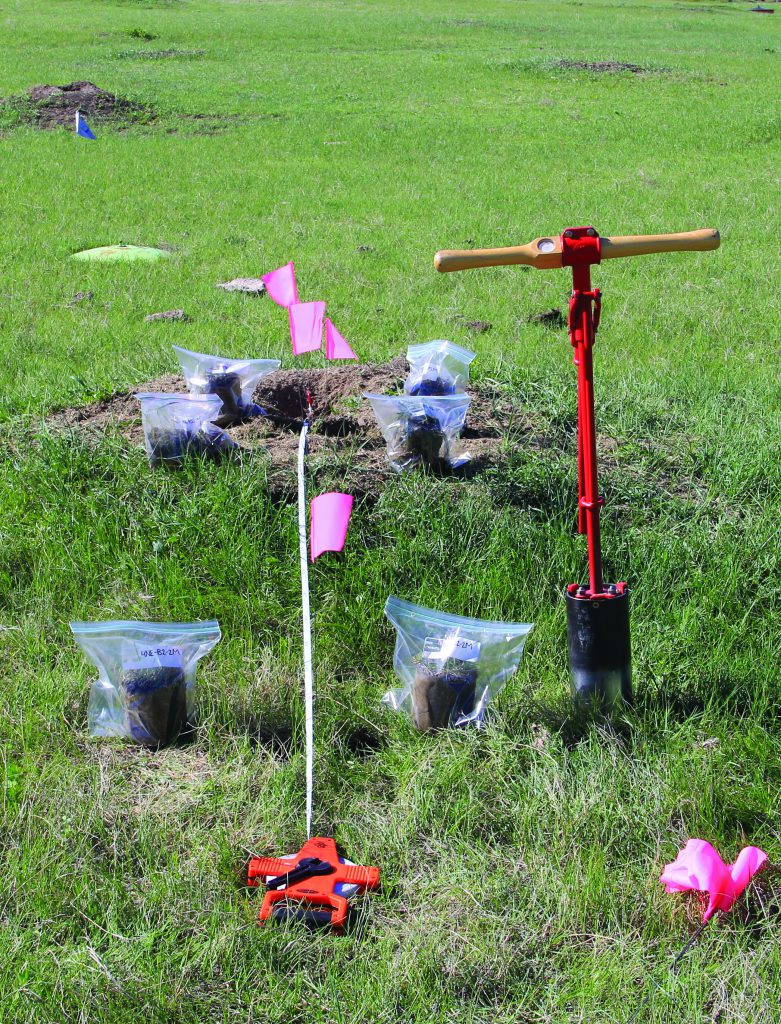 The NGP’s prairie ecosystems are under threat from invasive grasses and agricultural expansion. There are no easy fixes – after all, we need crops to eat, but we also have a duty to help conserve this important ecosystem. Unfortunately, interventions for native grass recovery or prairie management often fail or cause further damage. Therefore, in-depth knowledge of the ecology of grasses and the organisms that inhabit these habitats is needed.

To plug this knowledge gap, Professor Xu and her colleagues are investigating the ‘bud bank’ – the secret weapon of invasive grasses that gives them an edge over native grasses. The research group hopes to use their findings to develop effective grass management strategies that will result in successful native grass recolonization across the globe. 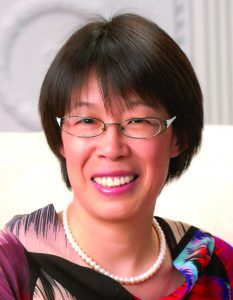 Professor Lan Xu is a professor at the Department of Natural Resource Management at South Dakota State University (SDSU). Her research interests include spatial distribution of vegetation in relation to environmental gradient factors, vegetation succession in semi-arid and arid regions, plant-animal interactions, and especially the ecology of the ‘bud bank’. Professor Xu has long had a fascination with plant ecology. After achieving her BS degree in Botany at Shanxi University, China and a MS in Plant Ecology at the Institute of Applied Ecology, Chinese Academy of Sciences, China, she gained a PhD in Plant and Rangeland Ecology at North Dakota State University, USA, in 1998. After graduate school, she was hired as a Research Associate at South Dakota State University, and rose to the ranks of Assistant Professor, Associate Professor, and then Professor, in 2017. As well as undertaking research, she advises a number of graduate students and undergraduate researchers, and teaches several courses, including Plant Ecology, Advanced Plant Ecology, Field Ecology, and Principles of Ecology.

USDA-National Institute of Food and Agriculture