May 14, 2017Biology, Health and Medicine, Psychology and Neuroscience, Social Sciences and Humanities

Professor Matilde Inglese, Director of the Neurology Imaging Laboratory in the Icahn School of Medicine at Mount Sinai, is at the forefront of using sodium MRI as a means to better monitor and understand the pathophysiological changes caused during multiple sclerosis.

What is Multiple Sclerosis and How Do We Currently Diagnose it?

Multiple sclerosis (MS) is a debilitating disease of the Central Nervous System (CNS) that affects the brain and the spinal cord. Neurons, which relay signals from the CNS to the rest of the body, can communicate long distances in short periods of time thanks to a protective layer of fatty tissue known as myelin, which aids the efficient and fast transfer of information. In MS, the immune system attacks and destroys the myelin, leading to demyelination and causing significant delays or blockages in the transmission of impulses. This eventually causes damage to the nerves themselves which can sometimes be permanent.

Symptoms of MS can vary widely depending on the location and function of the nerves affected. While early symptoms like numbness, tingling or lack of sensation in a limb can be managed, the unpredictability of the progression of the disease means that these symptoms either disappear or quickly progress into worse outcomes such as difficulty walking, uncontrollable tremors and loss of coherent thoughts.

While there is currently no cure for MS, early diagnosis and treatment can lead to better management of symptoms and significantly improved quality of life. There is no single test to diagnose MS. Instead, a range of clinical tests are often used to eliminate possibilities of other conditions. Blood tests and lumbar punctures are used to rule out infections and other diseases with symptoms similar to MS. Magnetic Resonance Imaging (MRI) is one of the most commonly used methods to confirm an MS diagnosis, or to identify a pre-symptomatic disease known as radiologically isolated syndrome because of its ability to pinpoint the presence of MS lesions in different parts of the brain. 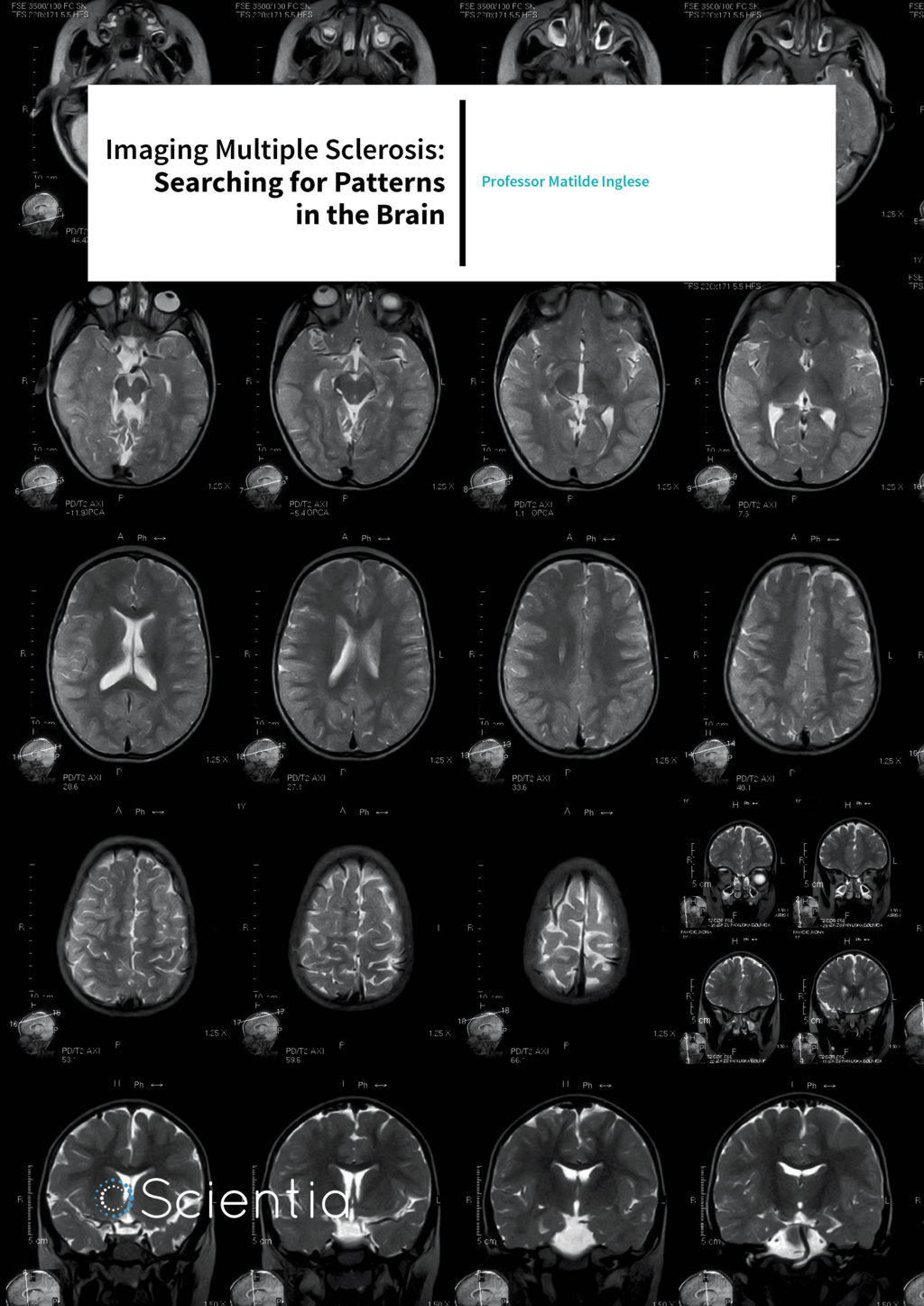 As a clinician, Professor Matilde Inglese is intimately aware of the situation for patients with MS. In many cases the disease affects young women in their most productive period of life, who become faced with a chronic, elusive and disabling disease with no cure and few reliable techniques for diagnosis. Talking to Scientia, she acknowledges that MS is a very difficult disease to study because of its unpredictability and heterogeneity. No two patients present with the same symptoms of MS. Revealing her motivation to enter the field of neuroimaging, she says: ‘Neuroimaging techniques are very attractive in that they provide an array of non-invasive tools to investigate in vivo the pathophysiology of the disease and a set of metrics to help personalise patient treatment.’ 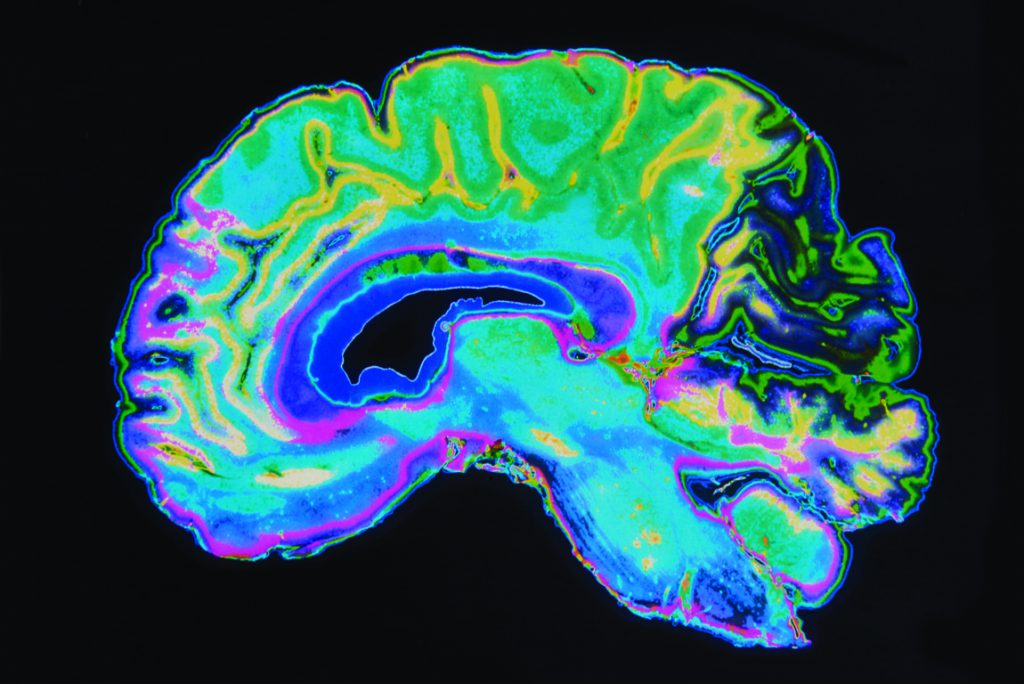 MRI, in particular, is a promising tool for diagnosing MS. MRI takes advantage of the huge amount of water molecules found in our body. Each water molecule contains two protons, which have an intrinsic magnetic moment. Under normal conditions, these tiny magnets, or spins, are randomly oriented. However, when a large magnetic field is applied, a considerable amount of protons tend to align their spins in the direction to the magnetic field, which leads to an equilibrium magnetisation proportional to the field strength. To obtain MRI images, a transverse component of this magnetisation is created. The time it takes to return to the equilibrium state, the relaxation time T1, depends on the environment or tissue types.

This time and the interaction of spins can be measured in particular ways and displayed by different shades in the resulting MR image. By additionally using contrast agents like gadolinium that can cross the blood brain barrier, the contrast of MS-associated lesions in the brain can be enhanced. This helps towards a more definite diagnosis. While over 90% of patients with MS show abnormal lesions in an MRI, the specificity of conventional MRI is still poor. All lesions appear similar on T2-weighted MRI scans regardless of their pathological substrate that ranges from inflammation, demyelination, degeneration, remyelination etc. Hence, there exists an urgent need for better imaging tools to better characterise the severity of the disease and to monitor its progression.

Sodium Imaging as a Predictive Tool for Disease Progression

MS presents with several pathological features in addition to inflammation, such as mutations in mitochondrial DNA, cuts in the axons of the neurons, production of detrimental nitric oxide and accumulation of iron and alteration of sodium homeostasis. Studies in both experimental models of MS and in post-mortem samples of patients with MS have suggested an increase presence and activation of sodium channels in MS plaques. Hence, measuring the level of activation of sodium channels in the brain and noninvasively quantifying the levels of sodium in the brain open up exciting opportunities for improved MS prognosis and monitoring.

Brain sodium MRI is an imaging technique that uses the principles of MRI to measure the sodium signal in different regions of the brain. Since sodium is not as abundant as water, the Signal to Noise Ratio (SNR) is poorer, the spatial resolution is lower than proton MRI and the technique requires longer acquisition times. Sodium MRI has been around for more than 20 years, but because of these disadvantages, the technique has not become widely used as a diagnostic tool. However, with recent technological advancements in both hardware and software, and with the advent of ultra-high field magnets, it is now possible to explore the use of sodium MRI as a tool for studying the pathophysiology and progression of disease. As new therapies for treating the neurodegenerative aspect of MS evolve, there is an unmet clinical need for better imaging techniques to non-invasively monitor response to such treatments.

Neuro-axonal degeneration is highly correlated with permanent disability in MS patients. However, the pathophysiological process that leads to neuronal injury is not well understood and there are no effective treatments to prevent or slow down the progression of disability. Several studies suggest that an increased influx of sodium ions into demyelinated axons leads to delayed axonal injury and associated symptoms. Furthermore, using therapeutic agents to partially block sodium from influxing into demyelinated axons protects against axonal degeneration in experimental models. Hence, measuring sodium concentration represents an important step in understanding the pathophysiological basis of the disease. 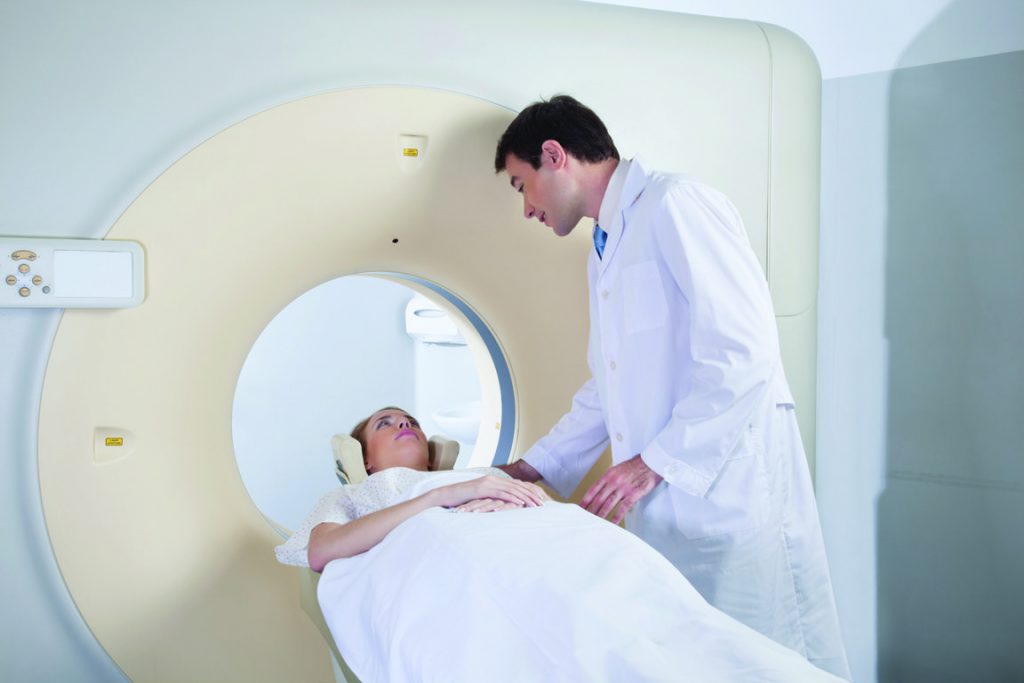 The first study implementing the use of sodium MRI on patients with MS was carried out by Professor Inglese and her colleagues in the Department of Radiology, New York University School of Medicine, where she was initially a postdoctoral fellow in 2001 then became an Associate Professor in 2007 in the Departments of Radiology and Neurology. The study, published in 2010 in the journal Brain, reported an increase in total sodium concentration (TSC) in the lesions of MS patients. More importantly, the researchers showed increases even in the apparently normal white and grey matter of MS patients compared to healthy controls. They also found a weak inverse correlation between sodium concentration in grey matter and the volume of grey matter – the higher the sodium concentration, the lower the volume of grey matter. The same correlation was not found for white matter, suggesting that the sodium concentration in grey matter could be used as a measure of earlier tissue injury.

In order to measure and distinguish between sodium levels of the two compartments, Professor Inglese’s group implemented a magnetic resonance 12 step phase-cycling pulse sequence in order to acquire a triple-quantum filtered sodium MRI, which offered an increase in the signal to noise ratio by 40% compared to previous methods. They also implemented and developed a technique using high field magnets (7 Tesla) to quantify ISC and intracellular sodium volume fraction (ISVF), which is an indirect measure of ESC. A decrease in ISVF implies a decrease in intracellular volume, which reflects an increase in extracellular space and consequently ESC. In a recent study reported in Brain, Professor Inglese and her colleagues used the above-mentioned techniques to measure both ISC and ISVF in 19 MS patients and 17 healthy controls. They sought to identify the relationship between intracellular and extracellular sodium with measures of lesion and brain volume, and to evaluate the clinical significance of abnormal sodium distribution.

In the study, they showed that ISC and ISVF values can complement TSC values to provide a clearer picture of the pathophysiology of the disease. While ISC values reflect changes in cellular metabolism related to mitochondrial and ion channel dysfunction, ISVF values reflect expansion of the extracellular volume related to cellular loss and development of tissue atrophy. It is known that abnormal cellular metabolism can either lead to cellular death or could even reverse back to physiological conditions. This suggests that increases in TSC and ISC may be useful in predicting and selecting patients who will particularly benefit from neuroprotective therapy even before structural damage occurs.

While these studies report very promising findings on the relationship between sodium concentration and disease progression, there is a need for these results to be confirmed in a larger cohort of patients and in longitudinal studies. Technical advances in the field should particularly focus on clearer distinctions between intracellular and extracellular sodium levels. Clinically, the field is moving towards combining sodium MRI with different conventional MRI modalities that are sensitive to neuro-axonal loss. Professor Inglese is optimistic about the future: ‘The next step is to extend far beyond the lab to understand the dynamics of changes in brain sodium concentration in relation to the progression of the disease’. With such advances, we hope this research will lead to better prognostic and monitoring tools that will not only help in understanding this complex disease, but also immensely improve quality of life for patients with MS. 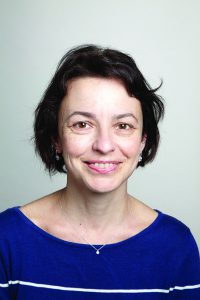 Professor Matilde Inglese is an Associate Professor of Neurology, Radiology and Neuroscience at the Icahn Mount Sinai School of Medicine, New York. She received her medical degree magna cum laude from the University of Genoa, Italy in 1992 and earned a PhD degree in 2004 from the same university after her formal training in neurology. After completing post-doctoral training in neuroimaging at San Raffaele Hospital, Milan, and in the Department of Radiology in New York University, she went on to become a fellow and subsequently an Associate Professor in the same department. Here, she started delving into sodium MRI and its applications in multiple sclerosis. Professor Inglese has authored and co-authored more than 150 publications in peer-reviewed journals, is on the editorial board of several journals and has served on grant advisory panels for the National Institute of Health, the National Multiple Sclerosis Society and for several international funding agencies.

Her current research in Mount Sinai is funded by the National Institute for Neurological Disorders and Stroke, the National Multiple Sclerosis Society and by the Congressionally Directed Medical Research Program in Multiple Sclerosis. Her focus is to identify mechanisms of degeneration that lead to clinical disability in order to provide markers to monitor the effect of neuroprotective treatments in patients.

Dr Lazar Fleysher, an Instructor in the Department of Radiology at Mount Sinai, has a broad background in physics and mathematics, with practical experience in the fields of data acquisition, image reconstruction, experiment design, protocol optimisation, post-processing, and statistical data analysis. He has contributed to the development of a quantitative sodium MRI technique which allows non-invasive quantification of intracellular sodium concentration and cell-volume fraction in the human brain. He has authored and co-authored more than 40 publications in peer-reviewed journals.

Dr Niels Oesingmann, a MR physicist in the UK Biobank, has extensive expertise in development of cardiac, body and brain applications. A former member of the Siemens R&D group, in the last 15 years he has managed collaborations for Ultra High-Field and Multinuclear Imaging at major university hospitals worldwide. He has contributed to the development of the triplequantum MR sequence for the acquisition of sodium imaging at 7 Tesla. He has authored and co-authored several peerreviewed publications and application manuals.