Science is the pursuit of knowledge – a search for an understanding. Sometimes that knowledge is simply collected and catalogued away for future reference (the laser was discovered in this manner) but, often, it is searched out vehemently to achieve something of importance. No other scientific endeavour has the potential to change the course of human history as much as Nuclear Fusion. And that’s precisely what Professor Michael Brown and his team at Swarthmore College are working on.

If you’ve ever been in a supermarket during the summer months, you’ll probably have come across a Sun jar. These small, solar-powered jars emit a steady glow of diffuse light and are so popular that a quick internet search returns countless do-it-yourself guides on how to make them for your garden. They look fantastic – almost magical – on a sultry summer’s night, when the Sun has gone away but the temperature remains comfortable enough to stay outside and enjoy the evening, and when the barbecue has burned down to a scattering of glowing embers. In such a serene setting, you’d be forgiven for indulging in the belief that Sun jars might actually contain a tiny part of the Sun itself – an idea reminiscent of fairy-tales and folklore but, somewhat surprisingly, an idea that forms the basis of one of the most important scientific pursuits of the twentieth century: nuclear fusion.

The Search for an Eternal Energy Source

One of the greatest problems humanity is ever likely to encounter is human-induced climate change. While the mass media might have you believe that the subject is a controversial one, over 97% of practicing climate scientists agree that global warming is the result of human activities, such as burning fossil fuels to generate energy. In other words, we need to act now in order to avoid a climate catastrophe for ourselves and for future generations.

Virtually all of the energy that we rely on for fuel and electricity comes from the Sun. Plants feed on sunshine during photosynthesis, animals and sea creatures feed on these plants, and when living things die, they can become ultimately transformed into fossil fuels such as coal, oil and natural gas through a gradual process that takes millions of years. Burning these fossil fuels releases carbon dioxide into the atmosphere – the primary driver of global warming – and so we must drastically reduce our reliance on them if we are to prevent the most catastrophic consequences of climate change.

‘Attaining fusion on Earth requires achieving stellar densities and temperatures, and holding both for a substantial period of time’

Most of our renewable energy can also be traced back to the Sun. Wind, for example, which turns turbines across the world day and night, is a result of inequalities in areas of atmospheric pressure caused, themselves, by differences in air temperature. Biomass – plant matter grown using sunlight – is either used directly as an energy source through combustion, or can be converted to biofuel through additional processes. Solar cells capture light emitted from the sun and convert its energy directly into electricity. But where does the Sun get its energy? 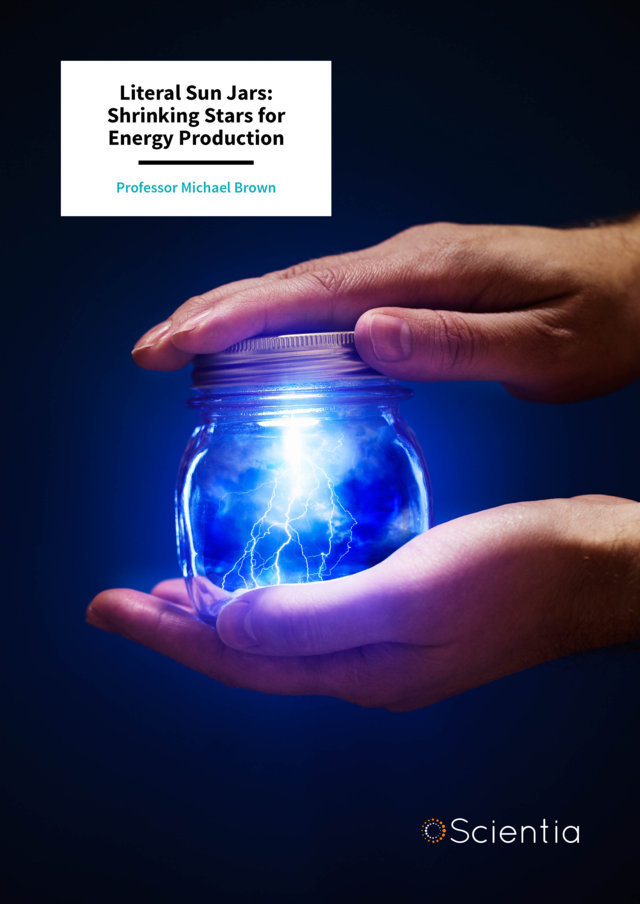 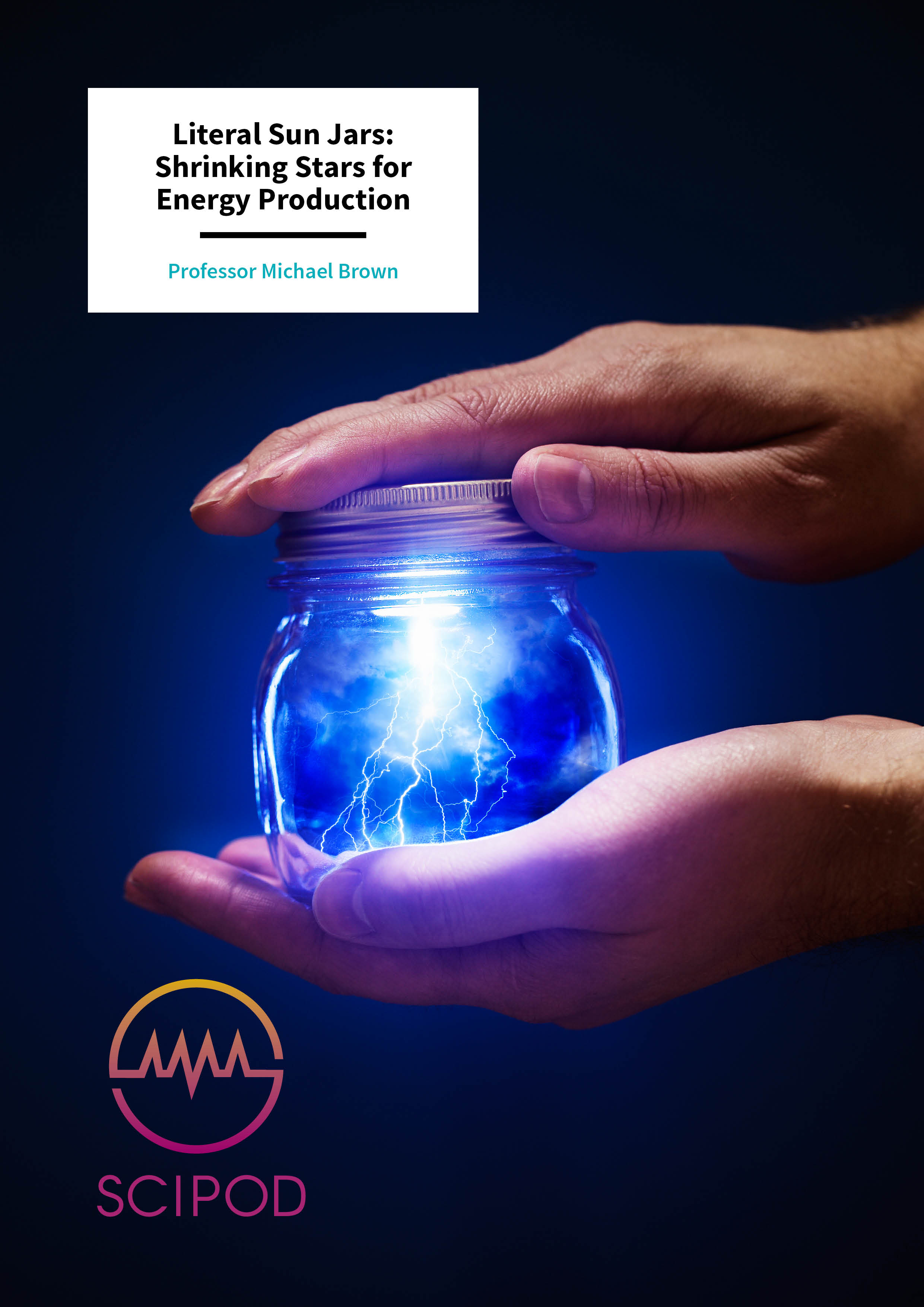 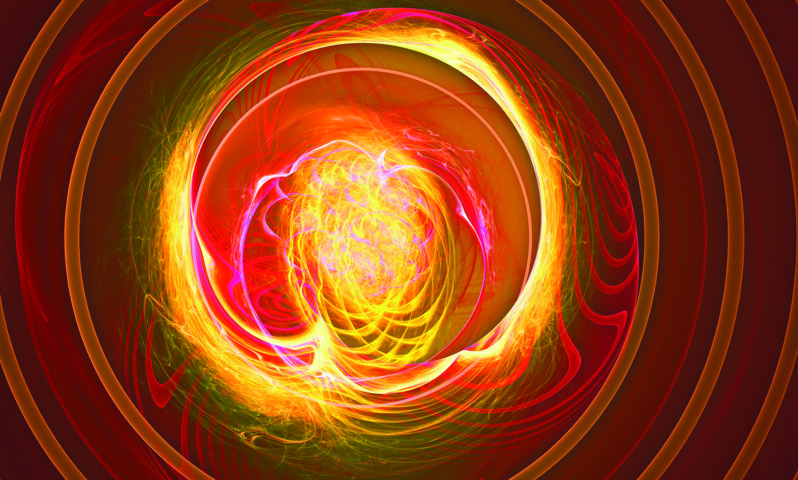 Stars, such as our Sun, begin their lives in stellar nurseries – extremely large clouds of gas and dust with a roughly continuous density (known to physicists and astronomers as a homogeneous state). However, due to the universal tendency for things to become less ordered as time progresses, some gas and dust particles inevitably bunch together causing localised areas of slightly higher density.

As the strength of gravity depends on the amount of mass, and the mass of an object depends on its density, the gravity of such areas begins to attract more and more particles of gas and dust in a self-perpetuating process. Each particle drawn into our new ‘protostar’ causes the density at its centre to increase. As more and more particles arrive, the density – and temperature – becomes so great that the nuclei of hydrogen atoms can actually fuse together to form helium nuclei. This process – called ‘nuclear fusion’ – releases even more energy into the mix, which allows greater numbers of nuclei to fuse together, continuing the cycle. This self-perpetuating process is what will power the newly-formed star for the rest of its life.

While most of the energy we use can be traced back to nuclear fusion in the Sun, researchers such as Professor Michael Brown and his team at Swarthmore College, Pennsylvania, are trying to recreate this process here on Earth. As you might imagine, the problem is not a trivial one: ‘Attaining fusion on Earth requires achieving stellar densities and temperatures, and holding both for a substantial period of time,’ Professor Brown explains. Harnessing the process that the Sun uses to produce its energy has the potential to outshine all other sources of energy on Earth. 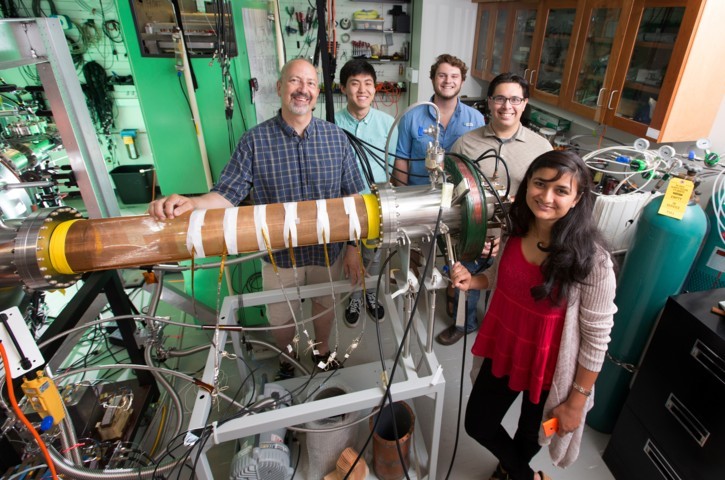 Nuclear Fusion has long been the pursuit of scientists around the world. It’s the holy grail – not only potent enough to satisfy all of society’s energy needs, but potentially capable of providing us with a means of exploring our galaxy (if you’re a fan of sci-fi, you will probably already be familiar with the concept of a ‘fusion drive’) – and pulls in billions of pounds of funding each year. Currently, there are two major players in this field: The National Ignition Facility (https://lasers.llnl.gov/), a $20 billion project near San Francisco that aims to use lasers to substitute the vast gravitational pull of the Sun – this is known as Inertial Confinement Fusion (ICF); and the ITER project in France (https://www.iter.org/), another $20 billion project that is hoping to produce fusion reactions in a process known as Magnetic Confinement Fusion (MCF). There are, however, smaller-scale projects taking place around the globe that hope to advance the field of Nuclear Fusion at a fraction of the cost.

One such project is the Accelerating Low-Cost Plasma Heating and Assembly (ALPHA) scheme (https://arpa-e.energy.gov/?q=arpa-e-programs/alpha) funded by the US Department of Energy (DOE) through the Advanced Research Projects Agency – Energy (ARPA-E) branch. Professor Brown and his team work on a project known as the Swarthmore Spheromak Experiment (SSX, http://www.swarthmore.edu/ssx-lab), which is supported through the ARPA-E ALPHA project and aims to explore a process known as Magneto-Inertial Fusion. Magneto-Inertial Fusion, or ‘MIF’, is an intermediary approach, somewhere between ICF and MCF, which Professor Brown describes as ‘a new approach to fusion energy, to generate small parcels of hot magnetic plasma, then compress them, like when petrol is compressed in a car engine.’

‘Mainline fusion efforts cost several billion dollars,’ Professor Brown adds. ‘What we are working on is risky but potentially much cheaper.’ These small parcels of plasma essentially contain the same ingredients as the centres of stars but are on the same scale as the Sun jars mentioned earlier. To create these literal Sun jars, Professor Brown and his team of researchers are investigating the use of something they call a ‘Twisted Taylor State’ as the fusion medium. 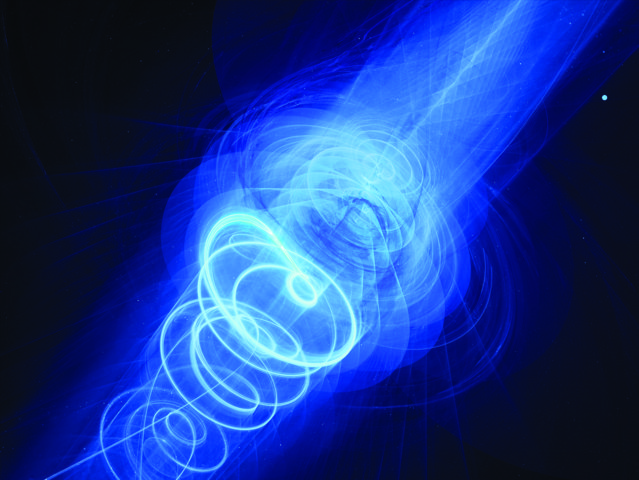 So, what exactly is a Twisted Taylor State? It’s essentially a volume of plasma – a hot gas of charged atoms – that is formed into a twisted structure using magnetic fields. ‘We first observed the structure at our lab in 2014,’ says Professor Brown. ‘Our experiments now concern measuring the Equation of State of this parcel of plasma, so that we can predict how the temperature and density might change as we compress it.’

The Equation of State (EOS) is a mathematical relationship that describes how the pressure, temperature and volume of a gas – or plasma – interact with each other. Understanding the EOS of a system allows scientists to make accurate predictions about how that system will evolve over time or respond to external factors. ‘Our goal for the ALPHA project is to accelerate a Taylor State to high speeds, then stagnate and compress the object into a suitable fusion target,’ says Professor Brown. This will allow his research team to investigate if a Twisted Taylor State of plasma could be used to produce nuclear fusion reactions.

As you might expect, the SSX team employ a variety of complicated techniques and apparatus in their pursuit of nuclear fusion – coaxial plasma guns, stagnation flux conservers, ion Doppler spectroscopy and HeNe laser interferometry are just a handful of terms that feature throughout their publications. What you might not expect, however, is that the research team using these technologies primarily comprises undergraduate students. Swarthmore College is an example of a Liberal Arts College – of which there are hundreds in the US – where the focus is on undergraduate study within the fields of Liberal Arts and Science. In contrast to the UK, where research is primarily undertaken by postgraduate students and post-doctoral researchers, Professor Brown’s team mainly consists of senior undergraduate students, including Emma Suen-Lewis, Luke Barbano, and Jaron Shrock who have each contributed substantially to the project’.

Although the project is far from complete, Professor Brown and his team have already made some promising progress: ‘We have completed analysis of compression events of our un-accelerated Taylor State and have identified a good model EOS,’ he says. ‘Results are being reported in two papers under review.’ This model EOS will be used to guide their experiment when they begin to ramp up to more extreme states of compression that are more in tune with what’s expected for the nuclear fusion process to start. ‘When we push to more extreme compression, we will be guided by our EOS to predict densities, temperatures, and magnetic fields,’ Professor Brown explains.

On the future of the project, Professor Brown is optimistic. He feels that his team is in a strong position to complete their work during the second half of the project: ‘Our postdoc, Manjit Kaur, now has over a full year of experience, and we have assembled a team of talented collaborators including Swarthmore students, the simulation team, and Bryn Mawr Professor David Schaffner.’ With the ability to satisfy society’s energy needs through this new method of clean energy generation, it’s no understatement to say that the work being undertaken by Professor Brown and his students has the potential to change the course of human history. 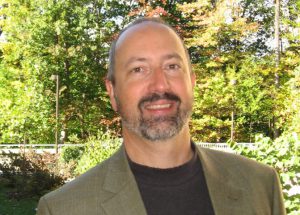 Professor Michael Brown completed his undergraduate degree in physics at Pomona College in 1981, before obtaining a PhD from Dartmouth College in 1987. He lectured at the California Institute of Technology and Occidental College before moving to Swarthmore College in 1994, where he is the Morris L. Clothier Professor of Physics. His research interests include magnetothermodynamics, turbulence, fusion energy, and self-organisation in turbulent systems. In 2008, he received the American Physical Society Award for a Faculty Member for Research in an Undergraduate Institution ‘for his outstanding contributions to plasma physics made possible by his development of a world-class spheromak laboratory at Swarthmore College, and for his energetic mentoring of undergraduate students’. Professor Brown is a Fellow of the American Physical Society.

US Department of Energy, ARPA and OFES