For over 30 years, Professor Michael O’Donnell, based at the Rockefeller University in New York, has focused on the mechanisms involved in the duplication of genetic material in cells, a process known as DNA replication. Professor O’Donnell’s work spans from the early 1990s, when his team was the first to discover a ring-shaped protein that encircles DNA and clamps the replication machine to DNA. Most recently, the team has been studying the proteins involved in mammalian DNA replication.

The ability to reproduce is one of the most fundamental mechanisms needed by every cell. In order to reproduce, cells must be able to make a copy of their own genetic information and pass it on to the daughter cells. This is known as DNA replication.

The genetic material present in every cell – DNA – is made of two complementary strands, organised in the classic double helix. Each strand is a long chain with four different bases, adenine, cytosine, guanine and thymine, and the sequence of these bases forms a code needed to make every protein required for life. It is therefore essential that the DNA sequence is copied with great precision and accuracy.

In the DNA helix, adenine bases only pair with thymine, and the cytosine bases only pair with guanine. The DNA polymerase recognises each base along the template sequence and finds the correct base pair match from a pool of free bases. The replicating machine contains two DNA polymerases, one for each unzipped strand, resulting in two new duplex copies and providing all the instructions needed for two new living cells. Indeed, Dr Arthur Kornberg (Stanford University), who was awarded a Nobel Prize in 1959 for the discovery of DNA polymerases, provided postdoctoral training to Dr (now Professor) Michael O’Donnell.

‘The finding came as a complete surprise, which is actually quite typical of most scientific discoveries. This puzzle has a beautiful solution.’

At first glance, matching two sets of bases may seem an easy process, but when you take into account that it needs to be repeated 6 billion times to make a new copy of DNA in a human cell, then it is inevitable that mistakes can happen and must be minimised. This susceptibility to error may suggest the need for a slow and careful enzyme, but surprisingly DNA polymerases are quite fast and in bacteria can go 1000 bases every single second.

For Professor O’Donnell, now at the Rockefeller University in New York, this creates an interesting conundrum: How can the DNA polymerase stay bound to DNA and accurately replicate DNA while at the same time move along the new strand at a relatively high speed? ‘It seems a contradiction, that a DNA polymerase could achieve an extremely tight grip to DNA, yet move very fast during synthesis,’ explains Professor O’Donnell. ‘The finding came as a complete surprise, which is actually quite typical of most scientific discoveries. This puzzle has a beautiful solution.’ 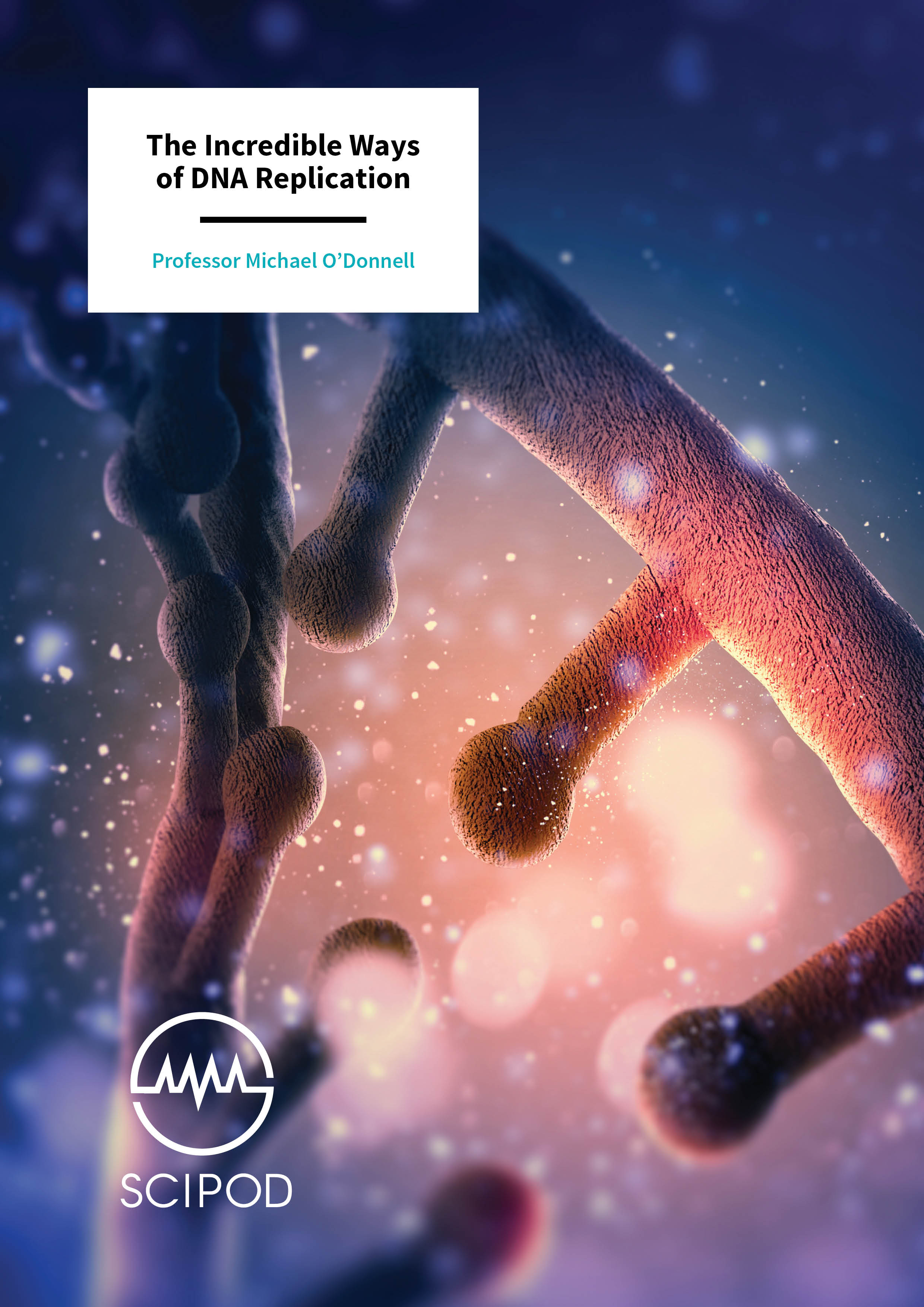 The first clue came quite unexpectedly in the early 1990s. Professor O’Donnell had started a set of experiments with circular DNA (typical of bacteria) but ran out of this half-way through his experiments and decided to try linear DNA instead. This lucky decision would turn out to be key in solving the mystery. ‘I ran out of circular DNA, but there was a linear DNA in the freezer so I tried this instead,’ said Professor O’Donnell. ‘To my dismay, the protein did not bind the linear DNA. I tried it again, thinking I′d made a mistake, but still the protein did not bind the linear DNA.’

Professor O’Donnell realised that the simplest explanation was that the protein is also a circle, and encircles the DNA, and therefore slides off the end of linear DNA but stays on circular DNA because it has no ends from which to slide off. The researcher knew this was a crazy idea at first because there were no other proteins known to do this. Professor O’Donnell confirmed this provocative idea when linear DNA with blocks at the ends behaved the same way as circular DNA, but when the end-blocked DNA was cut in two pieces by a special DNA cutting enzyme, the protein did not stay on the cut DNA, implying it was sliding off the new and unblocked DNA end. Professor O’Donnell proposed the circular structure of the protein and named the protein a ‘sliding clamp’.

Many scientists did not accept the interpretation of a ring protein, so Professor O’Donnell enlisted the help of Professor John Kuriyan at Rockefeller University, a world-leading expert in X-ray crystallography (a method to determine the atomic structure of a protein) to determine the exact structure of this enigmatic protein. ‘When John called me up to take a look at the results, I′ll never forget his words “Mike – you wanted a doughnut, and we give you a doughnut,”’ joked Professor O’Donnell. ‘Indeed, it was a ring, but never would I have expected it to look so very beautiful.’ It turned out the sliding clamp protein has a wonderful structure, built from two subunits, each having three identically shaped domains that together formed a beautiful six domain circle.

Exploring Ways to Load the Clamp

Eventually, the team realised the clamp loader cannot be thought of as separate components with separate functions, but as a single multi-component machine that opens and closes the clamp. Professor O’Donnell’s biochemical studies, in collaboration with Professor Kuriyan’s structural work, revealed a beautifully orchestrated mechanism in which the clamp loader binds to the enzyme, warping the clamp in such a way that the ring opens up, allowing DNA to enter into the centre. Once the DNA is inside, the clamp loader changes its conformation, allowing the clamp to close.

‘It is exciting to obtain these puzzle pieces, put them in place, and watch the picture that emerges in your mind and before your eyes. The answers almost always unexpected, and not the way one would have imagined.’

At the same time as this work in bacteria was being carried out, several research groups were also working on a mammalian system to study replication. Among the proteins identified, there were two that caught Professor O’Donnell’s attention: one called PCNA and one called RFC. ‘John Kuriyan and I proposed that PCNA would be a ring of six domains arranged on three subunits and that RFC would be a clamp loader.’

In continued collaboration with Professor Kuriyan, Professor O’Donnell’s team showed that the bacterial and mammalian clamp and clamp loader have a strikingly similar structure. ‘The nearly identical structure of human and bacterial sliding clamps supports the hypothesis that humans and bacteria evolved from a common ancestor cell that lived billions of years ago. The structure of the sliding clamp from this ancient cell was passed down through the eons that followed, while different multicellular animals like us evolved. We have come a long way in evolution from a single cell bacterium, but deep down inside at a molecular level, we work in much the same way,’ explained Professor O’Donnell.

DNA in the Middle

After solving the clamp mystery, Professor O’Donnell’s research interests expanded to include not only the clamp/clamp loader but also all the components involved in DNA replication, in both eukaryotic cells (like mammals) and bacteria. After a painstakingly slow and complex process, the team was the first to purify and reconstitute a functional eukaryotic replication machine involving 31 different proteins with each component individually cloned and purified.

The team knows this is only the first step and there remains a long road ahead of them, along with the work of many other laboratories, to fully understand DNA replication. They may not know exact details yet, but they have no doubts this will be a highly regulated and complex mechanism. After all, these proteins must be able to cope with errors during replications as well as orchestrate numerous encounters with multiple enzymes and unrelated proteins. Professor O’Donnell is very excited about this field, stating ‘Many labs worldwide work on this complex replication machinery, and we look forward to all of our labs contributing pieces of the puzzle that finally, someday, understand the whole picture. It is important to human health and disease, because when gone awry, the process makes mistakes that can cause cancer. So, understanding exactly how it works will shed light on new medical applications to help people.’

Professor O’Donnell adds, ‘the mammalian system is much more complicated than viral or bacterial systems and very little is presently known about how its functions. Many of its components are present to regulate the replication machinery, or simply known to be important for replication through genetic and cell biology studies, leaving the actual mechanistic understanding of function and regulation to biochemical, biophysical and structural approaches.’

For Professor O’Donnell, this field is at a turning point as different areas of DNA replication, repair, and recombination are now merging into one big field, providing new opportunities to understand how multiple proteins operate together to produce and maintain the genetic instructions that DNA provides for disease-free life to exist.

The excitement for Professor O’Donnell is unmistakable. ‘It is exciting to obtain these puzzle pieces, put them in place, and watch the picture that emerges in your mind and before your eyes. The answers are almost always not the way one would have imagined. The way Nature works, and figuring it out with the limitations of our mind, is a very humbling experience. But each time that you figure out one of those puzzle pieces, the reward is amazing and deeper felt than almost anything else life has to deliver.’