The prevalence of anxiety and mood disorders is on the rise worldwide. Men and women experience different types of anxiety disorders at different rates – this may be partially due to sex specific differences in the brain. To understand this difference Professor Roland Bender, in the lab of Professor Gaby Rune, at the University Medical Center Hamburg-Eppendorf (UKE), Germany, studies how the male and female brain respond differently to sex hormones.

However, the overall concentrations of these hormones circulating in the bloodstream are different between the sexes and lifetime exposure patterns vary significantly. In addition to their expected roles, sex hormones carry out functions in the brain that are not necessarily related to gender or reproduction.

Sex hormones have been shown to affect areas of the brain associated with memory, emotional processing, and numerous psychiatric disorders. In light of this, researchers are working to understand how the brain accounts for variation in hormone levels between the sexes. The research team at the Institute of Neuroanatomy, headed by Professor Gaby Rune, University Medical Center Hamburg-Eppendorf (UKE) in Germany, is interested in illuminating the different ways that male and female brains utilise and respond to sex hormones.

The human brain is composed of networks of millions of brain cells, called neurons, whose firing patterns are the underlying basis of every thought we have and sensation we experience. Neurons communicate with one another through tiny branches called dendritic spines that touch neighbouring cells at contact points known as synapses.

When a neuron is stimulated enough to fire, its synapses release neurotransmitters, the brain’s messenger molecules, that either stimulate or dampen a response in its neighbour. Professor Bender’s team is specifically interested in synaptic plasticity, the ability of neurons to form new connections with one another by forming new synapses in the amygdala, an area which is particularly related to fear. He says that, ‘we want to identify molecular mechanisms of neuronal plasticity in the amygdala that work in males and females differently.’ 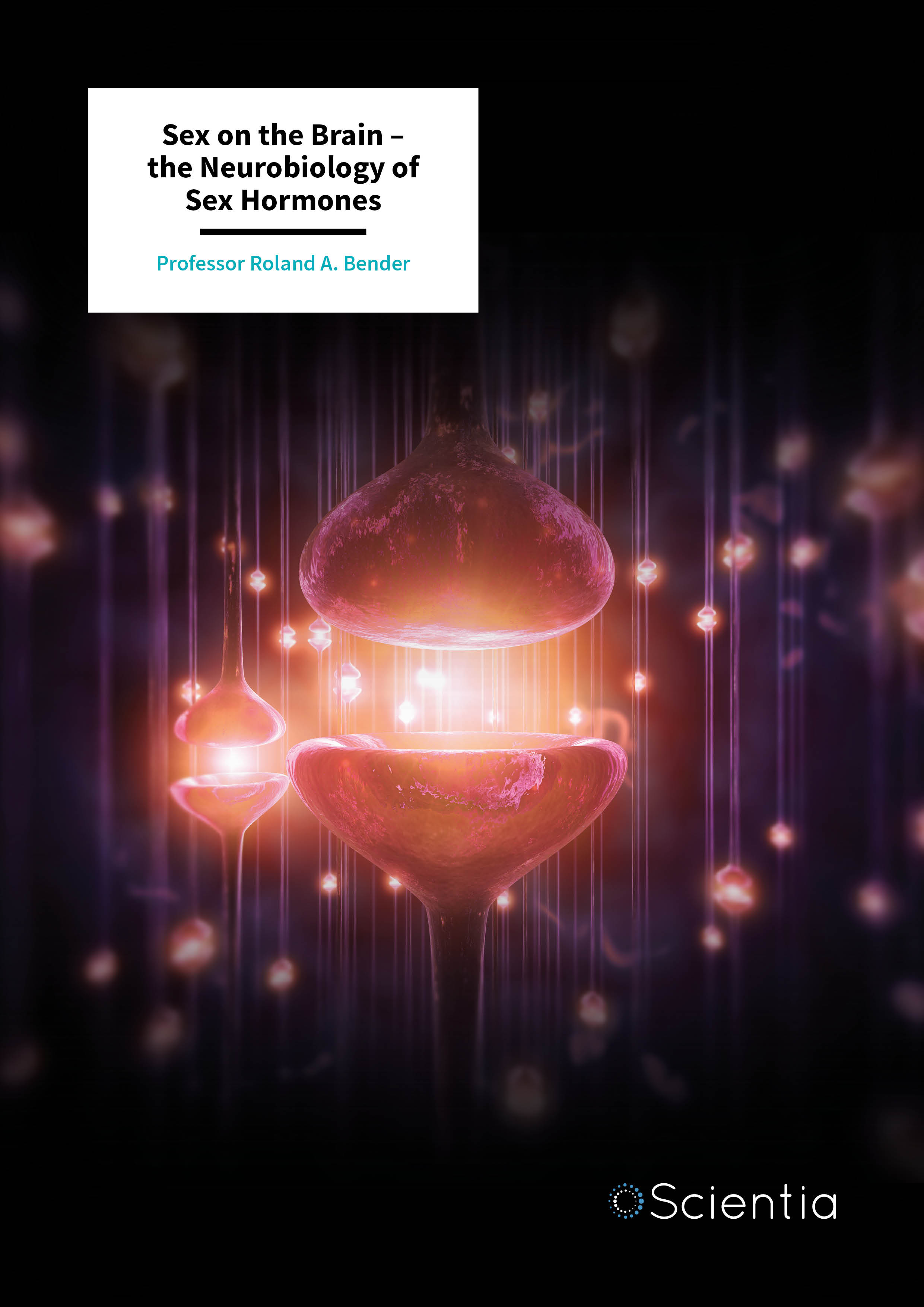 ‘We want to identify molecular mechanisms of neuronal plasticity in the nervous system that work in males and females differently.’ 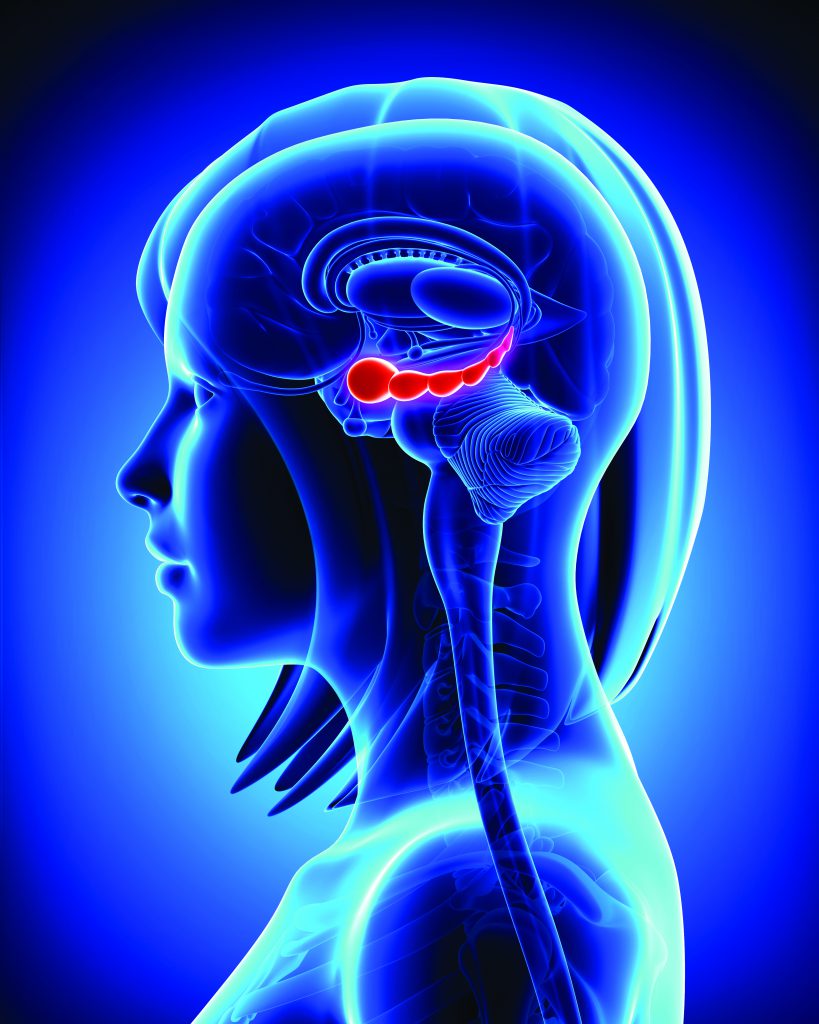 Professor Bender explains that, ‘there is undoubtedly a difference between males and females with respect to exposure to sexual hormones throughout life, which can be expected to result in differing molecular mechanisms within the brain to cope with this, because all the predominant sexual hormones also influence neuronal function.’

Pioneering studies supporting this assumption have been performed in the hippocampus. The hippocampus is a region of the brain that is required for converting short term memories into long term memories and storing spatial memories that aid in navigation. Within the hippocampus, higher numbers of synaptic connections, as counted by the number of dendritic spines, is associated with better memory.

Over the past few decades, it has been hypothesised that dendritic spine number is regulated by the sex hormones produced in the gonads. In mice, both males and females lose a significant number of synaptic connections and perform poorly on memory tasks following gonad removal – these connections and cognitive performance can be restored by regular oestrogen injections for females, or testosterone injections for males.

Further, treating animals with the hormone of the opposite sex does not necessarily restore synaptic connections – the neurons preferentially respond to the hormones associated with that animal’s sex – suggesting that the hippocampus responds to these hormones in a sex specific manner. 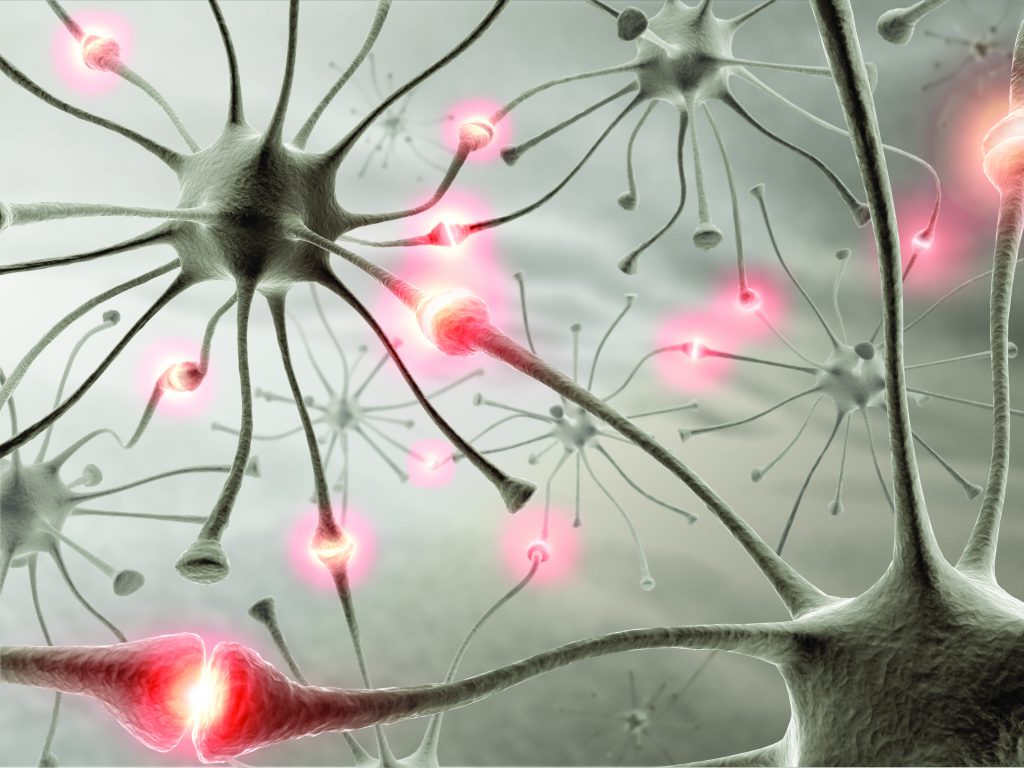 In post-menopausal women and elderly men, a reduction in the levels of these hormones are associated with the cognitive decline of aging. Understanding how the hippocampus utilises these hormones to maintain robust synaptic connections could help doctors better prevent and treat memory decline with age.

Professor Rune’s institute was the first to demonstrate that the hippocampus is also capable of producing its own oestrogen hormone independent of the gonads, achieving oestrogen levels within the structure that are much higher than those circulating in blood. In the female brain, this localised oestrogen works to maintain synapses and a process known as long-term potentiation, the strengthening of the connections between two neurons.

Long-term potentiation is widely held to be a key component of memory formation in the brain and is essential for learning. In mice, inhibiting the ability to produce oestrogen impairs long-term potentiation and leads to synapse loss in the female brain, but has no effect on males. These findings are consistent with observations of cognitive decline in women following menopause, when oestrogen levels drop significantly. Professor Rune’s team hypothesises that sex specific responses to sex hormones in the brain are cemented early in development during sexual differentiation.

In these situations, rather than performing as standard hormones, the behaviour of the hormone molecules is more closely aligned with neurotransmitters. Professor Rune explains how, ‘these hormones can be produced within the brain by the neurons themselves, and may thus act as neurosteroids, rather than as sex hormones coming from the periphery.’ Neurosteroids are locally produced steroids that can also influence neuronal activity and act to relieve anxiety.

In women hippocampal hormone levels cycle with blood levels of oestrogen during the menstrual cycle, suggesting that while the hippocampus is producing its own sex hormones, production is related to factors that influence hormone levels elsewhere in the body. Though the male hippocampus also produces its own oestrogen, levels of the hormone in the male brain are much lower, supporting the idea that sex hormones are utilised differently between males and females.

Professor Rune’s lab has found that in both sexes, GnRH (gonadotrophin releasing hormone) appears to start the cascade of hormonal responses that lead to increased synapse formation through stimulation of oestrogen production in females and testosterone production in males, though some steps in the male pathway are less clear. Many questions remain about how GnRH gets to the hippocampus in the first place and the implications this carries for mental health and cognitive performance. 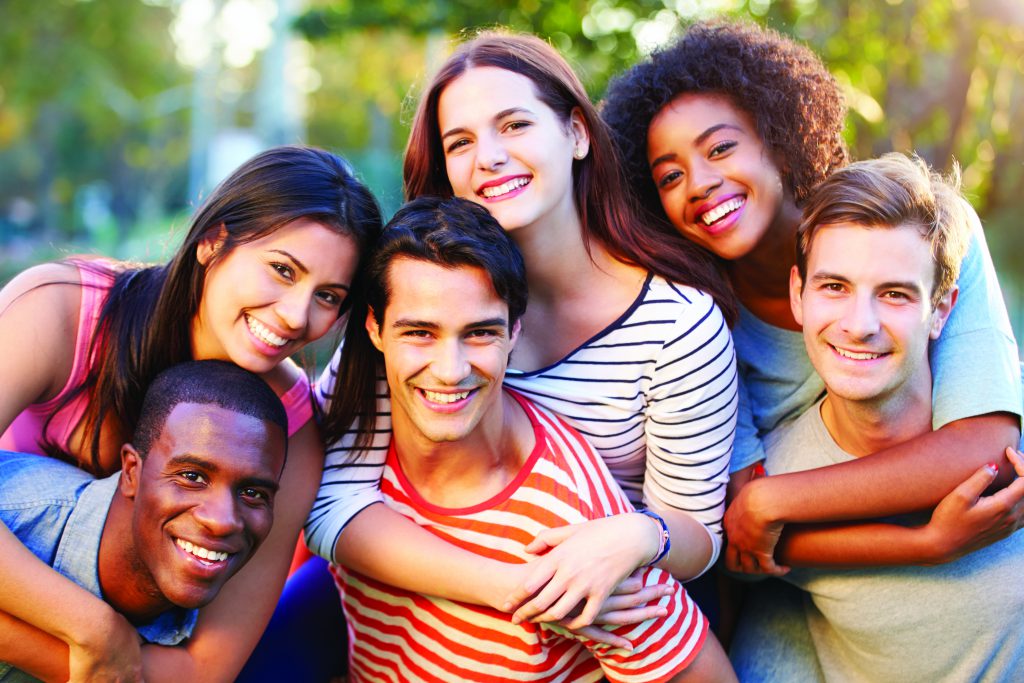 Fear and the Female Brain

The amygdala is an area of the brain central to the processing of emotions and emotionally charged memories. As a major player in the brain’s fight or flight response to danger, it is one of the primary areas responsible for regulating fear and aggression. Damage to the amygdala can impair the ability to manage stressful situations and feelings of fear, and this region is highly implicated in anxiety disorders.

Like the hippocampus, the amygdala shows sex-specific differences that may differentially impact how men and women process fear and anxiety. Women develop anxiety disorders at nearly double the rate of men, suggesting that the biological underpinnings of anxiety regulation may operate differently between the sexes. By illuminating how sex hormones interact with the amygdala, Professor Bender’s team in the Institute of Neuroanatomy hopes to provide the foundation for interventions that could improve treatment options for anxiety sufferers.

Professor Bender elaborates: ‘By identifying mechanisms of neuronal plasticity within the amygdala that are responsive to sex hormones/sex neurosteroids we hope to get a clue how these influence amygdala functions such as the fear response, and whether differences between the sexes could help to explain the higher prevalence of women to develop certain anxiety disorders.’

In a recent study, Professor Bender’s team compared the activity of oestrogen in the amygdala of male and female mice and the effects of a drug, letrozole, that inhibits oestrogen synthesis. They were specifically interested in the behaviour of the enzyme aromatase, that converts excess testosterone to oestrogen – letrozole blocks this conversion.

The team focused on the basolateral section of the amygdala, a key component of the fear circuit in the brain and found that male and female brains produce aromatase at similar levels and have a similar number of receptors for oestrogen. However, when the animals were treated with letrozole, females lost a large number of dendritic spines and long-term potentiation came to a halt, while the structure of the male amygdala was largely unaffected.

Similar to the hippocampus, synaptic plasticity in the amygdala is regulated by sex hormones in a sex specific manner. These results are the first steps in promising research into differential treatment approaches to anxiety disorders in males and females. Further, aromatase inhibiting drugs like letrozole are commonly used in breast cancer therapy – these results carry important weight for consideration during treatment selection in women with breast cancer. 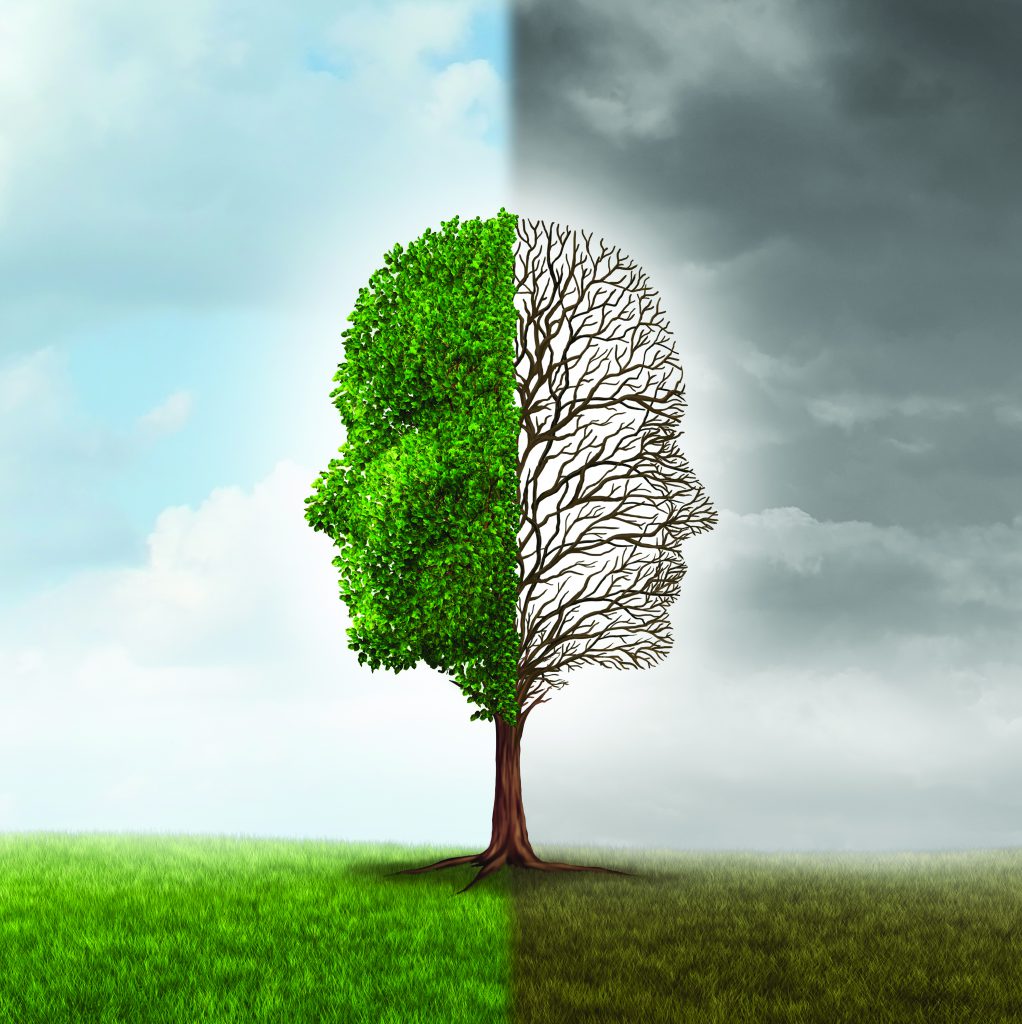 The Future of Hormonal Research

Professor Roland Bender and his research group have made important strides in understanding sex specific differences in the neurological responses to sex hormones. Moving forward, the team hopes to illuminate how these differences develop early in life and learn more about the hormones and pathways that impact synaptic plasticity in the male and female brain. 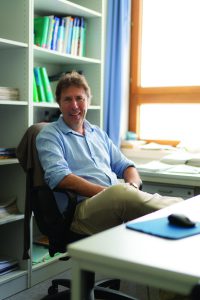 Professor Roland Bender completed his undergraduate education in biology and earned his doctorate in anatomy at the University of Freiburg, in Breisgau, Germany. After completing postdoctoral work at the University of Freiburg and the University of California, Irvine, he joined the faculty at the University Medical Center Hamburg-Eppendorf (UKE), Germany, where he currently serves as a Professor and the Deputy Director of the Institute of Neuroanatomy. Professor Bender is fascinated by the molecular mechanisms of neuronal plasticity that behave differently in males and females. He has won multiple teaching awards such as ‘Teacher of the Year’ in 2013, 2017 and 2018 at the UKE and has published numerous peer-reviewed articles on neural plasticity in the brain.