May 22, 2018Health and Medicine, Psychology and Neuroscience, Social Sciences

We often hear how impairments in learning can have a negative impact on peoples’ lives but what about problems with forgetting? The inability to forget the association between everyday cues and previous traumatic events underlies anxiety-related disorders, such as post-traumatic stress disorder (PTSD). Professor Stephen Maren at Texas A&M university is using cutting-edge techniques to reveal the neural basis of the relapse of traumatic memories.

The Importance of Forgetting

Learning to predict when and where threats are going to present themselves is an essential skill for survival. From gazelle on the Serengeti, to kids in the schoolyard, we learn to associate certain innocent cues, such as hearing the school bell ring with negative outcomes such as the threat of being bullied. After this kind of learning, the cue itself is enough to induce a fearful response in us as we anticipate the associated negative outcome.

This fear response prepares you for action by causing changes in heart rate, blood pressure and mental state that equip you to either run from the threat or fight for survival. It’s clear how this learning ability would be beneficial by keeping you one step ahead in a dangerous world, however, what is equally important is the ability to forget these associations when they are no longer relevant.

For example, there’s no use being fearful of the school bell as an adult as there is no longer a threat. In fact, having this fear response as an adult could negatively impact your life. Although this is a simplistic example, the inability to adapt by forgetting fear memories is a core problem in many anxiety- and stress-related disorders, such as post-traumatic stress disorder (PTSD).

In these disorders, innocent cues continue to be associated with traumatic events and can induce a fear response well after the threat has passed, causing prolonged periods of unnecessary stress and anxiety. Behavioural therapy for these disorders focuses on inducing the forgetting of fear memories, a process termed ‘fear extinction’. This is not always effective however, and relapses of fear memories often take place after therapy, particularly during periods of stress or uncertainty.

‘My laboratory studies how the brain learns, remembers, and dampens memories of traumatic events. We hope to use this knowledge to develop novel approaches to the treatment of anxiety and stress disorders, including post-traumatic stress disorder (PTSD).’

The events taking place in the brain that cause these relapses of traumatic memories are still not clear. Professor Stephen Maren at the Department of Psychological and Brain Sciences at Texas A&M University, has been working in this area of neuroscience for over 20 years. Professor Maren is clear that research into this area has important therapeutic potential. He describes how, ‘my laboratory studies how the brain learns, remembers, and dampens memories of traumatic events. We hope to use this knowledge to develop novel approaches to the treatment of anxiety and stress disorders, including post-traumatic stress disorder (PTSD).’ 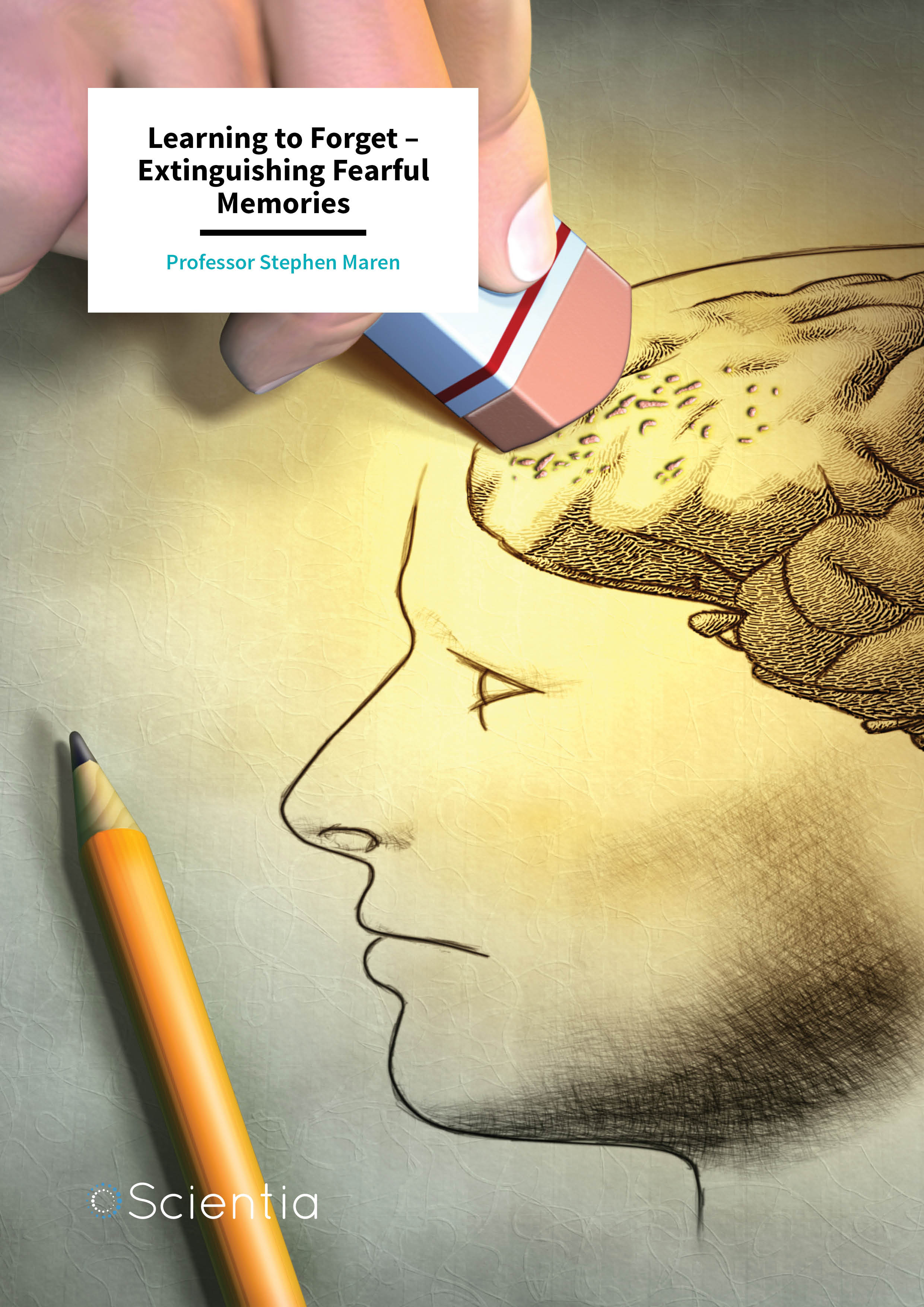 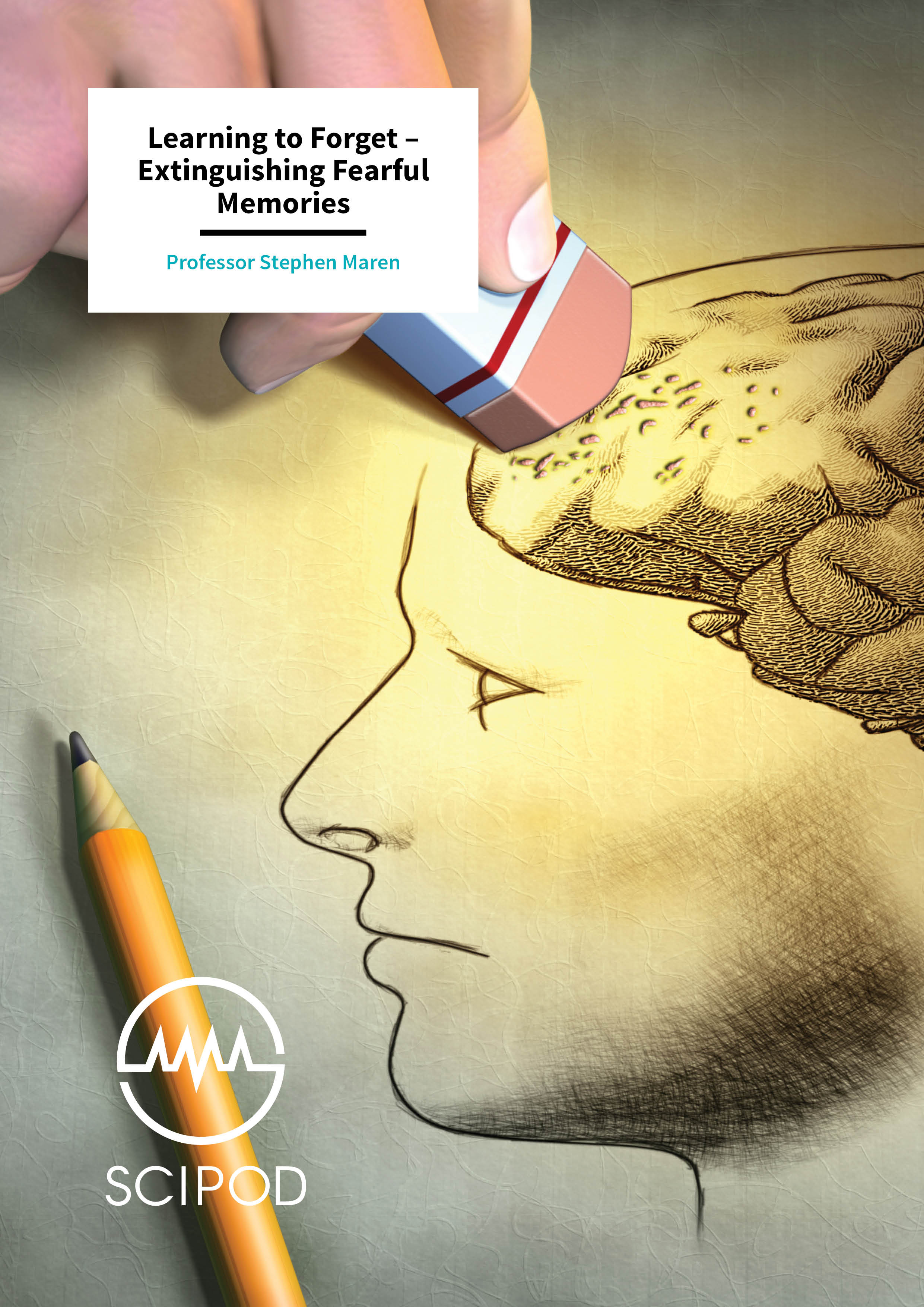 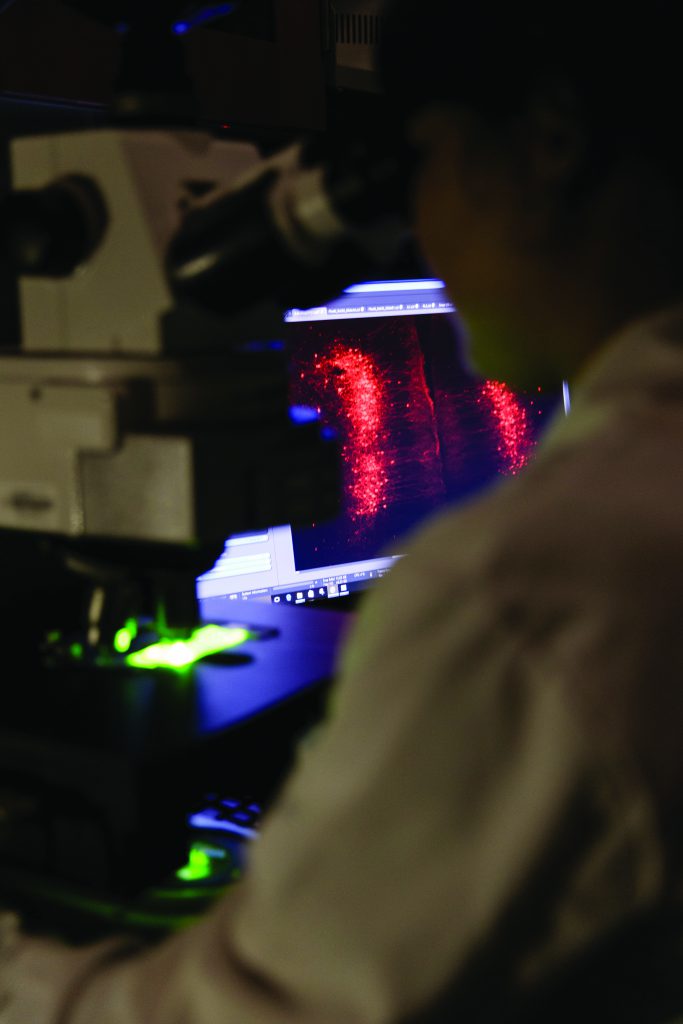 In order to understand how relapses of extinguished fear memories take place in patients, and how these might be controlled, it is important to identify the brain regions involved. The brain contains highly specialised cells called neurons that connect together to form huge networks. These networks can be within brain regions, but also allow communication between different areas of the brain. There are two brain regions that have previously been found to play a role in the fear extinction process: these are the hippocampus, which is involved in memory processes, and the infralimbic cortex, which contributes to the regulation of emotion.

These two brain regions are connected by neurons that carry information from the hippocampus to the infralimbic cortex. Professor Maren and his team are using cutting edge techniques to investigate the nature of this connection and the role it plays in fear extinction. They are using a pioneering method, called optogenetics, in which a virus is used to introduce light-sensitive receptors into specific types of neurons in a target brain region.

They then used another elegant method to alter the activity of this pathway in awake rats. In this case they introduced ‘Designer Receptors Exclusively Activated by Designer Drugs’ or DREADDs into these neurons. These receptors are not normally present in rats and only respond to specific designer drugs. They then administered these drugs to either activate or silence the neurons containing those receptors but left the activity of other neurons intact.

They found using this method that activating the connection between the hippocampus and infralimbic cortex in rats, results in a relapse of an extinguished fear memory. If you do the opposite and silence the same pathway, then the relapse of that traumatic memory is prevented.

The team demonstrated that activity of the connection between the hippocampus and the infralimbic cortex is important to cause relapse of traumatic memories and that suppressing this connection can reduce the relapse of memories that had previously been supressed. This important work of the team suggests that hyperactivity of this pathway could be a factor in the case of human patients who have relapses during behavioural therapy. 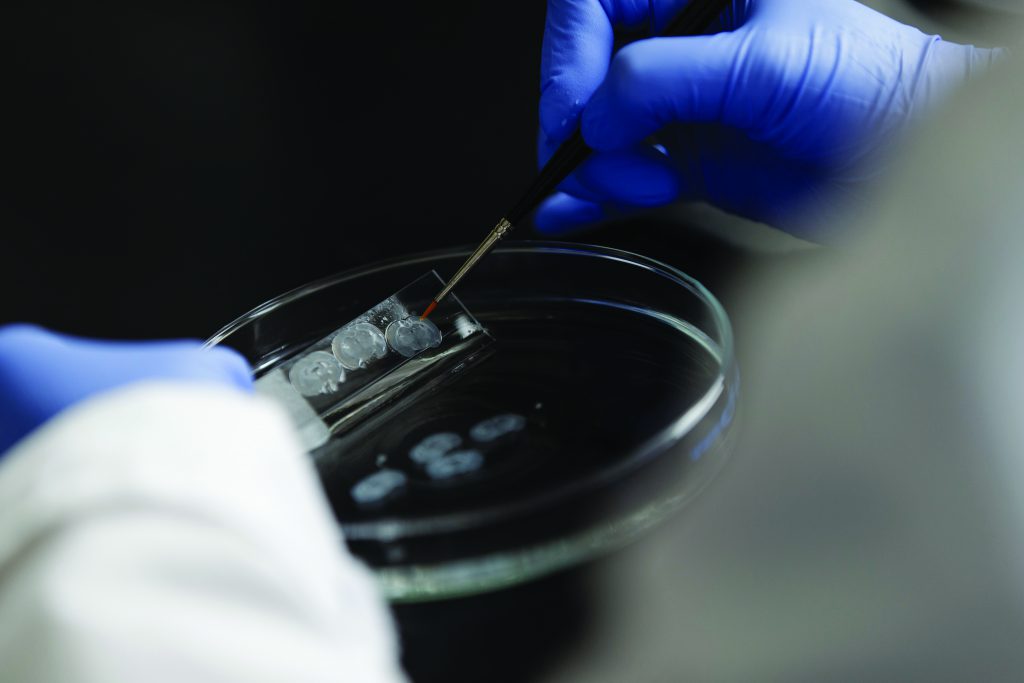 Professor Maren says that another key area of interest for his team is, ‘the deleterious effects of stress on extinction learning.’ Post-traumatic stress disorder (PTSD) is thought to be sustained by impairments in the extinction of traumatic memories. Behavioural therapy is used to try and induce the extinction of those memories in patients. However, if behavioural therapy is carried out too soon after a traumatic event, when stress levels are still high, there is a higher chance that the extinguished fear memories will return.

Norepinepherine or noradrenaline is a hormone present in the body that is produced during periods of stress or in the presence of danger. It primes the body for the ‘fight or flight’ response by increasing heart rate and blood pressure, and in the brain, it induces a state of high alertness and anxiety.

In PTSD, levels of norepinephrine are elevated, and drugs that block the actions of norepinephrine have been beneficial for some PTSD patients. However, it is still not clear how stress is able to alter the extinction of these fearful memories. 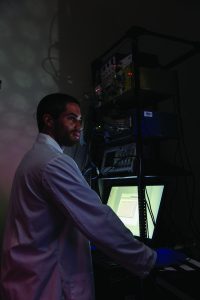 Professor Maren’s team has also investigated what happens to the extinction of fear memories when you block norepinephrine receptors with a drug called propranolol, which is commonly prescribed for hypertension. If you induce a fear memory in rats, there is a period of time of around 30 minutes when it is difficult to induce the extinction of that fear memory. This is thought to be because stress levels are still high from the fearful experience, as in humans undertaking behavioural therapy soon after trauma.

The team found that administering propranolol made it easier to induce the extinction of that fear memory during those 30 minutes, but not after a longer delay. They revealed that the effect of stress to impair the extinction of fearful memories is due to elevated norepinephrine levels and can be reduced by propranolol. Importantly, the team also carried out control experiments to check that it was a fear extinction process that was taking place and that propranolol did not affect memory in general.

Professor Maren and his team also investigated the brain regions that might be responsible for this effect of stress on fear extinction. They found that the activity of neurons in the infralimbic cortex is changed following the learning of a fear memory and the observed changes in brain activity could be stabilised by administering propranolol to the rats.

Despite this, applying the drug to the infralimbic cortex only, using a specific localised injection did not improve the extinction of fear memory. In fact, it was another area, the amygdala, that seemed to be responding to propranolol to improve extinction of fear memories. The amygdala is also involved in the processing of emotion and also receives connections from the infralimbic cortex. 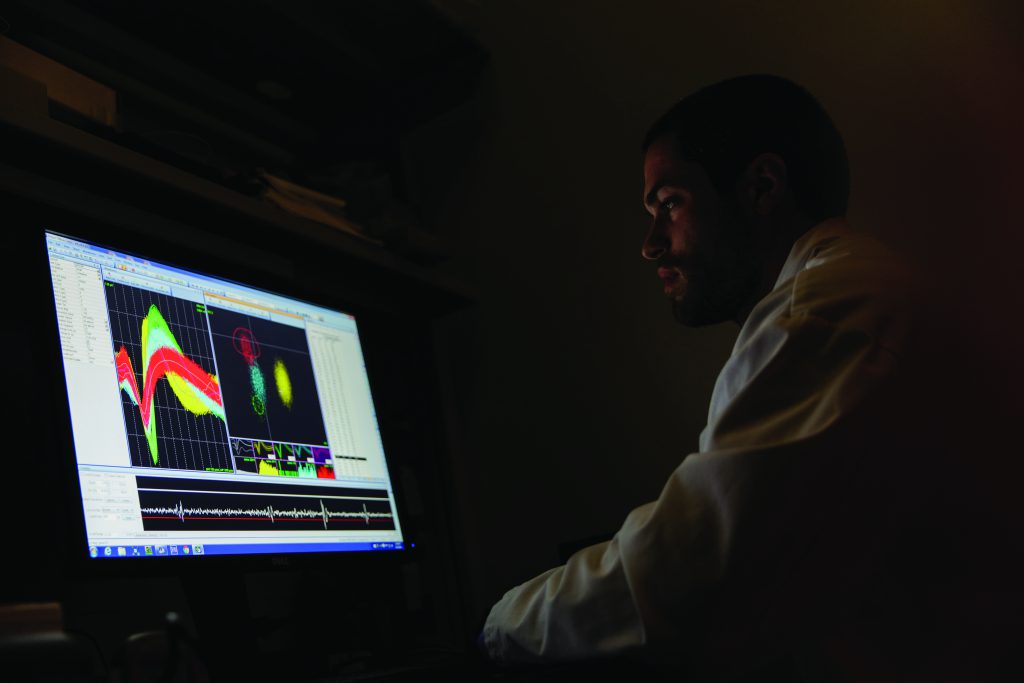 Professor Maren hopes that these new findings will lead to better therapies for people suffering from PTSD and other anxiety- or stress-based illnesses. The team has revealed that the activity of a specific connection in the brain, from the hippocampus to the infralimbic cortex, is important for the pathological relapse of extinguished fear memories. This suggests that drugs could be developed to decrease the activity of this pathway in patients undergoing behavioural therapy to reduce relapses.

Similarly, the identification of an existing drug, propranolol, that can improve the chances of extinguishing a fear memory during periods of stress could help patients who are undertaking behavioural therapy soon after traumatic experiences.

But these therapeutic goals are just the beginning for Professor Maren and his lab: ‘we are now turning our attention to brain circuits that mediate anxiety, a condition that arises when one anticipates that bad events will happen without precisely knowing when or where. We have identified a region of the brain that detects uncertain threats and are attempting to understand the circuit by which this leads to anxiety-like behaviour.’

The team is applying its expertise using the latest research techniques in neuroscience to discover key targets for the treatment of all anxiety disorders, potentially aiding the many people who struggle with these experiences in their daily lives. 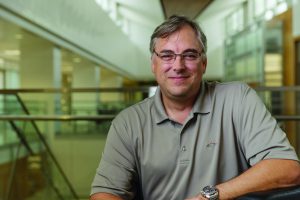 Dr Stephen Maren is a University Distinguished Professor of Psychology and the holder of the Claude H. Everett, Jr. ’47 Chair in Liberal Arts in the Department of Psychological and Brain Sciences at Texas A&M University, USA. He received a BS in Psychology from the University of Illinois, followed by an MS and then a PhD in Biological Sciences (Neurobiology) from the University of Southern California. He has since spent over 20 years conducting research into the neural mechanisms underlying emotional learning and memory in animals, and the relevance of these mechanisms to clinical disorders of fear and anxiety, including post-traumatic stress disorder. Professor Maren’s work has been continuously funded by the National Institutes of Health (NIH) since 1995, to a total of over $9 million, and he is a highly cited and regarded scientist in the field of neuroscience and behaviour. He has received multiple high-profile awards, including the D.O. Hebb Distinguished Scientific Contributions Award from the American Psychological Association, and was made a lifetime Presidential Impact Fellow by Texas A&M University in 2017. He is also the Editor-in-Chief of Behavioural Brain Research, a Scientific Council Member at the Brain and Behaviour Research Foundation and past-president of the Pavlovian Society.

JM Moscarello and S Maren, Flexibility in the face of fear: Hippocampal-prefrontal regulation of fear and avoidance, Current Opinion in Behavioral Sciences, 2018, 19, 44–49. 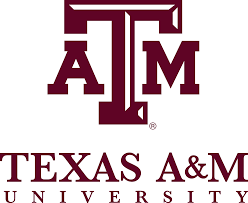