Professor Thomas Albrecht-Schmitt – The Exotic Chemistry of the Heaviest Elements

Relatively little is known about the chemical reactivity of radioactive elements, as using them in the lab requires heroic efforts. However, Professor Thomas Albrecht-Schmitt and his group at Florida State University have successfully been able to investigate the chemical bonding and structure of molecules containing radioactive elements such as plutonium and californium, providing important insight into their chemistry. These investigations could be an important step in designing compounds to help clean up nuclear waste.

Today, the Periodic Table contains 118 confirmed elements, organised by the number of protons each element has. The table is then divided into groups, where elements in the same group typically exhibit similar chemical reactivity. For example, Group 18 – a column in the table that contains elements including helium, neon and argon – is nicknamed the ‘noble gases’ group, as all of the elements in this category are unreactive, colourless gases.

The rows of the Periodic Table are known as chemical series, and there are two chemical series that are separated from the main bulk of the Periodic Table. These are the lanthanide series and the actinide series, home to the heaviest elements of the Periodic Table and including uranium, neodymium and plutonium. Although they are perhaps not the most well-known of the chemical elements, naturally-occurring lanthanide elements are surprisingly common in every-day life. Every smartphone contains a number of different lanthanide elements, which are also known as rare earth metals. Examples include terbium and dysprosium – both of which are important in the colour displays of a smartphone.

Relatively little is known about how both the lanthanides and actinides react with other elements and molecules, particularly as their radioactive nature makes them incredibly difficult to work with. Without this knowledge, it is very difficult to devise ways to trap and remove radioactive lanthanides and actinides from nuclear waste. However, Professor Thomas Albrecht-Schmitt and his research group at Florida State University are uniquely equipped to apply conventional investigative chemical tools to these heavy elements, and provide some of the first insights into the chemistry of one of the most exotic regions of the Periodic Table.

‘What makes this discovery so interesting is that the material – rather than being really complicated and really exotic – is really, really simple. Your imagination goes wild, and you think “Wow, I could make that class of compound with many other types of heavy elements”.’ 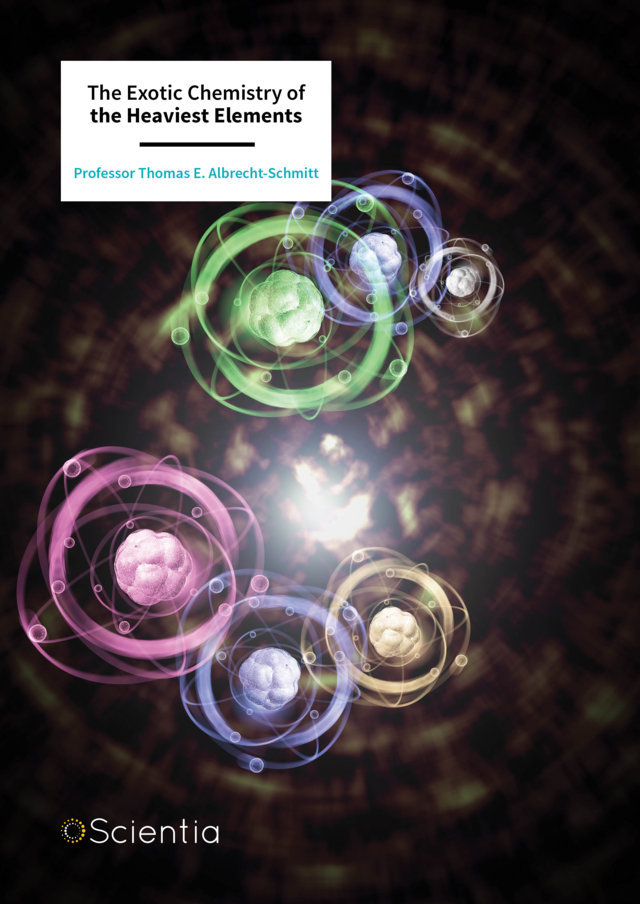 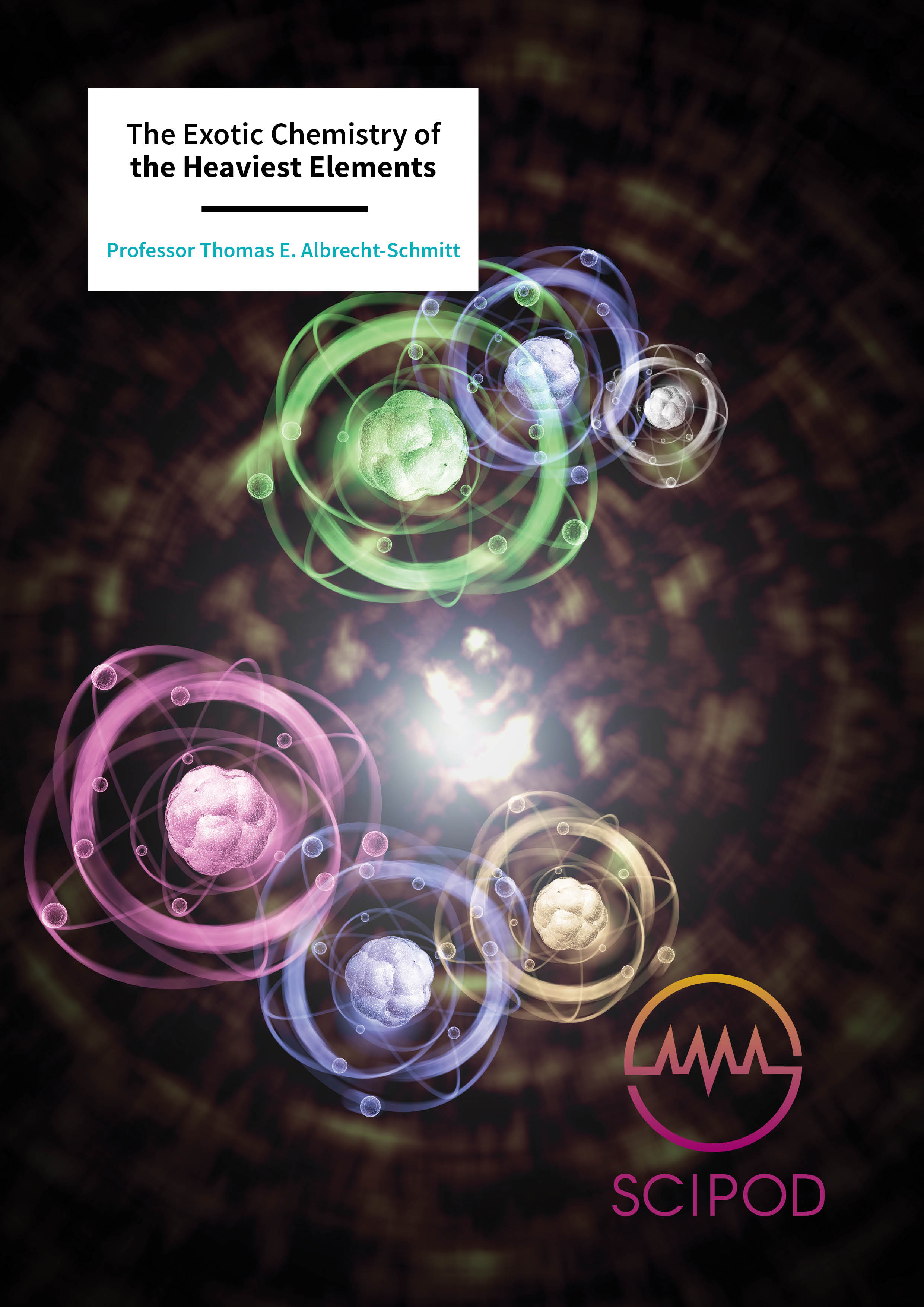 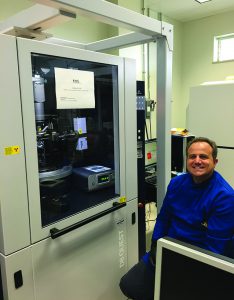 Professor Albrecht-Schmitt and his team are experts in investigating the chemistry and bonding of the actinides. They are working at one of the few research institutes in the world where scientists can use sufficiently large amounts of these radioactive elements to synthesise new molecules from them, and probe their properties.

To investigate the electronic structure and reactivity of such elements, Professor Albrecht-Schmitt and his group use a huge variety of both experimental and theoretical methods. Previously, they have focused their attention on understanding the chemical bonding in californium borate, one of the very few molecules containing californium that has been created to date. This molecule (or ‘compound’) is an excellent model for understanding the similarities and differences between the actinides.

As californium is not a naturally occurring actinide, there are only very small amounts of it in existence. However, the results obtained by Professor Albrecht-Schmitt’s team during their californium borate experiments were truly surprising and remarkable. By using common chemical structure identification techniques, such as crystallography, they were able to deduce the arrangement of the atoms in the compound. Also, using a series of spectroscopic tools, such as UV-vis absorption spectroscopy, along with computational simulations, the team found that californium atoms were bonded to oxygen atoms in a way that was far more similar to the type of bonding seen in molecules containing transition metals (a group containing iron, cobalt, gold and lead). It was highly unusual to find an actinide element exhibiting this type of chemical bonding.

Previously, it had been assumed that there would be a great deal of similarity in how all of the actinides bonded, as is the case for most other regions of the Periodic Table. However, in the team’s compound, not only was californium bonding in a way that was completely different to what had been seen in other actinides, such as plutonium, americium and curium, but the compound also shown to be highly resistant to radiation damage, making it a possible candidate for use as a nuclear waste storage material.

The team also performed studies using similar techniques on similar compounds called berkelium dipicolinate and berkelium borate. Although there are some similarities between the structures of californium borate and berkelium borate, the team showed how berkelium’s electronic properties, which determine how the element will react, are much more similar to that of the lighter actinides than its nearest neighbour, californium. This was yet another surprising observation in this strange region of the Periodic Table. 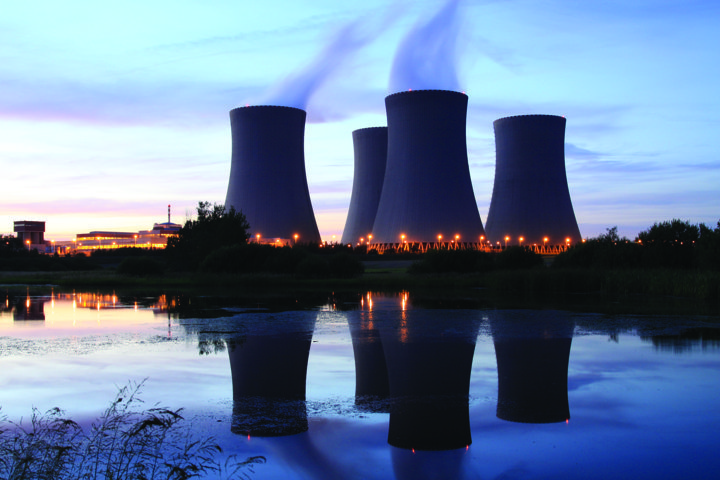 Illuminating the electronic structure and bonding of these heavy element compounds has another implication for making our nuclear energy safer – it can help us to devise ways to trap and remove these types of compounds from our nuclear waste. Towards this goal, Professor Albrecht-Schmitt and his team have been investigating compounds containing plutonium – a common component of nuclear waste. This project has been supported by a grant from the Department of Energy to form a new Energy Frontier Research Center that will focus on accelerating scientific efforts to clean up nuclear waste.

With a rising global population, it is proving challenging to find viable approaches to meeting our increasing energy needs while also considering the disastrous environmental impact of many energy sources, such as fossil fuels. While renewable energy sources such as wind and solar power are very attractive options for future investment, such methods cannot always meet our energy demands around the clock. Nuclear power offers an attractive addition to this, as it provides a continuous energy source. However, one of its most serious long-term downsides is the resulting nuclear waste, which can continue to emit significant levels of radiation for thousands of years.

The problem with radioactive waste is twofold. While the radioactive decay of a single atom may be relatively well understood, the chemistry of the complex ‘chemical soup’ that is nuclear waste poses a far greater challenge. The composition of the waste also evolves over time, with different elements and compounds having different lifetimes. Professor Albrecht-Schmitt and his team hope that their research will lead to the development of new methods for separating different radioactive elements, helping with the capture, clean up and recycling of nuclear waste.

The Secret Life of Plutonium

To gain a deeper understanding of the how radioactive elements might behave in nuclear waste, the team created a plutonium compound – what they call a ‘plutonium-organic hybrid’. ‘In order to develop materials that say trap plutonium, you first have to understand at the most basic level, the electronic properties of plutonium,’ Professor Albrecht-Schmitt explains. ‘So that means making very simple compounds, characterising them in exquisite detail and understanding both experimentally and theoretically all of the properties you’re observing.’

Using a similar arsenal of techniques to their previous studies on californium borate, Professor Albrecht-Schmitt and his team discovered that an electron was able to hop between two plutonium atoms in their plutonium-organic hybrid compound. This type of electron motion, which is very common in transition metal compounds, had never been observed in a plutonium compound. 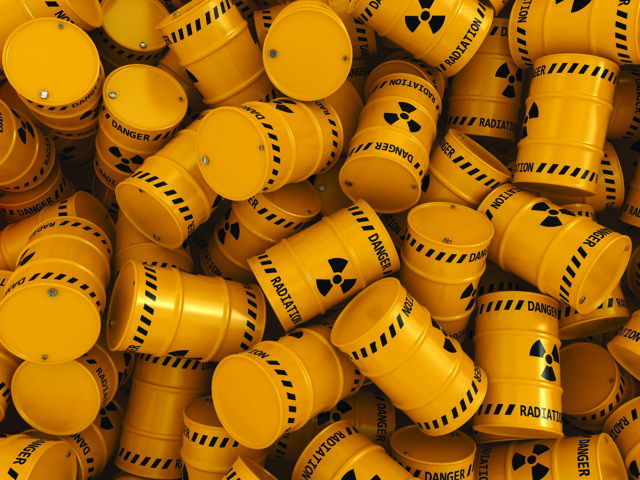 Before they had even analysed the compound, the team knew that it would have unique electronic behaviour because of its unusual brown colour. ‘Plutonium makes wild, vibrant colours. It can be purple, it can be these beautiful pinks. It can be this super dark black-blue,’ Professor Albrecht-Schmitt explains. ‘This compound was brown, like a beautiful brown chocolate bar. When we saw that colour, we knew something was electronically unusual about it.’

When the negatively-charged electrons shuttle between the plutonium atoms in the compound, the total amount of charge on each atom changes. This charge on each plutonium atom is what’s known as its ‘oxidation number’ and this strongly determines its chemical behaviour. ‘What makes this discovery so interesting is that the material – rather than being really complicated and really exotic – is really, really simple,’ says Professor Albrecht-Schmitt. ‘Your imagination goes wild, and you think “Wow, I could make that class of compound with many other types of heavy elements”.’

The team’s discovery deeply increases our understanding of plutonium’s chemical behaviour, challenging all previous assumptions about the element. In the future, this information will be invaluable for figuring out efficient ways to trap and remove this dangerous element from nuclear waste.

Professor Albrecht-Schmitt is the director of the Center for Actinide Science and Technology (CAST) at Florida State University that is dedicated to bringing together interdisciplinary teams from across the sciences to pioneer new ways of understanding some of the most challenging chemistry in the Periodic Table. Already, the work being done here has revealed invaluable information about behaviour and bonding in actinide elements, challenging many previous assumptions. From designing safer waste materials, to creating compounds that can trap and remove hazardous radioactive elements, their work is contributing to a future of safer nuclear energy. 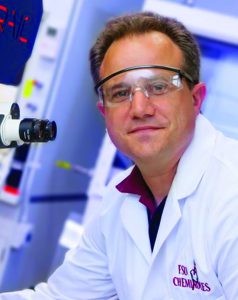 Professor Thomas Albrecht-Schmitt holds the Gregory R. Choppin Chair in Chemistry at Florida State University and is the director of the Center for Actinide Science and Technology (CAST), a Department of Energy, Energy Frontier Research Center – a collaboration between seven universities and national laboratories in the US dedicated to actinide chemistry, materials, and physics. He completed his BSc at Southwest Minnesota State University, before pursuing both his MSc and PhD at Northwestern University, which he completed in 1997. His current research interests are focused on the synthesis, structure elucidation, spectroscopy, and structure-property correlations in heavy element materials.

US Department of Energy