Histones form the bulk of the protein component of chromatin – a complex of macromolecules found in cells, consisting of DNA, RNA and protein. Originally, histones were thought to be only involved in packing chromosomal DNA in eukaryotic cells, but now, they are clearly also important players in regulating gene expression. After histones are translated and incorporated into the chromosome, they can be considerably modified, and it is these modifications that play an important role in regulating gene expression. In metazoans – or animals – a family of replication-dependent histone genes encodes a majority of the histone proteins, which are classified as canonical histone proteins.

Histone proteins come together in a coordinated fashion to bind DNA to form chromatin. The genes H2A, H2B, H3 and H4 encode histone proteins that make up the nucleosome, while the H1 histones are bound to the linker DNA, found between the nucleosomes. Interestingly, the mRNAs of the canonical histone proteins do not have poly(A) tails – structures important for the nuclear export, translation and stability of all other cellular mRNAs.

Instead, these replication-dependent histone mRNAs have a 3′ stem-loop sequence at their end, which is crucial for their regulation. This 3’ stem-loop sequence is formed by the endonucleolytic cleavage of the pre-mRNA. The stem-loop consists of a 6-base stem and 4 nucleotide loop.

Overall, the 3′ end of canonical histone mRNAs consists of a conserved 25–26 nucleotide sequence, which includes 5 nucleotides before the stem-loop, the 16-nucleotide stem-loop and 4–5 nucleotides after the stem-loop. This sequence is evolutionarily conserved in metazoans with a variety of features that are invariable, including the nucleotides in the stem, in the loop and before the stemloop. Importantly, only one protein, the stem-loop binding protein (SLBP), binds to this 26-nucleotide sequence stem-loop and contributes to all aspects of histone mRNA metabolism. Within SLBP there is a small, 73 amino acid RNA-binding domain (RBD) that is not like the RBD of any other RNA-binding protein. Thus, given that these histone canonical mRNAs do not have the typical 3’ poly(A) tail they require a distinct set of factors for metabolism and regulation. 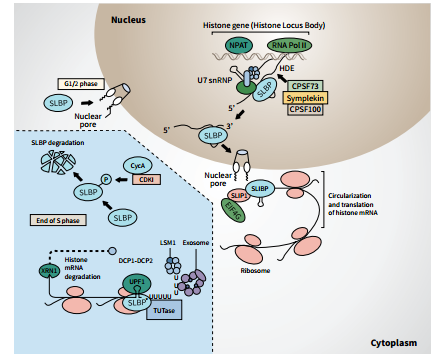 As mentioned above, since they have a unique 3′ end, histone mRNAs require a different set of factors for their synthesis and translation, including the U7 small nuclear RNA (snRNA) and the Sm-like proteins LSm10, LSm11 (components of the U7 snRNP), SLBP and SLBP-interacting protein 1 (SLIP1). In addition, there are some factors of the metabolic machinery involved in histone mRNA metabolism that overlap with mRNAs with poly(A) tails. Thus, the regulation of histone mRNAs is quite complicated and must be conducted in a very efficient manner. There are still many aspects of these processes that have yet to be discovered.

Indeed, this is precisely the interest of Professor William F. Marzluff and his team at the University of North Carolina. His laboratory, together with Professor Schümperli’s lab at the University of Bern, was the first to clone the cDNA for SLBP, which, as mentioned above, binds the 3′ end of histone mRNA and participates in all aspects of histone mRNA metabolism. Professor Marzluff’s lab aims to understand how SLBP carries out its multiple functions, how SLBP itself is regulated and how this regulation is connected with other cell cycle regulators involved in the regulation of histone mRNA. Over the years, he and his colleagues have investigated these questions using mammalian and, together with Professor Robert Duronio, drosophila (fruit fly) models.

As we have discussed, histone mRNAs are unique in that they do not contain poly(A) tails. Given that the poly(A) tail is the main site for mRNA regulation, understanding how histone mRNAs which lack a poly(A) tail are regulated is a unique area of research. A key breakthrough was cloning SLBP. Professor Marzluff and his colleagues used a yeast three-hybrid selection system developed by Professor Marvin Wickens for cloning RNA-binding proteins. They cloned the cDNA for the SLBP from humans and frogs. The mammalian SLBP is a unique 31-kD protein that is unrelated to other proteins in the database and contains a novel 73-aminoacid RNA-binding domain. Professor Marzluff and his group developed antibodies specific for the cloned SLBP, which allowed them to study the function of SLBP. These advances by Professor Marzluff and his team have paved the way for much of the research performed in this field. They demonstrated that SLBP is the major protein that binds the 3’ end of histone mRNA in both the nucleus and the cytoplasm and that it is required for histone pre-mRNA processing. They also showed that SLBP binds to the 3’ stem-loop end of histone mRNA in polyribosomes. Thus, SLBP functions in both the nucleus and the cytoplasm. In addition, SLBP is tightly regulated like histone mRNA, and the SLBP protein is present only in S-phase, indicating that SLBP regulation is an important component of histone mRNA regulation. The discovery of SLBP was of huge significance, as, in Professor Marzluff’s words: ‘this protein is central to everything about histone mRNA metabolism. One of the most exciting days came 17 years after the discovery of SLBP when we first got to see the structure of SLBP bound to the stemloop RNA, as a result of the efforts of Dr Dhazi Wang and Professor Liang Tong (Columbia Univ.) who crystallised the SLBP-RNA complex.’ 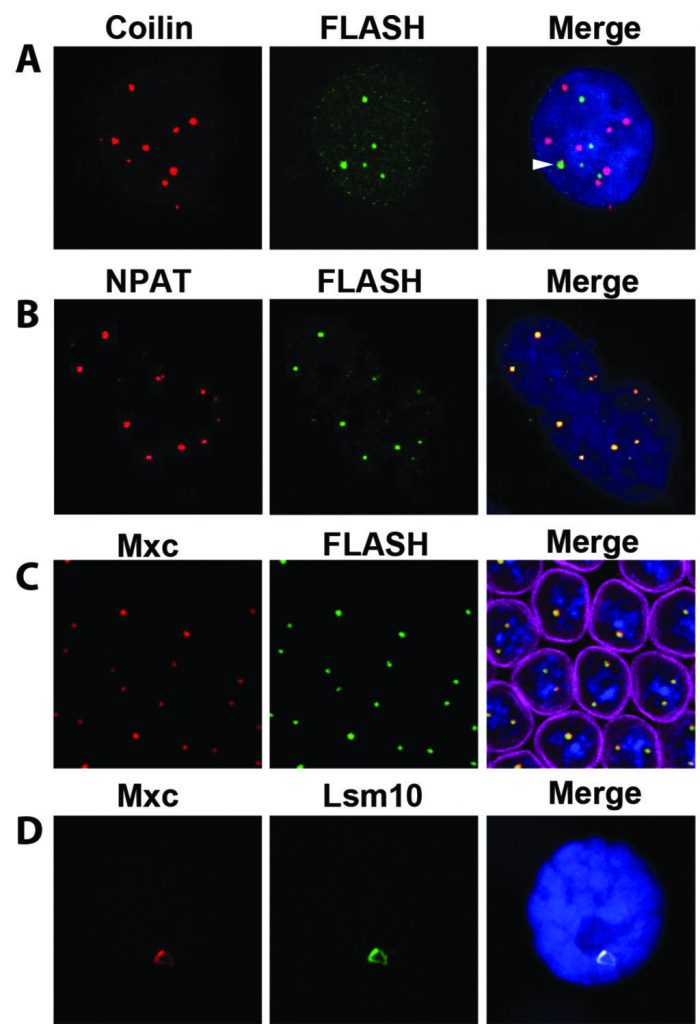 Beyond SLBP in Mammals

The formation of mature mRNAs requires 3’ end processing of nuclear pre-mRNAs. Most pre-mRNAs undergo a cleavage step that is coupled to the addition of the poly(A) tail. In contrast, as Professor Marzluff’s group has shown, the cleavage of metazoan replicationdependent histone pre-mRNAs occurs by a different mechanism, which is not followed by the addition of a poly(A) tail. For histone pre-mRNAs, two sequence elements are required for processing, the stem-loop and the histone downstream element (HDE), and the cleavage occurs between these two elements. The team aimed to identify the mysterious factor directly responsible for cleaving histone pre-mRNAs. In studies led by Professor Zbig Dominski, they identified a protein known as CPSF-73, which also happens to be the enzyme that cleaves all the other pre-mRNAs before polyadenylation. This finding strongly suggested that histone pre-mRNAs, as well as the other pre-mRNAs that undergo cleavage/polyadenylation, utilise the same endonuclease during 3’ end processing. ‘This result meant that there likely were two complexes that contained CPSF-73, one for polyadenylated mRNAs and a second one for histone mRNAs,’ Professor Marzluff explains.

However, the mechanism by which CPSF73 is recruited to histone pre-mRNA was still unknown. One part of the processing complex they thought probably directly or indirectly participates in this process is Lsm11, a component of U7 snRNP. To test this, Professor Marzluff and his colleagues investigated proteins that interact with Lsm11, and discovered that the protein FLASH interacts with the N-terminal region of Lsm11. Previously, FLASH was shown to localise in the vicinity of histone gene loci and had been shown to be required for S phase progression, suggesting that it might play a role in the expression of histone genes. During their investigations, the team, again led by Professor Dominski, revealed that FLASH is an essential factor for 3’ end processing of histone pre-mRNAs. They also demonstrated that this role is conserved between vertebrates and invertebrates. FLASH is central in the processing complex because together with Lsm11 it recruits and/ or activates CPSF-73. It may also play a vital role in integrating the expression of histone genes with other cellular events, including cell cycle progression and apoptosis. This finding was the breakthrough that allowed Professor Marzluff and his team to go on to identify the histone cleavage machinery. 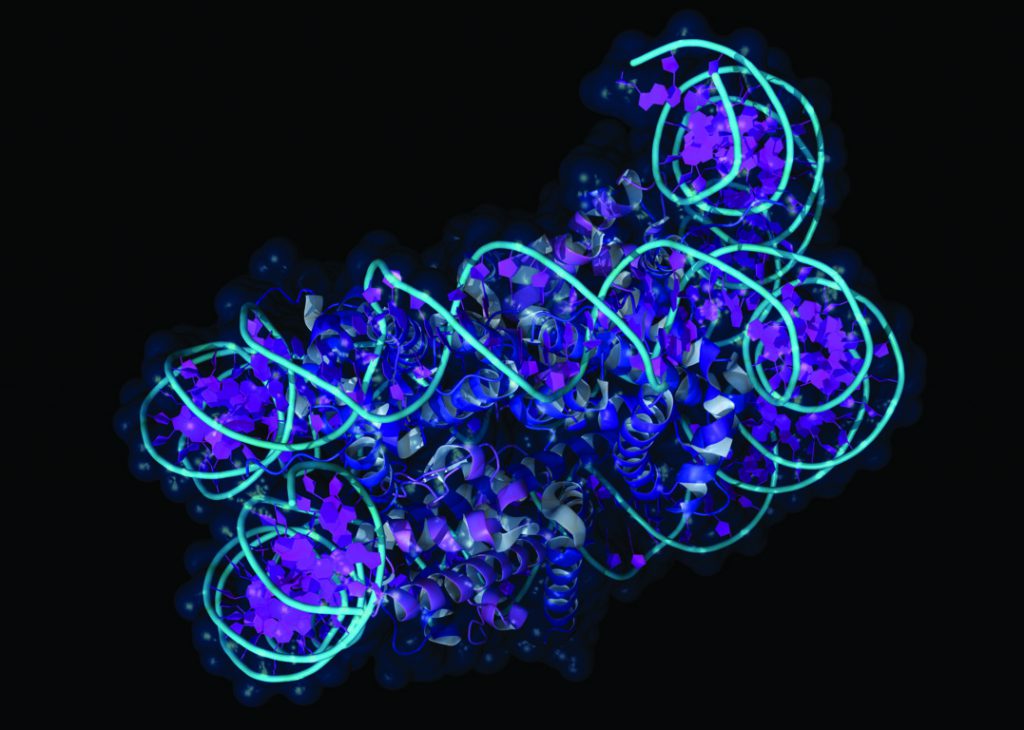 Professor Marzluff and his colleagues defined a sub-complex of poly(A) factors that are necessary for histone pre-mRNA processing. These factors are present in a stable complex and interact with histone-specific processing factors. The results from this study suggest that there is a common core cleavage factor that is required for processing of histone and polyadenylated pre-mRNAs.

At the same time that Professor Marzluff and his colleagues were investigating the role of SLBP and other histone mRNA regulators in mammalian cells, they also investigated the function of these proteins genetically over the past 15 years in collaboration with Professor Duronio, using Drosophila as a model system. To examine the function of SLBP genetically, Professor Marzluff and his team cloned the gene encoding Drosophila SLBP (dSLBP) and isolated flies with mutants in the SLBP gene. They found that each of the Drosophila histone genes possessed a poly(A) site just after the histone stem-loop, which allowed the flies to produce polyadenylated histone mRNA. These cells were viable, but the flies did not develop into adults. This finding allowed the team to undertake numerous genetic studies on histone gene expression.

While metazoan histone mRNAs are unique because their pre-mRNAs contain no introns, and the mRNAs possess a conserved stemloop structure instead of poly(A) tails, in Drosophila there are canonical poly(A) signals located downstream of the normal cleavage site of each histone gene. These signals are employed when histone 3’ end formation is inhibited.

Histone mRNAs are synthesised in a distinct subcompartment of the nucleus, termed the histone locus body (HLB), that concentrates many of the factors that are required for histone mRNA biosynthesis. As mentioned above, the protein FLASH and U7 snRNP are components of the HLB that participate in 3′ processing of the nonpolyadenylated histone mRNAs by recruiting the endonuclease CPSF-73 to the histone pre-mRNA. Together with Professor Duronio they further examined this process in Drosophila using transgenes to complement a FLASH mutant. These studies revealed that unique domains of FLASH involved in U7 snRNP binding, histone pre-mRNA cleavage and HLB localisation are all required in vivo for proper FLASH function. In addition, the genetic manipulation of the HLB composition using mutations in FLASH revealed that mutations in the HLB assembly factor Mxc lead to the failure to concentrate FLASH and/or U7 snRNP in the HLB and impaired histone pre-mRNA processing. This malfunction leads to the accumulation of small amounts of polyadenylated histone mRNA and nascent read-through transcripts at the histone locus. Ultimately, these findings demonstrate that HLB concentrates FLASH and U7 snRNP to support efficient histone mRNA biosynthesis and unveil the coupling of 3′ end processing with transcription termination.

Professor Marzluff and his colleagues have been investigating the regulation of histone mRNAs since the early 1980s. Through the years, as described above, they have made critical discoveries on how histone mRNAs are regulated throughout the cell cycle. Professor Marzluff alludes to the fact that these discoveries have not come easily: ‘We were stuck on some things for 20 years before being able to figure it out – this encourages people to be persistent.’ The large number of talented students and postdoctoral fellows who not only carried out the experiments, but often made the key insights that resulted in novel discoveries, deserve credit for much of the work. Indeed, their persistence continues, as his lab focuses on all aspects of histone mRNA metabolism using a combination of biochemical, molecular biological and genetic approaches. 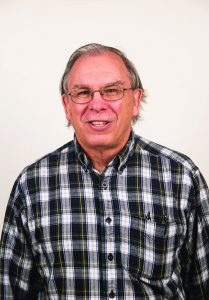 Professor William Marzluff first started his research into biochemistry and gene regulation during the final year of his undergraduate degree at Harvard University. After this, he went on to receive a Ph.D. in 1971 from Duke University for a thesis entitled ‘Species Specificity of Histone Acetylation’. Following his postdoctoral training at Johns Hopkins University, in 1974 he took a position in the Biochemistry Division in the Department of Chemistry at Florida State University. Professor Marzluff then moved to the University of North Carolina in 1991, where he headed a Molecular Biology program that was a collaboration between the College of Arts and Sciences and the School of Medicine. Here, he also served 13 years as Associate Dean for Research in the School of Medicine. During Professor Marzluff’s undergraduate, graduate and postdoctoral training, he was also an avid rugby player, first for Harvard’s team, then Duke’s and finally for the City of Baltimore as a postdoctoral researcher.