Increasing global temperatures have led to a worldwide increase in atmospheric water vapour. Paradoxically, this is correlated with an  increase in the severity of wildfires and droughts. Research by Professor William Lau and his colleagues at the Earth System Science Interdisciplinary Center, using a combination of satellite data analysis and atmospheric modelling, is trying to find out if global warming  means worsening wildfire events.

It is easy to see how dry, dense woodland leads to runaway wildfires. A single spark from an ignition source, be it arson or lightning, and kilometres of woodland can be up in flames, often in a matter of minutes. Windy weather conditions can quickly fan these flames further, damaging property and wildlife habitats alike. The year 2015 saw 10.1 million acres of woodland burnt across the United States with a firefighting bill of $2.6 billion.

With prolonged droughts in the western and south western United States, there has been a huge increase in both the severity and frequency of wildfires. The burned acreage in 2015 was the largest scale destruction seen since records began and the low levels of soil and plant moisture, symptomatic of drought conditions, provide the perfect kindling for rampant blazes.

The bad news doesn’t end there. Although the human and economic cost of wildfires may be obvious, wildfires pose an even more dangerous threat to the environment in terms of their contribution to global warming. When the trees burn down, there is not just the initial release of carbon dioxide and other greenhouse gases, but the destruction of forests means there are fewer trees to act as ‘carbon sinks’ to remove the excess carbon dioxide from the atmosphere. This leads to a vicious feedback loop, fuelling further environmental problems.

Given the severity of current wildfires and the grim predictions about the likelihood of future extreme weather events, it is imperative that we not only understand what causes wildfires but also learn how to predict when and where they might occur.

Firefighting and wildfire prevention efforts are largely dependent on meteorological data. However, the relationship between environmental conditions and the likelihood of wildfires is not as straightforward as it might seem. After all, not all droughts lead to the devastating fires seen in recent years and in fact, the increase of wildfires with rising global temperatures is actually something of a surprise.

This is because higher temperatures allow the atmosphere to hold more water vapour, meaning we should be seeing more of the humid conditions that are unfavourable for wildfire spreading. However, Professor William Lau at the Earth System Science Interdisciplinary Center states that ‘we find that under greenhouse warming, the world is actually getting “relatively” drier’, despite this increase in global water vapour levels.

Understanding this paradox is what has motivated Professor Lau’s research looking at whether the increasing severity and frequency of wildfires can be predicted. 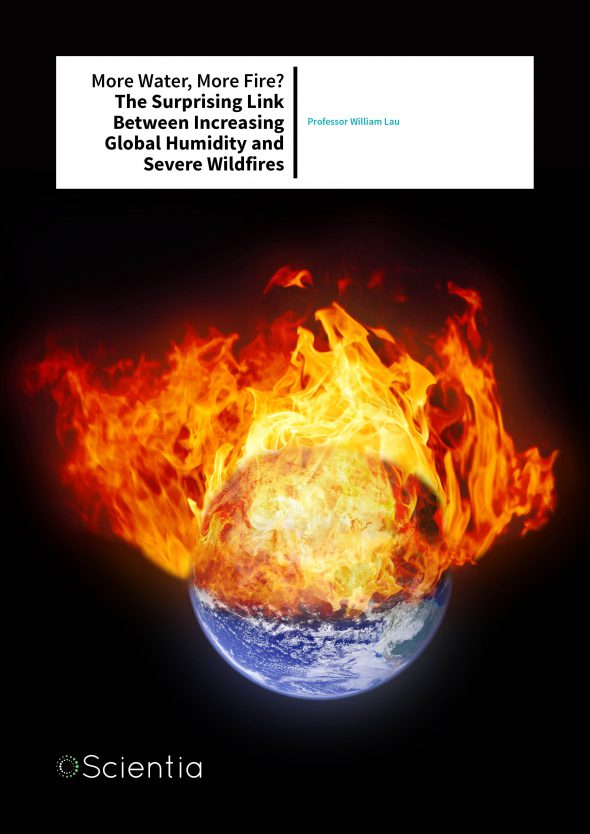 ‘There is no doubt that we are living now in a warmer and wetter world under the effect of greenhouse warming. Therefore, it is perplexing that we are now seeing even more severe wildfires occurring around the world.’ 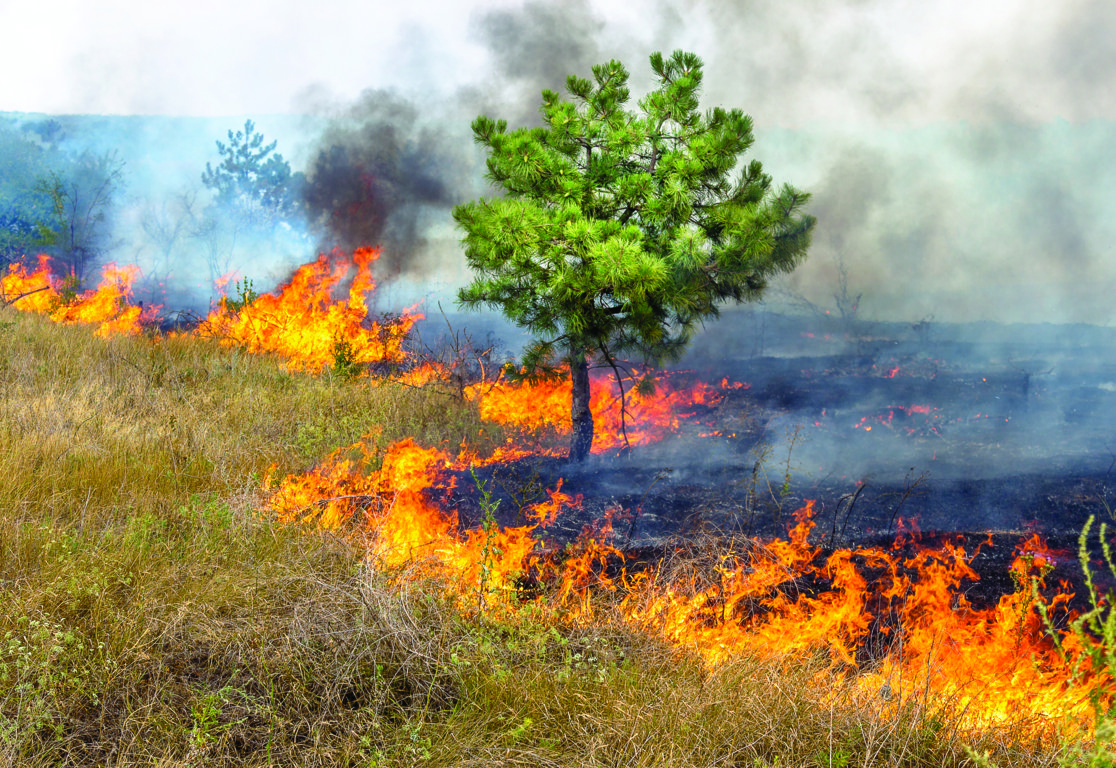 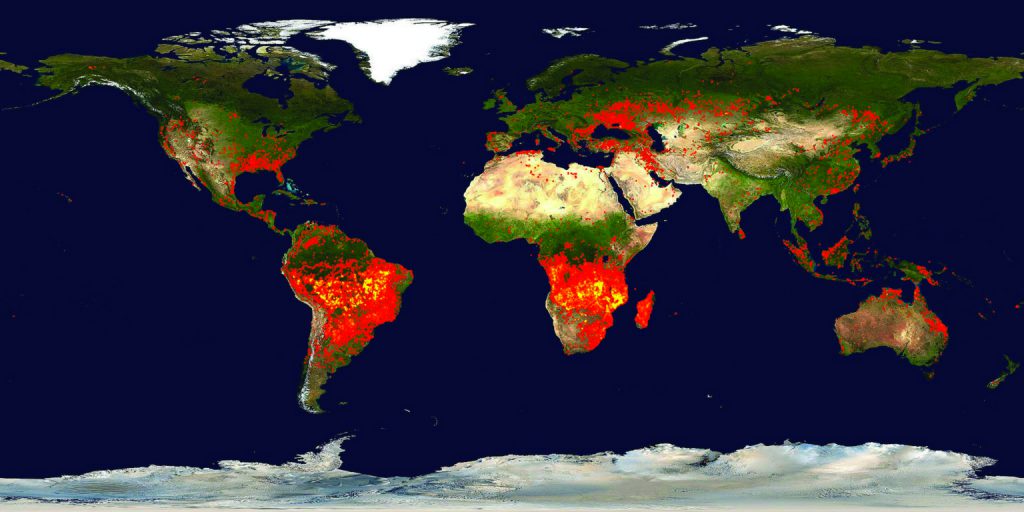 Global Dryness and the Hadley Circulation

Why is it then that, despite there being more water vapour overall in the atmosphere, the world is becoming ‘relatively drier’? The answer lies in some of Professor Lau’s work looking at something known as the Hadley Circulation (HC).

HC is a gigantic overturning motion in the atmosphere that connects the tropics and the extratropics. In the ascending branch of the HC near the equator, warm, moist air rises, travels poleward at the upper troposphere, and then cools and sinks down to the surface at the subtropics and midlatitudes in the northern and southern hemispheres. The rising air at the equator leaves a region of low pressure there, whereas the cooler, drier air to the north creates a higher-pressure region as it sinks. Near the earth surface, the sinking air flows towards the equator, completing the circulation.

The impact of the HC is massive. It influences the global distribution of rainfall, clouds and relative humidity, and is responsible for the global weather and climate. Using computational modelling, Professor Lau has shown that carbon dioxide warming has led to the weakening and strengthening of components of the HC, in association with an overall reduction of tropospheric relative humidity. This leads to ‘tropospheric dryness’ that manifests as an increased risk of droughts in tropical and subtropical land regions, but also increased rainfall in equatorial regions.

The change in the HC is why certain parts of the world that are warming fastest are actually becoming ‘relatively drier’, despite an overall global increase in abundance of water vapour. Most worryingly, Professor Lau’s work predicts that under global warming, the HC will continue to intensify, and the areas of subsidence, which co-locate with the world’s deserts and semi-arid zones will continue to expand as the climate becomes even warmer. This could mean more widespread droughts and, potentially, the associated menace of wildfires.
Most atmospheric phenomena are governed by these very complex and delicate feedback loops. Understanding the HC and its interactions with the regional weather and climate systems of the world, is an important part of predicting weather fluctuations and climate change. 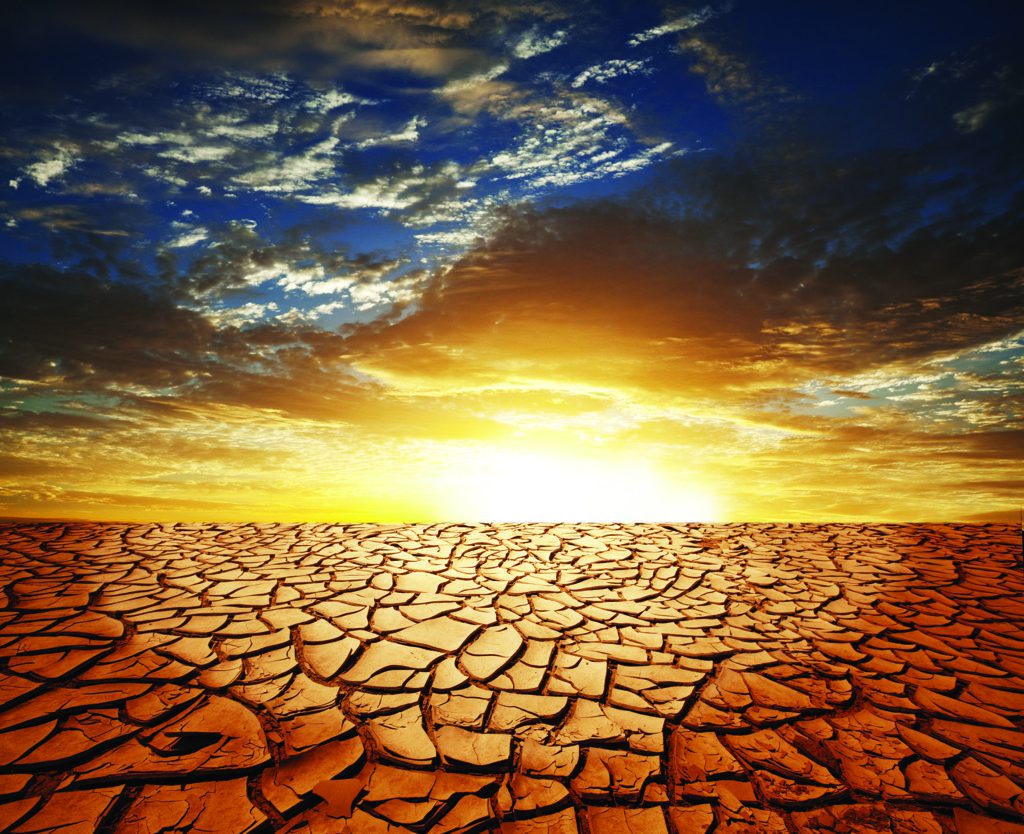 The challenges for researchers like Professor Lau and his colleagues are how to make those models accurate and useful. Models are validated by comparing their simulations with observed data from past events. This might include data collected from sources such as weather stations, and satellites. The simulations are then projected into the future based on a number of different environmental scenarios, for example, keeping emissions of greenhouse gases and/ or air pollution aerosols at pre-industrial levels, at present levels, or reducing according to prescribed rates.

In his previous research, Professor Lau, was able to show ‘that there is predictability of precipitation events over the US on seasonal time scales’, through using a data analysis methodology called Empirical Canonical Correlation Analysis (ECCA). In the present research, he and his team plan to use ECCA to identify variability and trends in the statistics, i.e., frequency, duration, and spatial coverage, for ‘no-rain’ situations, as a starting point for predicting wildfires. They will then seek the relationships of these statistics with a range of factors related to wildfires, such as flammability, fire fuel supply and surface vegetation characteristics in the regions of interest. Next, they will use climate modeling to see if the model can replicate the statistics. Because climate models have a complete set of physical variables for rainfall and wildfires, which observations lack, model simulation can help to better understand the physical ‘feedback loop’ underlying wildfires.

Finally, they plan to conduct numerical experiments under different emission scenarios, to examine possible trends in the no-rain statistics and related wildfires parameters. Being able to identify and predict trends in no-rain statistics is not just another way of making a weather forecasting more accurate, but can help us understand how physical processes related to wildfires are likely to be affected by changing conditions such as global warming.

What Professor Lau’s team are now hoping to do is find ways of better predicting exactly how changes in environmental factors, like the HC, can impact wildfire frequency and severity. At present, although some of the factors that can contribute to the likelihood of wildfires are known, there are no robust ‘environmental indicators’ that can be used to accurately predict the occurrence or size of wildfire events.

By bringing together experts in atmospheric data analysis and modelling, Professor Lau’s team are hoping to explore the relationship between elements of the atmospheric water cycle, such as temperature, rainfall, moisture level and winds, and wildfire characteristics. Lack of rainfall, and low relative humidity conditions lead to increased surface evaporation, and drier soil. Drier soil has a lower heat capacity and therefore can heat up more quickly. Higher air temperature increases evapotranspiration from vegetation and tree leaves, causing them to dry. Drier leaves increase fire flammability and provide more fire fuels. Hence, a warmer climate, reduced tropospheric humidity, decreased soil wetness and drier tree leaves, together with favourable meteorological conditions, such as strong wind, can contribute to a feedback loop that leads to more intense and widespread wildfires.

This is an immensely complex project, requiring the analysis of voluminous data from space and ground based observations, computer modelling and empirical data analysis, in order to make meaningful predictions about the behaviour of wildfires. Professor Lau, with over three decades of experience working at NASA looking at the impact of changes in atmospheric circulation on the Earth’s water cycles, is uniquely qualified to bring together a wide range of experts to take a truly cross-disciplinary scientific approach to solving this problem.

Despite the associated contribution to greenhouse gas emissions and potential human destruction they can wreak, wildfires are not wholly bad and destructive events. Many plants rely on them to reproduce as the fires break open seed cases and break down organic matter to make nutrient-rich seedbeds for further growth. For areas where wildfires seem to occur almost seasonally, they are thought to contribute to biodiversity in the region. However, Professor Lau’s research will help to assess the risk of destructive wildfires due to climate change relative to the ‘natural’ levels of wildfire events that sustain forest regrowth.

The current global temperature increases alone do not explain the increase in the frequency and severity of observed wildfire events in North America, which is where wildfires occur most frequently. Given that global warming does not just mean rising temperatures, but complex changes in surface humidity, seasonal cycles and physical weather such as wind conditions, the potential impacts of further global warming on wildfire frequency is not well understood. Professor Lau and his team at the Earth System Science Interdisciplinary Center are hoping to improve not just our understanding of how all these factors influence wildfire frequency, intensity and spread, but to find some type of ‘environmental signal’ that will mean that we are able to predict wildfire occurrence in North America on seasonal-tointerannual and longer timescales.

Although Professor Lau’s research to date has focused on North America, he hopes to extend this work to examine wildfire-climate relationships and predictability across other regions in the world. Given the expectation that the droughts across large parts of North America are likely to worsen in the future and global temperatures will continue to rise, being able to predict potential locations and the severity of wildfires is essential for developing more effective prevention methods in the future. Preventing wildfires might not just be an issue of saving firefighting costs but also of limiting the potential damage of another contributing factor to global warming. 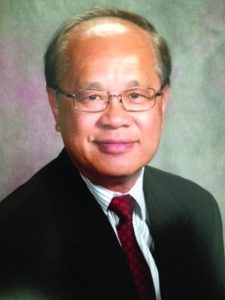 Professor William Lau is a senior research scientist at ESSIC, and Adjunct Professor of the Department of Atmospheric and Oceanic Sciences, University of Maryland. He received his PhD in Atmospheric Sciences from the University of Washington, Seattle in 1977. After graduation, he was Assistant Professor at the Naval Postgraduate School before joining the NASA Goddard Space Flight Center in 1981. There, he served as the Head of the Climate and Radiation Branch, Chief of the Atmosphere Laboratory, and the Deputy Director for Science, Earth Science Division, NASA/GSFC. Professor Lau has been recognised for both his research and scientific leadership with the American Meteorological Society Meisinger Award for young scientist (1988), the NASA John Lindsay Award (1987), the Goddard Exceptional Achievement Medal (1991), the William Nordberg Award in Earth Science (1999), Distinguished Lecturer, Peking University (2016), Axford Lecturer, Asia Oceania and Geoscience Society (2017), and many others. He is a fellow of the American Meteorological Society and a fellow of the American Geophysical Union, and also served as the President of the Atmosphere Section, American Geophysical Union. Alongside these, he has served on numerous international science steering groups and expert panels on climate research.

MM Fauria and EA Johnson, Climate and wildfires in the North American boreal forest, Philosophical Transactions of the Royal Society B, 2008, 363, 2317–2329.