In the wake of a terrible E. coli food poisoning outbreak, a group of food scientists decided to gear their research towards improving the safety of meat and poultry, whilst reaching out to food industry stakeholders and forming a collaboration known as the Consortium of Food Process Validation Experts (CFPVE). As part of this important collaboration, CFPVE scientists are advocating the use of non-pathogenic bacterial substitutes for process validation in processing plant environments.

One of the most infamous cases of food poisoning in modern times was an outbreak of E. coli in undercooked hamburgers served at Jack-in-the-Box restaurants in 1993. The undercooked beef patties were sold in 73 Jack-in-the-Box restaurants, and 732 people were infected, the majority of whom were under 10 years old. Tragically, four children died and 178 other victims were left with permanent injuries, including brain and kidney damage. It was determined that high demand for a promotional sandwich had overwhelmed local restaurants, which were required by Washington state law to cook burgers to 155°F (68°C), an end-point temperature that would have probably prevented the outbreak, but instead adhered to an outdated federal standard of 140°F (60°C). Moreover, an investigation identified six slaughterhouses in the US and Canada as the ‘likely sources of the contaminated lots of meat’. In February 1998, Jack-in-the-Box’s holding company, Foodmaker, agreed to accept $58.5 million from Vons and eight other beef suppliers to settle the lawsuit filed in 1993.

While this was by no means the first such case, this was different because it had exposed deep issues in the meat supply chain that needed to be resolved. It was clear that food safety required a higher priority. While some argued that the responses of the industry and regulators were ‘too little, too late’, the tragedy did cause the beef industry to shift its focus from shelf-life to safety.

In the wake of this outbreak, food microbiologists from various US institutions – including Texas A&M, Iowa State, Pennsylvania State, Texas Tech, Oklahoma State, Kansas State, Colorado State, University of Georgia, University of Arkansas, University of Wisconsin-Madison and the USDA-ARS – geared their research interests toward developing pathogen interventions that could be applied in food processing. A need for proving effectiveness of implemented interventions led these scientists to promote a more robust and scientific approach to validation of meat manufacturing processes. Their efforts eventually led to the creation of the Consortium of Food Process Validation Experts (CFPVE).

With the introduction of the new Preventive Controls for Human food (FSMA-PCHF), there is an increasing need for assistance amongst processors. Similarly, consumption of meat in the US and across the developed world is rapidly increasing, and the need for robust food safety validation has never been greater. There are about 9.4 million cases of illnesses caused by foodborne pathogens in the US every year, with the leading causes being norovirus (roughly half of the illnesses), and bacterial pathogens such as Salmonella, Shiga toxin-producing E. coli (STEC), Clostridium perfringens. Listeria monocytogenes and Campylobacter contributing to the total.

The pathogenic bacterium behind the infamous Jack-in-the-Box outbreak was the deadly E. coli O157:H7 strain, which is a major cause of food-borne illness worldwide. Infection with O157:H7 can lead to bloody diarrhoea and even kidney failure, and young children and the elderly are particularly susceptible. In 1994, in the wake of the Jack-in-the-Box outbreak, the US Department of Agriculture, Food Safety and Inspection Service (FSIS) banned the sale of ground beef contaminated with the strain. In the US, in addition to the O157:H7 serotype of E. coli, there are six additional regulated serotypes of STEC banned in meat. 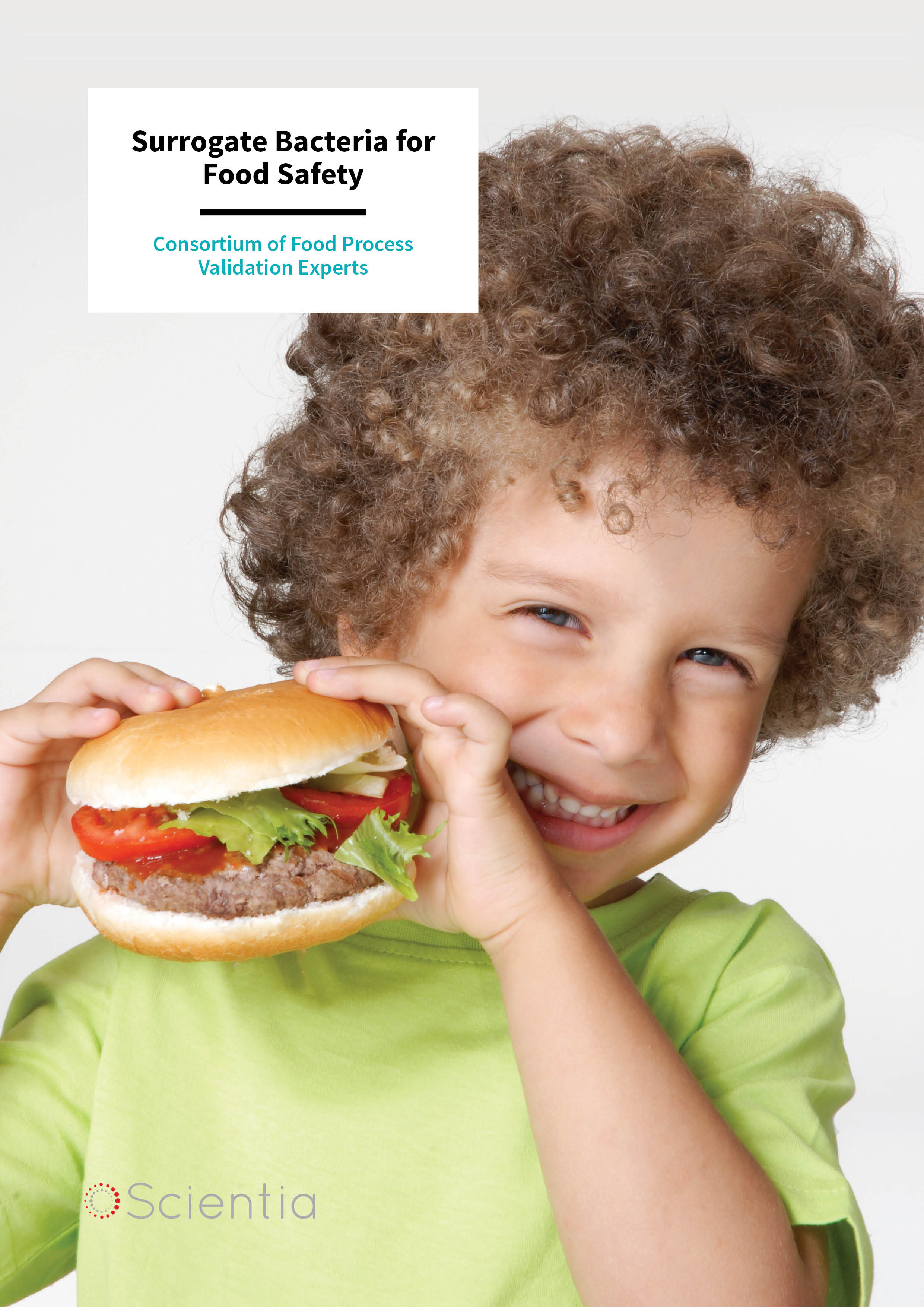 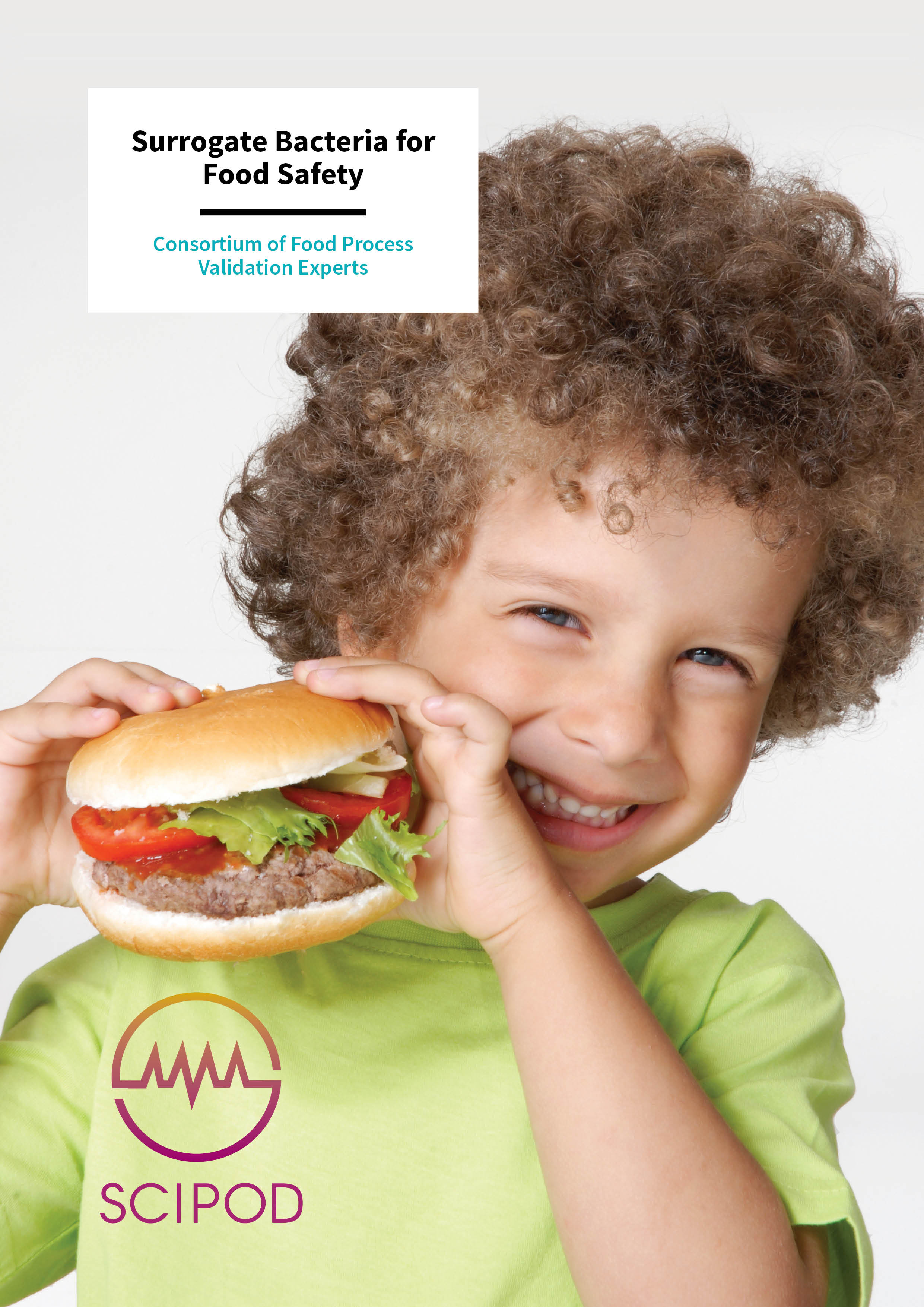 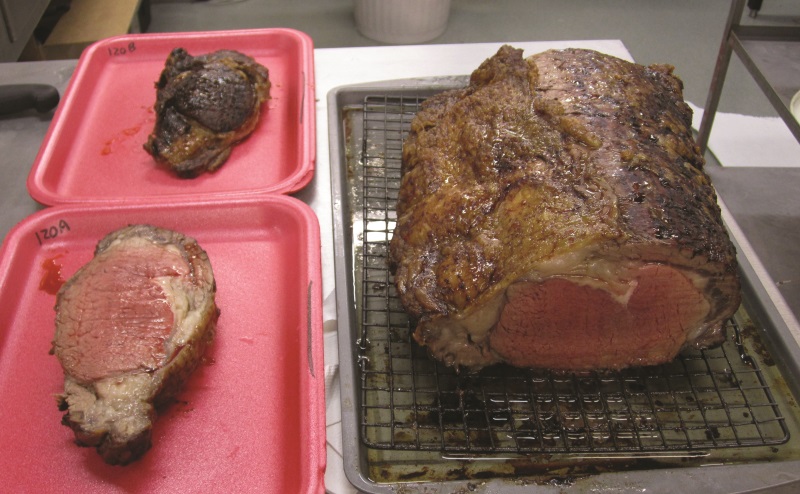 STEC cells are naturally found in the intestinal tracts of cattle, sheep and goats. The risk of beef contamination can be reduced by applying proper antimicrobial interventions during the slaughter and processing of the carcass – interventions such as hot water washes, acid sprays and applying food grade antimicrobials. After the Jack-in-the-Box outbreak, the collaboration of food scientists tested various carcass and sub-primal cut interventions in the laboratory and pilot plant facilities, including hot water sprays, acetic acid, lactic acid, and ozone treatments.

These experiments were helpful in identifying effective bacterial interventions – but 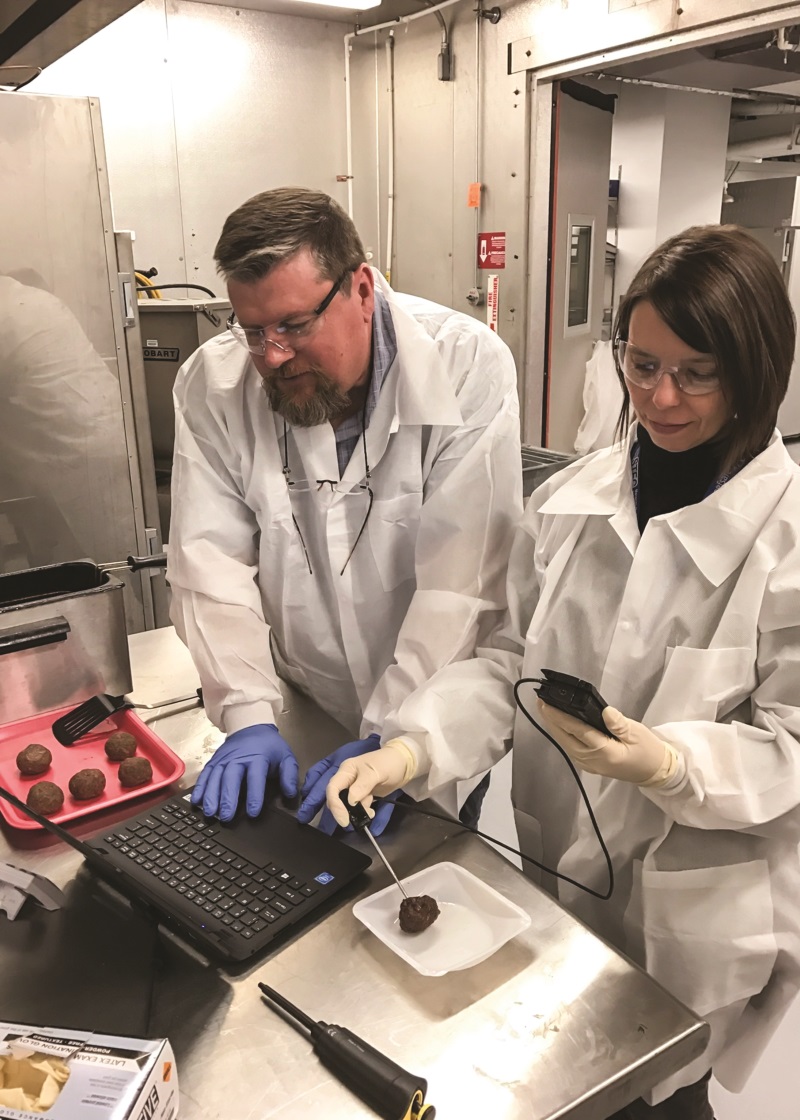 slaughterhouses where cattle are converted into cuts of meat under real-world conditions can be very different than the team’s laboratories and pilot plants. They then attempted to test the interventions in actual slaughter plant facilities under real-world conditions, but soon ran into a few snags. In actuality, O157 is extremely difficult to find. When present, it is likely to be located on the carcass surface, with very low numbers of cells constituting an infectious dose. And to make things even more complicated, the contamination is not evenly distributed. That made it very difficult to validate the effectiveness of the team’s laboratory-tested interventions in real life. In the lab, the team had intentionally contaminated carcass surfaces with O157, and measured the reduction in bacterial populations after each intervention. But this would be disastrous in a slaughterhouse, even for validation purposes.

HACCP validation really began to come of age in the food processing industries around 2012 when several regulatory documents were published providing guidance. HACCP is a systematic approach employed by food processing facilities to prevent biological, chemical and physical hazards that can compromise food safety. HACCP started as a collaboration between NASA, the Pillsbury Company and the US Army laboratories to provide safe food for space expeditions – and ended up being the standard quality assurance system for food on Earth!

At the heart of implementing a HACCP system and the new FSMA-PCHF is ‘validation’. Process control within a food processing facility must be validated to ensure that controls are working to eliminate or control hazards. To demonstrate that a processing facility is capable of controlling a foodborne pathogen such as Salmonella, Listeria monocytogenes or STEC through various interventions, an ideal experiment would involve intentional contamination with the above-mentioned hazards followed by a demonstrated reduction of the bacterium through the process. However, introducing dangerous pathogens in a processing facility would be unwise and potentially hazardous. But how then could validation be carried out to assure interventions are functioning as designed to preserve food safety? 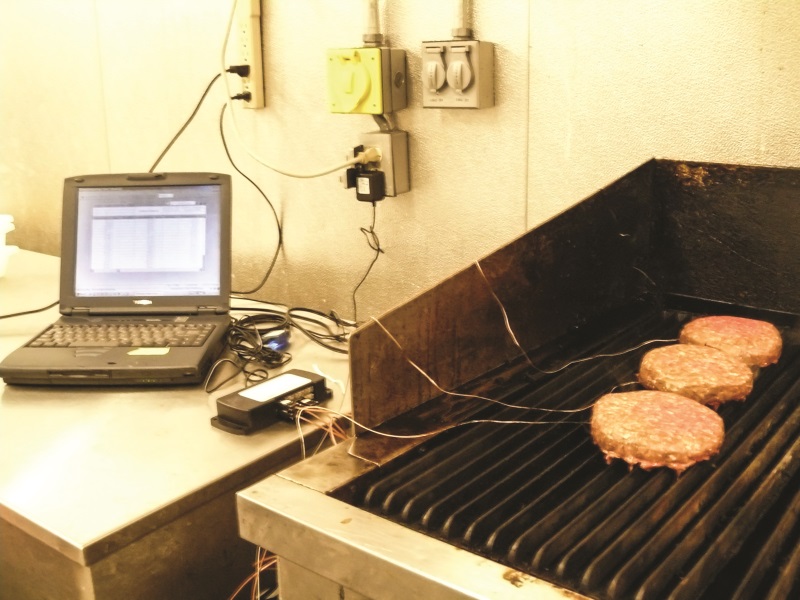 It was at this time that two members of the CFPVE, Dr Gary Acuff and Dr Jim Dickson, came up with a solution. They began researching the possibility of using ‘surrogate’ bacteria in microbial validation studies – non-pathogenic bacterial strains that could be used to simulate the pathogen of interest. An ideal surrogate should have very similar biological characteristics to their pathogenic counterpart – and must show no pathogenicity whatsoever. Drs Acuff and Dickson spent several months collecting bacteria from cattle feedlots and swabbing the hides of cattle in their quest for an ideal surrogate to O157.

They later tested their collected bacteria in the lab, and compared their growth rates, heat resistance and acid resistance with those of E. coli O157. Basically, they were looking for a non-pathogenic twin for E. coli O157. They didn’t find any single strain with exactly the same features as O157, but did isolate five strains that represented E. coli O157 fairly closely when used together in a mixed culture. The pair then tested this cocktail of five strains against various carcass interventions and found that they matched up well to what they had reported for E. coli O157. Hence, they tested them in actual slaughter facilities by contaminating carcass surfaces with the cocktail, and then measuring the numbers of bacteria before and after the carcass treatments. The team’s results would be indicative of what would happen if the interventions were used against the target pathogen, E. coli O157. These cultures are now available through the American Type Culture Collection (ATCC).

The ATCC is a non-profit organisation that acts as a national repository for microbial strains for microbiological standards, as well as cell lines for culturing – essentially an ‘open access’ microbial zoo that researchers anywhere can use. The surrogate strains were donated to the ATCC collection so that anyone could use them, in the hopes that they would become a standard part of HACCP verification. ‘As food microbiologists, we felt the process for validating a carcass intervention was very clear,’ states Dr Acuff. However, the meat and poultry industry didn’t initially share this view, and they received more industry resistance than they bargained for. For industry officials, the thought of contaminating some of their carcasses with bacteria, albeit harmless bacteria, was alarming – even for the purpose of safety validation!

It was painfully clear that there was a chasm between food microbiology laboratory research and food industry in-plant process validations, in both theory and practice. It was at this time that the group of collaborating food scientists decided to form a consortium to bridge this gap, bring diverse process and product expertise, and implement a more scientifically-informed approach to food safety validation. It was at the International Association for Food Protection (IAFP) annual meeting of 2011 that the scientists decided how this would be organised, and the CFPVE was born.

From the outset, the CFPVE has worked hard to support food industry stakeholders in promoting and applying scientifically sound approaches and protocols for food process validation, providing practical, standardised and unbiased interpretations of existing science, guidelines and policies, and controlling hazards inherent in food production, especially bacterial pathogens. A major part of the Consortium’s work is extensive dialogue and outreach with stakeholders from industry, government and academia through a variety of channels – fact sheets, publications, white papers, training materials, web sites, videos, workshops, webinars and podcasts.

Furthermore, members of the Consortium regularly consult with small and medium scale food processors to assist them with validation and verification activities and to help them develop new ‘Food Safety Plans’. Reviewing existing food safety plans for such processors is a critical activity that the members of the Consortium are involved with, as this helps determine the compliance of the processors to the new FDA regulations.

The Consortium’s formation was timely, as the need for an unbiased, effective and unified approach to food safety has never been greater. Food process validation is without a doubt essential, but there is currently a degree of uncertainty as to how validation should be used to assure food safety – as the industry’s initial resistance to using surrogates attests. This is more than just about promoting surrogates in HACCP verification – the CFPVE is helping industry to verify HACCP ‘critical control points’ beyond microbiological testing of finished products. The expertise supplied by the CFPVE is helping processors assure safety of their food products through properly conducted validation of antimicrobial interventions and food manufacturing practices, especially meat and poultry, and as a result minimising the risk of pathogen-related food poisoning for consumers.

As well as being actively involved in the CFPVE, several members of the CFPVE have continued their quest for suitable surrogates as well as approaches and protocols for application to HACCP. This work has gone beyond E. coli O157 and all regulated STEC serotypes and has focused on testing interventions to reduce Salmonella contamination in meat, poultry and other foods. Significantly, the team has found that mixed cultures of non-pathogenic E. coli strains can also act as suitable surrogates for Salmonella. They have microbiologically tested meat, poultry and food processing interventions beyond slaughter, including washing beef carcasses with lactic acid and trisodium phosphate, refrigeration and frozen storage and fermenting meat for sausage production. These surrogates are being evaluated for their behaviour in other novel food processing processes such as high-pressure processing, radio frequency heating and others.

The team’s introduction of surrogates in food safety validation emphasises the need for strong collaboration and alignment among the food industry, policy makers and academia to provide us with food that is high-quality, nutritious and safe. While the risk of foodborne illnesses cannot be eradicated completely, robust process validations and responsible practices by farmers, slaughterhouses, processors, distributers, retailers, restaurants – and indeed consumers – can minimise the risk significantly. 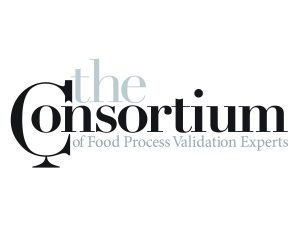