The Sargasso Sea contains a unique ecosystem based upon floating seaweed. It is a marine treasure that is threatened by pollution and other human activities. The Sargasso Sea Commission, an international team of researchers and policy makers, is working to preserve and protect this wonder of the ocean.
The Golden Rainforest of the Ocean

Home to countless legends of wrecked ships and mysterious events, along with unique communities of marine life, the Sargasso Sea is an irreplaceable natural wonder. Despite its intrigue, these waters and their inhabitants are threatened by pollution, and many are working to save this amazing ecosystem.

Beyond the creatures that live exclusively in the seaweed rafts, many species of endangered sea turtles hide in the Sargassum rafts during their formative years to escape predators, eat, and grow big enough to brave the open ocean as adults. The larvae of several fish species are often found associated with Sargassum and numbers of fish species use the Sargasso Sea as a breeding ground and migratory route, including sharks, tuna and billfish. The deep water of the Sargasso Sea, below the Sargassum mats, is the only known spawning ground for the endangered American and European eels.

As well as serving as a habitat for a multitude of species, the Sargasso Sea’s golden rainforest is highly important to the residents of Bermuda for many reasons. The golden Sargassum seaweed is carried inshore during the winter months, where it acts as an important food source for reef fish when it sinks to the coral reef below. In addition to providing nutrients to corals and other benthic organisms, it also provides food and habitat for intertidal organisms, which in turn are the prey of many shorebirds. 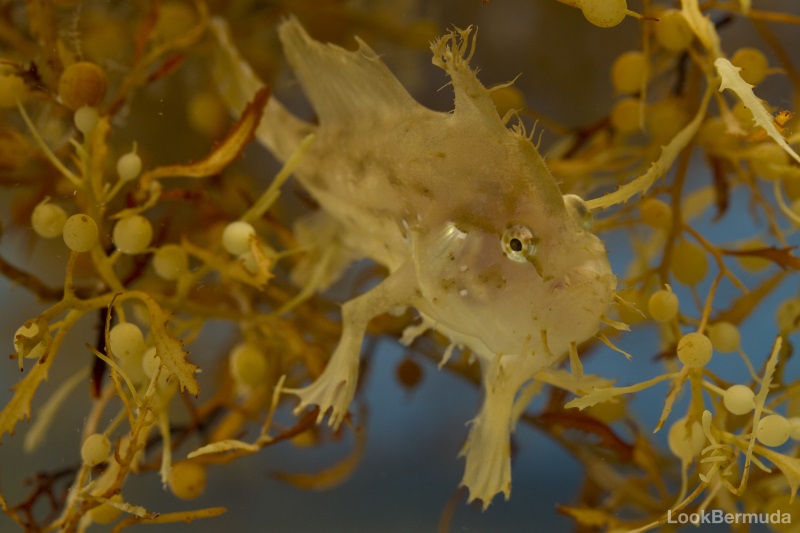 In addition to feeding the Bermuda food chain, the decomposing washed up Sargassum helps fortify the beaches, preventing erosion, and is used as fertiliser by island farmers. Fishing from the shores of the islands is partly sustained by the transport of fish larvae and adults that raft within the floating seaweed. The Sea is an integral part of the island chain’s maritime history, as well as an important component of its economy and the economies of other bordering nations.

However, the Sargasso Sea is currently threatened by climate change and more directly by pollution and other human activities including overfishing. Any pollutants that get into the central Sargasso Sea are trapped there by the encircling currents, and the area is now home to the North Atlantic Garbage Patch – an accumulation of mostly degraded plastic covering an area larger than the state of Texas, which is held in place by the gyre. 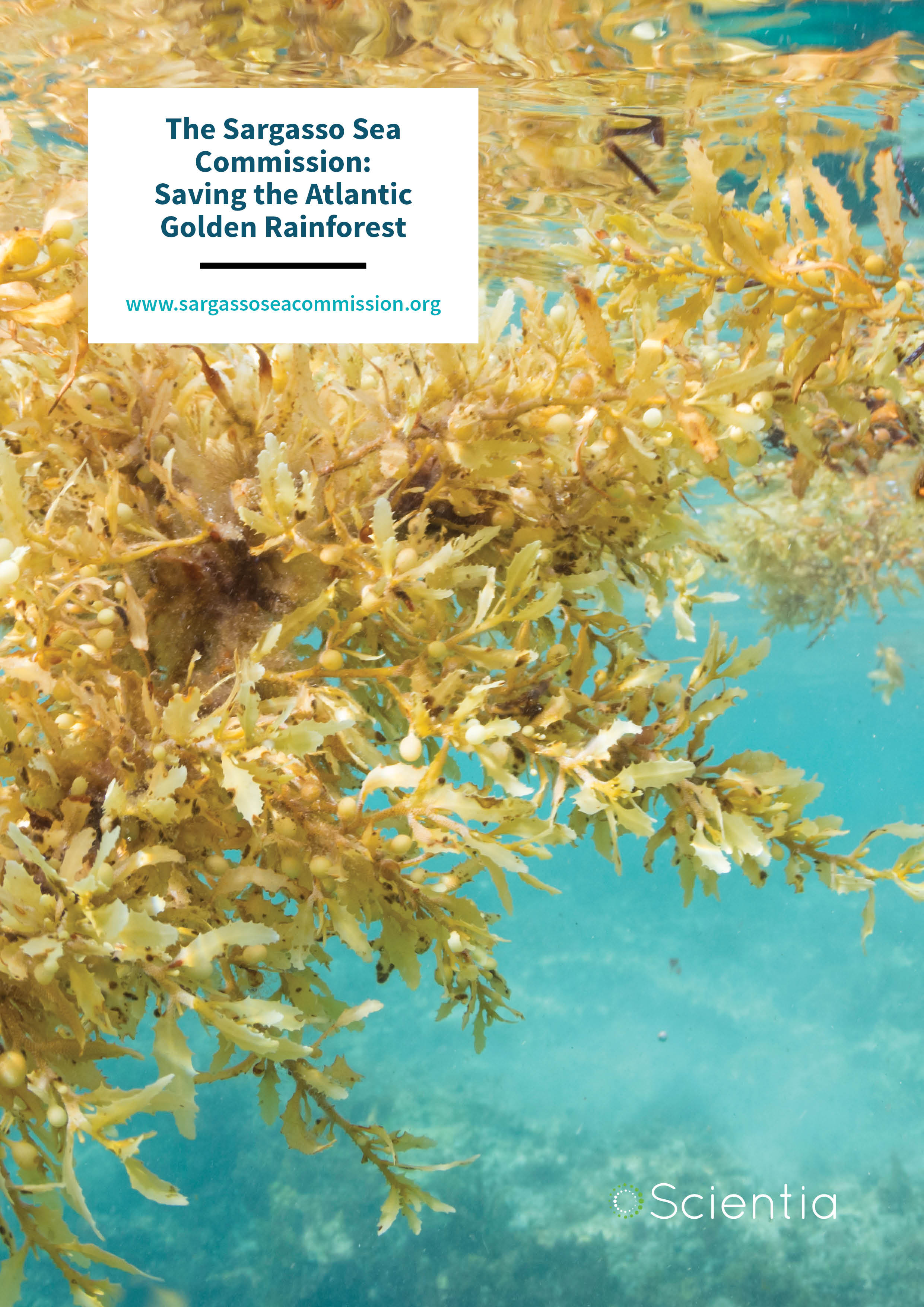 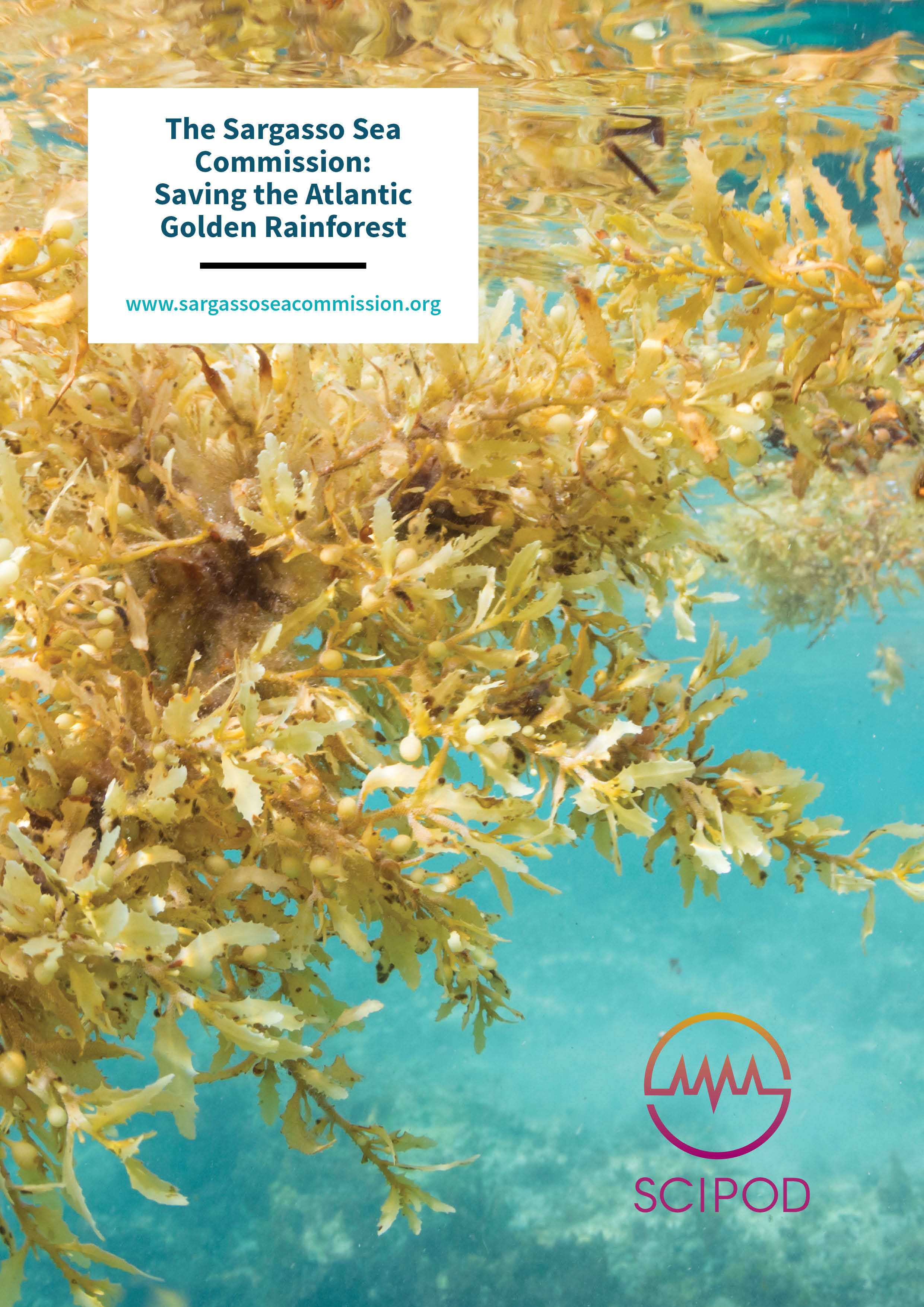 Among the greatest challenges facing this area are legal ones – the ocean belongs to no country. Over 50% of the planet’s surface is covered by marine waters that fall outside of the governance of nations. These so-called ‘High Seas’ require extended international cooperation and collaboration, since they fall outside of any country’s legal jurisdiction.

In 2011, the Sargasso Sea Alliance – a collaboration led by the Government of Bermuda – began laying the groundwork for international collaboration that could provide stewardship for the area. Three years later, the Hamilton Declaration and Sargasso Sea Commission were borne out of those efforts, in the process developing a conceptual framework for how international waters could be collaboratively managed.

In 2014, the Hamilton Declaration on Collaboration for the Conservation of the Sargasso Sea was signed, recognising the ecological, economic, and research value of these waters. The Declaration was initially signed by five governments – Bermuda, the Azores, Monaco, the United Kingdom, and the United States. The British Virgin Islands, the Bahamas, and Canada joined in 2016, followed by the Cayman Islands in 2017. Other governments are considering signing also.

The Declaration establishes stewardship over the Sargasso Sea and aims to encourage and facilitate research into the wildlife and effects of pollution on the blue waters. The Declaration led to the appointment of the Sargasso Sea Commission by the Government of Bermuda. The Commission is a group of ‘distinguished scientists and other persons of international repute committed to the conservation of high seas ecosystems’, and in particular, this natural wonder. Commissioners are appointed by the Government of Bermuda after a consultation process involving the signatory governments.

‘The role of the Commission members … is to exercise a stewardship role for the Sargasso Sea and keep its health, productivity and resilience under continual review,’ says Dr David Freestone, Executive Secretary of the Sargasso Sea Commission. Rather than being associated with any one country, the Commission operates as a stand-alone entity, established under Bermudian law. 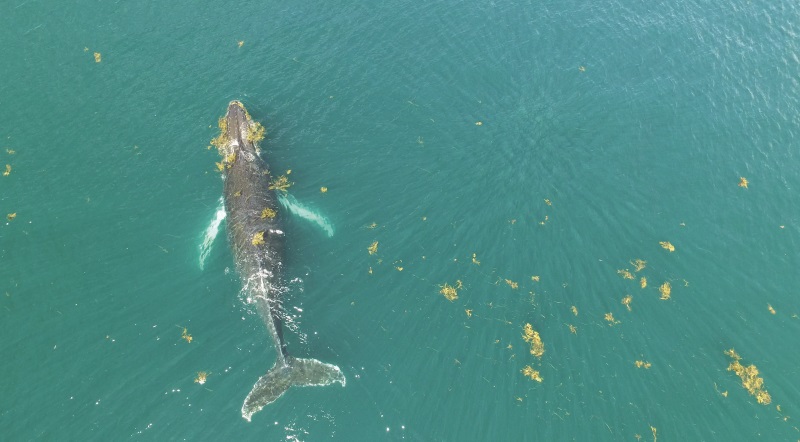 The Commission’s Work So Far

In only a few short years, the Sargasso Sea project has set a new paradigm for conservation of areas beyond national jurisdiction, bringing together stakeholders from multiple countries and organisations. In 2011 the Alliance published a baseline study on the Protection and Management of the Sargasso Sea and the following year, the parties to the Convention on Biological Diversity, drawing on this study, agreed that the Sargasso Sea be included on a list of Ecologically and Biologically Significant Areas (EBSAs). Using the EBSA decision as a basis, special conservation measures for the Sargasso Sea were agreed upon in 2015 by the Northwest Atlantic Fisheries Organisation (NAFO) that established a moratorium on bottom trawling on Sargasso Sea seamounts in its area and gear restrictions on midwater trawling.

In 2014, the Commission brought together cable companies, marine researchers, academics, and legal scholars to discuss the environmental effects of laying submarine fibre optic telecommunications cables across the ocean floor, which provide over 97% of worldwide international communications.

The Sargasso Sea Commission is also working with more traditional conservation groups to protect specific wildlife, such as the endangered American and European eels, and collecting further data to support the need for extending protections to this incredible body of water. In collaboration with the Convention on Migratory Species, efforts are underway to define and protect the migration routes of the European eel to the Sargasso Sea as well as its spawning areas there.

The Commission has also collected data on how the Sargassum seaweed bolsters numerous species of fish that are commonly sought in commercial fishing, as well as charismatic and endangered sea turtles, all of which rely on the masses of golden seaweed for shelter and nutrition. Utilising this data, the Commission aims to partner with countries and commercial fishing operations to properly manage fishing activities, and ensure that these populations will enjoy the Sargasso Sea as a safe haven for generations to come. Ongoing efforts to tie fish populations to human activity are revealing even more ways that the Sea can be preserved through conservation efforts.

The Sargasso Sea Commission is also working to develop a Stewardship Plan for the Sargasso Sea – which would be the first such plan for an open high seas area. This would include parameters that could regulate different types of human activities that disrupt the golden seaweed rafts and pose a threat to the life around them. Limitations would require the cooperation of multiple countries and private sector corporations through international bodies such as the International Maritime Organization (IMO) and the Regional Fisheries Management Organizations. 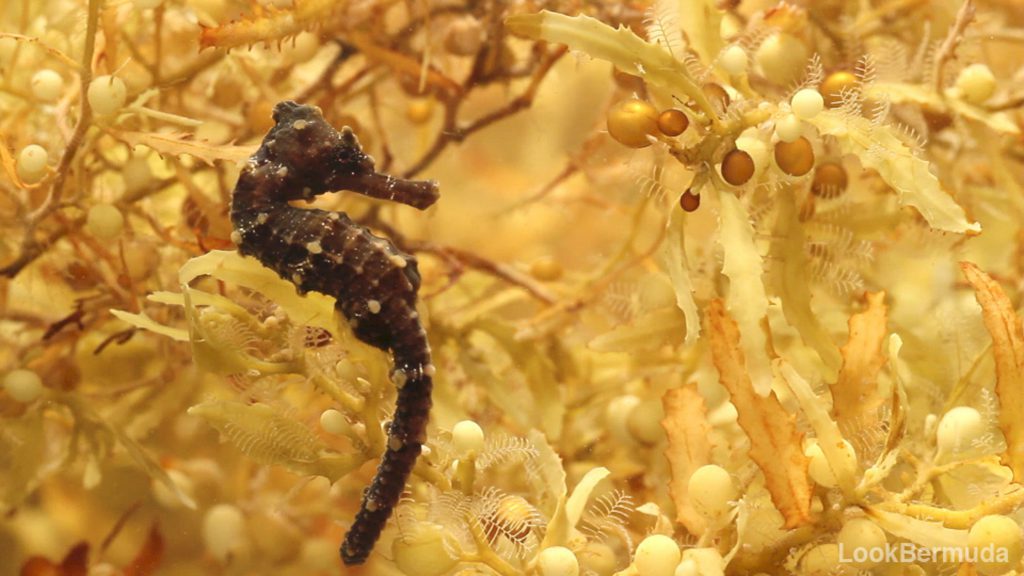 A Bright Future for Blue Waters

The innovative work of the Sargasso Sea Commission is currently mainly funded through the support of private donors – it is seeking further funding to continue its important work into the future. The Commission aims to continue working to protect the Sea as a whole, while also working to protect the migratory range of the European eel, to regulate vessel activities, and to conserve threatened fishery resources in the area. It is also working with NASA to develop comprehensive satellite imagery of the area.

‘We are working closely with NASA on its pilot COVERAGE project, which will provide a visual representation of its satellite data on the Sargasso Sea,’ explains Dr Freestone. ‘This can be overlaid with other data on animal movements and human activities in the area.’ This data could help researchers identify the most critical areas for conservation efforts, and better understand how human activity affects the Sea. With the Commission’s continued efforts, this beautiful natural treasure will endure for many future generations to come. 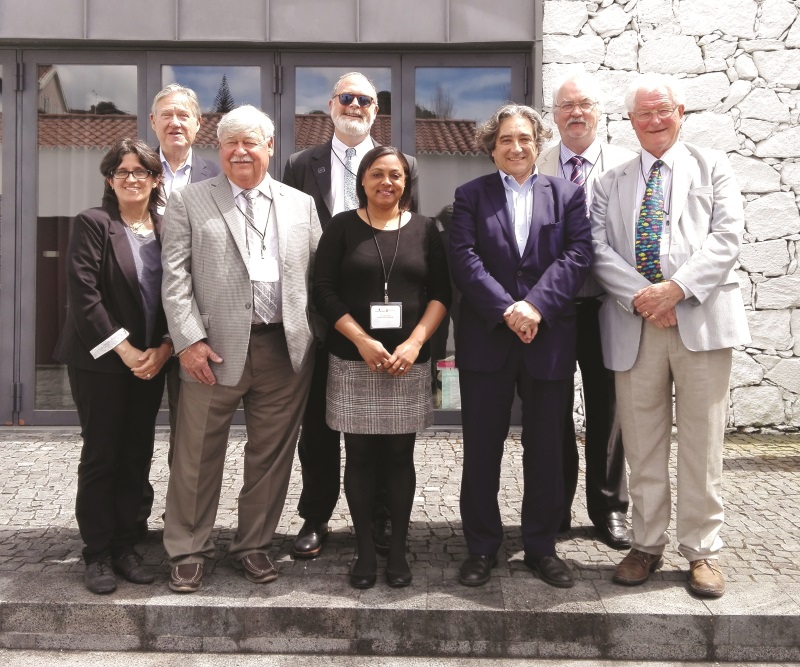 Commission as of April 2017: Wilfred Moore, Frederico Cardigos and Teresa Mackey are not pictured.

Dr David Freestone
A globally recognised specialist in international environmental law and Law of the Sea, Dr David Freestone is the Executive Secretary of the Sargasso Sea Commission.
E: dfreestone@sargassoseacommission.org

Teresa Mackey
Teresa Mackey is a Marine Research Fellow with the Sargasso Sea Commission Secretariat. She is graduate of the College of William & Mary in English and Marine Science.
E: tmackey@sargassoseacommission.org

Professor Howard Roe
Professor Howard Roe has over 50 years of marine science experience, covering a very broad range of biological and ecological research in marine habitats, and he is the former Director of the National Oceanographic Centre in Southampton, UK.
E: howard_roe@hotmail.com

Mark Spalding
Mark Spalding is President of The Ocean Foundation, a National Academies of Sciences Ocean Studies Board member, Senior Fellow at the Middlebury Center for the Blue Economy, CEO of SeaWeb, advisor to the Rockefeller Ocean Strategy (an unprecedented ocean-centric investment fund), and designer of the first-ever blue carbon offset program, SeaGrass Grow.
E: mspalding@oceanfdn.org

Senator Wilfred P. Moore, Q.C.
Wilfred P. Moore served 20 years in the Senate of Canada and has been an outspoken advocate for policies protecting the oceans. He was a strong advocate of the Sargasso Sea Alliance, and was instrumental in persuading Canada to become the eighth Signatory to the Hamilton Declaration on December 3, 2016.
E: wpmhabs@gmail.com

Frederico Cardigos
With a background in marine biology and nature conservation, Frederico Cardigos has gone on to a career in island marine ecology, currently he serves the Region of the Azores as their representative in Brussels. He was regional director for the environment and maritime affairs and director of the Marine Park of the Azores.
E: Frederico.AD.Cardigos@azores.gov.pt.