Underrepresented is not often the thought that comes to mind when describing males in science, technology, engineering and mathematics (STEM). However, there are striking gender and ethnic disparities across STEM fields as white males disproportionately occupy the sector in the US. In recognition of this, Dr Jerrod Henderson and Ricky Greer of the University of Houston developed an after-school academy to motivate underrepresented boys to become the next generation of scientists, engineers and mathematicians.

The Importance of Inclusive STEM Education

STEM is the fastest growing sector in the US economy, creating jobs that pay a higher wage relative to other sectors. STEM skills are vital for a healthy economy, but STEM employers are increasingly requiring at least a high school degree and other specialised skills. There is a stark ethnic divide as African Americans, Latinos, Native Americans and Pacific Islanders are underrepresented in STEM education and careers. The same is true of women and those with special learning needs.

For the sector to maintain innovation and growth, students from all backgrounds must learn the skills and expertise necessary to pursue a STEM career. Research also suggests that workplaces benefit from diversity because diverse teams bring multiple perspectives to the table and boost creativity. This is particularly relevant to the STEM sector because it thrives on turning fresh ideas into technological advancements.

The Case for Early Intervention Among Males

Research demonstrates that the problem of underrepresented male persistence in higher education, especially STEM, is a result of systematic neglect that starts in childhood. For example, black males are overrepresented in special education, and are disproportionately disciplined in school. Interventions during a student’s teenage years might not be enough to reverse the trend of underrepresentation, as research suggests that student interest in science is high at 10 years old. Therefore, early exposure and engagement is likely to be a key intervention for developing interest in STEM careers.

In 2013, Ricky Greer and Jerrod Henderson created the St. Elmo Brady STEM Academy (SEBA) in Illinois. The academy targets fourth- and fifth-grade boys to combat the growing disinterest in STEM fields that traditionally occurs at that age. Two participating elementary schools nominated boys that they felt could benefit from the academy. Both schools have similar diversity profiles – one of the schools is a STEM Magnet School, and the other is a typical elementary school.

‘The most important finding has been the impact of father engagement on participants in the program. It has been reported by participants that fathers help to cultivate their excitement and curiosity for STEM exploration.’

The goals of SEBA are to expose, engage and empower underrepresented male students, and to motivate them to become the next generation of scientists, engineers, and mathematicians. Students engage in SEBA activities three times each week, on a Saturday and two weekdays, for 16 weeks over the course of two school semesters. Students participate in the program for 75 minutes after school, and for two hours on Saturdays.

A typical week at the academy begins with a warm-up discussion from a professional in the STEM field, followed by a themed activity. It is then concluded by a review and reflection of the week’s activities. An important aspect of the program is allowing students to learn-by-doing through partaking in hands-on experiments. The educators maintain engagement among the young learners by encouraging exploration and inquiry. Learning is not restricted to the classroom, as the educators also organise field trips that allow students to visit university labs, museums, and engineering open houses. 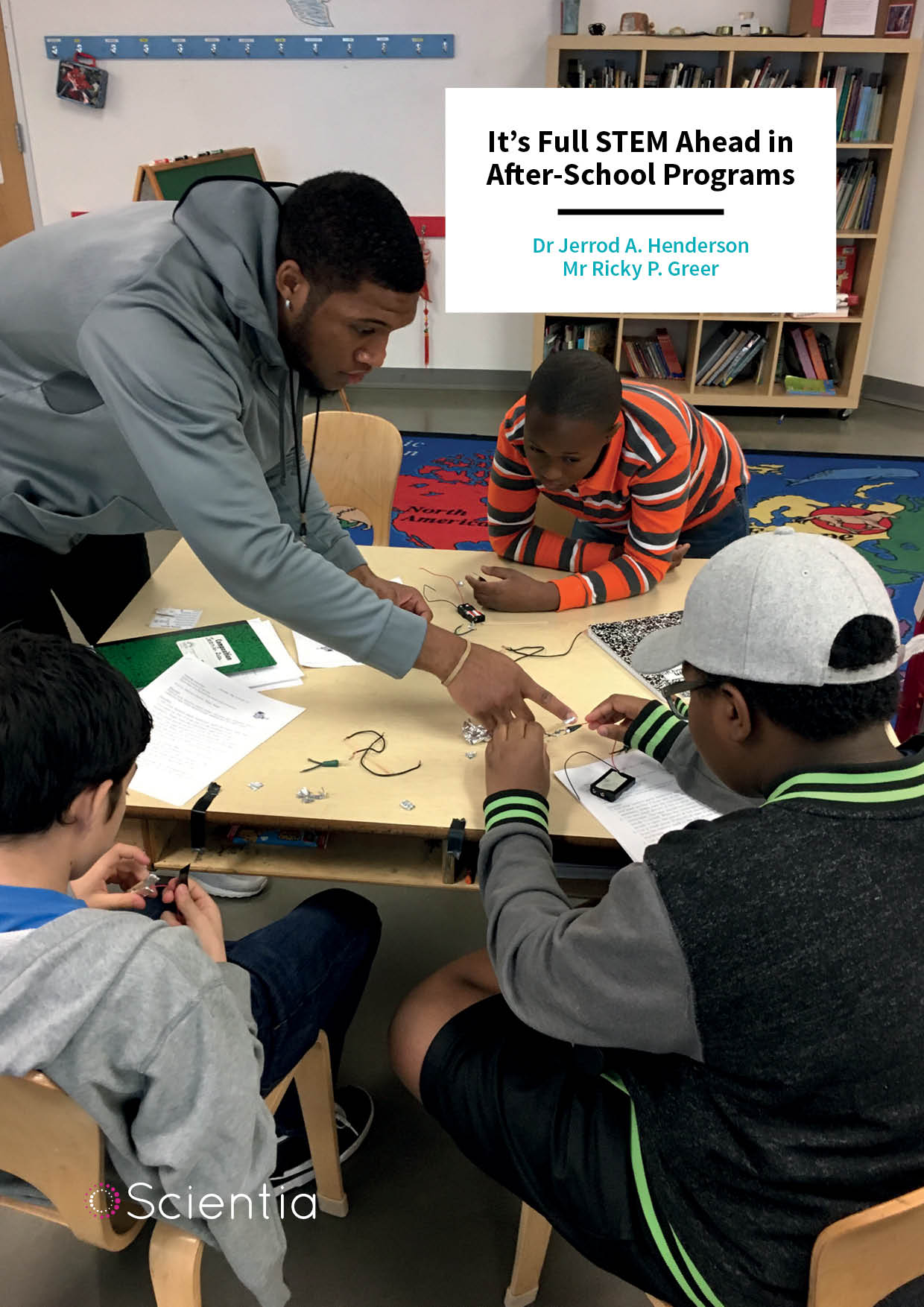 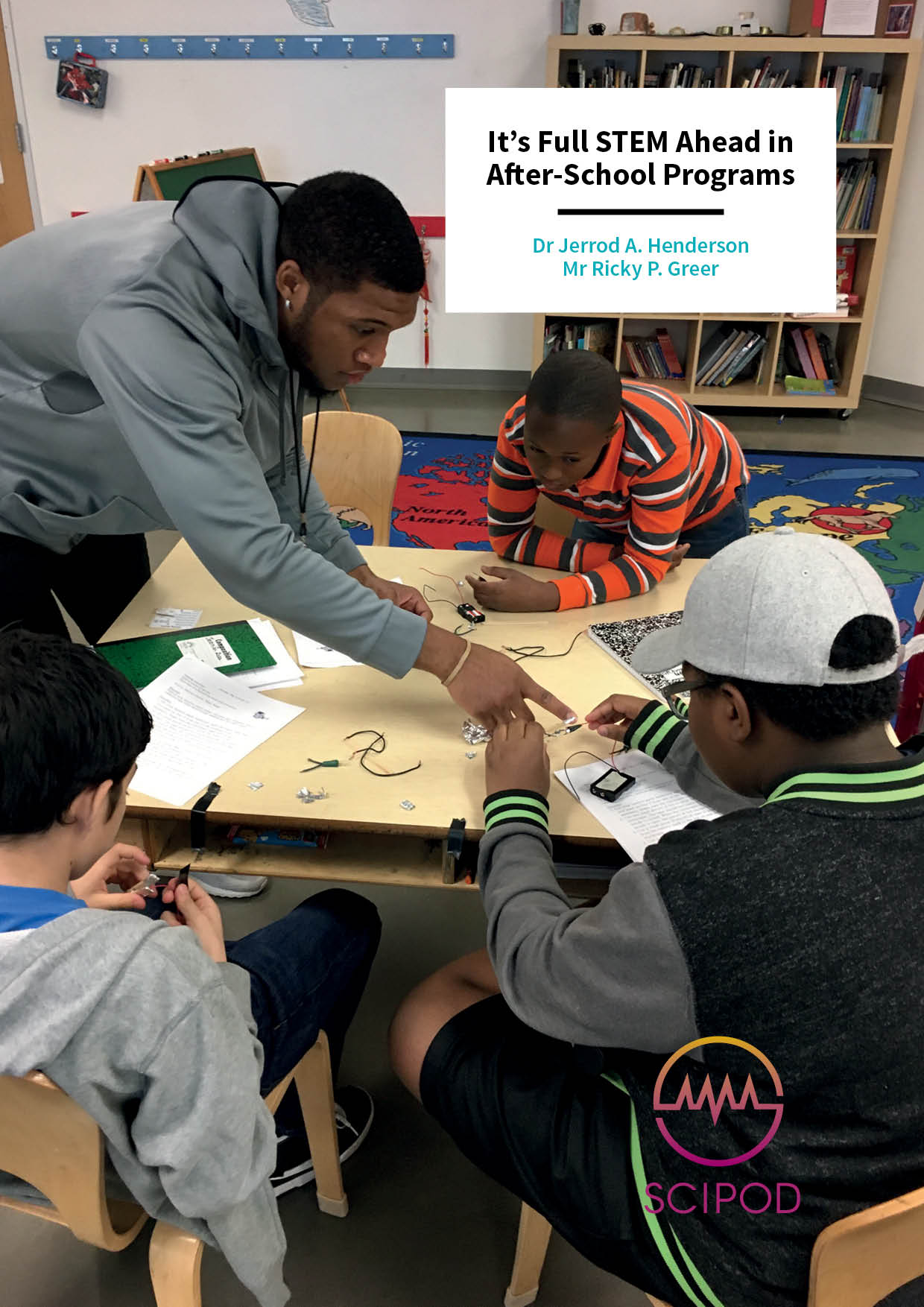 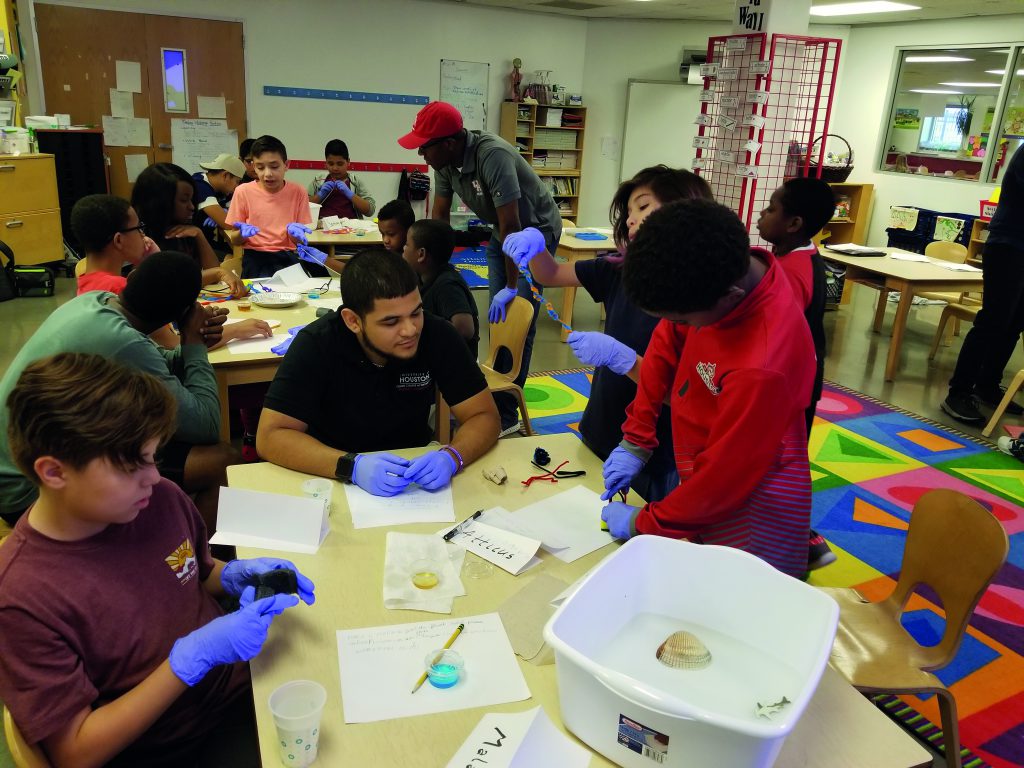 Role Models as Sources of Inspiration

The program seeks to foster engagement in STEM subjects by having students combine learning with interaction from their parents and other mentors. STEM professionals from underrepresented groups interact with the students each week and act as relatable role models. On Saturdays, fathers or other relatives of each student enrol in the academy, and are invited to actively participate in the program and conduct experiments alongside their children. In a typical week, the number of male role model attendees varies from five to ten.

Co-Founders (Greer and Henderson) have opened up opportunities to undergraduate and graduate students who are interested in volunteering as teaching assistants at the academy. Before the successful applicants are put to work, they first undergo training in classroom management, mentorship and teaching techniques. Undergoing a similar process, university students are selected to act as mentors for those elementary students that do not have relatives available to participate. Many of these student mentors are from the underrepresented groups that the academy targets.

In the second year of SEBA, Dr Henderson, Greer and their colleagues measured the overall impact of SEBA by collecting feedback about the program design, implementation, content and outcomes from the school staff, parents, program coordinators, university faculty and participants involved in the academy.

The team collected student survey responses and conducted interviews during the final week of the program. The survey consisted of simple ‘yes’ or ‘no’ answers and follow up questions that allowed for explanation of the given answers. Of particular interest to the team is the impact of the STEM academy on student interest and engagement at school, career ambitions and confidence. ‘Plainly put, we seek to understand how underrepresented fourth- and fifth-grade students (African American, Hispanic boys) become interested in STEM and the impact of fathers and mentors on those decisions,’ explains Dr Henderson.

In the follow up questions, the boys explained that SEBA increased their participation in school classes and that the academy increased their confidence levels. One student stated that he ‘didn’t use to like science but when we did the activities at St. Elmo Brady [they] made me more confident to do it’. 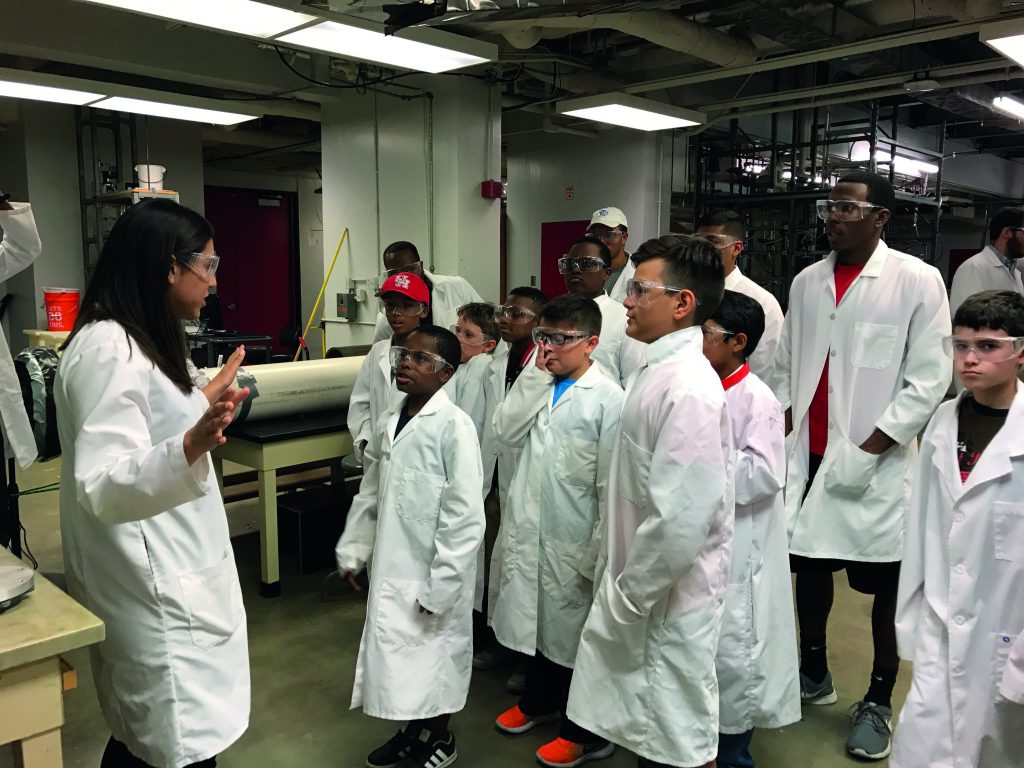 A key feature of the SEBA program is the involvement of STEM professionals in educating the children on the career options available. Upon entering the SEBA program, 81.8% of students indicated interest in a STEM career, this increased to 87.5% at the end of the academy. One student praised this component of the program stating, ‘I think the program helped me because you helped me introduce a part of what I wanted to do in life’.

Not only did the program increase interest among STEM fields, it also generated interest in specific STEM fields. For example, upon entering the program, a fifth-grade student indicated his interest in becoming an engineer, while on the exit survey he revealed interest in civil engineering and chemistry.

Because the boys and many of the professionals involved in the academy are both from underrepresented groups, the students were exposed to relatable role models working in STEM fields. A fourth-grade student in the SEBA program confidently exclaimed ‘if they look like me then I can probably do what they did’.

The Importance of Fathers

During the program students learn a lot by engaging with their fathers. The exit survey at the end of the program’s second year highlighted the important role of fathers during the boys’ time at the academy, and their influence on student interest in science. ‘The most important finding has been the impact of father engagement on participants in the program,’ says Greer. ‘It has been reported by participants that fathers help to cultivate their excitement and curiosity for STEM exploration.’

In the exit survey, 91.7% of students reported said they enjoyed and learned from having fathers involved with the program. Students commented on how the fathers involved acted as positive influences on their interest in science. Interestingly, the effect of participating fathers was not limited to their own child. For example, a fifth-grade student whose father did not participate in the program, indicated that the participating fathers, ‘showed me how to act’ in these types of environments. 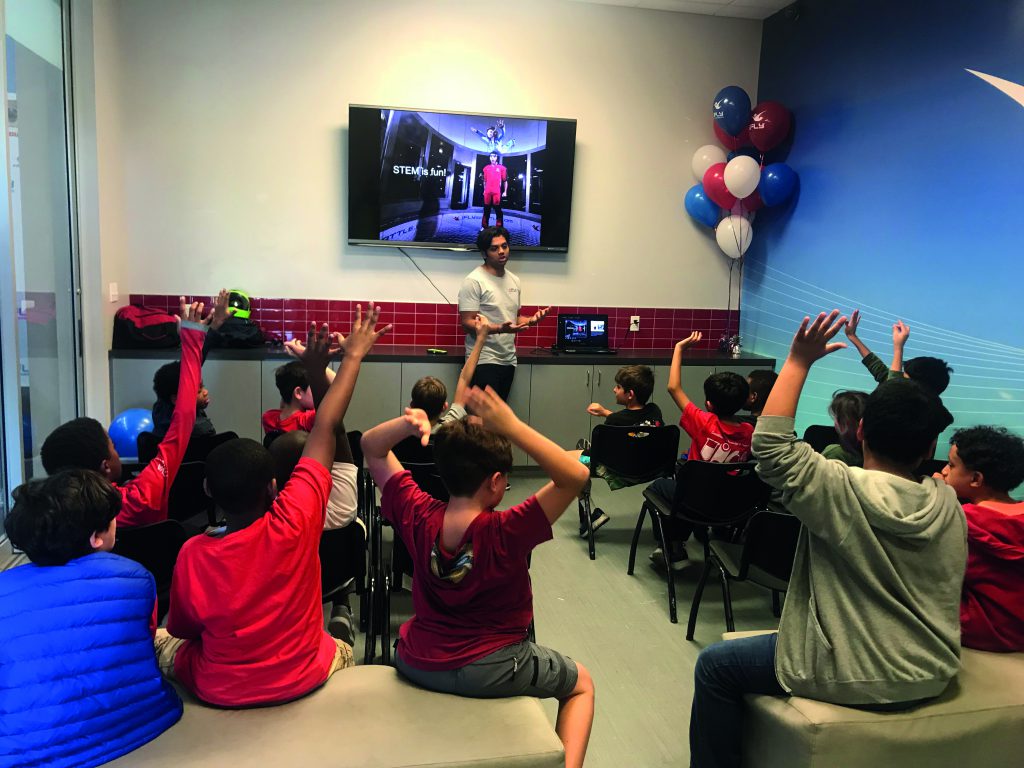 SEBA is now in its fifth year, and given the overwhelming success of the program, the team has big hopes for the future. Plans are in place to increase the number of students participating in the St. Elmo program, and to increase the amount of parental involvement. To facilitate these aspirations, the team is currently reaching out to benefactors for financial support and recruiting additional teaching assistants and mentors.

The team hopes that the approach they have developed is adopted by other locations, so that after-school academies are set up across the US. 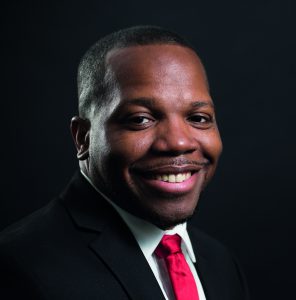 Dr Jerrod A. Henderson is an Instructional Assistant Professor and Director of the Program for Mastery in Engineering Studies at the Cullen College of Engineering, University of Houston. Here, he is also Co-Founder of the St. Elmo Brady STEM Academy. He holds two BSc degrees, in Chemical Engineering and in Chemistry, an MSc in Chemical & Biomolecular Engineering, and a PhD in Chemical & Biomolecular Engineering. He joined the Cullen College of Engineering in 2016, after several years working as a Lecturer and Coordinator of design projects at the University of Illinois. While in university, he earned distinction as a NASA Harriet G. Jenkins Graduate Fellow. His research interests are in engineering identity formation and persistence among underrepresented students, especially African American males. 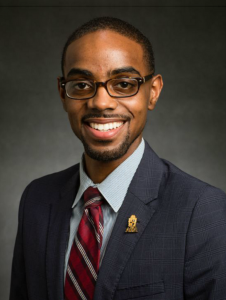 Mr Ricky P. Greer is a Co-Founder and Program Director of the St. Elmo Brady STEM Academy. He will soon complete his Higher Education MEd degree from the University of Houston. He holds a BA in History from Tuskegee University. Greer has a passion for helping students succeed at navigating the university experience. He strives to cultivate academic awareness, academic excellence and the development of leadership skills in students.