Communicating science to the public is a difficult undertaking; communicating it in a way that encourages people to change their behaviour is a rare achievement. With her television series Voice of the Sea, Dr Kanesa Duncan Seraphin has produced an innovative program that connects viewers with ocean science and scientists and encourages them to take action to protect our seas.

One of the greatest challenges in science communication is reaching the widest audience possible. It takes creativity to share often complex concepts in ways that connect with a broad audience. It also takes resourcefulness to package information in a form that has the potential to reach a large number of people, particularly when the desired demographic extends beyond those who would normally seek out science content.

Both in print and online, science content is primarily accessed by people who either already enjoy learning about science or who are looking for specific information. When the goal is to drive community-wide changes in conservation behaviour, researchers need a platform that reaches the entire community. For University of Hawai‘i (UH) professor and marine biologist, Dr Kanesa Seraphin, that platform is television. As producer and host of the television series Voice of the Sea, Dr Seraphin is using an ideal medium to share ocean science with her community and beyond.

A Fresh Take on Ocean Science

Voice of the Sea provides entertaining and informing marine science content that is not only relevant to Hawai‘i residents and visitors but also encourages eco-friendly relationships with the ocean. Each episode revolves around a specific topic and features scientists, cultural leaders, public servants, or other ocean experts, sharing their research, knowledge, and relationship with the sea.

The series covers topics ranging from reef fish migration, to nutrient cycles, to unusual deep-sea creatures. Voice of the Sea makes a strong effort to explore lesser-known habitats, plants and animals, rather than focusing solely on large, charismatic species, such as whales and sharks. This approach helps to foster an appreciation for the broad complexities of marine ecosystems as a whole.

‘Voice of the Sea shares stories of scientific, environmental, and cultural work in local contexts. The series expands viewers’ perceptions of how and by whom research is conducted, providing career connections and engaging the community in societal issues.’

One of the series’ primary aims is to help viewers identify and engage in behaviours that support healthier oceans and beaches. ‘We are partnering with researchers to engage viewers in specific behaviours, such as water conservation and the preservation of nesting bird habitat,’ Dr Seraphin explains. 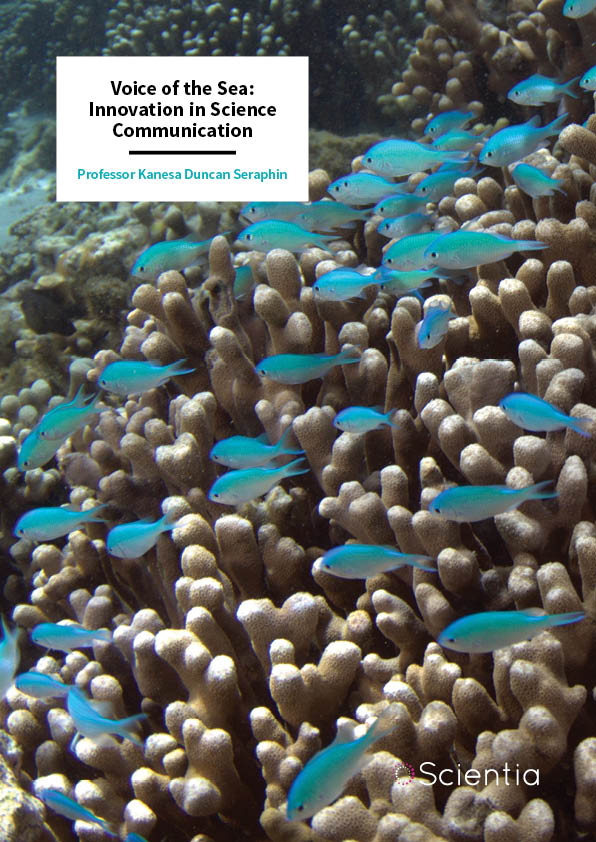 Episodes also feature specific behavioural goals, such as avoiding disposable plastic containers, respecting seaside vegetation, choosing to eat at ocean-friendly restaurants, and finding value in the science, environment and culture tied to the ocean. As viewers learn about the balance of the ocean’s ecosystems, they also learn about ways they can help preserve and protect it. 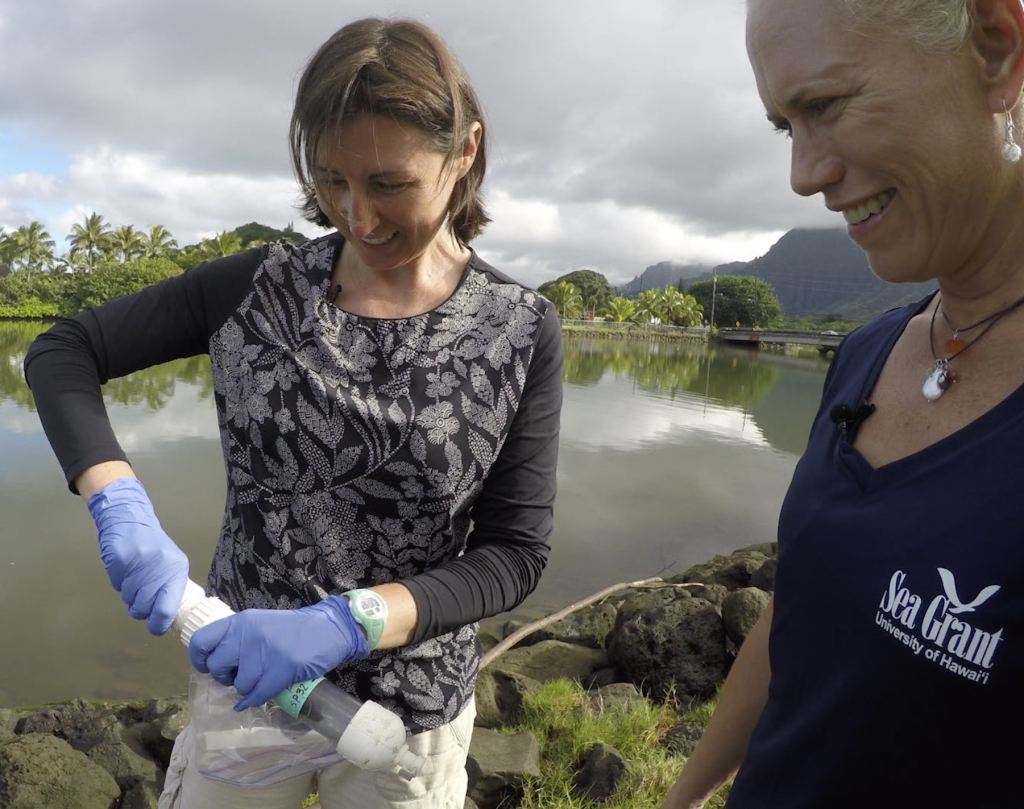 The 30-minute series began airing weekly on Sundays on a local Hawaiian channel in 2014, after Dr Seraphin and colleagues received institutional support from the UH Curriculum Research & Development Group and the UH Sea Grant College Program, which is dedicated to innovative marine science programs. Now in its fifth season, the series airs twice a week in Hawai‘i and is also broadcast across numerous US territories in the Pacific.

Voice of the Sea is available to approximately 90% of the Pacific region’s 1.8 million people, and episodes are available online, further increasing the series’ potential reach. The series has also partnered with educational venues in Hawai‘i, where it is played in exhibits, and clips are incorporated into the Exploring Our Fluid Earth (grade 6-12) and Sea-Earth-Atmosphere (grade 3-5) ocean science curricula, which provide free educational content online. 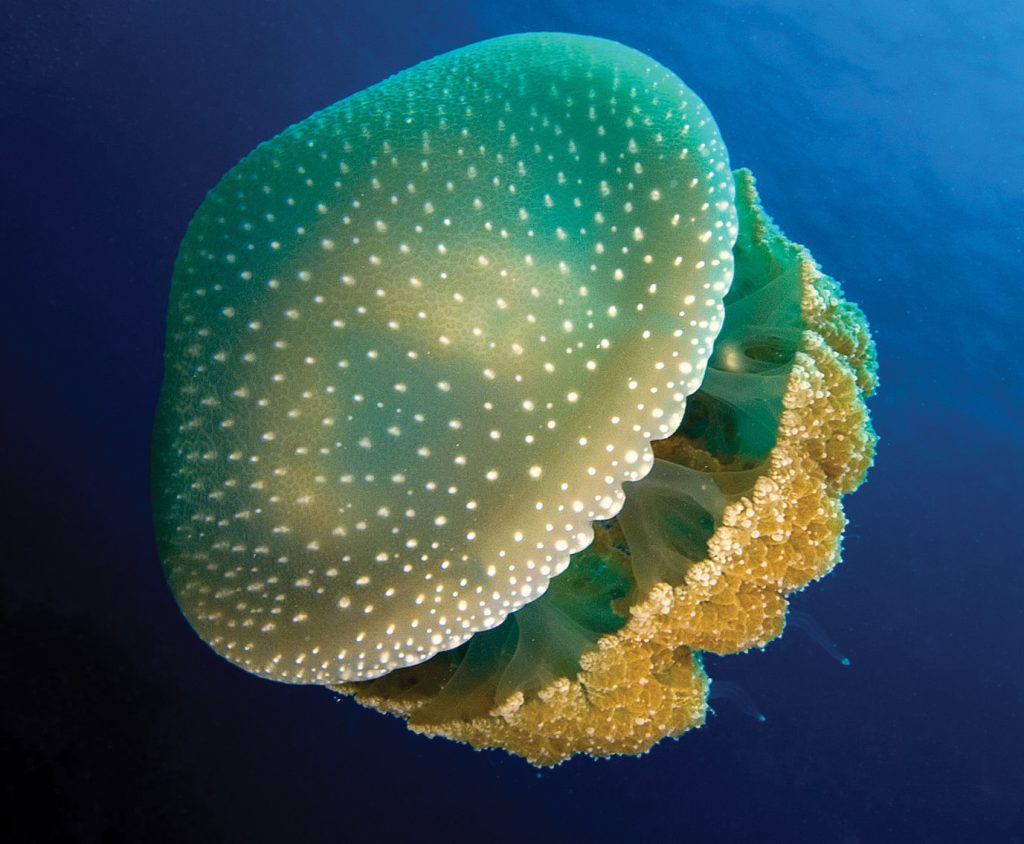 As it has grown, Voice of the Sea has become a true science communication success story. Targeted at community members that would not typically be reached by traditional science outreach, the series is bringing marine knowledge to a wide audience, including a loyal following of Hawai‘i residents. In questionnaires, viewers of all ages have indicated that watching an episode not only increased their understanding of and interest in the topic, but also increased their interest and likelihood to adopt suggested behaviours that support ocean health.

A viewer survey indicated that approximately 25% of the series’ audience plans to engage in suggested actions, demonstrating that the series has potential to positively impact its viewers. The series is now seen as a trusted source of marine science and over the past four years has received 16 national Telly Awards for outstanding regional television programming. The series is such a shining success that Dr Seraphin has been invited to join the 2019 Telly Awards judges panel. 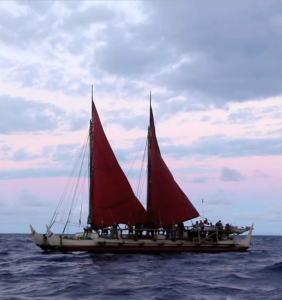 The series’ quality is made further evident by its growing viewership. When Voice of the Sea first took to the air in 2014, it was watched by roughly 2,500–5,000 people per week in Hawai‘i. In 2016 that number had grown to 8,000–10,000 weekly viewers, and in 2017 the series experienced massive growth, jumping to over 27,000 people watching the initial weekend airing. With at least four re-runs for each episode, it is estimated that over 100,000 people view each episode in Hawai‘i alone. Further, each week the series also runs 30-second TV promos that are both enticing and informative, providing information even to people who never watch the full episode. Partner TV station broadcasts in the outer Pacific increase the series’ potential reach by another 300,000.

Since Voice of the Sea was added to YouTube in March of 2017, it has garnered over 3,000 subscribers and 251,000 views. The series’ online growth has been completely organic – no marketing has been employed to gain this online following. Dr Seraphin and her team have only recently begun exploring ways to market the series online, such as Facebook ads, and are working to develop a strategic marketing plan that can maximise this innovative science program’s reach around the globe.

Dr Seraphin explains that, ‘we would like to grow our TV audience into new markets and to grow our online audience in various platforms and formats.’ As the series finds new viewers, the Voice of the Sea team hopes to increase understanding of marine environments and help viewers identify ways that they can help keep the ocean a little healthier. 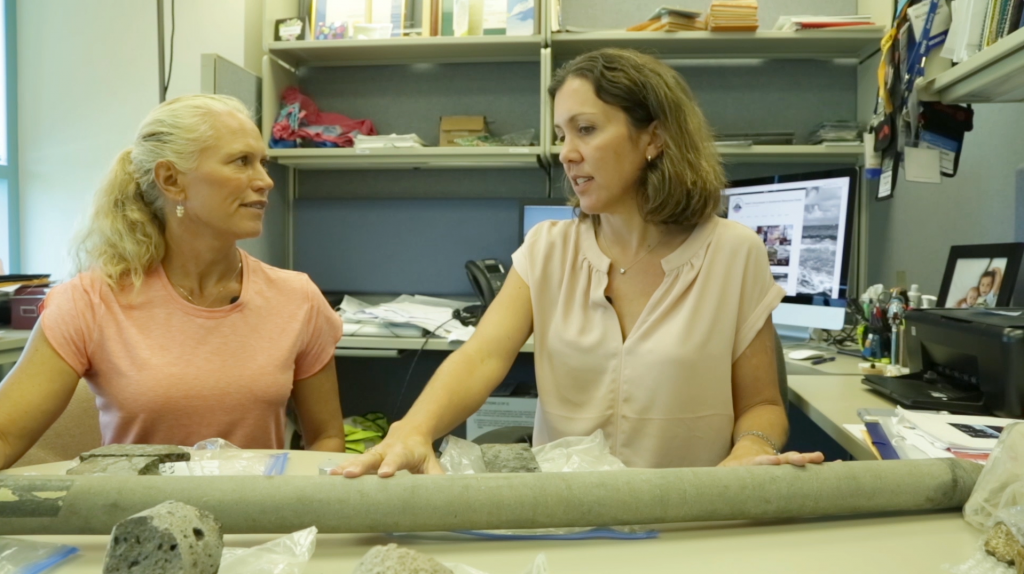 Beyond the difficulties of effective science communication, another key science challenge currently facing the United States is finding ways to increase enrolment and diversity in science, technology, engineering and mathematics (STEM) careers. Students’ choice of major when entering university studies is often limited by their awareness and perception of available professional options within a field.

Ocean science, particularly in areas of oceanography, physics and engineering, struggles to recruit a diverse range of students, due to factors that include (1) lack of scientist role models, (2) limited availability of career guidance from adults who are knowledgeable about ocean science careers, and (3) conceptions about scientists that don’t match students’ own culture or demographic. Public perceptions of scientists in general are flawed, with scientists commonly viewed as unrelatable and unbelievable.

Moreover, the portrayal of STEM professionals on network TV often does more to solidify stereotypes and misconceptions about scientists than it does to break them. Medical and criminal dramas frequently rely on situational plot twists or unnecessarily glamorised lab tests rather than hard data and logic to solve cases, inaccurately representing much of the science performed and portraying results as open to interpretation. 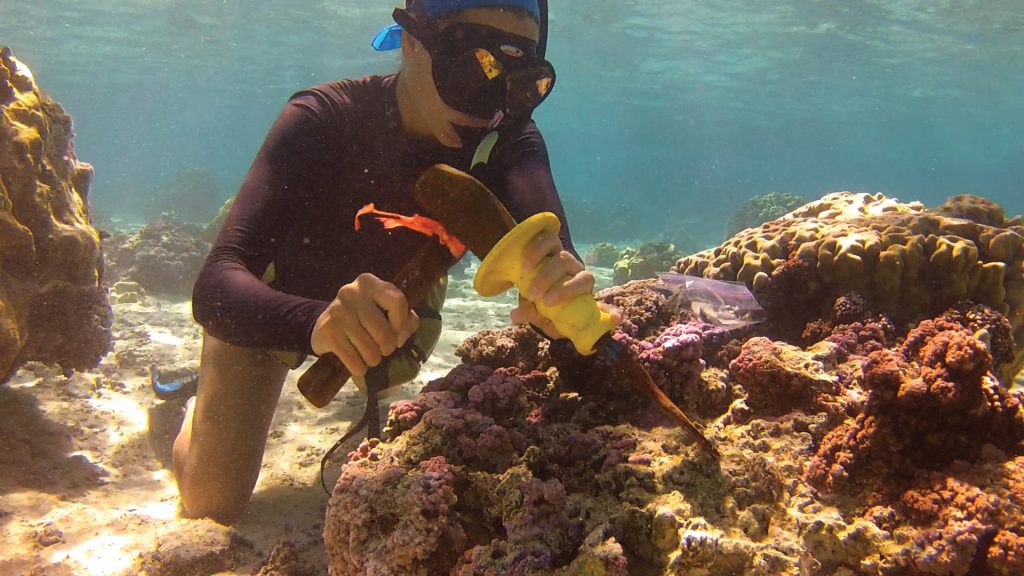 At other times, the science presented is entirely made-up, with lasting negative effects on viewers’ perceptions of scientists and the process of science itself – as in the 2013 fake stories of Megalodon on Discovery and the 2012–2013 mermaid mocumentaries on Animal Planet (which represented both series’ most watched episodes to date). Further, STEM TV characters are seldom diverse, with the majority portrayed as older white men or sexualised young women. As such, the limited representations of STEM portrayed on television do little to aid in closing the diversity gap in science.

On the other hand, when purposefully constructed, exposure to STEM careers through video and TV can enhance public awareness of what scientists actually do and can encourage students to pursue STEM careers. Showcasing scientists of numerous cultures, ethnicities, age and gender increases STEM interest in diverse populations. Thus, another major goal of Voice of the Sea is to expose viewers to diverse voices and career paths in ocean science and to provide grounded perspectives of marine science and related professions. The series aims to show that science can be engaged in by people of all combinations of ages, genders, ethnicities, cultures and levels of education.

The series’ hope is that by demonstrating the diversity in ocean researchers and promoting real-life heroes, they can stimulate the next generation of scientists to be even more diverse. Dr Seraphin describes how, ‘Voice of the Sea expands viewers’ perceptions of how and by whom research is conducted, providing career connections and engaging the community in societal issues.’

In a recent questionnaire study, Dr Seraphin’s team found that viewers of the series expressed affinity for the experts featured, suggesting that episodes are successful in showcasing scientists as relatable and enjoyable people. 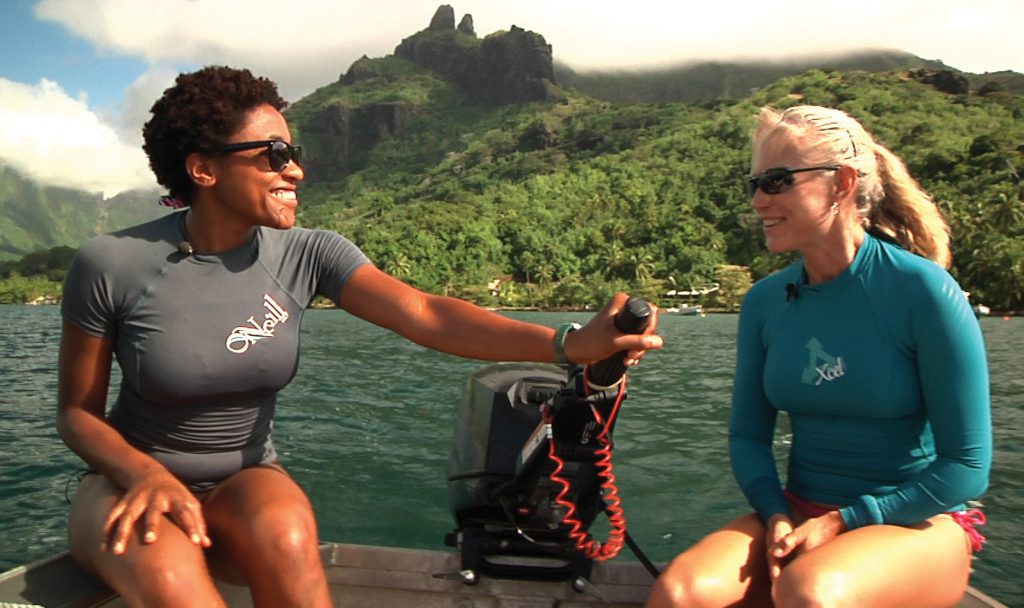 Voice of the Sea has become a beacon of science communication and outreach for the people of the Pacific, and Dr Seraphin and her team plan to leverage the series’ current success for an even greater future. As they attract funding from sponsors, the team is planning to expand creative marketing and research efforts to not only reach more people but also to identify even more effective ways to communicate topics and encourage viewers to take action.

‘We are looking to tell new stories in more engaging ways and to better the technical and artistic aspects of the series,’ Dr Seraphin describes. ‘We are working to increase audience engagement and to better understand the extent to which viewing Voice of the Sea influences knowledge, attitudes, and behaviour.’ 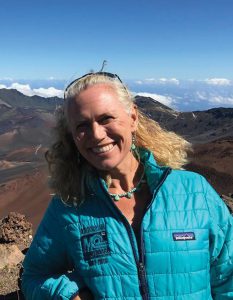 Dr Kanesa Seraphin is a professor with the University of Hawai‘i (UH) Sea Grant College Program, in the School of Ocean and Earth Science and Technology, at UH Mānoa. She is also Director of the Sea Grant Center for Marine Science Education as well as the producer and host of the Voice of the Sea television series. In addition to a BS in biology, MS in zoology, and PhD in zoology studying scalloped hammerhead sharks, Dr Seraphin has received a post-baccalaureate education certificate in secondary science education, and a secondary science credential for the state of Hawai‘i. Her work focuses on making ocean science education accessible to everyone, through her television series, free online curriculum and citizen science projects.