Pesticides may be essential in ensuring abundant and healthy yields of many crops, but so far, the techniques used to spray them have led to considerable environmental damage. In his research, Dr Mark Gleason, a plant pathologist at Iowa State University, assesses the performance of new technologies that can deploy pesticides on apple trees in more efficient and less hazardous ways. These approaches enable farmers to minimise pesticide use without sacrificing crop yields. Through combining laser-based ‘LiDAR’ (light detection and ranging) technology with disease-warning systems to time sprays efficiently, his project team hopes to offer more sustainable and environmentally friendly options for apple growers.

No matter where in the world they live, farmers are all too familiar with the catastrophic damage that can be unleashed by pests, including insects, and pathogens such as fungi and bacteria. To safeguard the stability of food production chains while securing the livelihoods of these farmers, effective pest control is crucial.

Pesticide spraying is a widespread and long-established practice for growers of specialty crops, including apples. These chemicals are specially designed to target and disable pests and pathogens. Today, a wide variety of technologies are available to spray pesticides quickly, easily, and inexpensively over expansive areas. These technologies include so-called ‘airblast’ sprayers, which use fans to push sprays into canopies of perennial crops, such as apple trees, nut trees, and grape vines.

However, pesticide sprays also have unintended consequences. Since pesticides can’t discriminate between harmful and non-harmful organisms, they can harm or kill innumerable organisms that benefit crops and play vital roles in the local ecosystem. To make matters worse, some pesticide spray fails to hit its target and drifts in the wind, potentially landing on farmers, farm workers and neighbours – endangering people’s health and prompting lawsuits. As growers, researchers and consumers become increasingly aware of these risks, the call for more sustainable pesticide application techniques is growing urgent. 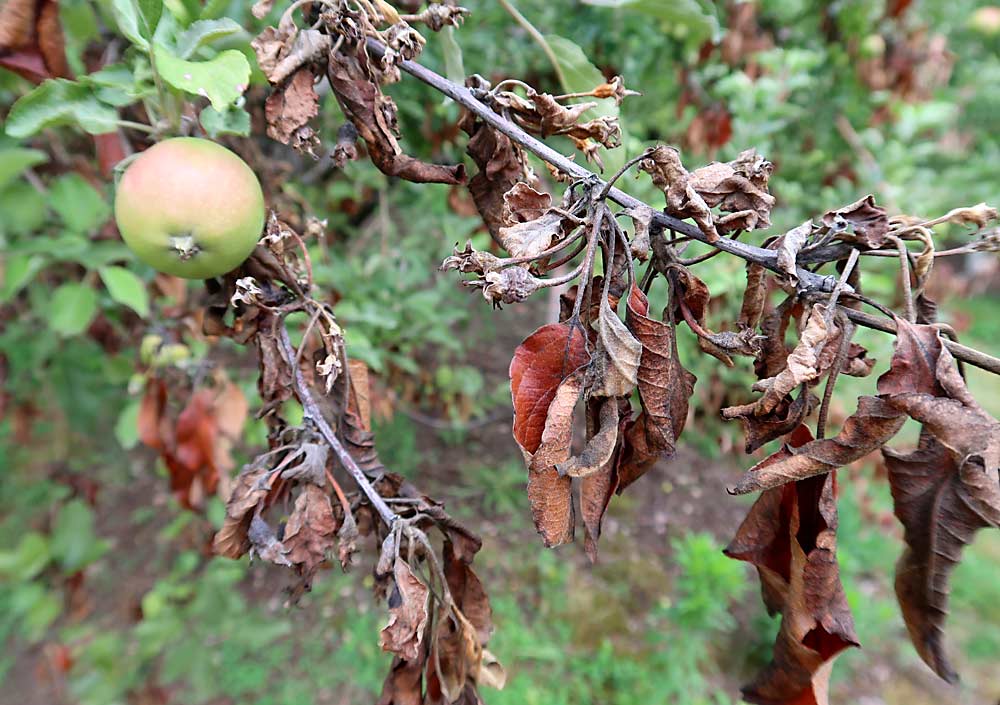 The overarching problem with existing spray techniques on tree and vine crops is that they deliver pesticides across entire fields – including where there are no trees or vines. This means that offtarget pesticides seep into the ground, where they cause pollution and can kill beneficial organisms in soil, ground water, and surface waters. Aerial drift can carry pesticide particles far beyond the boundaries of the field or farm. Pesticides are sometimes referred to as ‘cheap insurance’, but pesticide sprays that fail to hit their target waste money. Remarkably, more than half of the droplets sprayed from airblast sprayers miss their targets. Alongside the significant environmental damage this can cause, inefficient use of pesticides also incurs significant costs for farmers, forcing them to spend more of their income on chemicals. Thus, the need for more precision and accuracy in pesticide spraying is urgent from many perspectives.

Agricultural engineers have begun to embrace this challenge. At the Application Technology Research Center of the USDA’s Agricultural Research Service in Wooster, Ohio, Dr Heping Zhu and his technician, Adam Clark, overhauled airblast sprayers – whose technology had changed little in the past 60 years – using tools of precision agriculture. To do so, they mounted a ‘laser scanning sensor’ (the same LiDAR technology used in driverless cars) on the airblast sprayer.

This technology operates by firing laser beams toward the crop. The beams bounce off crop surfaces and are reflected back to a sensor. By analysing the reflections, Dr Zhu’s team built up highly accurate 3D pictures of the sprayer’s immediate environment – for example, a canopy of fruit trees. 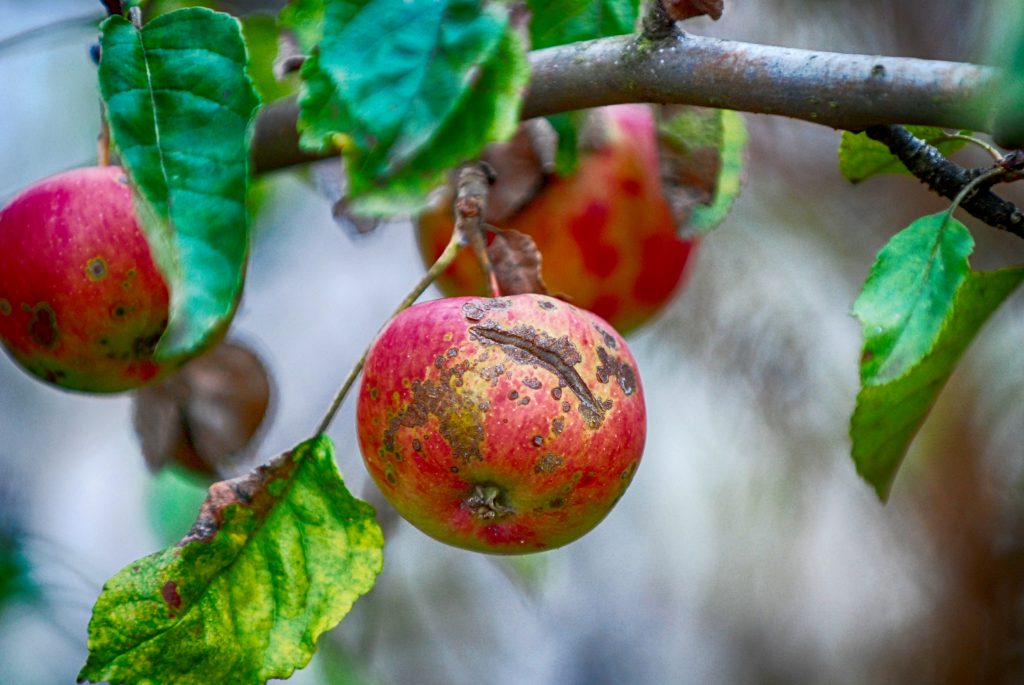 As a tractor drives the sprayer between rows of trees, a computer calculates the size, density and position of the trees – thus triggering the nozzles to spray pesticides with precise timing and pinpoint direction. This automated visioning and control system makes a huge difference in spray efficiency – reducing the amount of pesticide volume needed per hectare by 30 to 70%, depending on the size and type of tree canopy – meaning much less waste and environmental hazard. Dr Zhu’s Intelligent Sprayer is now available in the commercial marketplace.

But does it control insect pests and diseases as effectively as the standard airblast sprayer? Earlier field trials in a range of perennial crops – tree nurseries, raspberries and blueberries, and pecans – gave encouraging preliminary results.

But what about apples? That’s where Dr Mark Gleason of Iowa State University (ISU) comes in. In a threeyear project focusing on apple pest and disease management, Dr Gleason is collaborating with Dr Zhu, an Ohio State University plant pathologist, Dr Melanie Lewis Ivey, and an ISU economist, Dr Wendong Zhang. Their project expands on the spray-saving idea by combining the Intelligent Sprayer with another innovative strategy called warning systems. 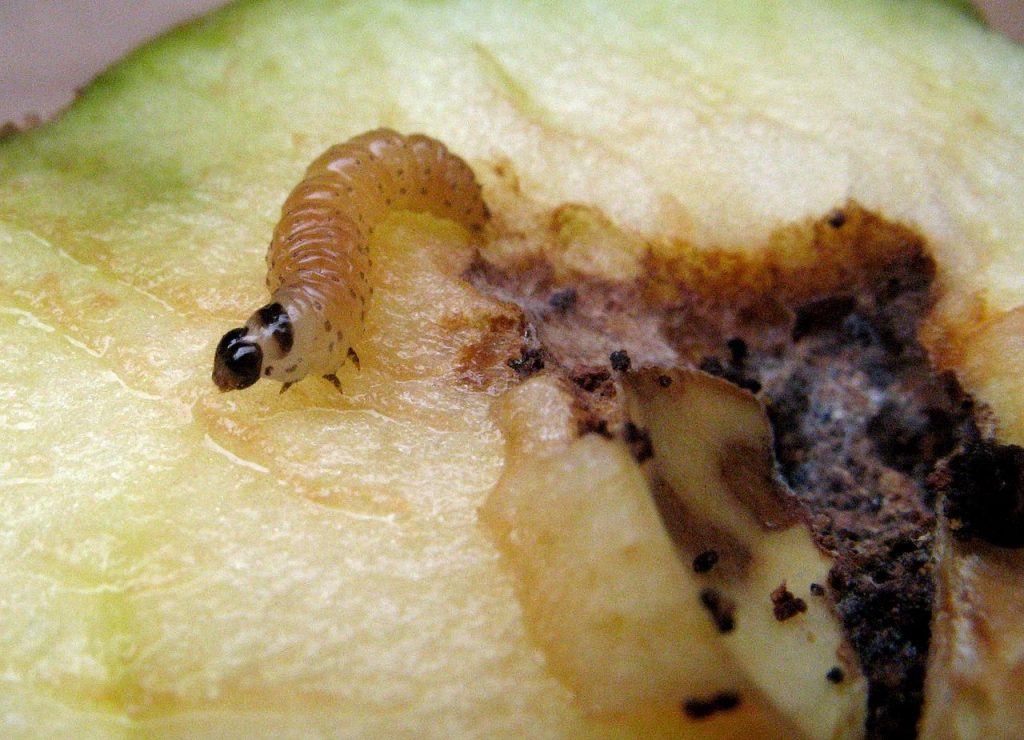 The Intelligent Sprayer is a major leap forward for pesticide application because it directs spray only where it’s needed, leading to far less waste per application. However, Dr Gleason and his collaborators are seeking to complement this technology, and allow farmers to make fewer sprays per season, while still protecting their fruit crops.

They proposed that they could achieve this by integrating a disease-warning system with the new spray technology. A warning system processes environmental information – about the weather, the pest, or the crop – to recommend spraying only when it’s essential to avoid a damaging outbreak. Warning systems are a radical departure from traditional pesticide spray timing, which depends on pre-set dates rather than daily risk assessments.

Here’s an example. In 2017, Gleason and his colleagues at ISU developed a warning system for an apple disease called sooty blotch and flyspeck, which causes fungal blotches on fruit. The warning system used a simple yardstick: the number of hours with a relative humidity of 90% or more since the last fungicide spray. When the total reached 385 hours, it was time for another fungicide spray. Apple growers could use this warning system to save an average of 2.3 fungicide sprays per year – a 25% reduction – compared to traditional calendar-based spray timing, with no added risk of a disease outbreak. 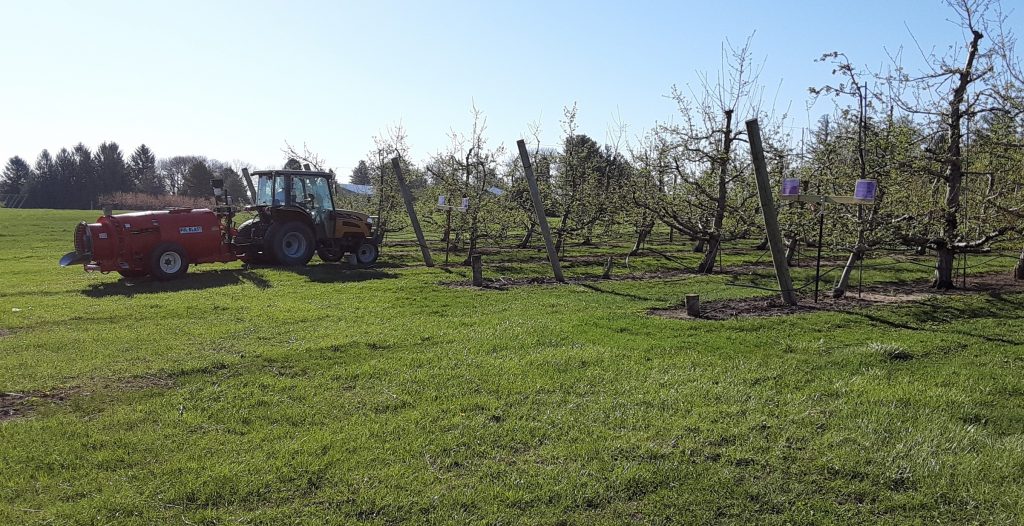 How far can we shrink pesticide spraying without endangering an apple crop? This question drives Dr Gleason’s current project. By combining the Intelligent Sprayer, which involves a lower spray volume per application, with warning systems that allow routine spraying to be avoided when disease or pest risk is low, it may be possible to maximise pesticide efficiency while minimising its risks.

In field experiments in Iowa and Ohio, Dr Gleason, Dr Ivey, and their graduate students, Olivia Meyer and Lianna Wodzicki, have been comparing this combination to each strategy by itself, and to traditional grower spray practices and equipment. The focus is on spray savings, but also on the effectiveness of disease and pest control.

Some of the key practical questions surrounding this dualtechnology project are economic ones. For example, under what type of orchard scenario would an Intelligent Sprayer be profitable, and how soon would a grower recover the cost outlay? How would warning systems impact profitability? Dr Zhang and his graduate student Nieyan Cheng are currently putting together an economic analysis to help apple growers evaluate whether they want to adopt the new strategies. An Advisory Panel of commercial apple growers from Iowa and Ohio meet regularly with Dr Gleason’s project team to keep the project grounded, and the team, led by ISU Research Associate José González, is sharing the results with growers throughout the Midwest via podcasts, blog posts, videos, a website, and field days.

An apple with sooty blotch and flyspeck.

In the coming decades, unprecedented changes to the Earth’s climate and ecosystems will present farmers worldwide with many new risks. Dr Gleason’s project addresses these challenges by applying technology to minimise the health and environment risks caused by off-target and unnecessary pesticide spraying, and to safeguard growers’ profits. Beyond apples, the project’s findings could be relevant to many other key food crops that currently receive high pesticide loads, thereby paying dividends for food security, environmental quality, and agricultural sustainability. 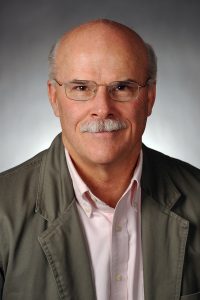 Dr Mark Gleason holds two PhD degrees – the first in Environmental Sciences from the University of Virginia, and the second in Plant Pathology from the University of Kentucky in 1985. Now a Professor in the Department of Plant Pathology and Microbiology at Iowa State University, he specialises in research on several major fruit and vegetable crop diseases. The scope of his research covers the genetics and evolutionary biology of these pathogens, and is also leading to new ways to detect, manage, and prevent them. Dr Gleason also teaches a broad range of university courses, on topics including Integrated Pest Management, ecologically based pest management, tropical agriculture, turfgrass disease management, research ethics, and professional speaking skills. He has published more than 200 research papers, and has received several awards for his important work, including the Outstanding Achievement in International Agriculture at Iowa State University in 2012.