The Society for Developmental Biology is successfully increasing the diversity of undergraduates wishing to pursue careers in developmental biology through a programme called Choose Development! 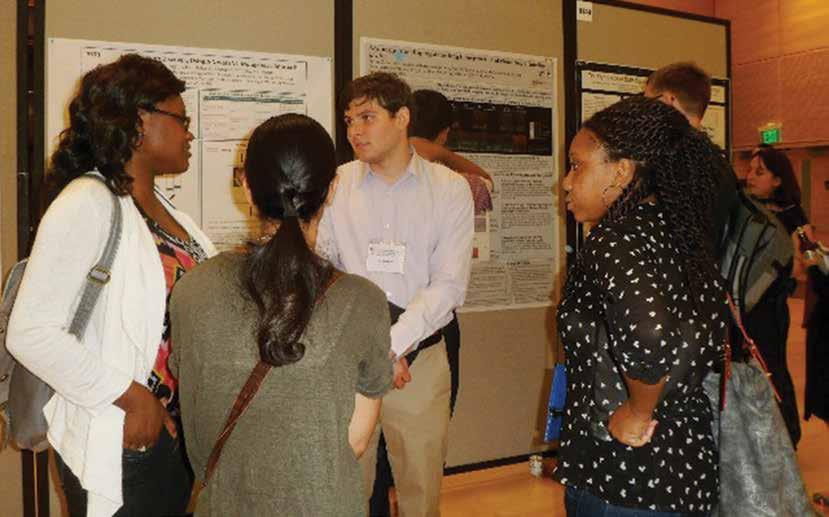 Lack of diversity in science

A 2011 report published by the National Academy of Sciences, National Academy of Engineering and the Institute of Medicine highlighted the lack of diversity in Science, Technology, Engineering and Maths (STEM) disciplines. Under-represented minorities (URMs), including African-Americans, Hispanics/Latinos and Native Americans, hold only about 6% of STEM-orientated jobs, despite making up 29% of the US population (1). One of the major issues is the lack of URMs completing university education – URMs make up 33% of all secondary graduates, yet this drops to 26% when considering students enrolled in undergraduate courses, and worse, 18% when considering students that complete STEM-oriented degrees.

One of the main reasons cited for the low number of STEM graduates is that URM students fail to see themselves as successful scientists, due to insufficient mentoring, peer support, and a lack of role models and support from their community (2). This highlights a self-defeating cycle, whereby the low percentage of URMs in the STEM workforce discourages further URMs from studying STEM subjects. However, URMs represent a massive untapped talent pool for future scientists. In addition, multiple studies have shown that increased employee diversity is associated with increased creativity and productivity (3). The demographics also predict a significant increase in URMs in the US population in the near future.

Drs Graciela Unguez, Ida Chow and Karen Bennett are a trio of scientists with backgrounds in developmental biology. When asked what drew each of them to the field of development, Dr Unguez responds that ‘the well-known capability of all organisms – plant and animals – to modify their cells, tissues and organs in order to better adapt to changes in environmental conditions has been, to me, the most exciting developmental process of a fully “differentiated organism”’. Similarly, the big question that drew Ida Chow to developmental biology was ‘how does one cell, the fertilized egg of all organisms differentiate and develop into such complex and beautiful structures?’. Dr Bennett tells us that the application of developmental biology to medical therapy is what drew her to the field: ‘I was attracted by and am still extraordinarily proud of the exciting future of our field in terms of stem cell research, disease remediation, and understanding the process of life’.

In addition to their research contribution to the field, the trio also has a strong background in outreach, owing to their involvement with the Society for Developmental Biology (SDB). Dr Chow has been involved in multiple National Science Foundation (NSF) funded collaborations between the SDB and the Latin American Society for Developmental Biology. All three are also part of the SDB Professional Development and Education Committee, which has developed initiatives such as the Boot Camp programme to provide important skills to early-career scientists (4).

A few years ago, the team recognised the lack of diversity within their own organisation (as in many other US science organisations) – URMs made up only about 10% of the Society, compared to 29% of the US population. They also knew that typical programmes targeted at URMs in the past have been slow in impacting the demographics (despite high initial participation) because these opportunities largely depend on very short-term exposure to the sciences. As Dr Chow describes: ‘It has been known and documented that students from currently under-represented minority and under-served populations, students with disabilities (visible and invisible) and from economically disadvantaged communities need continued mentoring and for longer periods, to encourage and cultivate their interest for science and research (2). Unfortunately, most of the existing programs for these students are one-time deals, raising their interest but not providing continuity to sustain and increase their participation in science’.

These facts spurred the trio to develop a long-lasting approach to increasing diversity within the Society. Together, the team developed a programme called ‘Choose Development!’, and secured $285,000 of NSF funding under the BIO-Integrative Organismal Systems’ ‘Broadening Participation’ initiative (5). ‘The two main goals of the programme are to increase the number of URM undergraduates and students with disabilities entering graduate programs in developmental biology and progressing to independent positions, and to increase and retain the number of SDB members from the URM and persons with disabilities populations by at least 25% of the current figures (72 of 681 survey respondents) by the end of this Choose Development project funding period’, Dr Chow tells Scientia.

The Choose Development! programme brings a fresh approach to increasing URM representation in science. The programme scouts for talented URMs in their undergraduate studies, and brings them under the wing of enthusiastic mentors from the SDB – talented scientists who can offer inspiring environments to learn about science and developmental biology. Moreover, to retain them in the field of developmental biology over the long term, SDB offers Choose Development Fellows the support of a community throughout their university degrees and beyond.

Once chosen, programme participants (Fellows) do a summer research project with their mentors. The next year they attend the SDB annual meeting to present their work, develop their professional skills, and build relationships with developmental biologists at all stages of their careers. SDB Fellows are encouraged to do additional summer internships throughout their undergraduate studies. Participants have had the opportunity to work at a number of institutions across the US, including, for example, San Francisco State University, The University of Puerto Rico, Princeton University, the University of Utah, New York University and Memorial Sloan Kettering Cancer Centre. In addition, a fortuitous partnership between SDB and the historic Embryology Course at the Marine Biological Laboratory in Woods Hole, Massachusetts has enabled two Fellows per year to spend one week at the course expanding their knowledge of developmental biology experimental techniques and diverse embryonic systems.

The integration of participants into the SDB community gives them a strong identity and sense of belonging within the Society and sets them up for their careers in science. As Dr Bennett describes: ‘SDB Fellows, as our selected students are called, do more than summer lab work; they are recognized and have an identity in our Society and throughout the field of developmental biology. Along with working in the laboratories of successful scientists during several summers, each Fellow is brought to the annual meeting with one of their mentors, is highlighted throughout the meeting with videos of their work, and is received both at an SDB Board reception and at the Awards Banquet. In the past three years our SDB Fellows have bonded with one another throughout the meetings and through social media, and have been extraordinarily successful in being accepted into prestigious graduate programmes’.

The benefits of the programme work in many ways. Not only do the Choose Development! Fellows benefit, but their mentors also gain valuable skills. Along with the mentoring provided by the lab head, the SDB Fellows are also assisted by a designated lab mentor. As Dr Chow describes: ‘Our multilevel mentoring has not only helped the students, but also provided learning and training experience for the laboratory mentors, mostly postdoc fellows who will one day have their own labs and will need to mentor students’. The programme provides mentors with a 2-day workshop, and continual assistance from ‘Master’ mentors. The trio also hope that the programme will help translate science to communities, as their participants are encouraged to perform outreach activities.

The Choose Development! programme is completing its third year, and has successfully obtained bridge funding for a further two years. As Dr Unguez notes: ‘students becoming a member of a team to learn science, and being welcomed into an entire scientific society by its members, is an extremely doable accomplishment in building [an inclusive scientific] community’.

The success of the programme is reflected in the results – Fellows showed greater learning across many aspects compared to the average student population (using the Grinnell College SURE III (Survey of Undergraduate Research Experiences) and interviews). Gains were especially noticeable in defining career paths, understanding scientific literature, and oral presentation. One of the most positive effects of the programme was an increased willingness of participants to take part in research again, and this is exemplified by the number of programme participants who are now enrolled in postgraduate programmes (five out of nine who have already graduated), medical school or working in laboratories – an encouraging result for the future of URMs (and the Choose Development! programme) in the SDB.

Throughout these three years, the number of URM trainee members in SDB has increased by about 20%, in part as a result of active promotion of the Choose Development! Programme, and recruiting potential candidates at URM-targeted meetings, in addition to within the SDB membership.

The Future for Choose Development!

The team behind Choose Development! is hoping that SDB members will take the programme forward by providing outreach to their communities, and further encouraging URMs to take part in the programme and STEM subjects. They all agree that their main goals are to sustain this initiative with long-lasting funding, to improve the practices used by incorporating suggestions from the ongoing evaluations, and to establish partnerships with other scientific societies, universities and research institutions.

It is the hope of this team that the programme will inspire others and provide the basic groundwork for diverse scientific societies and organisations to implement similar programmes inspiring URMs. As Dr Unguez puts it: ‘Choose Development is a training programme that addresses all stakeholders in a scientific society and informs all members of the overdue necessity to widen the inclusion of young trainees into the biological sciences. The programme does not function in isolation, it reaches out to all members of our scientific society to participate, open their labs for summer training and open opportunities for graduate students and post-doctoral fellows to also include useful mentoring skills into their career toolbox’.

Indeed, similar pushes for diversity in science are being funded across the world – the UK has a similar focus in their ‘Leading the way: Increasing Diversity in the Scientific Workforce’ programme. By increasing the number of URMs completing science degrees, this talented team hopes to eventually bring equality to the STEM workforce, and uncover the massive untapped potential in minority communities. The team knows that the best way to do this is by providing a supportive community to URMs, and has facilitated its connections with the SDB to help make their programme successful and serve as a source of inspiration for others in science.

The Choose Development! programme is open to URM undergraduates or those with disabilities, who are US and Canadian nationals or permanents residents. Preference will be given to undergraduates in their first or second years of study. If selected, candidates may be required to travel within the US (assistance with travel and accommodation is provided).

Those wishing to mentor as part of the Choose Development! Programme must be SDB members who hold research grants, and can provide sufficient capacity and training for a student, including a lab mentor (either postdoc, lab manager, or advanced graduate student). People interested in partnering with SDB or becoming a Choose Development! mentor or fellow are invited to contact Dr. Chow.

The Choose Development! programme was created by a collaboration between three key members of the Society for Developmental Biology: Dr Graciela Unguez, Dr Ida Chow and Dr Karen Bennett. Dr Graciela Unguez is the Principal Investigator and Professor of Biology at the New Mexico State University, with a subject focus on the development and regeneration of electric fish tissues. Dr Ida Chow is the Co- Principal Investigator of the project, Executive Officer of the Society for Developmental Biology, and a Fellow of the American Association for the Advancement of Science. Her previous research focused on the formation of neuromuscular junctions in the frog. Dr Karen Bennett is the Program Coordinator and an Emerita Professor from the University of Missouri, with a subject focus in nematode developmental biology. In addition to their research, they coordinate the Choose Development! programme, and are also involved in the Society’s Professional Development and Education Committee. 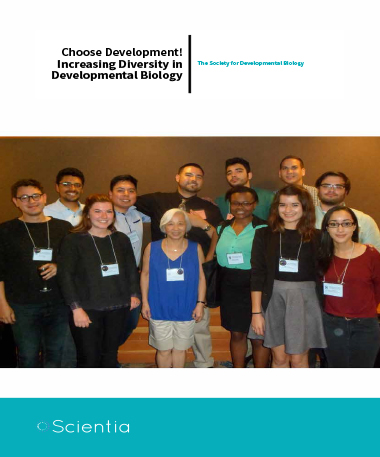